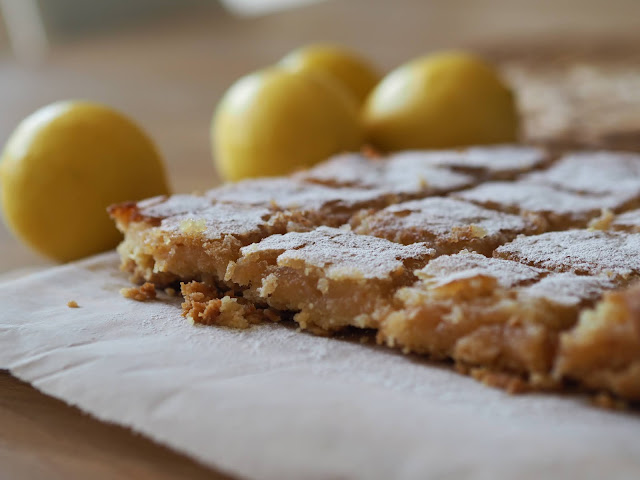 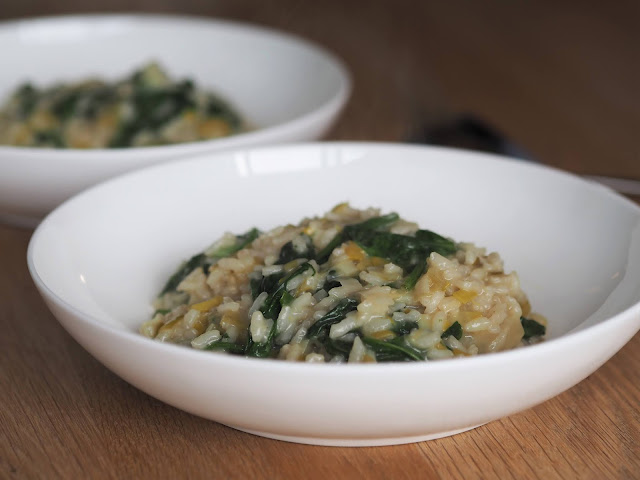 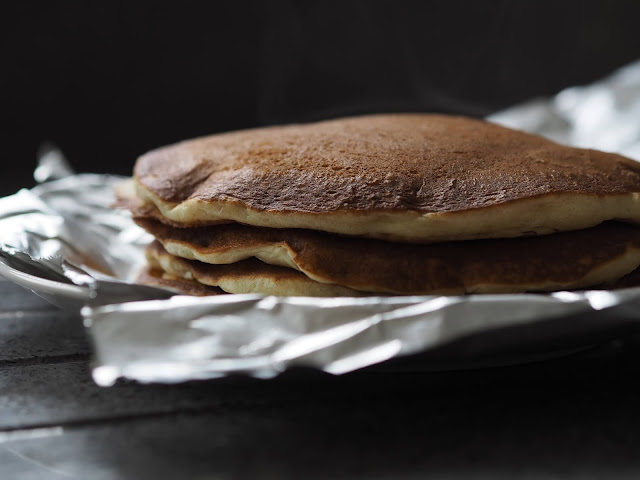 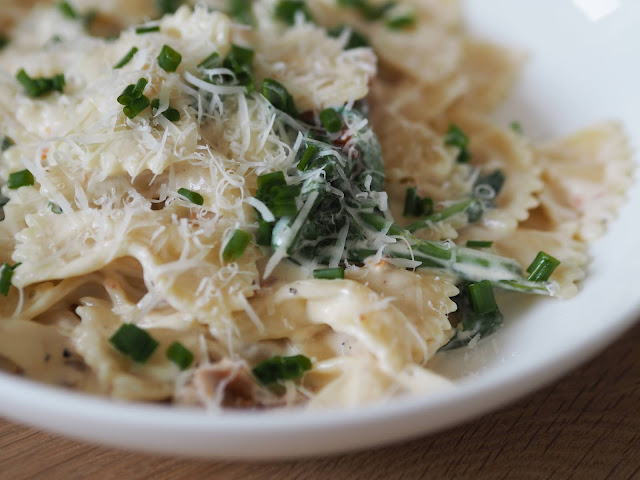 I feel like I went on a holiday around the US with this book. I bought a new cookery book a few weeks ago, Magnolia Table

by Joanna Gaines. I think she's pretty well known in the US but I first heard of her when I stumbled across the American DIY/Home Improvemennt TV programme Fixer Upper one night, and was instantly hooked. In the programmes, she and her husband, Chip, renovate run down properties for clients - he is the builder while she does the interior design (which I really like by the way, she has a great eye) - and it's developed into the Magnolia business in Waco, Texas, with shops, restaurants, a bakery and cookery books too it appears. 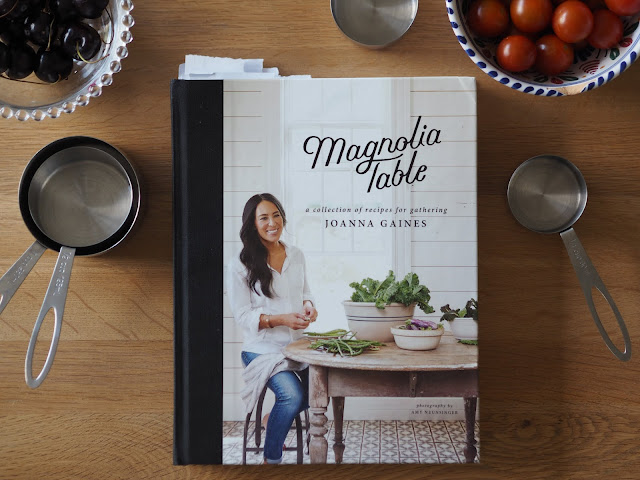 The thing about this book that you have to know from the outset is it's all in American terms, so weights are in cups, ounces and sticks rather than the metric measurements we use in the UK, and the ingredients have not been translated for a British market, so your courgettes are zuccini, your coriander cilantro, and so on. Some people might find this off-putting, even annoying, as there is a bit of translating to do as you read each recipe, but I saw it as a challenge and kind of relished it. I think there is something about cooking and cookery books that brings out my inner geek (not a lot does) and so I had a very lovely time indeed cooking from this book, which is beautifully put together with lots of photos and very clear instructions, plus a bit of history or context for each recipe, like if it was passed down from a family member. The breakfast chapter was large (and included a lot of food I consider lunch, like quiche) but I was really keen to try The Best-Ever Fluffy Pancakes. They are fairly similar to my normal American pancake recipe but include buttermilk, which makes them lighter I think. I feel traitorous to Nigella to admit this, but yes these pancakes were amazing. So light and soft, and the maple syrup soaked in making them almost cakey. I made them again this morning and they were just as good. 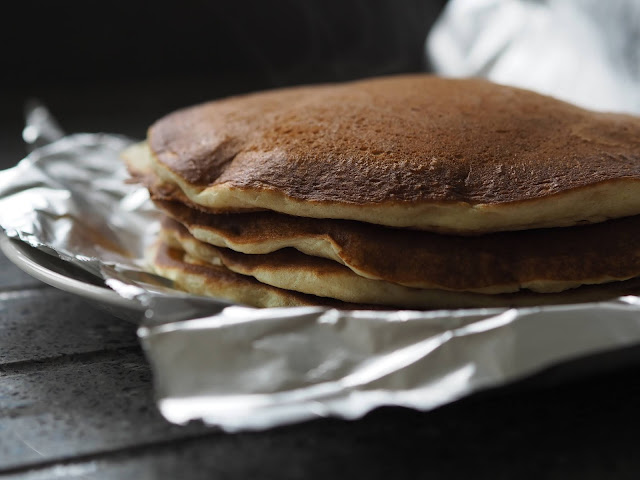 Next we tried Becki's Mac and Cheese, which differed a lot from my normal cheese sauce method. I usually make a white sauce, starting with a roux of butter and flour and adding milk, then add the grated cheese. Here, you cook the macaroni in one pan, and mix together milk, cream, butter, something called "Velveeta" (I just used cream cheese), cheddar and some seasoning in another, then you mix the drained pasta and creamy sauce together, pour into an oven dish and bake with more cheese on top. The amount of cheese it contained was staggering but it was so good, more like the kind of macaroni cheese you'd eat in a restaurant than at home. Probably because a restaurant macaroni cheese contains a lot more cheese and cream than one you'd make at home, now I come to think of it, but I do still dream about this dish sometimes. 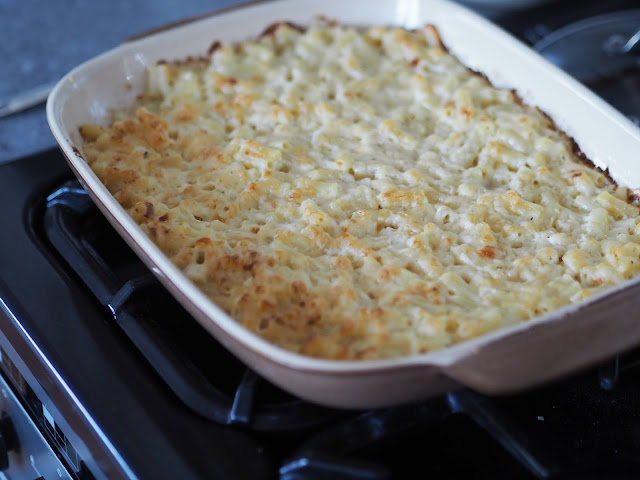 We ate it with Meat Loaf and a lot of green vegetables. I was really excited to try the meat loaf because I think it's one of those dishes that always seemed to feature in the American TV and films I watched growing up as a kind of nostalgic, homemade comfort food, and I always wondered what it was as a child. Well, it's basically a giant burger. It's minced beef and fried onion, breadcrumbs, an egg, some cheese and seasoning, all squished together  formed into a long loaf shape, drizzled with ketchup and baked. It was quite nice but didn't go down as well with John and the kids as I'd hoped. 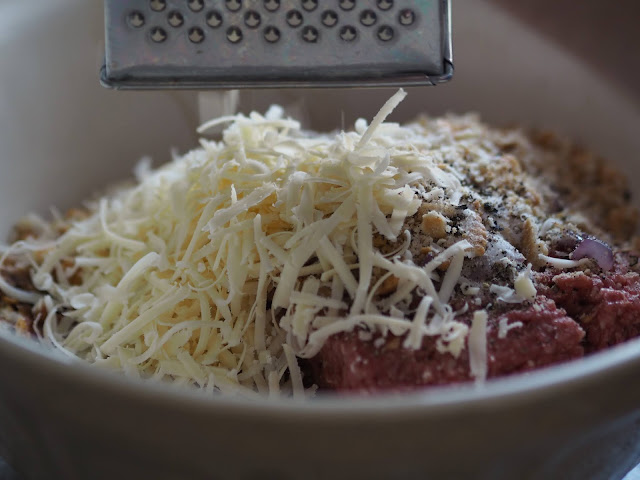 The appearance of my meatloaf may have had something to do with it, I don't know... 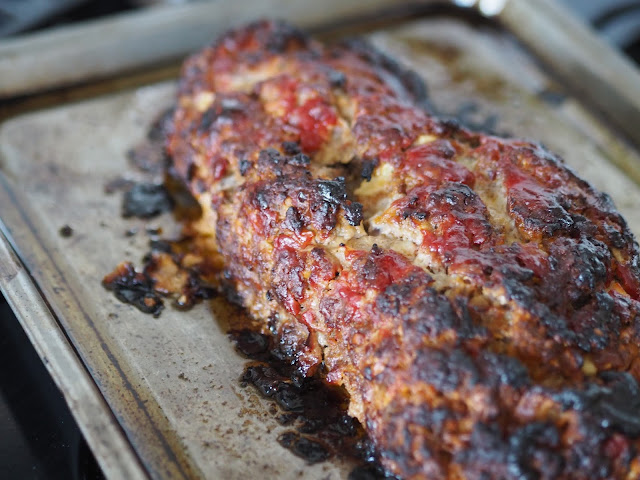 A much more successful family meal was Sour Cream Chicken Enchiladas. This was not how I make enchiladas (which is probably the wrong way, to be fair); here, you mix together a jar of enchilada sauce with a tin of condensed chicken soup and some sour cream. I couldn't find the exact kind of sauce specified so improvised with what they had on the shelf in Waitrose, and I have never used condensed soup in cooking before, although I know often people do in casseroles or slow cooker meals, so I was intrigued. You make up all your rolled tortilas containing chicken, peppers and a little cheese then, when they are all snug in their oven dish, pour all the sauce over the top and bake. The result is a creamier enchilada with a lot more flavour than the usual way I make it. 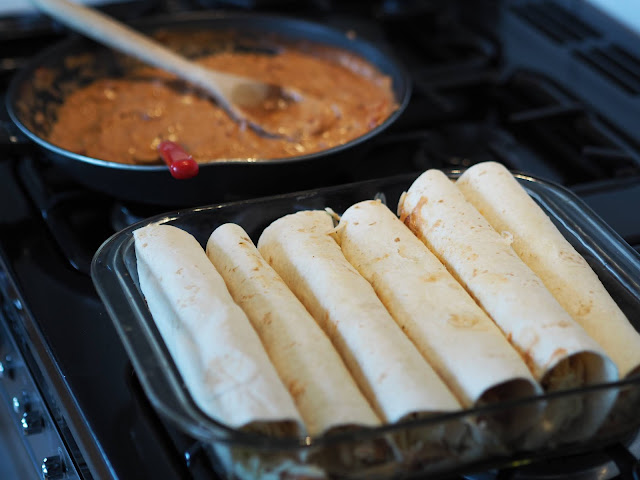 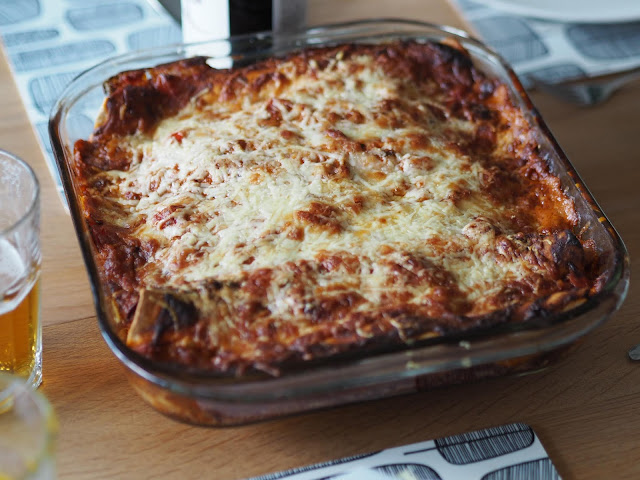 Another good find was Bow Tie Pasta, a really quick and easy weeknight dinner. While the farfalle is cooking, you saute some garlic then add cream and cream cheese to the pan, creating the base for your sauce. Then you add parmesan, loads of spinach and some sun-dried tomatoes and let the spinach wilt in the sauce, before mixing it all together with the cooked pasta. 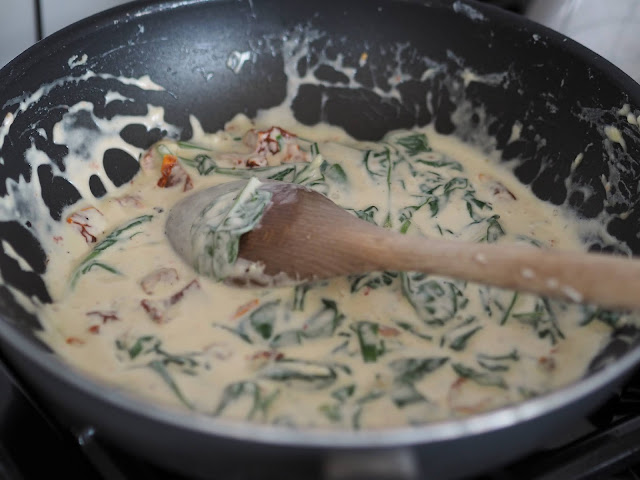 You were supposed to add artichoke hearts and garnish with walnuts but, knowing how those two ingredients would go down, I left those out, and it was well received by everyone, although Angus did pick out all his sun-dried tomatoes. 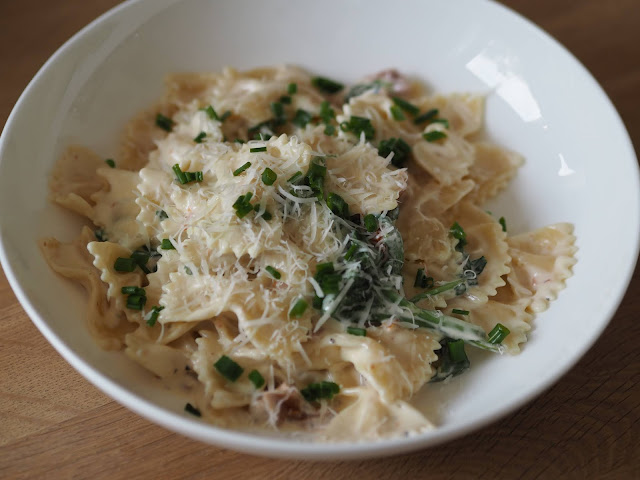 Bella and Angus don't like risotto, so one night when they were having something different - probably chicken nuggets - we tried the Fresh Spinach and Leek Risotto. It's a fairly standard risotto recipe, but uses leeks instead of onion, then at the final stage where you stir in the parmesan and butter, add lemon zest too. I loved it, John less so, although he did take the leftovers to work the next day for lunch so it can't have been that bad. 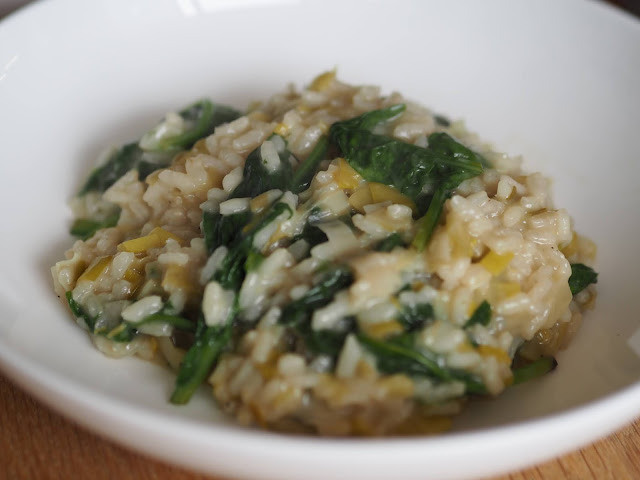 Now on to desserts and cake, always the best bit! I made Mina's Lemon Bars, which were a bit of a revelation. It's a simple biscuit base which is blind baked, then you top with sugar, eggs and lemon juice, and bake again. 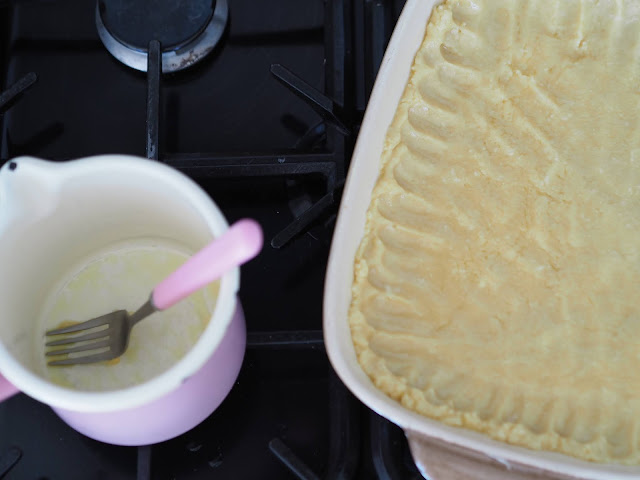 It's like all the best bits of shortbread, lemon curd and lemon drizzle cake all put together in a bar, and they were so good. However, I didn't grease my pan well enough and so the edges of the bars burnt and stuck on in a very unattractive fashion. 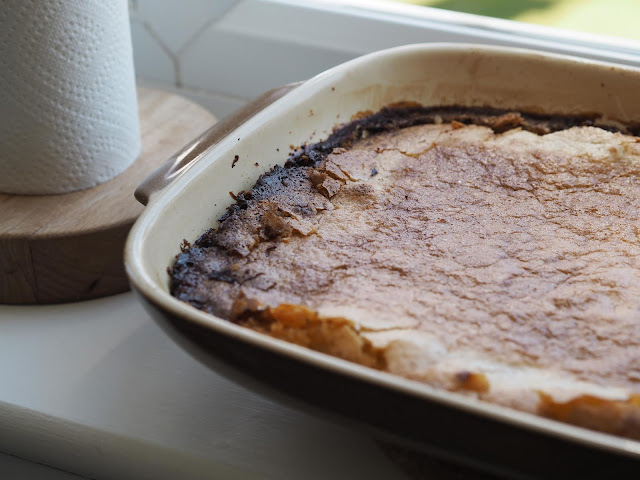 Hmmm, I thought, this doesn't look like the photo in the book. However I was able to chisel them out, cut off the burnt edges and they were ok, proving once again that dredging icing sugar over your baked goods always covers a multitude of sins. If I ever write a baking book it will definitely include lots of opportunities to cover your burnt cake in icing sugar, I feel it's my signature style. 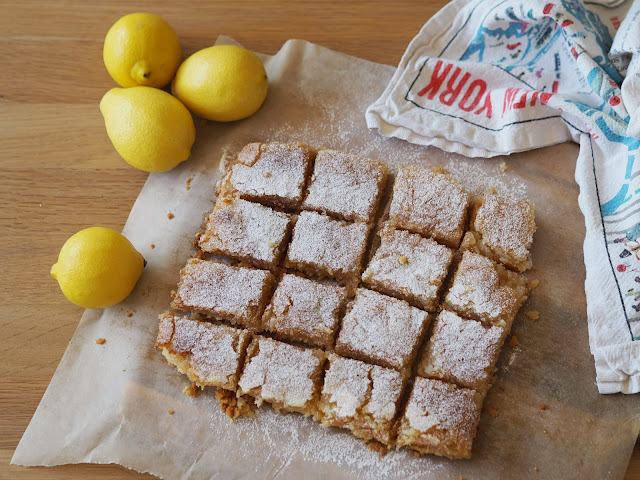 Finally we have Bevie's Chocolate Roll, which is a like a chocolate log or Swiss roll. You're supposed to fill the cake with "Cool Whip" before rolling but I have no idea what that is so used whipped cream. Once the cake is rolled, you put it in the fridge for a few hours so that it's really cold and firm. I didn't get this - cake straight from the fridge generally isn't very nice as it loses all it's soft airiness - until I realised that the cake is served cold with a jug of hot fudge sauce, which you pour over the chocolate cake. 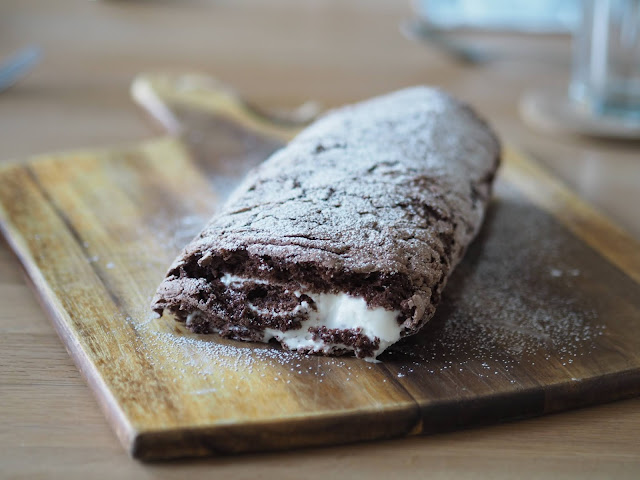 It is every bit as good as you imagine, and the kids said it had made it into their top three favourite puddings, which is quite some accolade.

So all in all a very good book. I liked the Americanisms, I like that it all felt a bit different to my usual cooking and made me try some new things. I've found some very good recipes here and had a lot of fun cooking from it, although I might lay off the cream for a while.

Thank you so much for all your good wishes for my career change. It was so heartening to hear so many of you had made similar changes and that you enjoy the job so much. I know it's going to be a very demanding year, and that's partly why I waited until both Bella and Angus were older, but I feel it will be worth it. I definitely plan to continue blogging, and cooking, crafting and everything else that I love to do, although it might be fortnightly rather than weekly.

So far we are having a lovely start to the school holidays and have been much busier than I'd planned, which has been unexpected but also wonderful. We've spent time with friends and family, enjoyed the weather, eaten out, explored our local area, gone to the beach....I will do a proper post soon.
Posted by Gillian Roe at Saturday, August 01, 2020