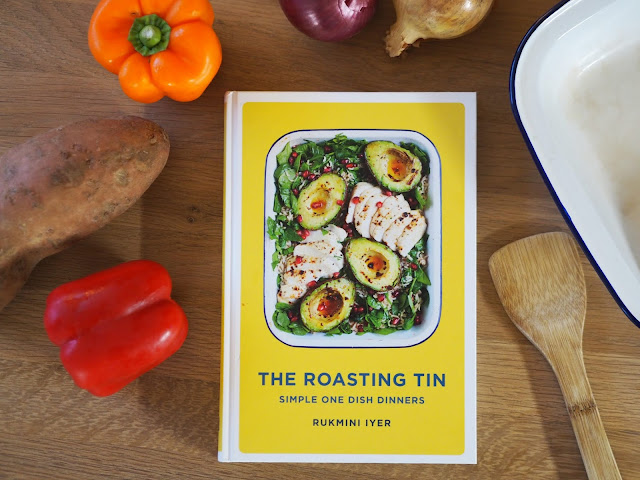 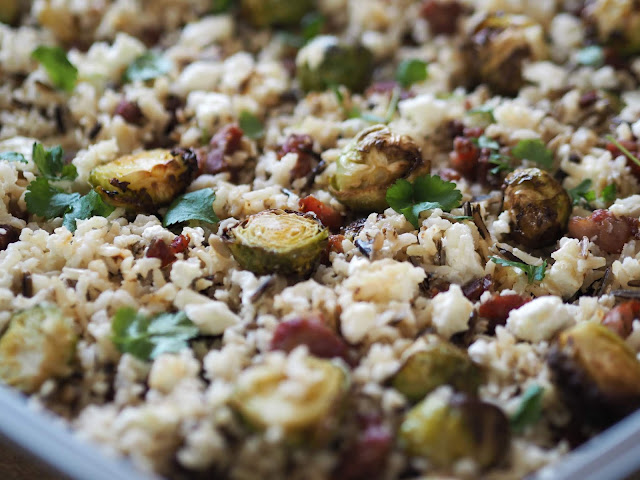 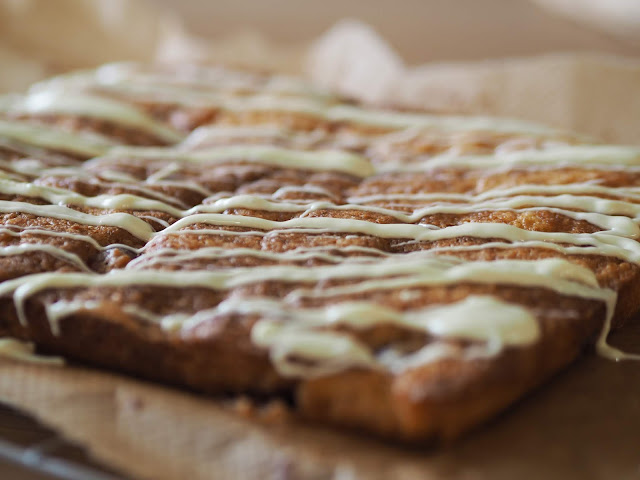 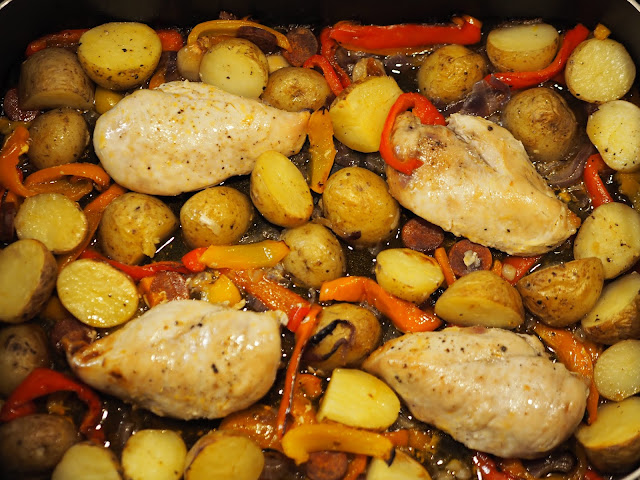 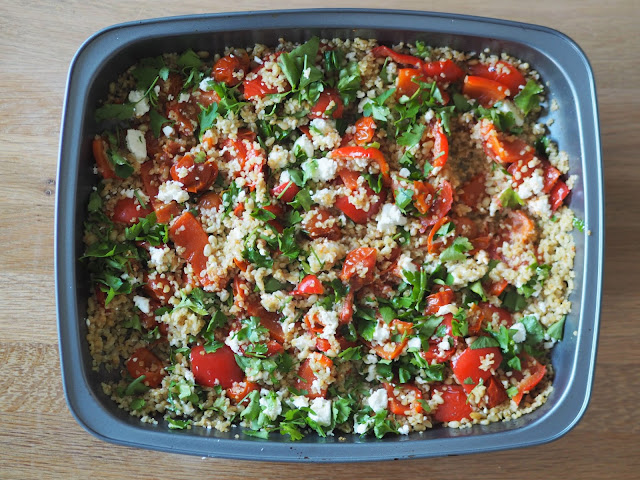 It feels funny to be typing the word December half way through January. It's not just last month, it's also last year but I was given this glorious book for Christmas, so I've only recently been trying out some recipes. The book is The Roasting Tin

by Rukmini Iyer. I asked for it for Christmas hoping that it would make my weeknight dinners easier, and it definitely has. The book's premise is that everything can be made in one pan, in the oven. Occasionally you need to cook some pasta or rice in a saucepan separately, to be added later, but for the most part it is a selection of meals and cakes/desserts which only need one roasting tin meaning, crucially, less washing up.

We tried two dinners, two salads and one cake, all of which were wonderful on the whole. 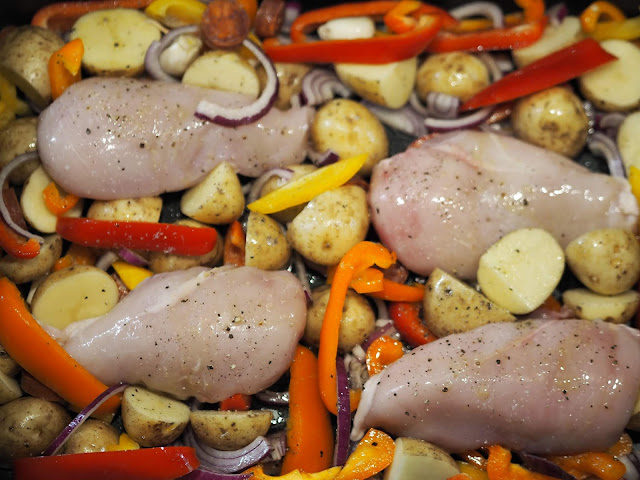 First we tried Simple Roast Chicken and Red Pepper Traybake. All things we like. Sliced red onions, garlic and peppers are cooked with chicken breasts on top. It's as simple as that. Concerned about the lack of carbs, I threw in some chopped potatoes, and a bit of chorizo that was hanging around in the fridge for good measure too, and baked it all for about 45 minutes. I was also concerned about the lack of sauce. Would it be dry? Would the kids want ketchup? But the vegetables release liquid as they cook which, mingled with the olive oil and juices from the chicken, makes for a delicious sauce. 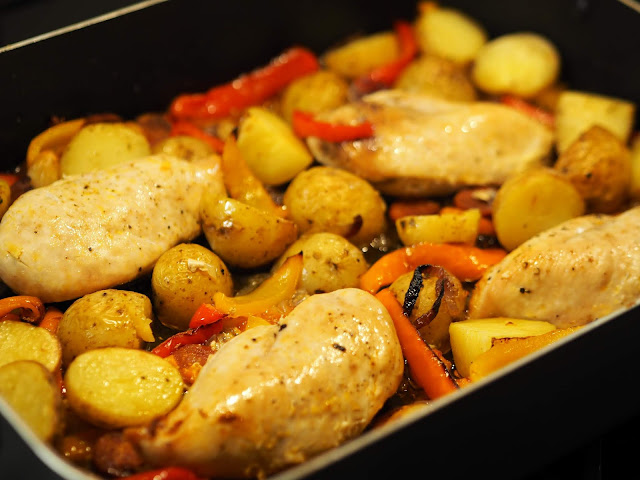 The chicken was incredibly moist, the potatoes were crunchy around the edges and it was all totally delicious. Bella and Angus loved it, as did John and I. This one is a keeper. My pescatarian sister tried a version with cod (adding the fish part way through the cooking time) and said it was really good. 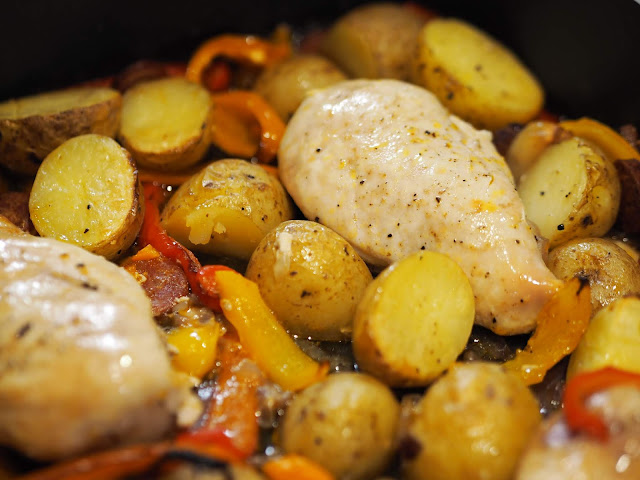 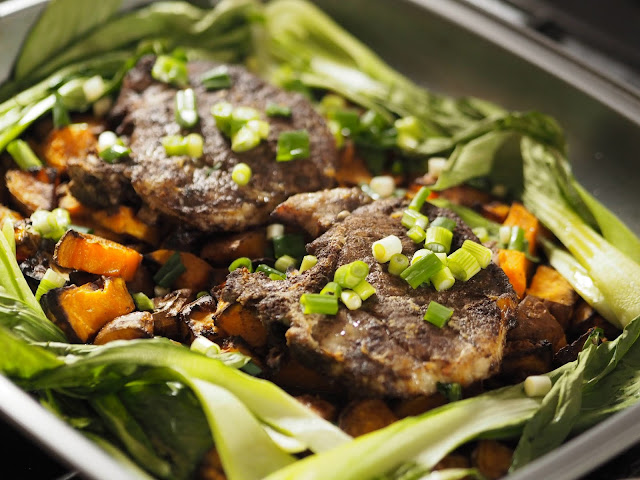 You roast diced sweet potatoes with ginger, garlic and star anise for twenty minutes while the pork chops marinade in sesame oil and Chinese Five Spice seasoning, then you add the meat, cooking for another fifteen minutes, adding pak choi at the end. 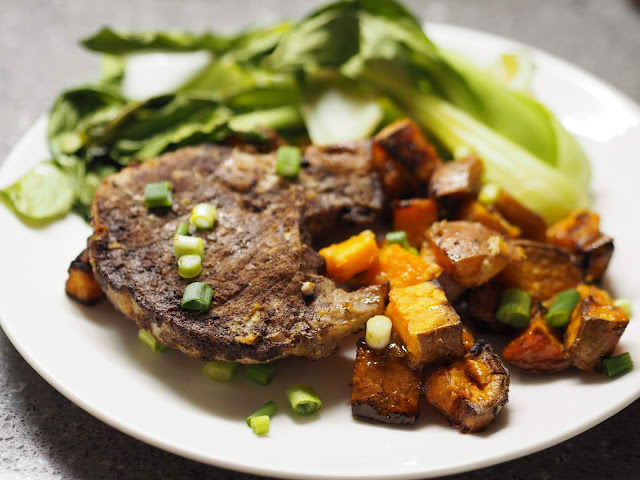 The flavours were incredible (I love Five Spice seasoning), the sweet potato going so well with the ginger and garlic, but the pork was a bit overdone, reminding me why I never buy it because I seem unable to cook it without it turning to leather.

The next dish I made the day before I went back to work to solve a leftovers situation in the fridge; a bag of sad looking sprouts and half a packet of pancetta which would be transformed into Wild Rice Winter Salad with Roasted Brusssels Sprouts, Pancetta, Feta and Sunflower Seeds. 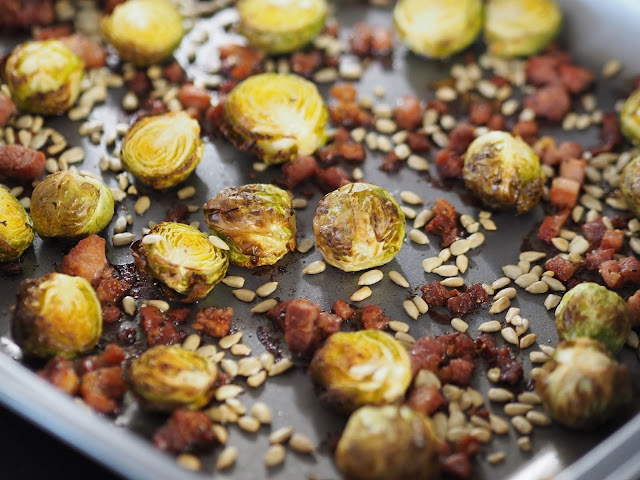 You roast the sprouts and pancetta for a bit before adding the seeds at the end. Meanwhile, boil some wild rice. 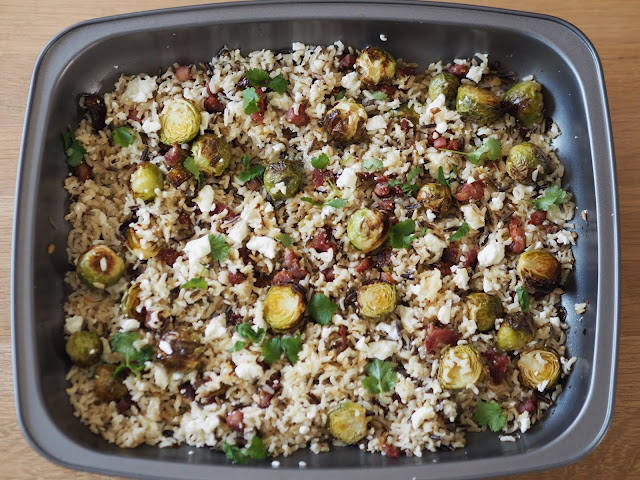 Then, mix the whole lot together, adding feta and lemon juice. We ate it warm for lunch that day, but I took the leftovers to work padded out with some extra baby spinach leaves. I had intended to eat it as a salad but it was so cold at work that I reheated the lot through in the microwave in the staffroom, feta and spinach and all. It was delicious, and I don't even really like sprouts. 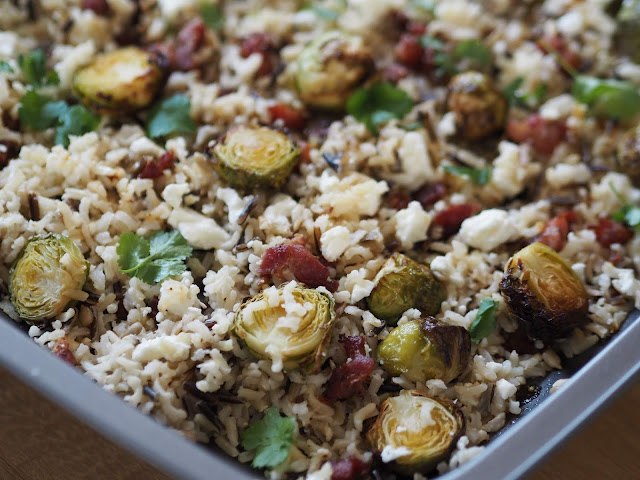 The next salad intrigued me for the way it was cooked: Bulgur Wheat With Roasted Red Peppers, Tomatoes, Feta and Pine Nuts. You chop the vegetables and roast, adding the pine nuts five minutes before the end. Now, I would usually cook the bulgur wheat separately, but you pour it straight into the roasting tin, adding the stock, then covering it with foil before returning to the oven. 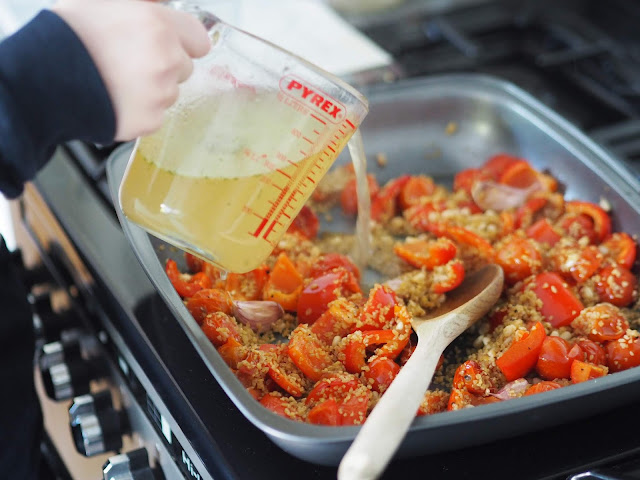 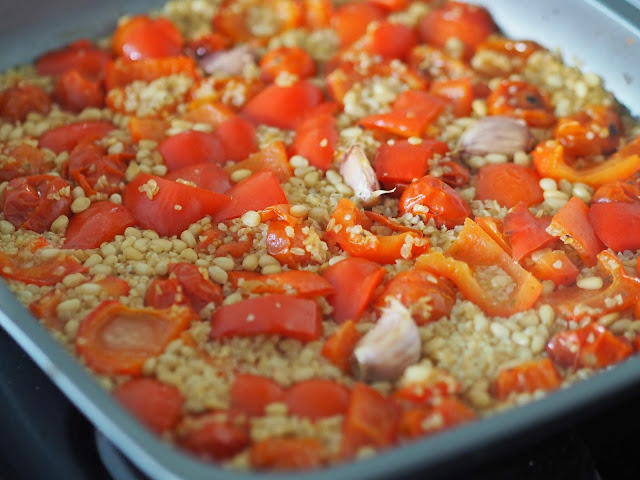 The parsley and feta are added last and it's meant to be eaten warm. I tried some, just to check it was ok, and had to stop myself shovelling the lot into my mouth. It's delicious. I have portioned up the rest to take into work for lunch this week. 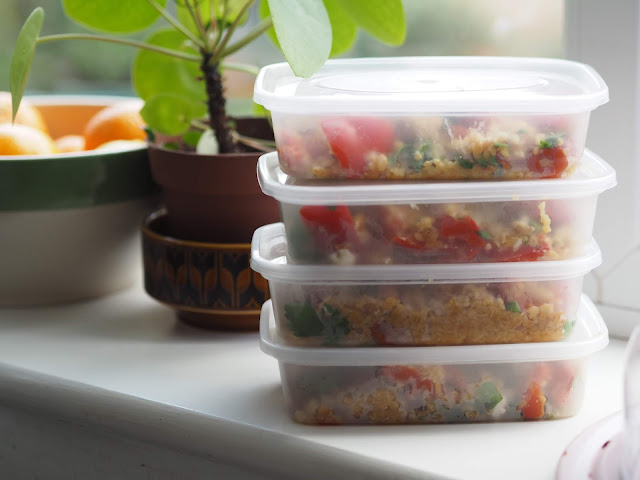 Finally, cake. It is supposed to be Coconut, Raspberry and Chocolate Cake but I made a few tweaks. I refuse to buy soft fruits like raspberries and strawberries in the middle of winter so substituted them for half a pot of glace cherries that I found in the cupboard, and reduced the amount of chocolate. Next time, I would leave the chocolate out altogether - the cake, with the coconut and cherries, doesn't need the sweetness and it's perfect as it is. The kids did not like it (the coconut) but John and I both though it was really good, moist and chewy. 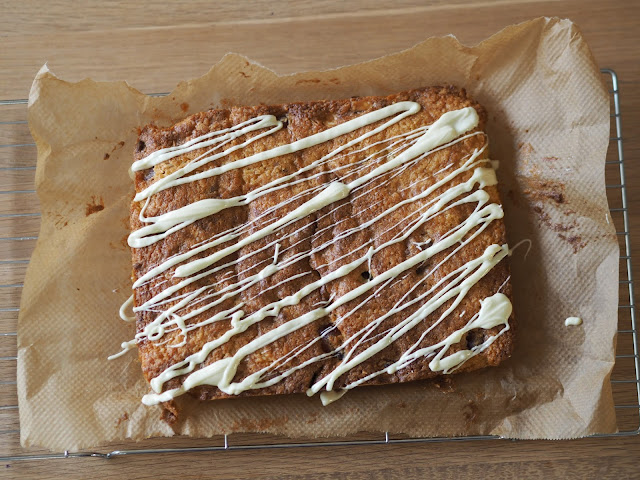 The reason this slice is such a mess is because I couldn't wait for the cake to cool down before I cut into it, and it all fell to pieces before being crammed into my mouth. I have a weakness for glace cherries... 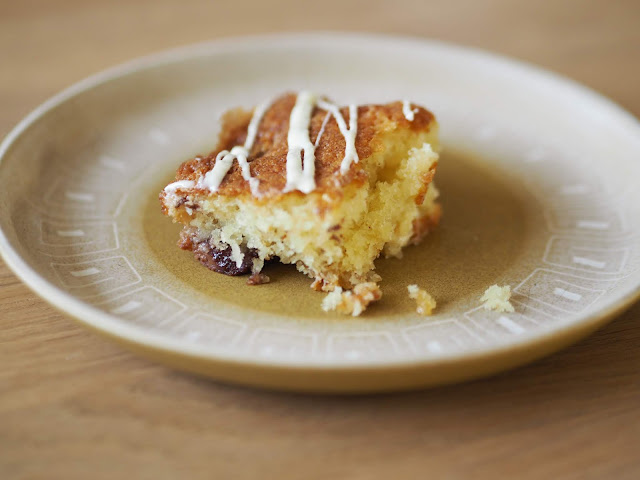 There ends my 2019 Cooker Calendar Challenge, where I choose a book each month from my shelves and give it a bit of love. 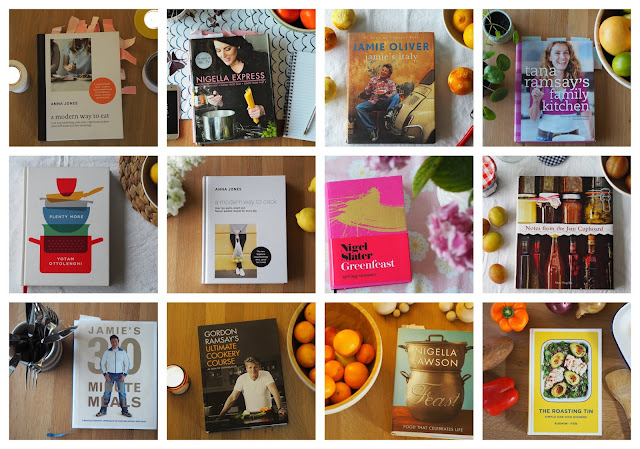 I will be giving this challenge a rest for a while; after three years of doing this every month, thirty six books in all, I have given my cookery books the attention they deserve and have run out of unloved titles to choose from. Cooking, however, I will never give a rest. I may have to buy more cookery books.