My Holiday Embroidery Diary So Far 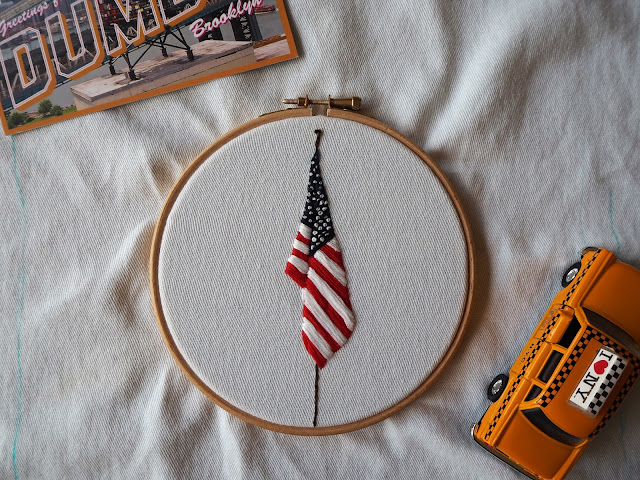 Hello there! I teased you a few posts ago with a glimpse of the first motif I sewed for my embroidery holiday diary and thought you might like to see a little more of the progress I've made over the last few weeks.

For those who might be new here, I should explain: five years ago, in Cornwall, I decided to sew a little embroidered holiday diary, one image a day, as a memento of our holiday, and because I love to sew - that bit probably goes without saying. Two years ago, in France, I did another, again with an image or motif for each day we were there, and was able to sew most of it on holiday. I knew that I would definitely - definitely! - want to create something similar for our recent holiday to New York but that A. one motif a day would be impossible, and B. sewing anything on holiday was out of the question. So what I have a list of memories that I want to include, and a very rough plan sketched onto a piece of paper,

Once I'd done the central flag and the writing at the top and bottom, I began filling up the space with some images. I am trying to balance out shapes and colour where I can, but also choosing the position of the images as I go, so it's not that planned really.

Next I sewed the "red white and blue waffles" I ate at the Comfort Diner for no other reason than I just really wanted to embroider waffles. 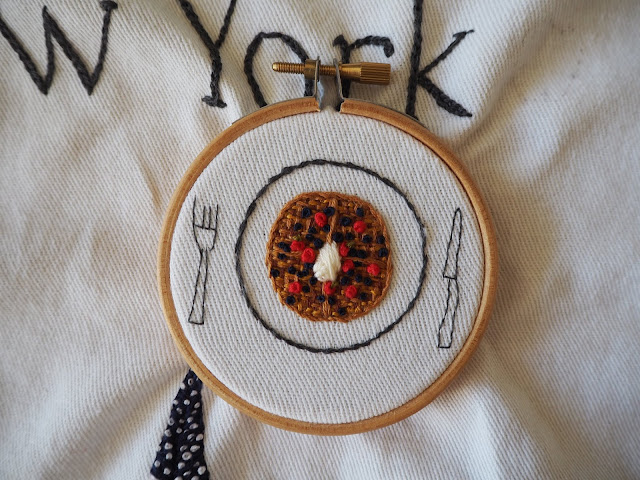 Followed by one of my favourite motifs on this embroidery, the Statue of Liberty. Now, I am aware that we didn't actually make it to the statue this holiday, but I have been a couple of times before and it's so iconic and associated with the city of New York that I just couldn't leave her out. 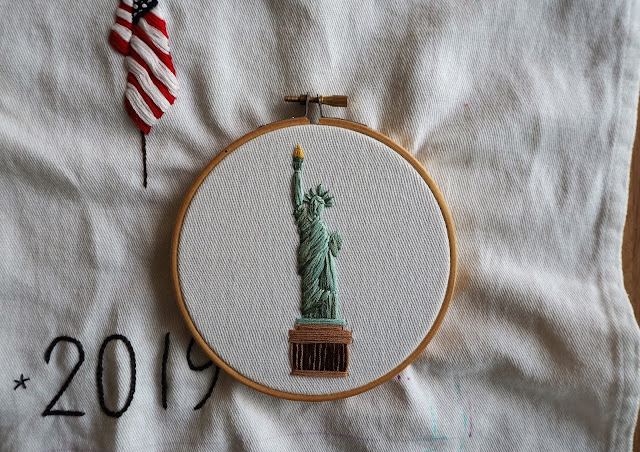 I was really nervous about this one so I looked at lots of different images online and then sketched the design onto paper first, then traced it onto the white fabric using a fading pen. Next I chose a few embroidery silks in what I hoped would be the right colours, then I started stitching using mainly satin stitch but letting the different colours overlap each other. 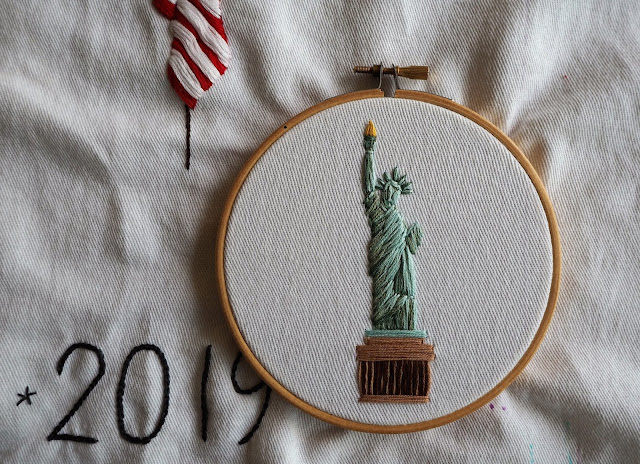 The impressionistic style is maybe best viewed from further away rather than close up, but I'm happy with the overall shape and colour.

I needed to balance the Statue of Liberty out with another tall, thin shape on the other side of my embroidery, so chose the Empire State Building, again sketching, tracing and then choosing colours. 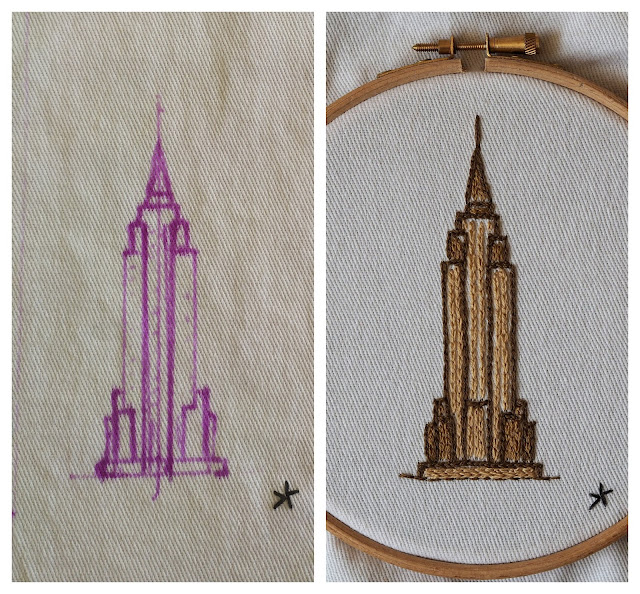 I chose chain stitch here to try and give an impression of all those windows. 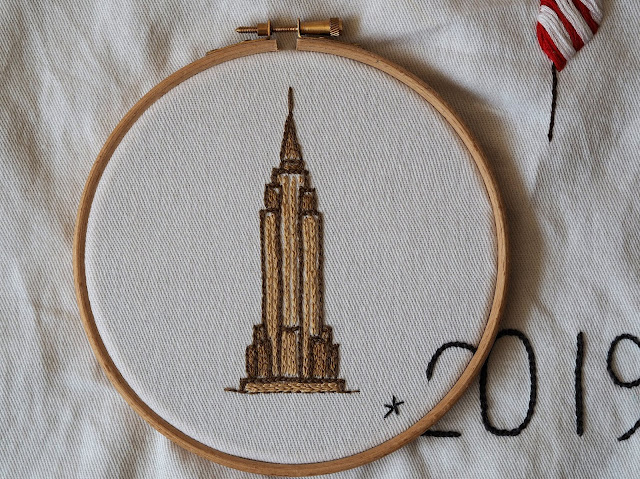 A bowl of ramen next, something we ate a lot there because it was cheap, easy and delicious. I drew this one free hand and so enjoyed filling in the top with noodles and vegetables and sewing that tiny egg. 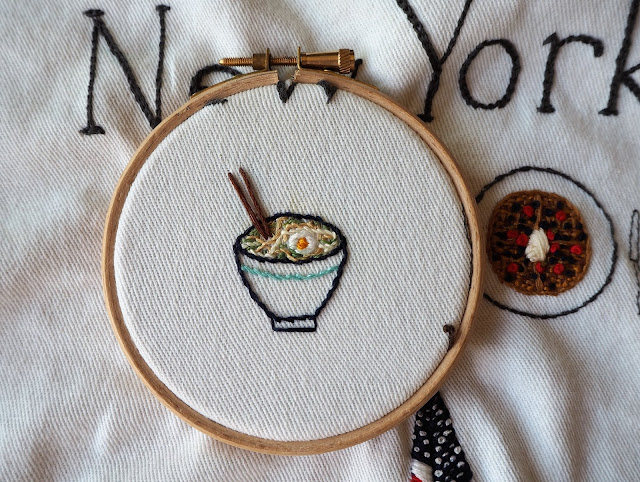 The next two are places that required quite a lot of careful looking and drawing as they were full of tricky angles. First, The Guggenheim Museum, famously designed by the architect Frank Lloyd Wright, with it's contrasting geometric shapes, straight lines and organic curves. 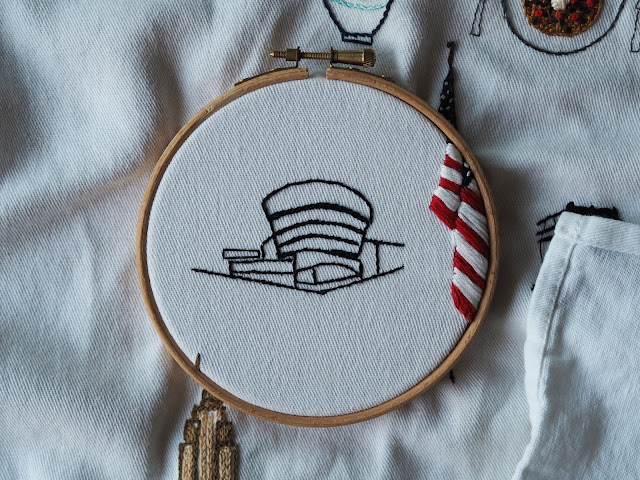 It was really hard to draw. I'll just say that and leave it there. The Brooklyn Bridge wasn't much easier, but I so wanted to include these places so persevered. 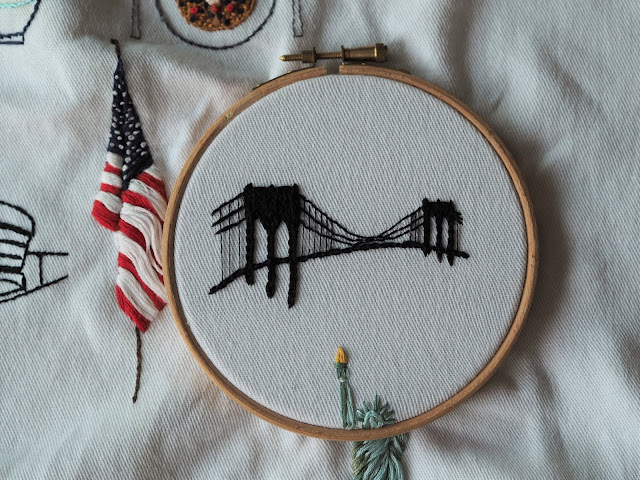 I have been deliberately sewing the harder pictures first, partly to get them over and done with (that sounds like I'm not enjoying this - of course I am!), but mainly because I know that once I'm back at work all free time for embroidery will vanish and I really don't want to be sewing this in the Christmas holidays. I've been trying really hard to sew a motif a day, but it's proven tricky.

After all that architecture, a little vignette of Central Park was relaxing to sew. 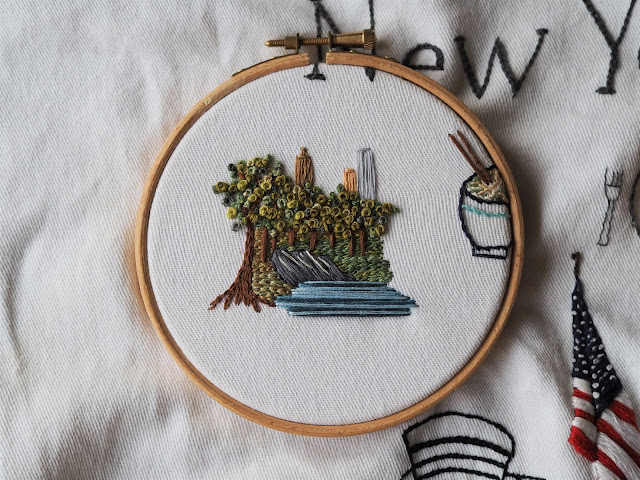 It was the first time in this piece that a French knot had been called for, and I forgot how much I love to sew these and got a little carried away, building up lots of depth in the trees. 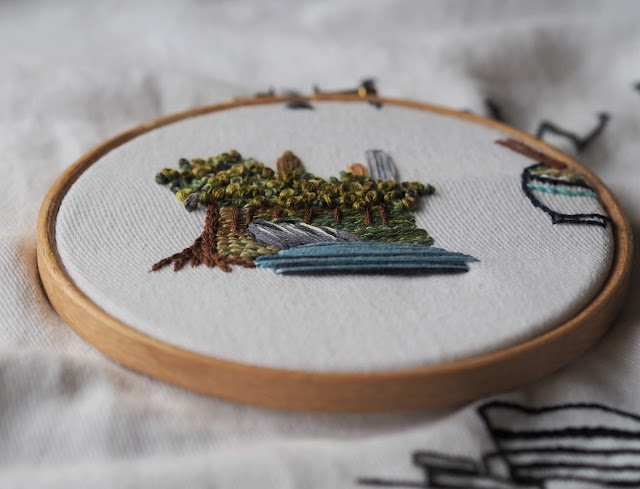 I've just finished sewing a brownstone townhouse too, so that's nine images done so far and another eight to sew, although they are all much smaller so hopefully shouldn't take too long. I can't leave out the yellow taxi and slice of pizza now, can I?