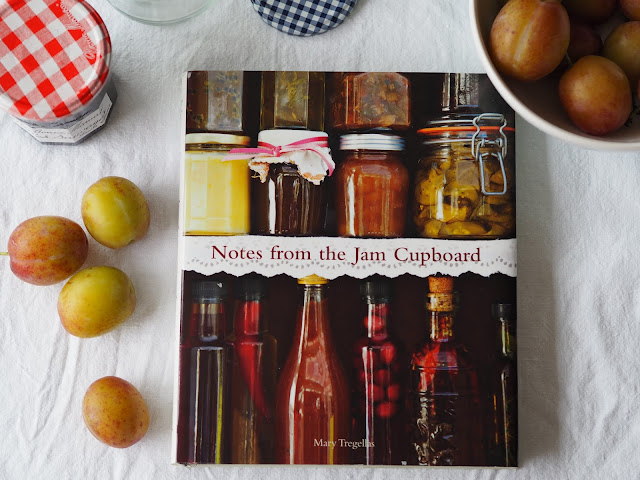 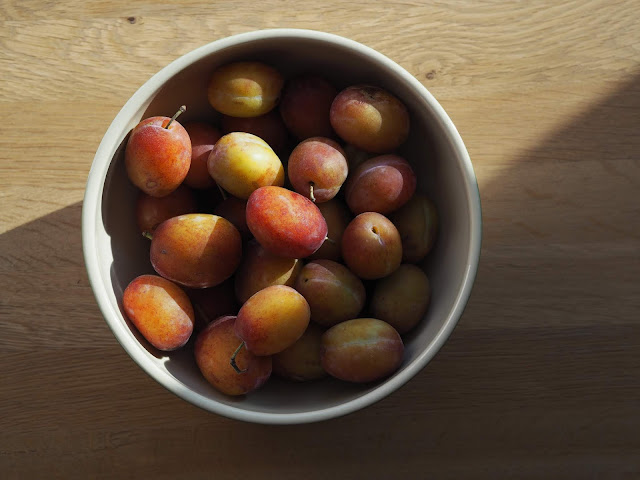 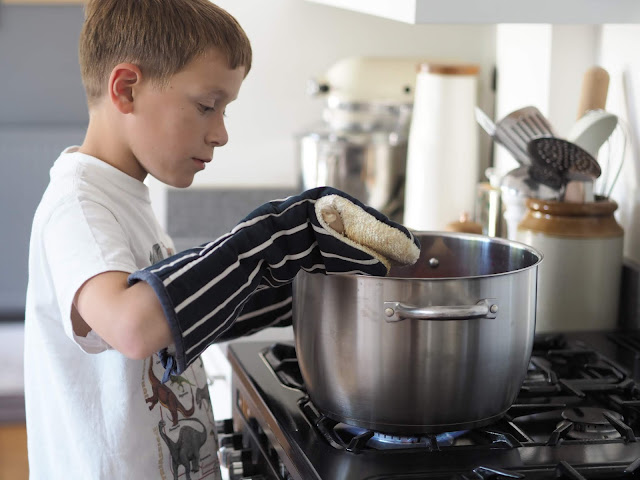 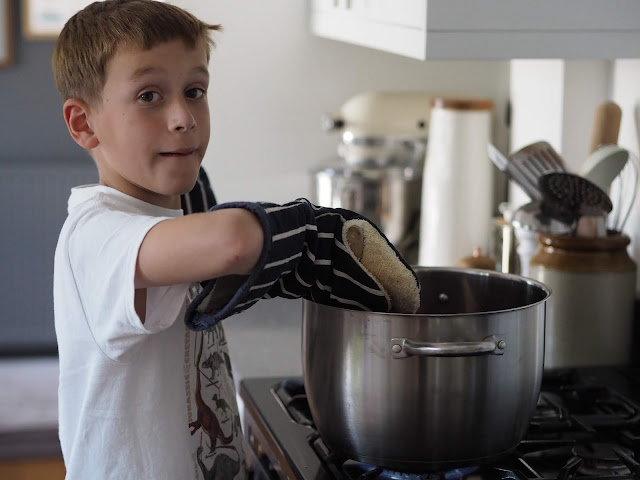 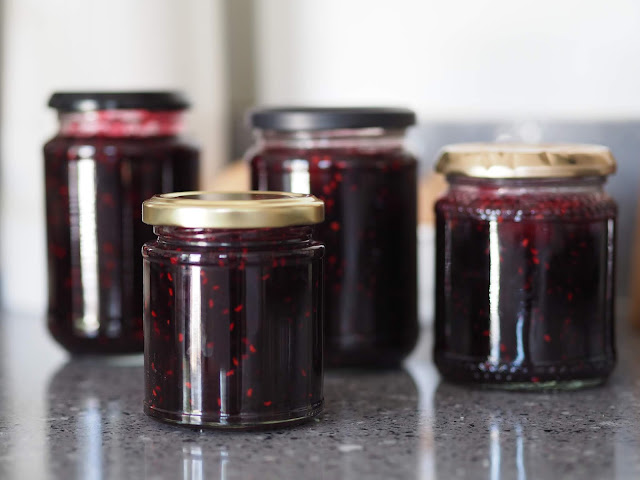 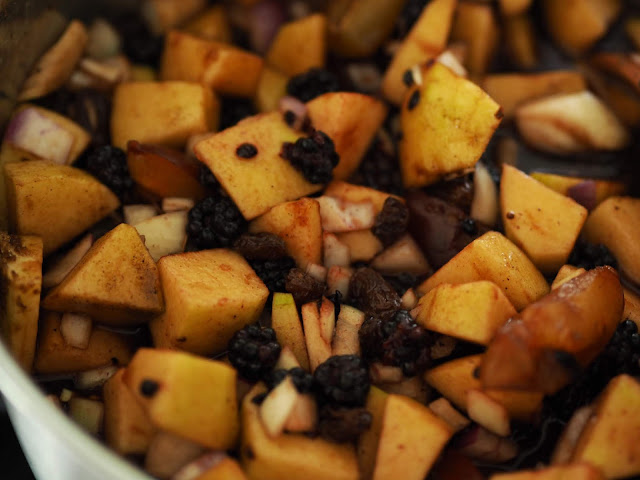 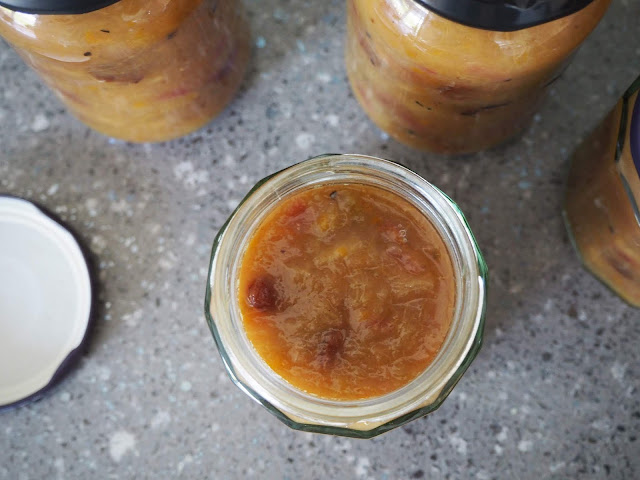 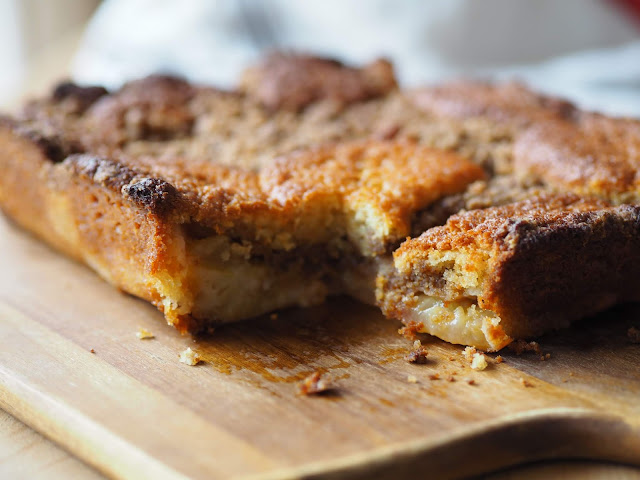 Every year I make the same preserves. Marmalade in January, when Seville oranges are in the shops, bramble jelly in August and sometimes, in the autumn, chutney for Christmas. I love making these preserves as we always eat and enjoy them, and for the way that they seasonally punctuate the year, but I felt the need to try something different. When I first discovered making jam and preserves I wanted to try all the flavours, and had so much fun experimenting with different ideas, but I've lost that a bit. My free time is significantly less and my approach is more pragmatic now: if the fruit is expensive (cherries) or not grown easily in the UK (peaches and plums) it makes more sense to me to just buy a jar of the jam I want, rather than spend a fortune on imported fruit and then spend precious hours turning it into jam. (Seville oranges are the exception here - I am so happy to see them in the dark month of Janaury, and equally happy to fill my cold kitchen with warmth, steam, and the smell of something sweet and citrussy bubbling on the stove.)

Some of my most used preserving recipes come from a little gem of a book called Notes from the Jam Cupboard which was given to me some years ago by my dear friend Abigail. I always turn to this book to make bramble jelly and marmalade, but never try any other recipes and that is a shame because the author, Mary Tregellas, knows her preserves and the recipes are both comforting and inspiring. The chapters are arranged by a theme of flavour or texture, such as Juicy, Tangy, Tropical, Wholesome and Aromatic, and don't just contain recipes for jam and chutney - there are suggestions for cakes, tarts, bread, main meals, sauces and drinks too.  It's a few years old now and possibly out of print, but I found cheap second hand versions available on Amazon and eBay.

I do think of preserving as something of a late summer/early autumn activity, and it was just what I wanted to do on a few of the wet afternoons we had at home throughout August. I wanted to put the radio on and slowly weigh fruit and boil jam, chop vegetables and simmer chutney. 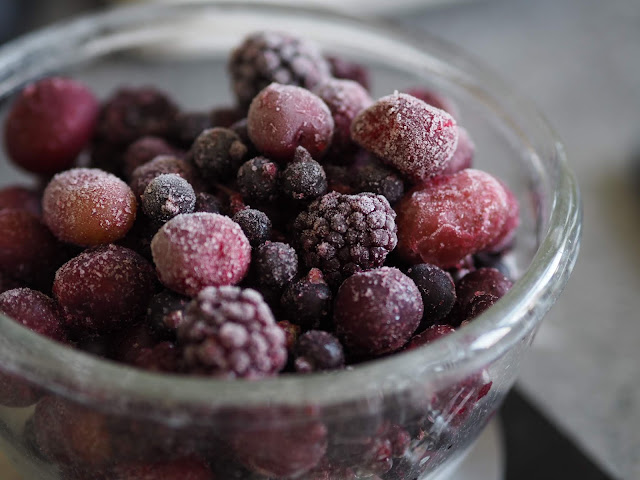 I tried Fruits of the Forest jam, which appealed because it used those bags of ready prepared frozen fruit and I happened to have one, bought for smoothies but never used, in the freezer.  Along with some blackberries from the garden, raspberries that I found at the back of the freezer and some borderline-edible strawberries that badly needed using up, I had a reasonable amount of mixed fruit, so I weighed the whole lot and made a delicious sort of use "up all the random bags of fruit" jam, which you'll be happy to know I called Summer Fruit Jam instead. The recipe itself is just your usual jam recipe - equal parts fruit to sugar, with some lemon juice for the pectin. It was just fun making a kind of jumble-berry jam with lots of leftover fruit, really. 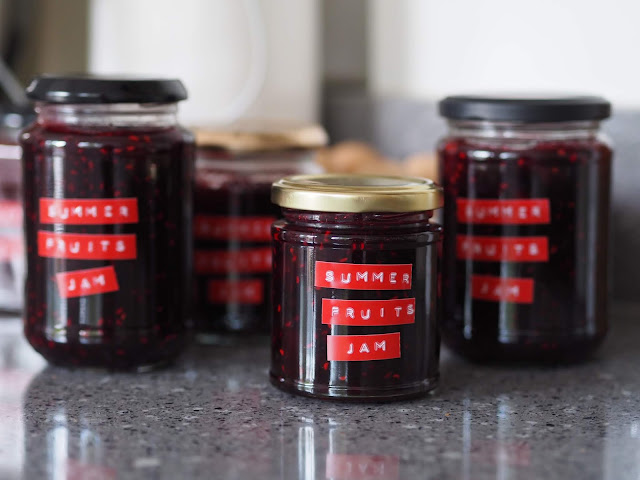 Rhubarb Chutney was next, because I had kilos of the stuff in the freezer, all ready for crumbles, but it turns out Bella and Angus don't really like rhubarb. 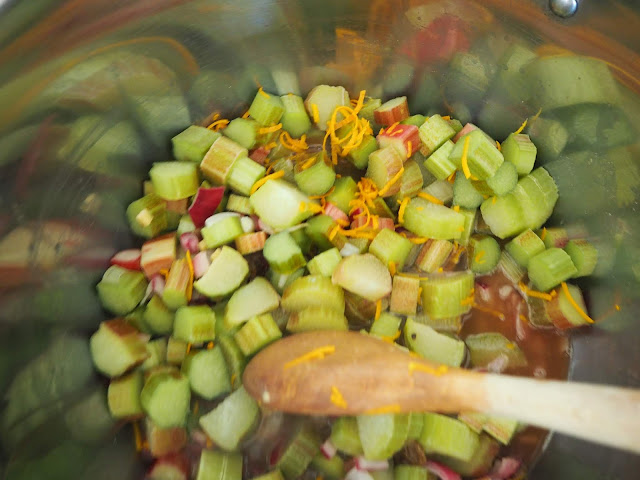 It looked so pretty as the ingredients tumbled into the pan, with the pink and green rhubarb, purple red onion and flecks of orange zest. 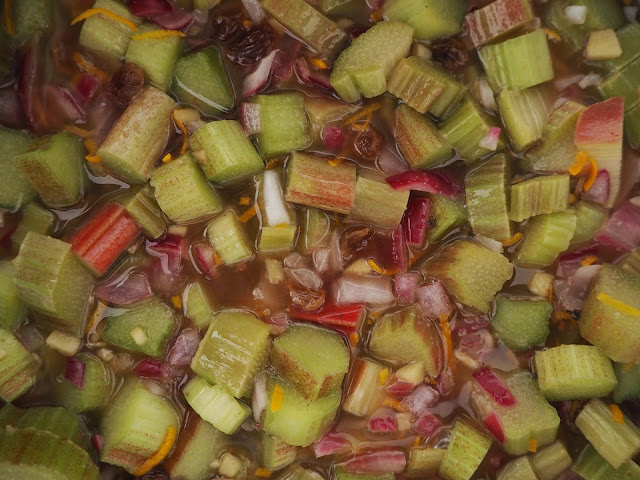 The flavours are punchy, with fresh ginger and orange combined with aromatic cardamom and cinnamon. It's really good, although so far I've only eaten it with cheddar cheese in a sandwich. 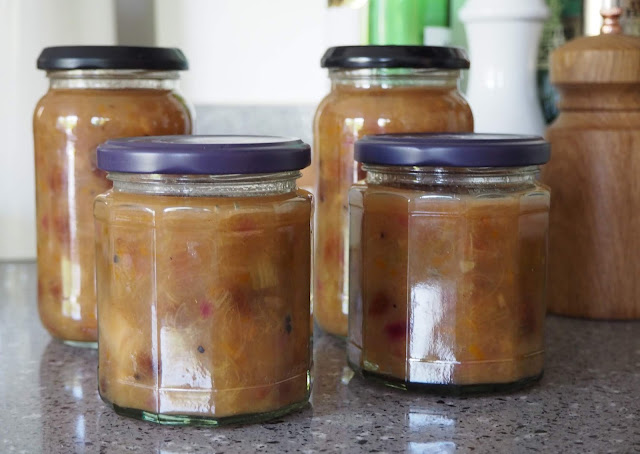 More chutney (because you can't have too much of the stuff stashed away in the cupboard, can you?) came in the form of Autumn Chutney, which I had to make as soon as I read the ingredients list: plums, apples, blackberries, onions and raisins, with allspice, cinnamon, ginger and coriander. Autumnal heaven right there, plus I'd just been blackberry picking and had kilos of the stuff. 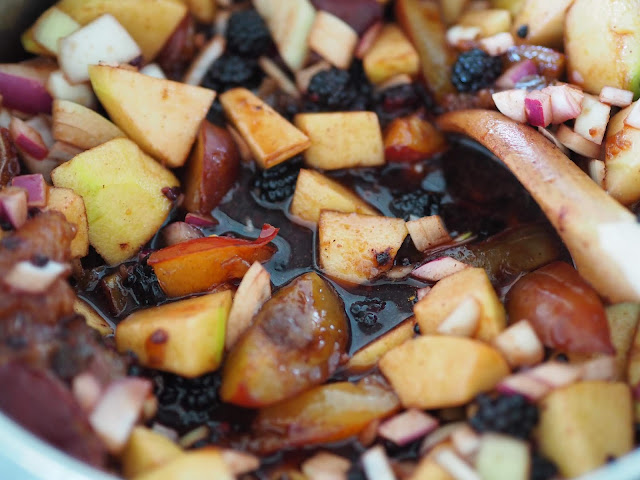 The high water content of the fruit meant it took a couple of hours of simmering to thicken, which then meant that the house stank of vinegar, but a small price to pay I think.

Continuing the plum theme, I tried plum crumble cake. I love plums and have had a bowl of them on the kitchen windowsill for the last month, waiting until they are super soft and almost overripe before eating them. I usually make Nigel Slater's plum cake from Kitchen Diaries, and love it, but the addition of the crumble topping here was good. 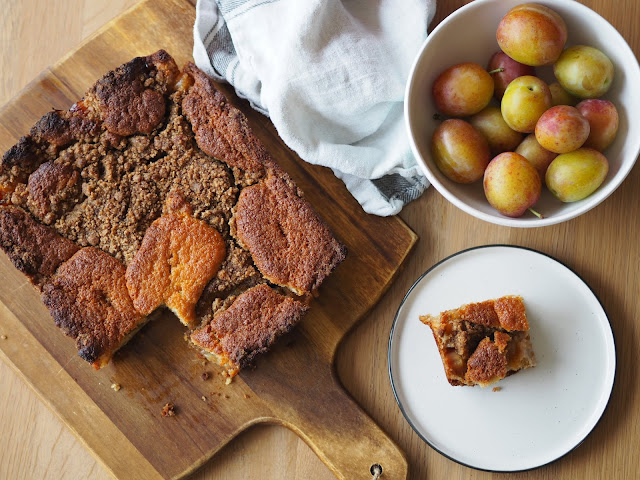 It looks nothing like the photo in the book - the sponger layer under the fruit bubbled up during cooking and burst all over the fruit and crumble topping, and it caught a little around the edges too. But no matter, it was still delicious, the muscovado sugar in the crumble topping going so well with the juicy plums, and the fruit keeping the whole cake moist. 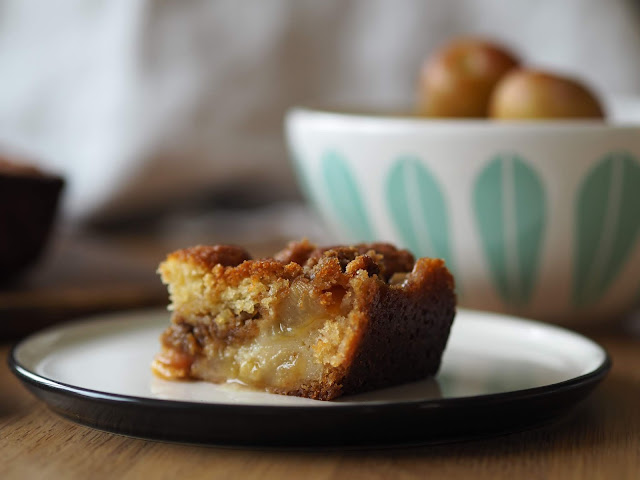 We are inching towards my favourite season for cooking now: soups and stews, pumpkins and apples, and getting out the slow cooker for the first time in months. I see many weekends of gentle kitchen pottering ahead of me.
Posted by Gillian Roe at Thursday, September 12, 2019