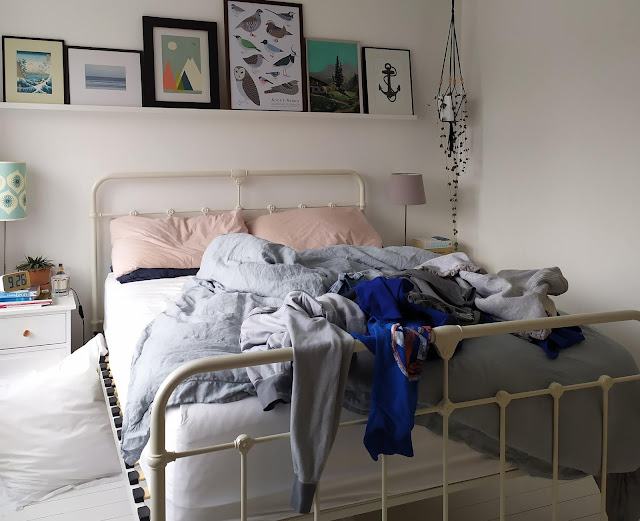 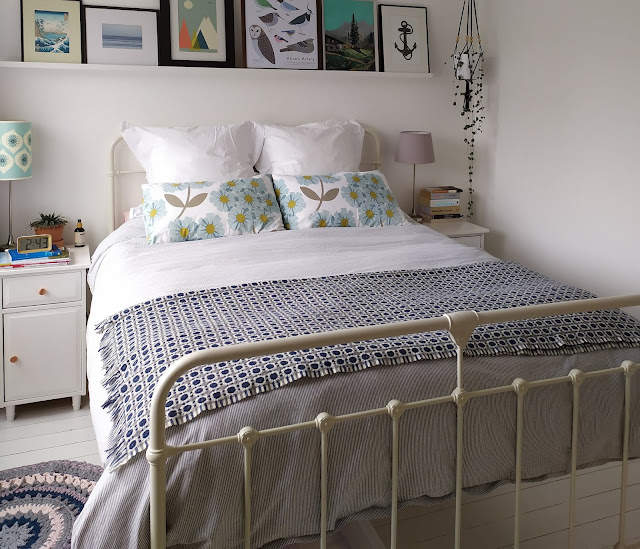 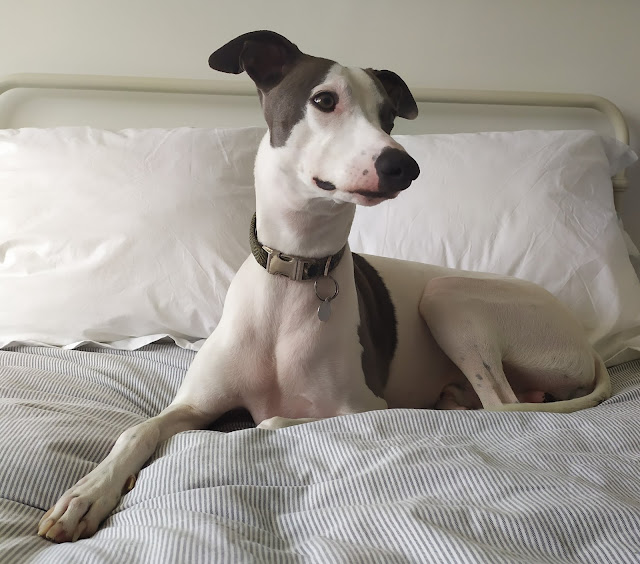 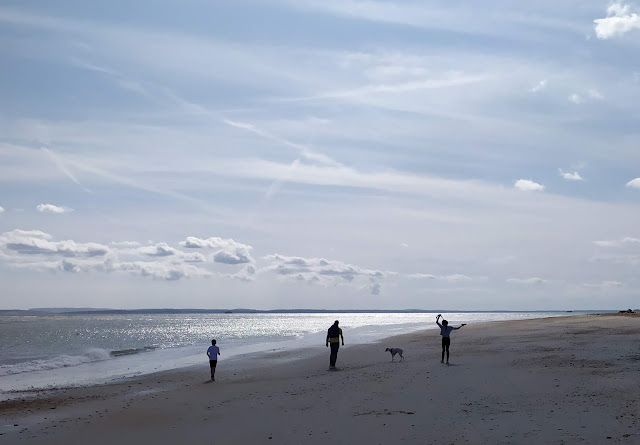 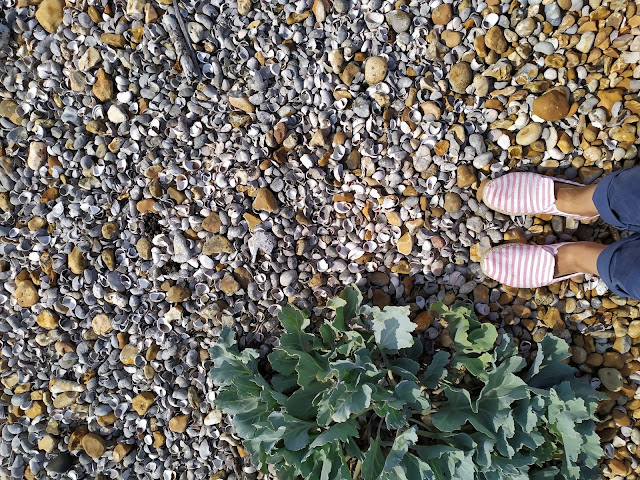 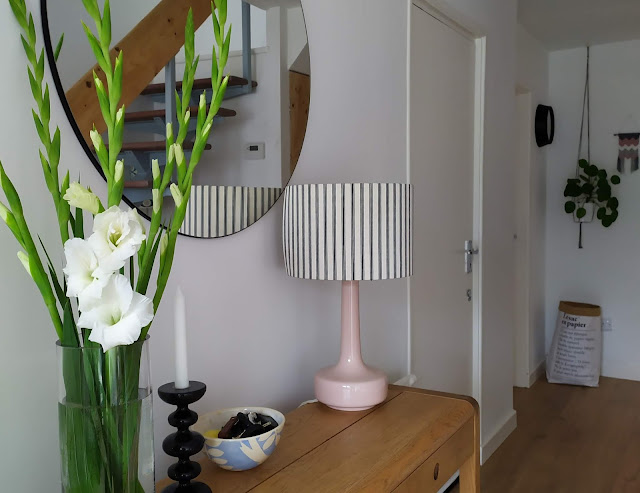 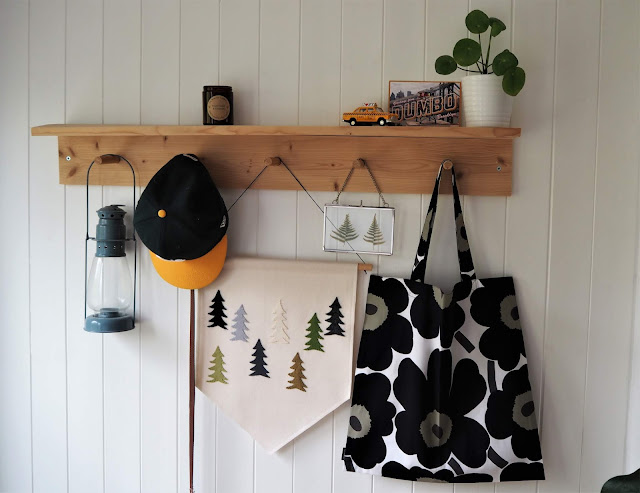 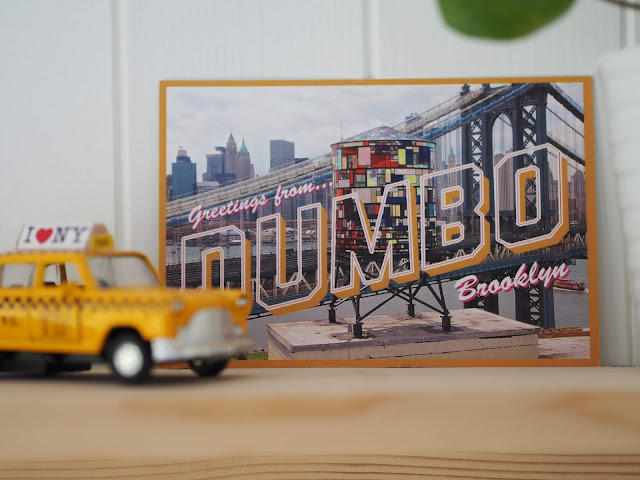 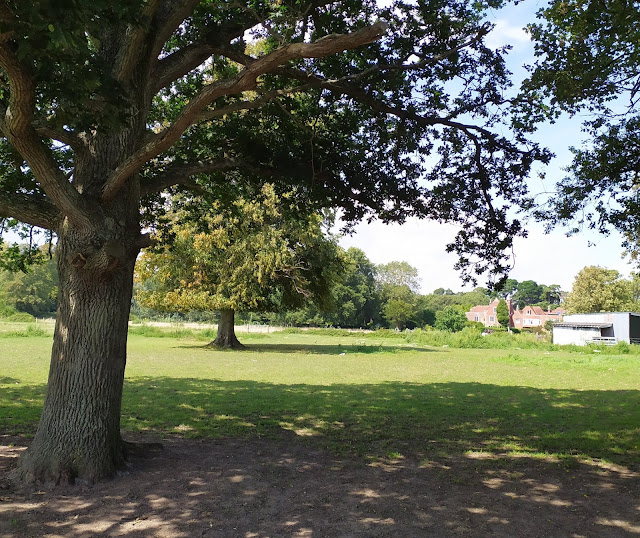 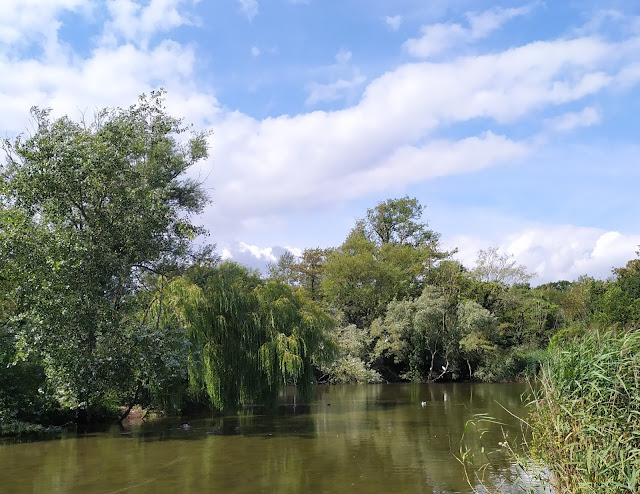 The first thing I wanted to do when we got back from our holiday was eat lots of vegetables. I loved the food we ate in New York, there was nothing that wasn't delicious, but after a while I just wanted some broccoli, or a baked potato. Or an apple. Once I'd gotten over the unpacking, washing and jet lag I really enjoyed simply getting back into a bit of routine: planning meals, doing a food shop, filling the large bowl on the kitchen table with fruit and the vase on the hall table with gladioli. (I love it when they are in the shops - they look so expensive and structural, when these were only £1.70 a bunch.)

I did enjoy unpacking one thing though - souvenirs. I tried not to spend too much on holiday, buying more gifts and things for the children than for me, but there was the odd thing that tempted me, particularly tea towels. I didn't realise I'd bought so many until John pointed out that I had actually bought four (although one was a gift, so...) 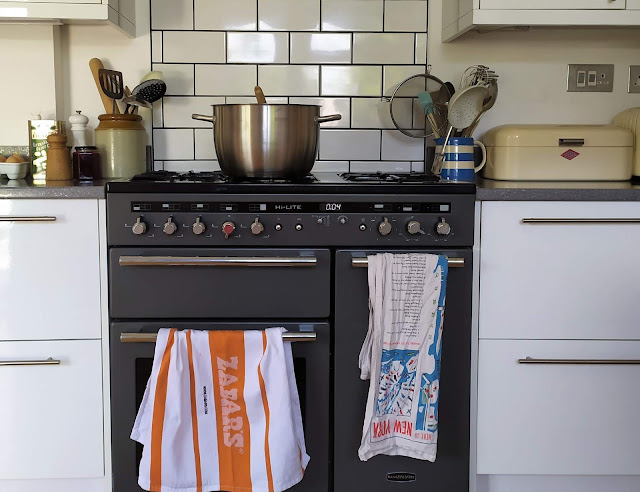 Now, every time we do the drying up, a little bit of New York is in our kitchen, prompting memories. But one of our tea towels was not for drying up, oh no. This linen beauty was too lovely to ever see a greasy roasting pan: 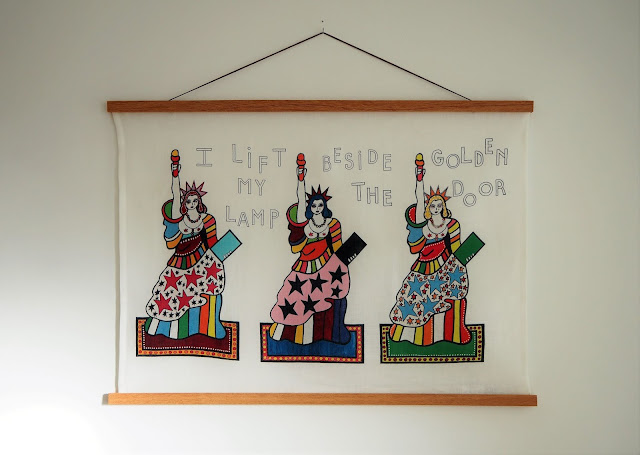 I bought it in the High Line gift shop and the art work is painted onto the side of a building along the path. The artist is Dorothy Iannone and the text comes from the poem The New Colossus by Emma Lazurus, which is inscribed on the plaque at the foot of the Statue of Liberty. I very much like the message of hope and freedom in the poem, and love the bold and colourful representation of that famous statue. I bought a set of Poster Hangers

and now this hangs in the hall. 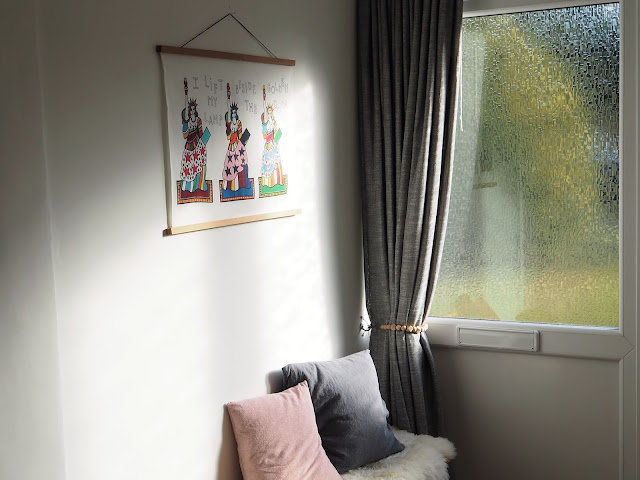 I already know that this project bag from Purl Soho will be worth it's weight in gold, and I did also treat myself to this bracelet-making kit. 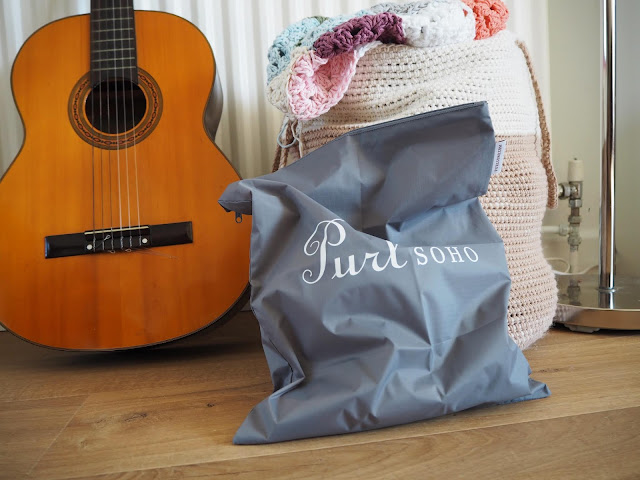 There is no practical reason for having a child's yellow taxi on a shelf but it makes me happy. 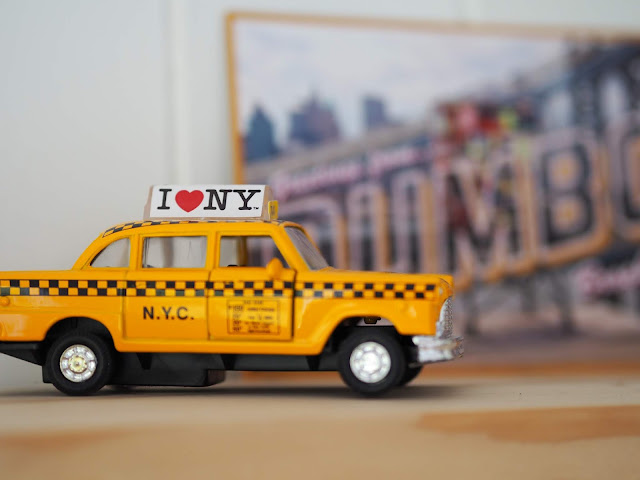 John was off work for another week once we got back and I was itching to get a few jobs finished around the house. We still hadn't properly sorted out the new spare room (which used to be Angus's bedroom before he moved into Bella's old room and she moved into the old spare room...keep up) so we spent a day or two in there, unpacking boxes and bags, sorting through the filing cabinet, that sort of thing. Time consuming and dull, but very satisfying when it's done. John made a desk and shelf, the sofa bed was delivered, and it's all looking very smart in there - I will take some photos and show you. 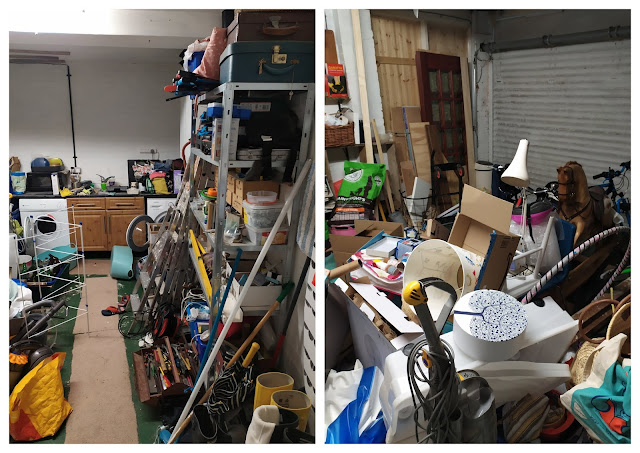 We also tackled the garage. My sister said to me - aren't you always tackling your garage? And she's right. At least once a year we have a huge garage sort out to end all garage sort outs, and swear we'll never let it get that bad again. The trouble is our garage is large and internal, and it's all too tempting to think, hmm, I don't know what to do with this box/old toy/random object...I know, I'll just stick it in the garage. And then a bag of clothes to go to the charity shop gets put next to it, and some tools that we were too rushed to put away properly, and before you know it you've got a mountain of things blocking your path to the washing machine - and then, well, it's such a mess, what's the point in even trying to keep it tidy? 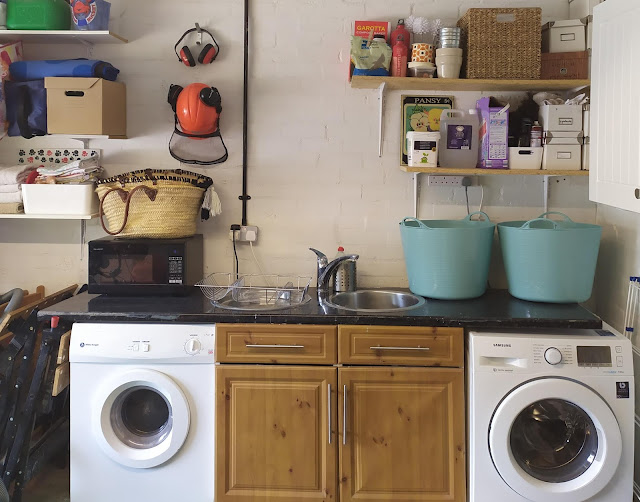 As well as taking three car boot fulls of stuff to the tip and charity shop, we accepted that we are not campers and said goodbye to nearly all our camping equipment (given to us by friends who moved to Australia) and gave it away to friends or donated it, freeing up lots more space. We put up shelves with offcuts of wood and hung hooks on the wall. Storage is always the answer! Why on earth didn't we do this four years ago? John wants to build a bench for woodworking and we need some kind of rack for the bikes, but otherwise it's looking very tidy and I'm doing a super job of maintaining the current level of tidiness. 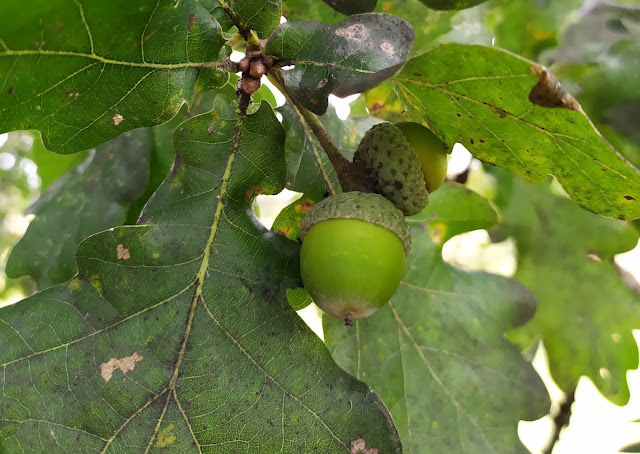 The weather was pretty dreadful during that second week (although it's GLORIOUS right now) with days of torrential rain and thunderstorms. That combined with the fact that it's dark by 8pm all added up to a realisation that we're definitely in late summer now. 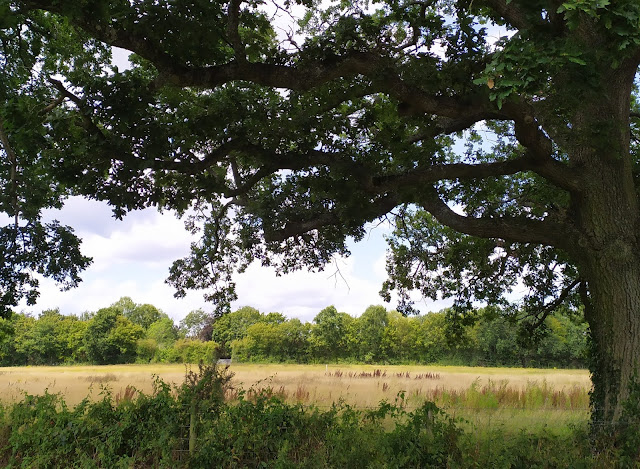 While not quite changing, the leaves are losing their colour and we're definitely in blackberry season. Look at these sloes (I think they are sloes anyway) I found in our local dog walking field. I'd pick them but I haven't the first idea what to do with them apart from making sloe gin, and aren't you supposed to pick them after the first frost or something? 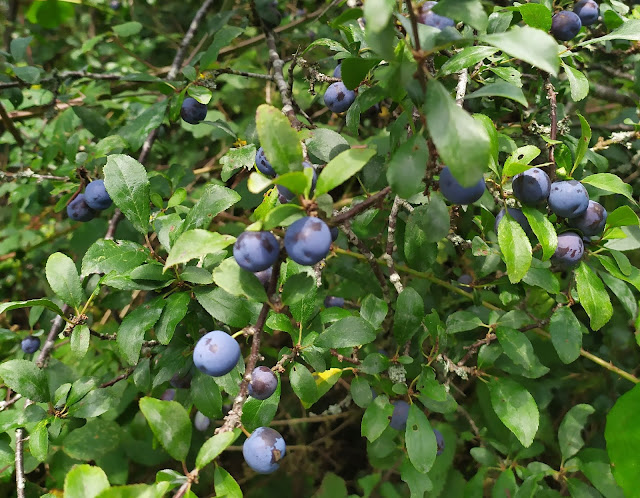 It's crazy to think we've been back almost two weeks already. I have, however, started work on something to remind me of our holiday, here's a clue: 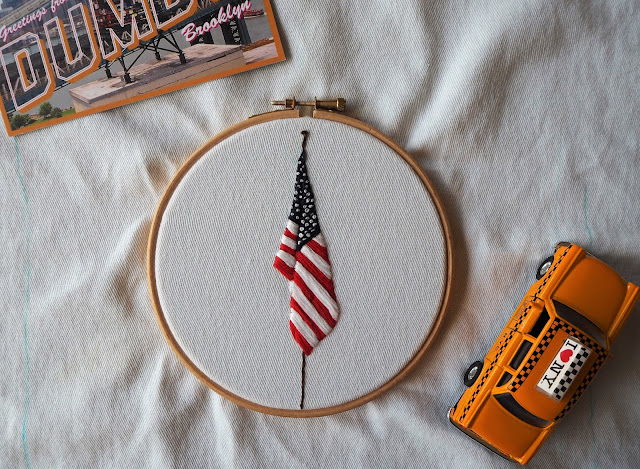