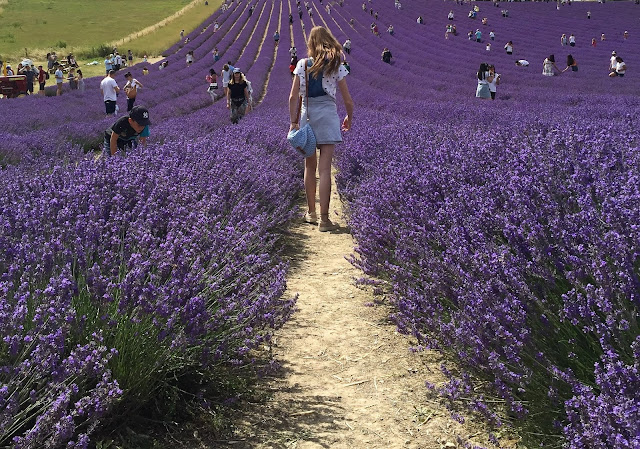 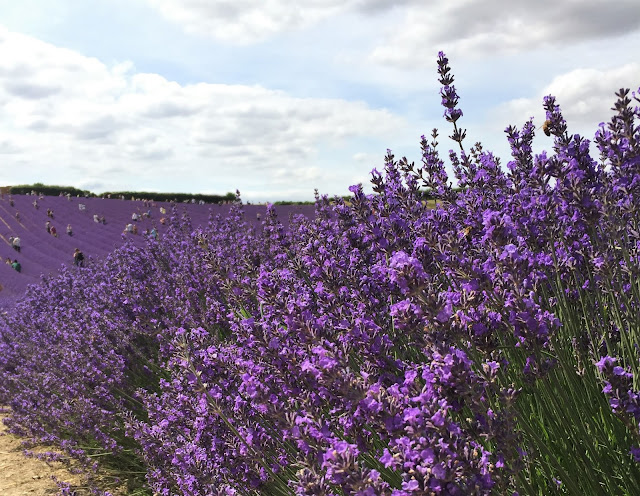 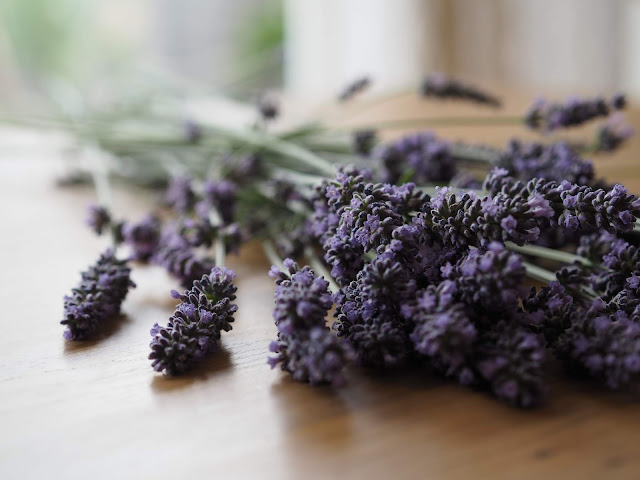 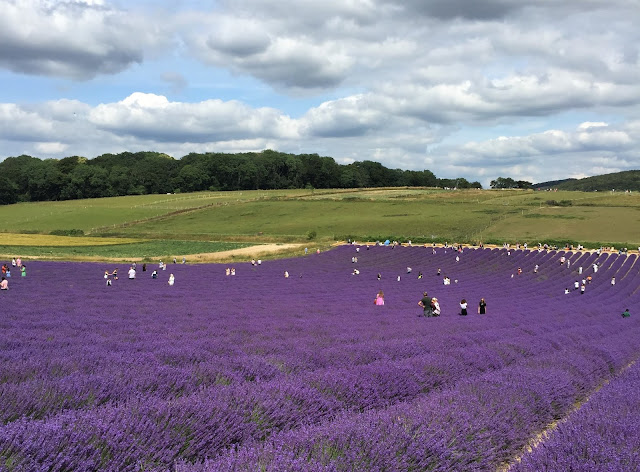 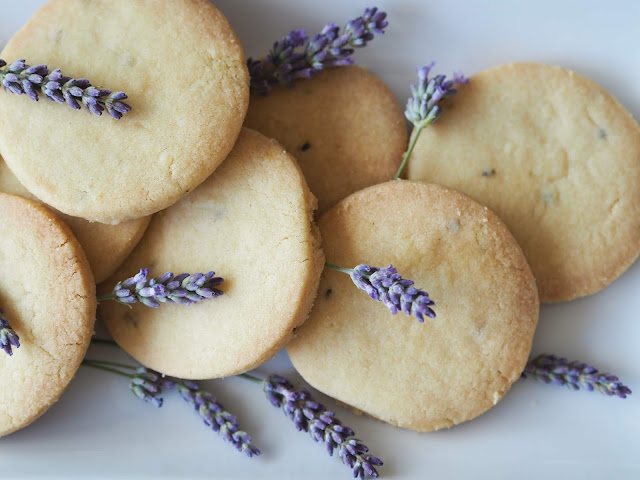 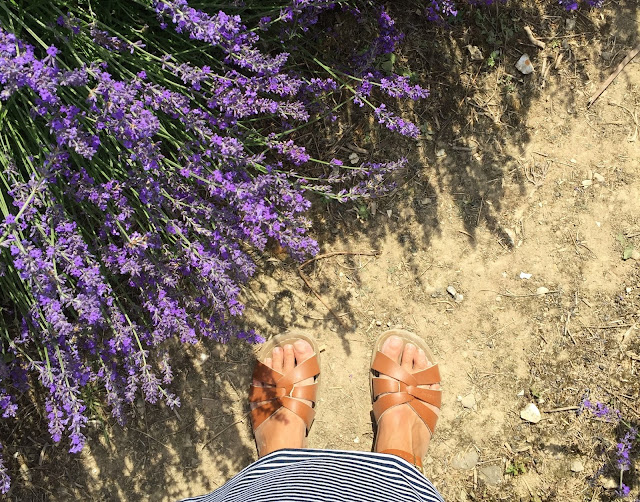 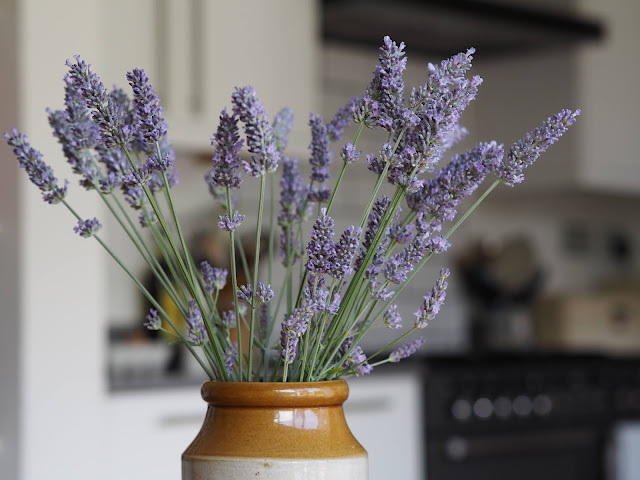 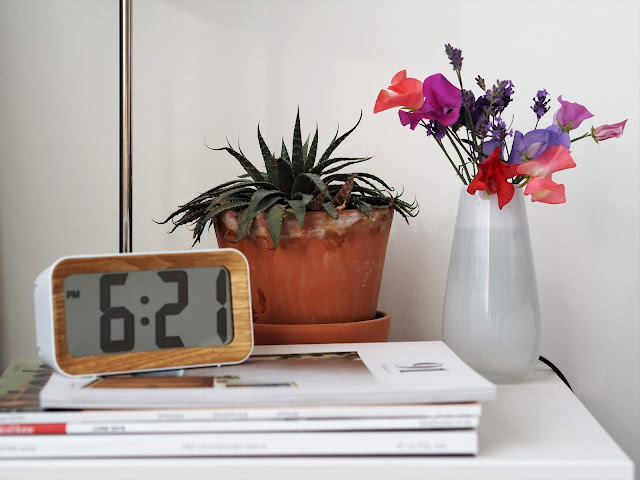 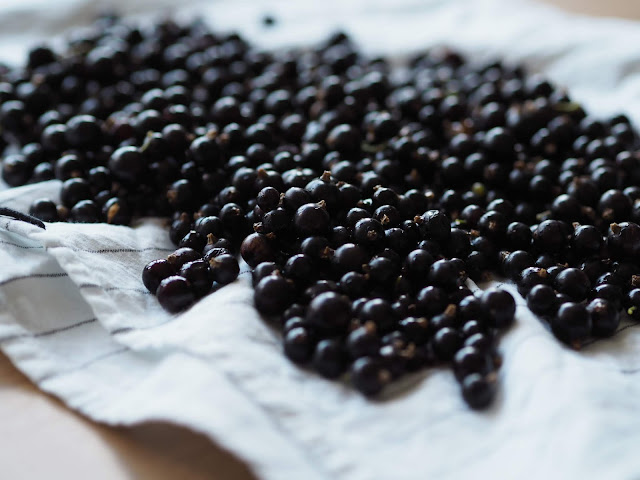 Last weekend, my mum suggested a visit to Lordington Lavender, a nearby lavender farm which opens its fields to the public for one week a year. I'd never heard of it but I think everyone else in Sussex and Hampshire had, judging by the crowds. It was still lovely though and, despite the number of visitors and the fact that they'd sold out of ice cream, managed to retain a charming English village fete feel, with tractor rides, hay bales, and stalls selling teas and lavender cake, as well as their own lavender products. The colour and scent of the flowers is as strong as you'd imagine, but the thing that struck me the most was the hum of the bees. You almost don't notice it at first, but once you do, it's captivating. So many beautiful bees, just doing their thing. That hour was just the pause I needed at a very busy time of year. 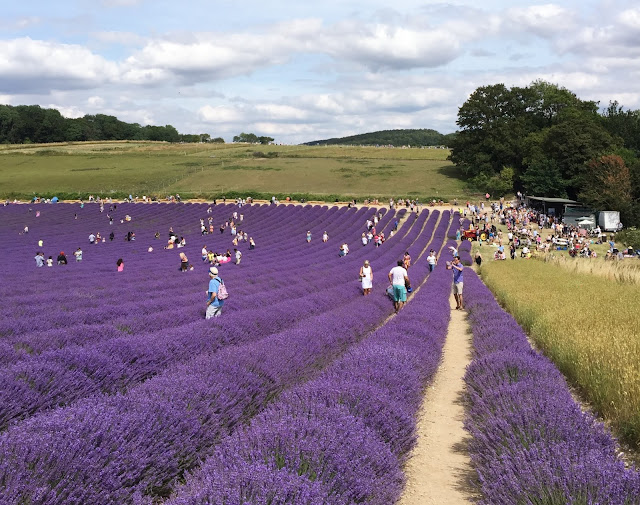 As you would expect for somewhere so photogenic, it's very popular with photographers and I think there were lots of people there who'd gone wearing nice clothes and with good cameras purely to take some pretty family photos. I hadn't really given the whole trip much thought and, while I had remembered my camera, I forgot the memory card, and I hadn't given a moment's thought to what myself or the kids were wearing (with Angus in that awful Minecraft t-shirt that he loves and I loathe). 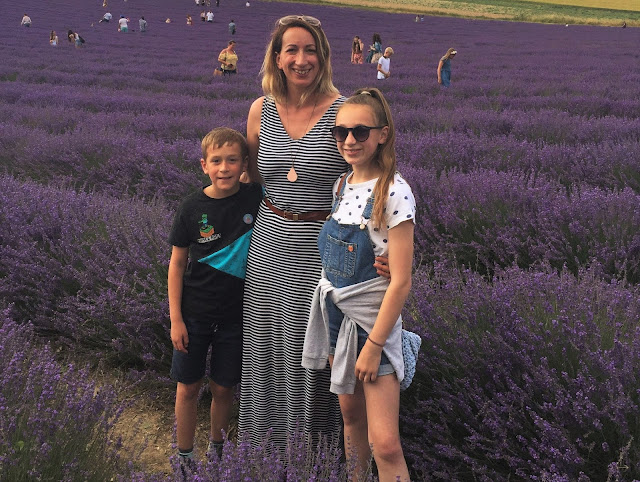 But still, a delightful way to spend a warm Saturday afternoon in July, and I got some gorgeous body lotion too. 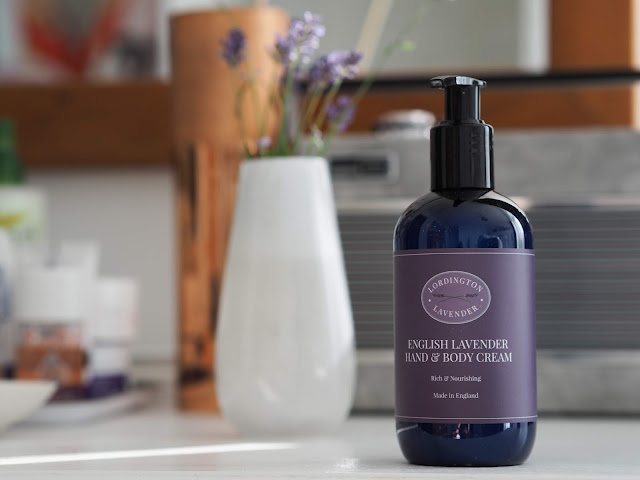 With my head full of those rows of purple flowers, I went straight to my sister's to beg an armful of the stuff from the huge plant in her front garden. 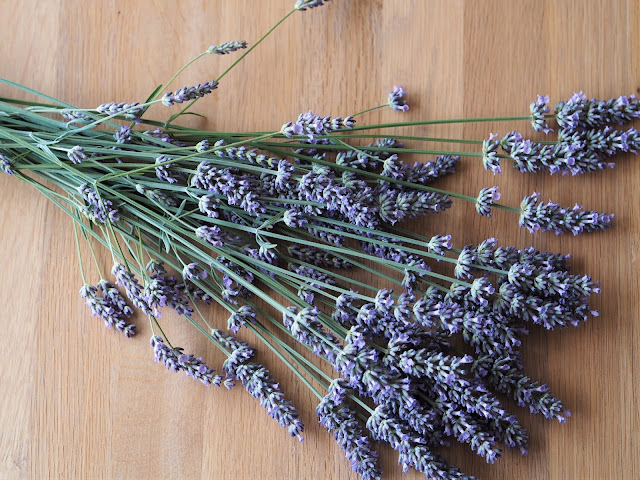 I had thought about drying some but it's currently sitting in an earthenware pot on the kitchen table. I love it. I can pretend I live in a Provencal farmhouse. 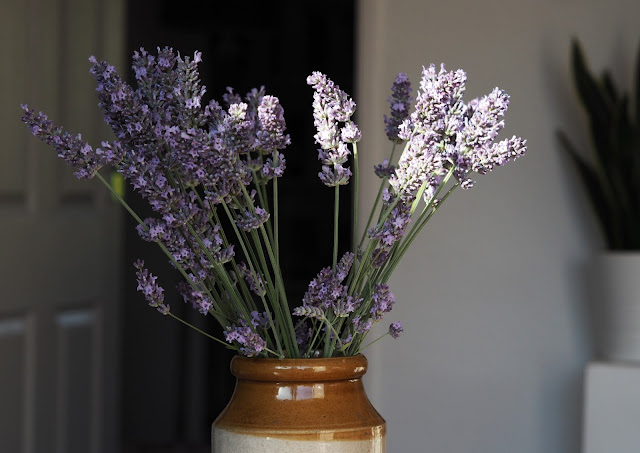 I also became obsessed with making lavender shortbread, and baked a batch on Sunday afternoon. I was worried that the flavour might be too strong - I love floral flavours like lavender and rose but know that not everyone does - so took them into work on Monday for honest criticism. The response was more lavender, not less, which was relief. I didn't want anyone to think they were eating soap. 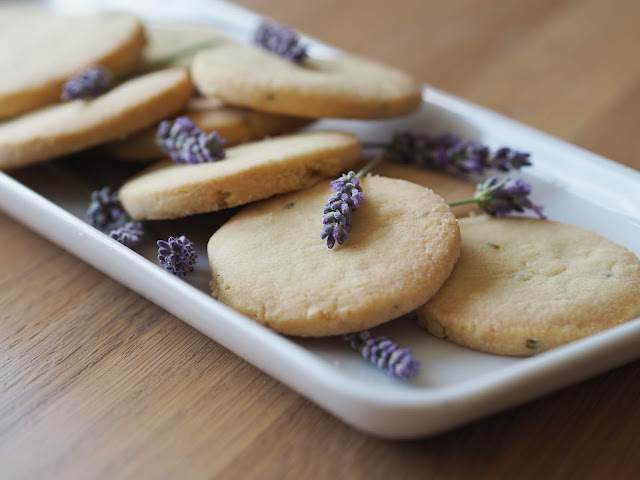 I just made another two batches tonight as we're having a tea party after work tomorrow for a much loved colleague who it retiring, and we're all bringing something along. Don't worry, I've kept some shortbread back for us to eat. 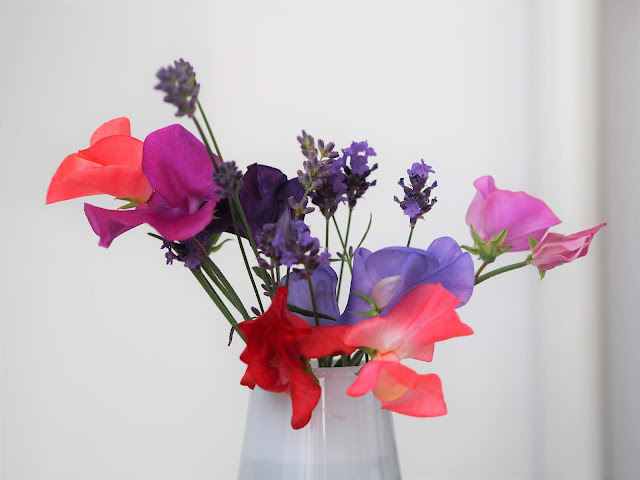 Lavender aside, I finally managed to produce a few sweet peas, not my usual amount but enough to put in a little vase on my bedside table. 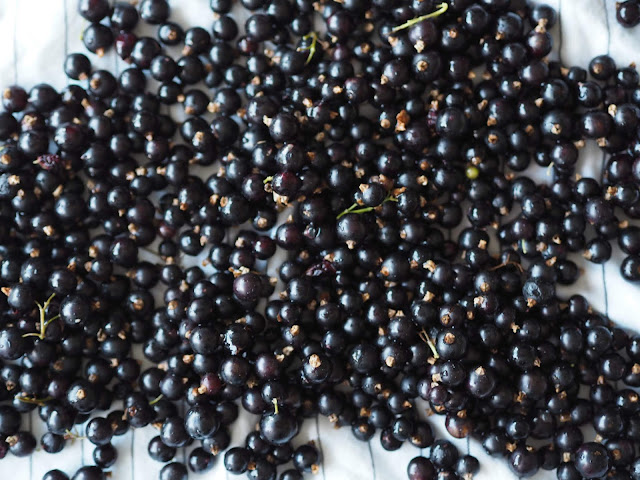 We also spent a little time picking all the redcurrants and blackcurrants at the bushes from the bottom of the garden. I say we - I bribed the kids and made them do it, as I was distracted by lavender shortbread. Ziggy, as ever, had to be in on the action. 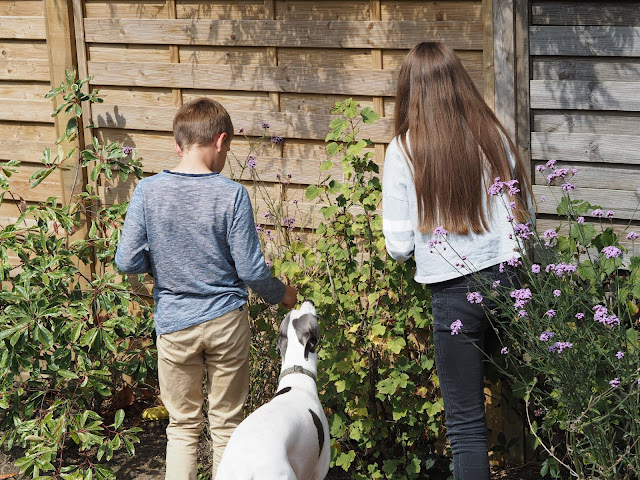 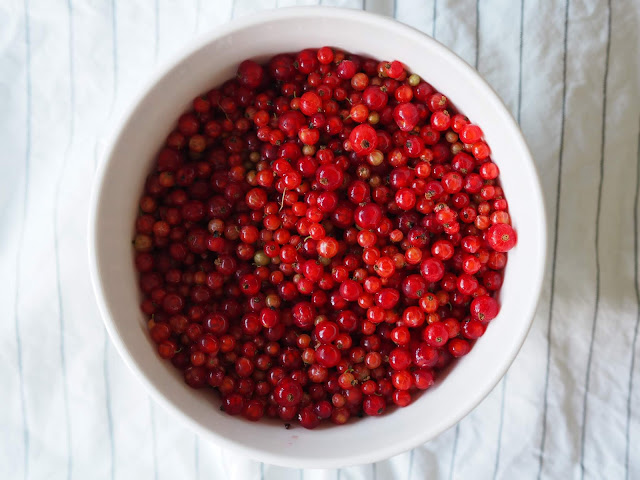 For now, all the berries have been washed, weighed and frozen, ready for a day when I am not rushed and actually have time to deal with them. I'm thinking redcurrant jelly, possibly to be turned into a sweet chilli dipping sauce, as I did last year, and maybe a summer pudding. For the blackcurrants, I have enough for one batch of Nigella's blackcurrant and liquorice ice cream and possibly a jar of jam.

Thank you for your kind comments on Bella's room. Yes she is a lucky girl, but I know that she appreciates the space she has and in no way takes it for granted. I came home from work on Monday to find that she'd stripped the bed and put fresh sheets on, dusted, watered the plants and was in the process of vacuuming! That instantly put me in a good mood, let me tell you. However, the rest of the house is a complete pigsty at the moment because we're all just concentrating on getting to the end of term and letting out a huge exhale in relief. Two more days.

This amount of dough gives me anywhere between 12 and 15 biscuits depending on how thickly I roll it out. You can keep going until every last bit of dough is used, but I find the last few scraps become crumbly from the extra flour you're working into it and hard to roll out.
Posted by Gillian Roe at Wednesday, July 17, 2019