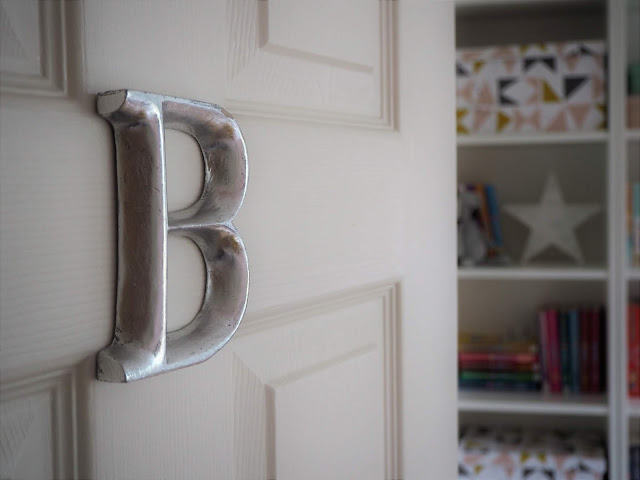 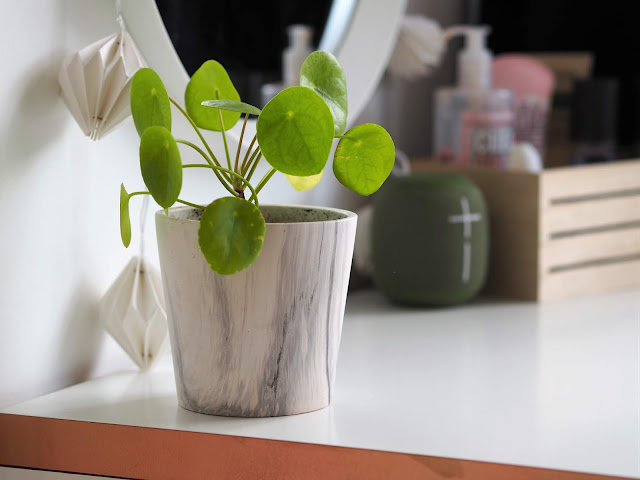 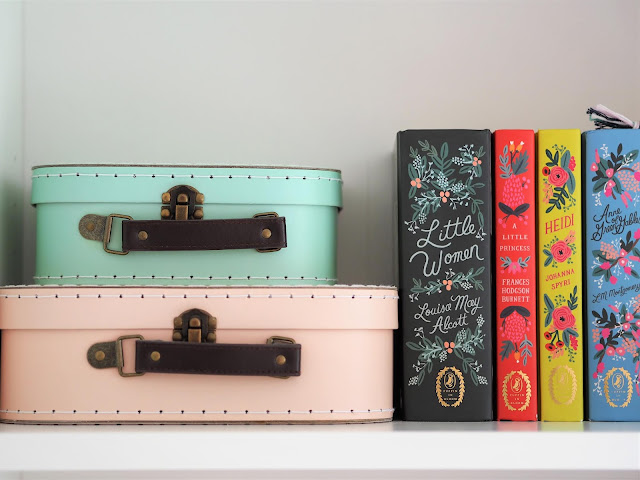 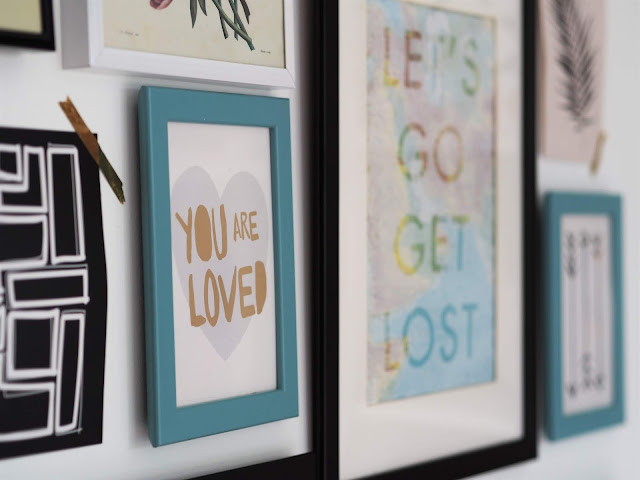 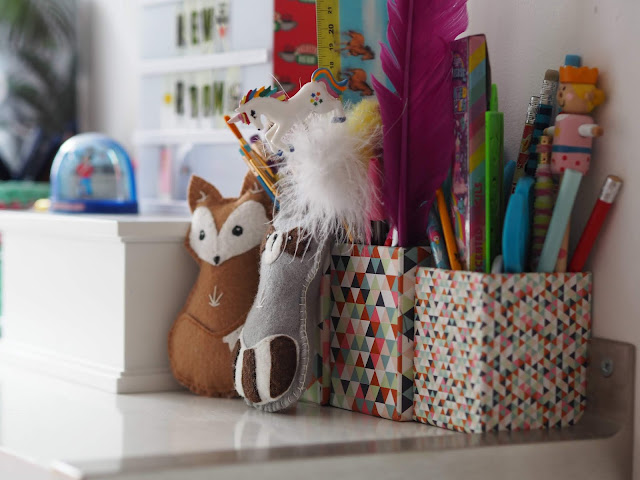 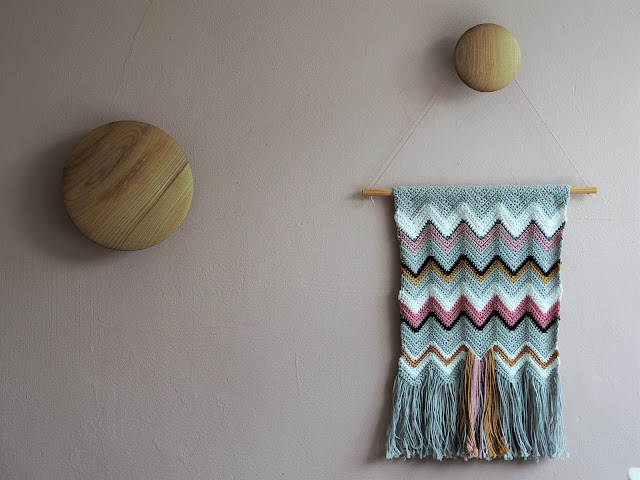 I feel like I've written about Bella's bedroom many times. From her six year old's bedroom in our old house in Leeds, to her quickly decorated new bedroom here when she was eight ,which we then updated two years later, and then updated again last summer. It was always a challenge to squeeze all her things into the smallest room in the house, with her needs ever changing. I should say that I never mind this constantly evolving bedroom situation; it gives us a chance to update and refresh the children's bedrooms, and it's unrealistic to expect a child's bedroom to never change, as what they need at six is so different to what they need at eleven, and sixteen. 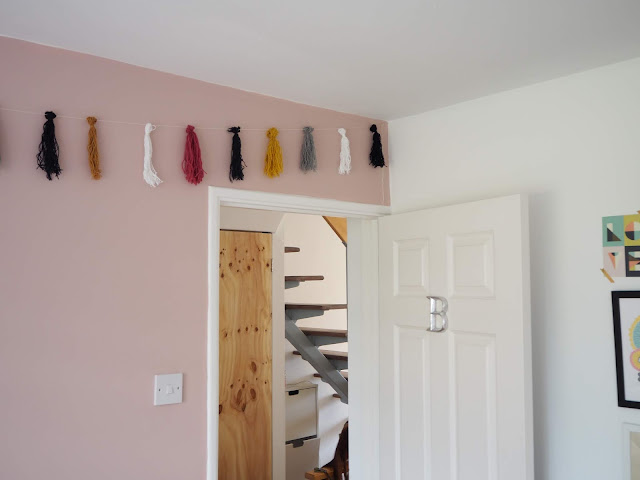 What we've done is move Bella, who is twelve and a half, into what was the spare room downstairs, just off the hall and opposite the kitchen. This room was only really used if we had guests, or if I was doing the ironing. Wasted space, to put it mildly, while Bella was crammed into a box room upstairs.  From the spare room, an archway leads to a smaller room which we used to call the office but no-one ever worked in there, it was basically storage.

Here are a few before and after photos of the spare room: 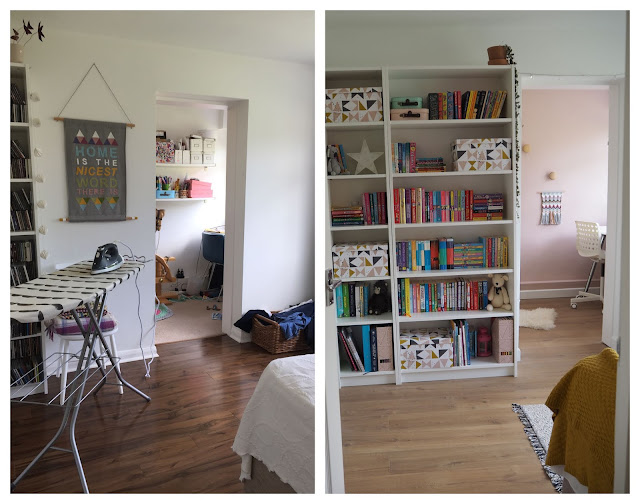 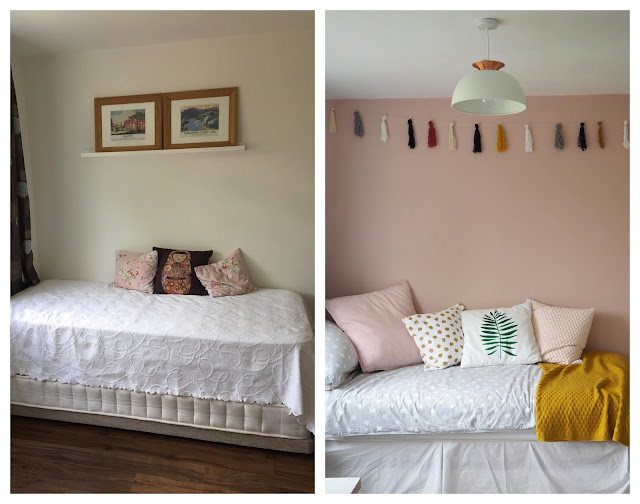 and the office area: 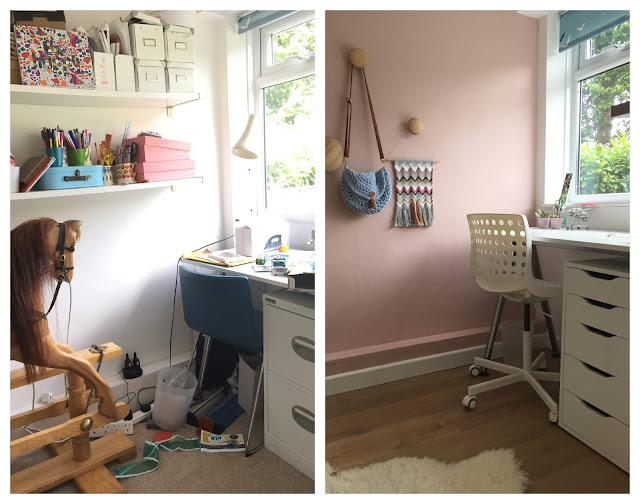 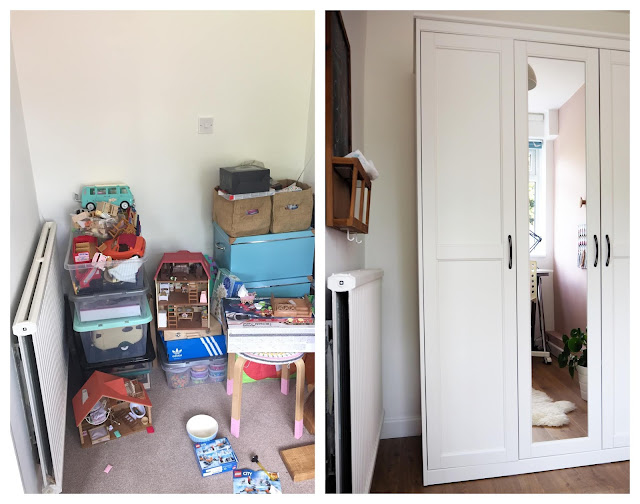 (When the house was built this smaller room was a utility room, accessed from the garage and with a door to the garden, but previous owners had blocked up the garage entrance and knocked through an archway, making it accessible from the house instead. So we had two awkwardly shaped but linked downstairs rooms which added up to quite a good sized bedroom.)

Over half term, we removed the laminate flooring from the spare room and the carpet from the office and used the same flooring that we have in the hall and living room, largely because we had so much left over that we only needed to buy another couple of packs. Straight away, using the same flooring throughout made the space look like one room rather than two. We also boxed in the upvc window frame, moved a couple of light switches and redecorated. 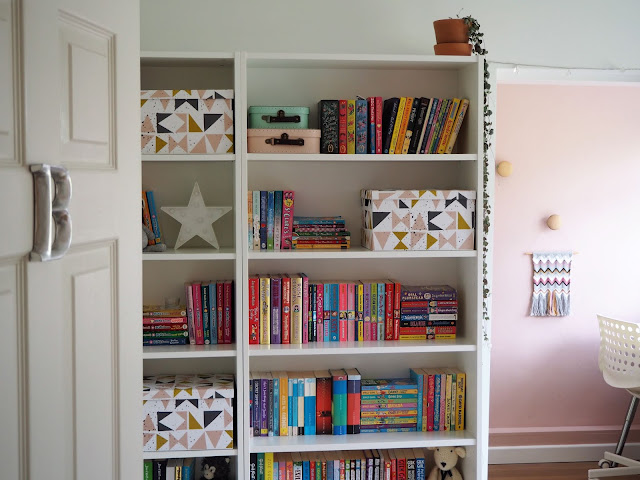 As much as possible we tried to reuse what we already had, buying new only when we absolutuely had to. Another IKEA Billy Bookcase (I could assemble these in my sleep now) was added to the one that was already there, so that Bella finally has enough space for all her books and those storage boxes which are ideal for storing small toys, craft supplies etc. 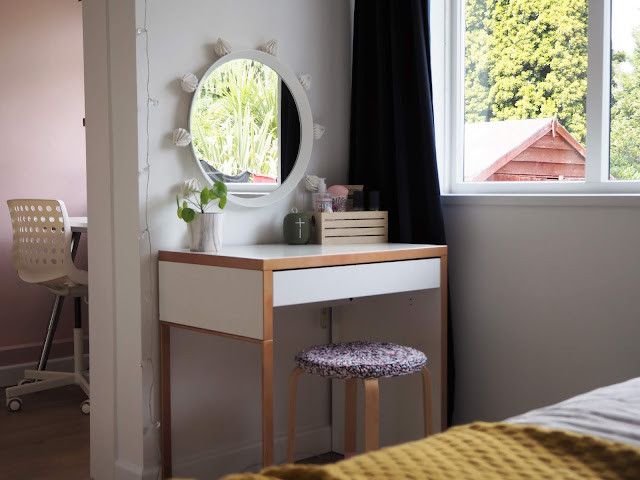 I updated Bella's six year old desk (the Micke desk from IKEA) by covering all the pink metalwork and trim with copper spray paint and turning it into a dressing table. It was no longer big enough for her to use as a desk, so it's nice that it has a new purpose. 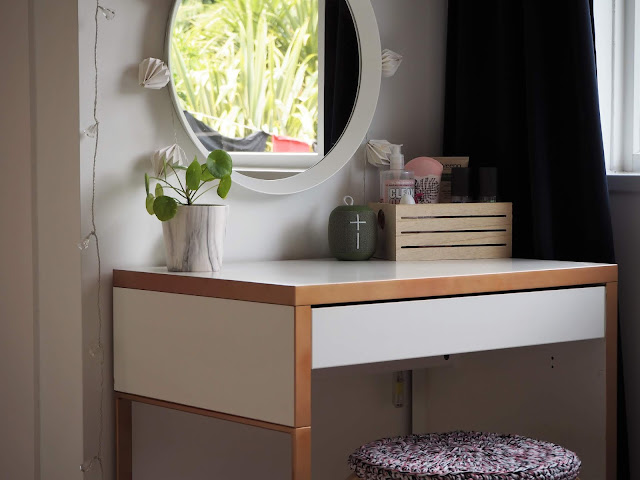 An old IKEA Frosta stool was given a face-lift with new cover made from a load of leftover scraps of yarn. 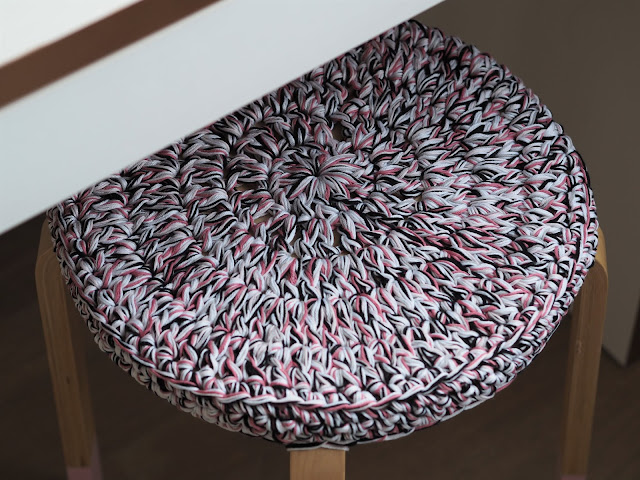 In between the door and bookcases hangs a gallery wall. All the prints were ones we already had, we just updated a few frames cheaply from IKEA and Wilkos. 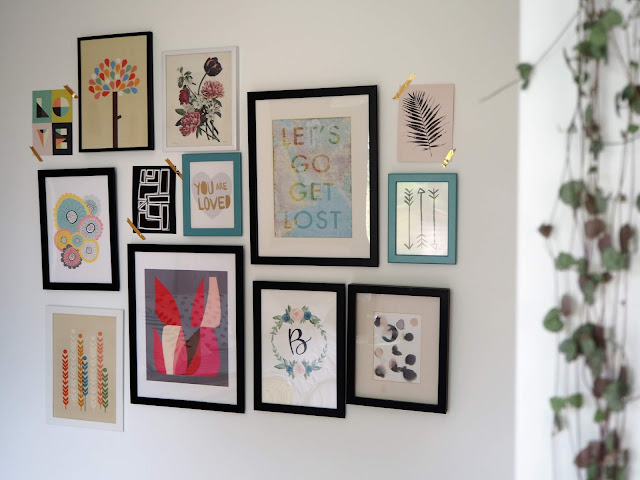 Bella is now using what was the "spare bed", rather than her old wooden one, because it's a trundle style bed with a pull-out mattress underneath, so perfect for sleepovers. 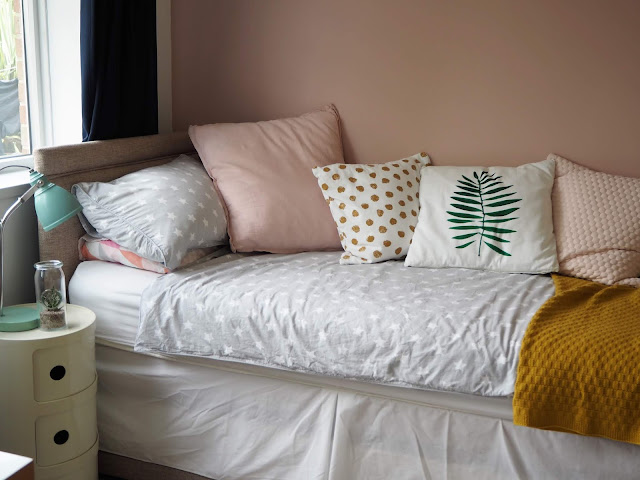 Most of the bedding and cushions we already had, although Bella chose to spend some of her pocket money on a new cushion and a mustard throw. 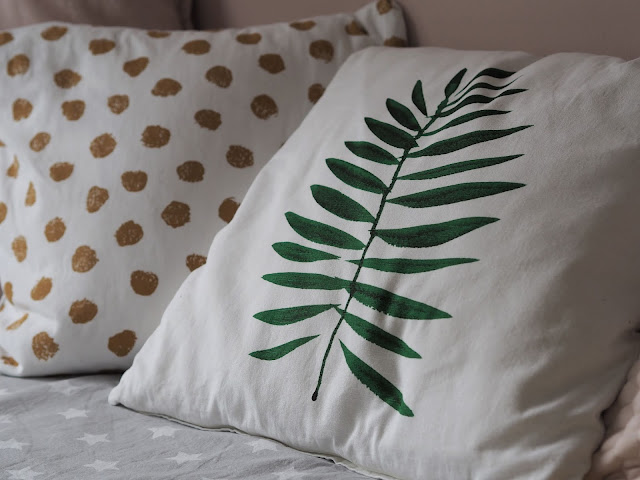 I added a garland made from leftover scraps of cotton and acrylic DK yarn. 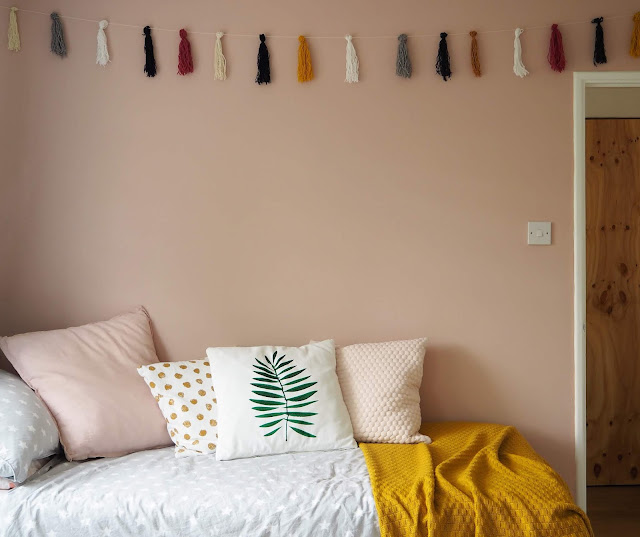 Moving into the old "office", this now holds Bella's wardrobe and desk. It's an awkward room due to the boxed in pipework that runs along one long wall, so we decided to devote this wall to hanging storage, for her school blazer, bag etc. 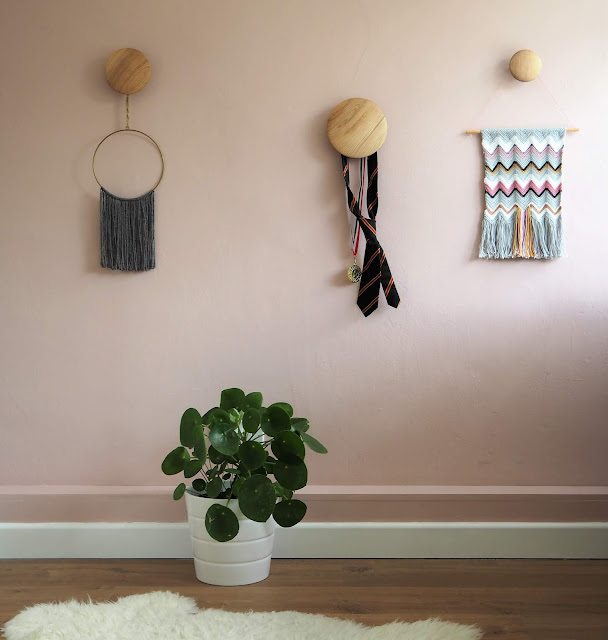 At one end is space for a wardrobe, a bigger one than before because Bella does not have a chest of drawers to hold clothes, so everything is hung or stored in boxes in the wardrobe. 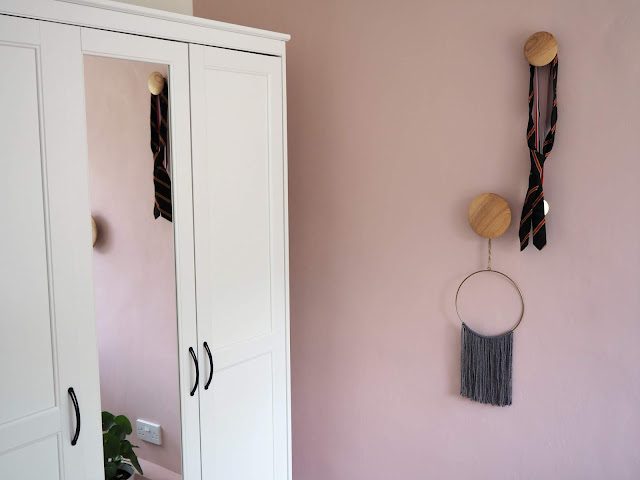 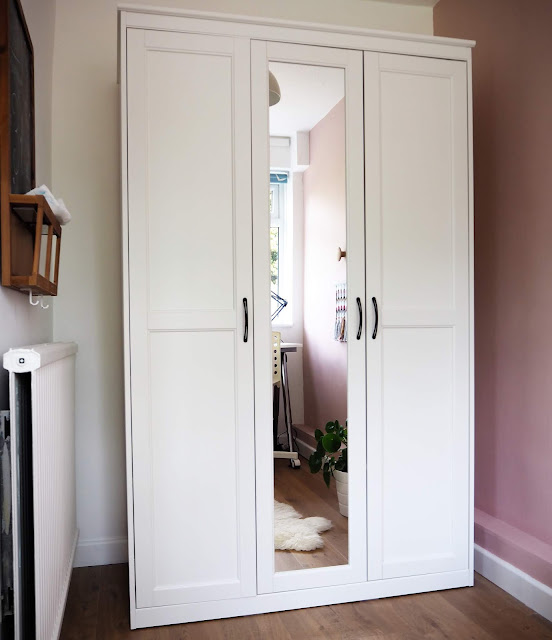 At the other end, under the window, sits the desk that was there before with the addition of a little chest of drawers underneath and a couple of shelves above. This desk (which we've had for about six years maybe) is plenty big enough for Bella to study at, with space for folders, laptop etc. Although I bet she will continue to use the kitchen table as she always does... 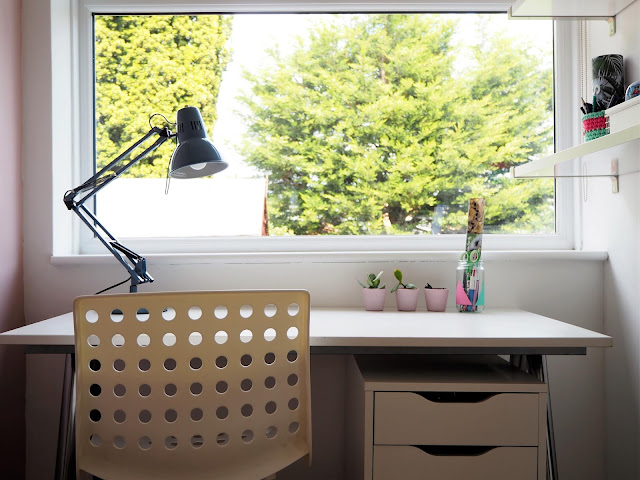 She arranged and styled everything herself, and these two shelves hold some of her most favourite things, so I'm relieved to see a couple of old handmade toys up there. 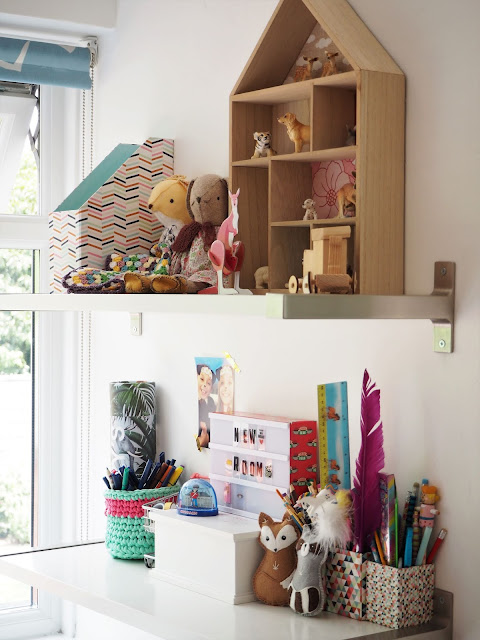 We bought two new lampshades, but I didn't mind this as we'd never updated the lighting in this room since we moved in four years ago. 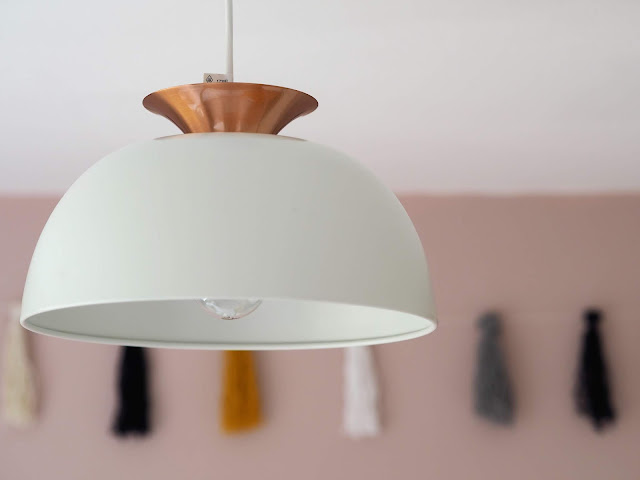 We were able to reuse so many things; the curtains, desk and chair, a slim Billy bookcase, dressing table and stool, bedside table, bed, plus smaller things like storage boxes, prints and shelves. I'll provide links for everything we bought at the bottom of the post.

So you might be wondering about what kind of spare room we have now, and what about poor neglected Angus? Well, Angus has moved into Bella's bedroom, taking with him a huge wall map, his clothes, and about two hundred books. His old bedroom is now going to become a multi-use room, and it is going to work extremely hard! It will be the spare room when it needs to be, although we need to buy a sofa bed before we do anything else, so that we can put people up when they come to stay (or let them have our bed while we sleep on the sofa bed). But the sofa bed is also so that this room can become a sort of second sitting room, with somewhere for Bella, Angus and friends to play on the Xbox or watch a DVD. It still holds all Angus's toys in the large cupboards in the eves, so this is essentially his play room for now, which he is delighted about. ("It's like I've got two bedrooms mum!") And finally it will be an office, the room where we keep all our files, paperwork and printer, with a desk and chair. If any of you use these kind of spare room/offices/play rooms I'd really appreciate any tips on how best to get the space to work. I'm guessing it's one thing mainly: storage!

I hope you are all well? We've had the loveliest weekend, visiting lavender fields, picking fruit and enjoying the weather among other things, just taking it a bit easier than usual. It was much needed after a tough week last week, during which I was unwell with a horrible virus, no doubt something to do with end of term tiredness. Anway, five more days to go...