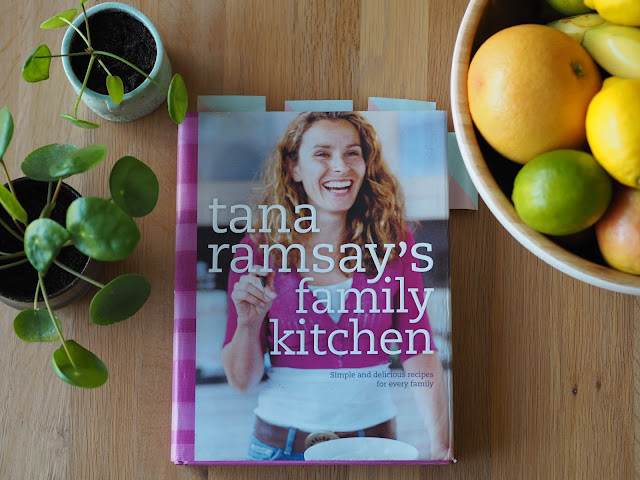 Well, this book was a trip down memory lane. Published in 2008, when Bella was a toddler and before Angus was born, I completely associate this book with being a stay at home mum with very young children. Just one flick through it, and I was back in our kitchen in Leeds in the world of play groups and coffee mornings and nappies. One recipe in particular in this book, the cheese and ham muffins, was my go-to lunch recipe when my friend and her children would come for lunch. We had a standing Tuesday lunchtime date and would take it in turns to host, meeting with all our children before taking them home to be put down for naps. The muffins, I remember, were easy to prepare, delicious warm, and enjoyed by babies, toddlers and adults so a win. I cherish those memories and those weekly lunches, coffees, and play dates with my friends back then which, frankly, kept me sane.

Tana Ramsay's Family Kitchen is a solid, practical cookery book, arranged into useful chapters like "cooking from the cupboard" and "trying new tastes", along with the usual breakfast, lunch, dinner and pudding. The only reason it's still on my shelf is that there are a couple or recipes in it which I use all the time which mean I haven't yet donated it to the charity shop. One of those is baked pumpkin, pancetta and pea risotto, although I use butternut squash instead or pumpkin and bacon instead of pancetta. It was a revelation to me that you could bake a risotto, instead of standing over the hob stirring for half an hour, and I use that recipe a lot.

But, looking through this book with fresh eyes last month, I really struggled to find things I wanted to cook. The tone felt patronising at times, the desserts seemed babyish, and there are so few imaginative meat free recipes. I realised that I, and my family, had perhaps outgrown this book. However, I persevered and found some little gems within those pages which we had fun trying out.

The first was "lime and ginger salmon fillets with noodles". 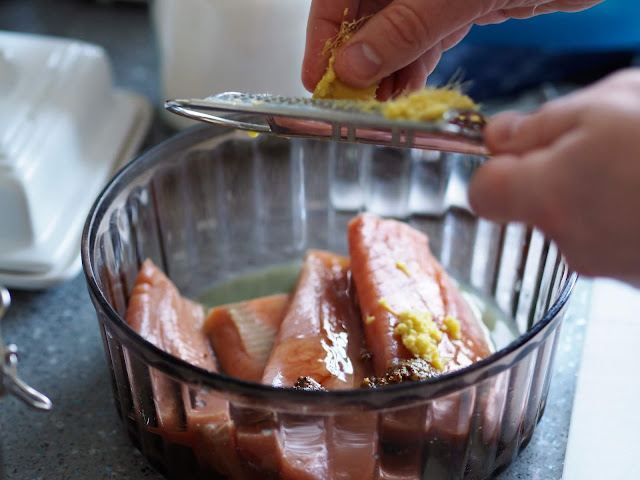 The fish is marinated in honey, mustard, ginger and lime juice before being pan fried and then put to one side. 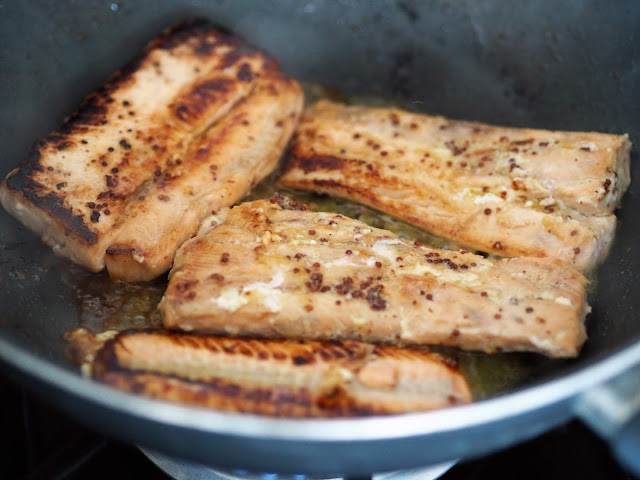 While the fish is cooking, you boil noodles and broccoli and then, while the salmon is resting on a plate, use the remaining marinade to make a sauce in the pan with some melted butter. 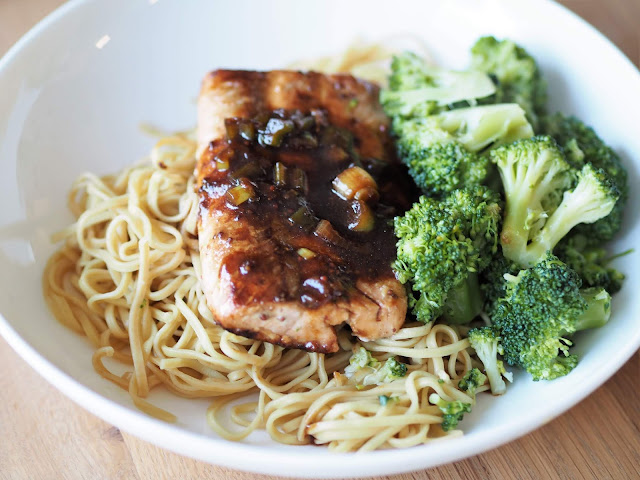 It's a simple recipe which all comes together very quickly and everyone liked it. I would have preferred a little more sauce to mix in with the noodles and broccoli, but I guess the need to keep things plain goes back to catering for young children and their need for things to not be "mixed in" but easily separated and identified. (Actually, Bella and Angus can still be a bit like that now....) 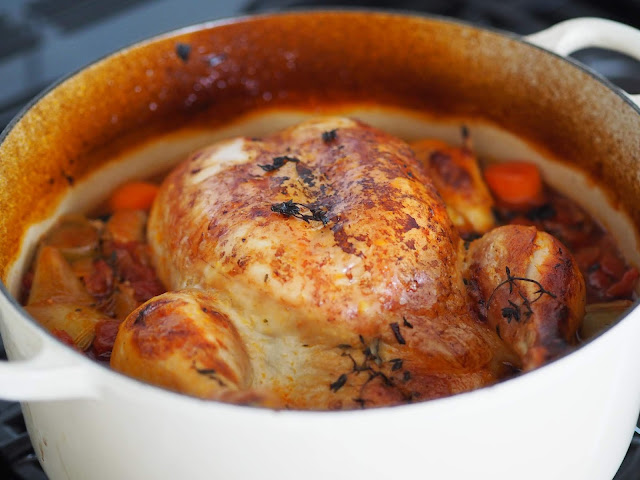 Next we have "chicken in a pot", or pot roast chicken. This was ideal for a Sunday night dinner when I want to feed everyone something hearty and a bit more special than weeknight fare, and have time to spend a bit longer in the kitchen, but can't be bothered to cook a full on roast dinner. 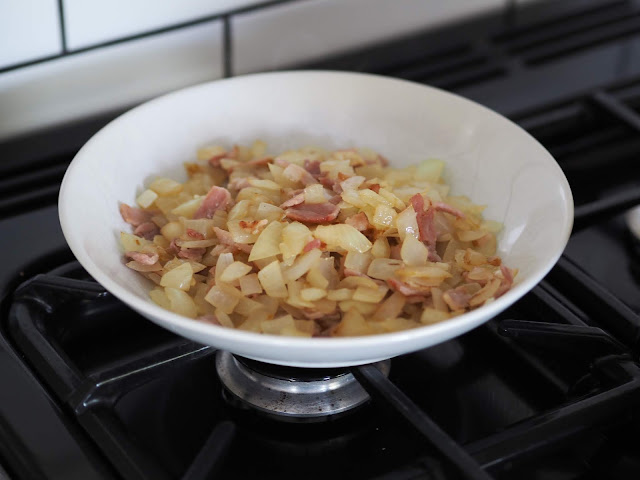 You begin by browning bacon and onions, before removing them and then browning the chicken in the same pan. Now, browning a whole chicken is no mean feat, let me tell you. It's like wrestling with two forks. Then you add carrots and leeks, the onions and bacon, plus stock, chopped tomatoes and herbs before bringing the whole lot to the boil and then putting it in the oven for an hour. 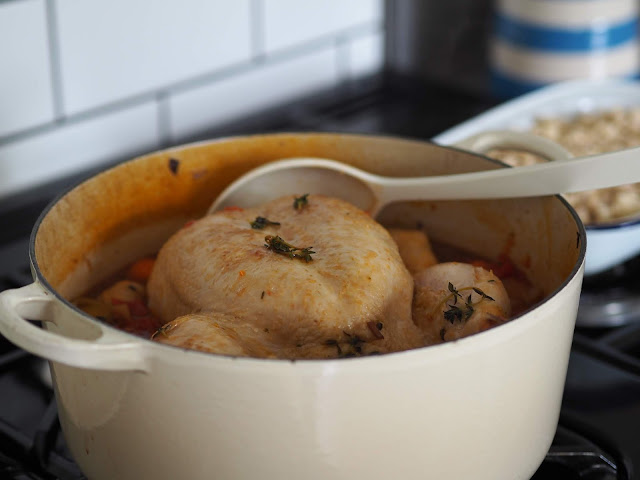 Half way through the cooking time you remove the lid, letting some of the liquid evaporate and the breast of the chicken brown a little. At the very end, you remove all the meat and vegetables with a slotted spoon and put them on a serving plate, before thickening the liquid left in the casserole dish into a gravy. 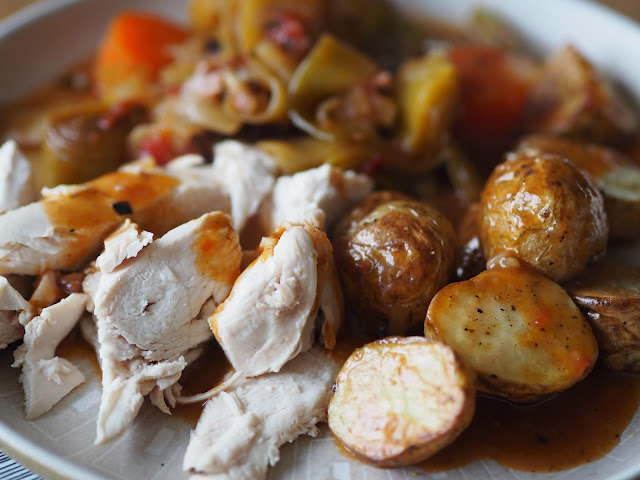 It's wonderful, as you would expect. The chicken is moist, the vegetables tender, and the gravy full of the flavour of bay and thyme. We ate it with roasted new potatoes. There was a lot more left over then I'd expected, quite a lot of meat, vegetables and gravy, and so we turned them into a leftovers risotto later that week.

I felt uninspired by the puddings chapter in this book but the "tea time treats" section was full of good ideas for cakes, lunchbox treats and the like. The "almond and apricot yoghurt-coated bites" caught my eye - little homemade cereal bars, topped with a yogurt icing. 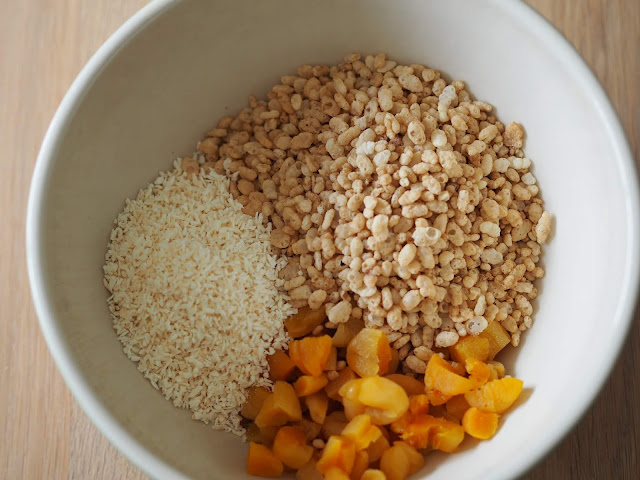 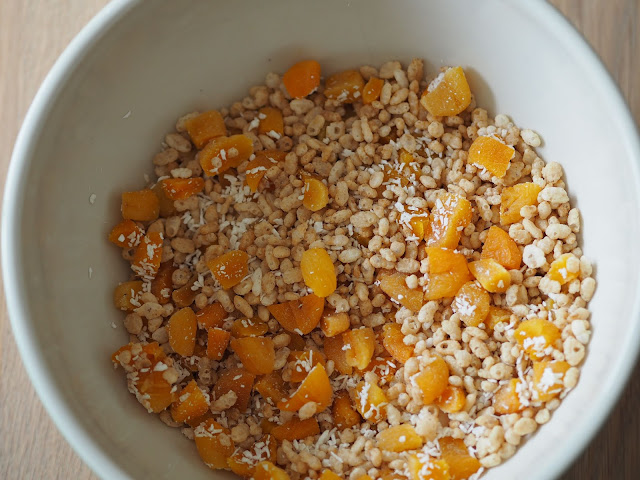 Next, melt together syrup, sugar and butter and let them boil a little to become more syrupy, then mix into the dried ingredients. 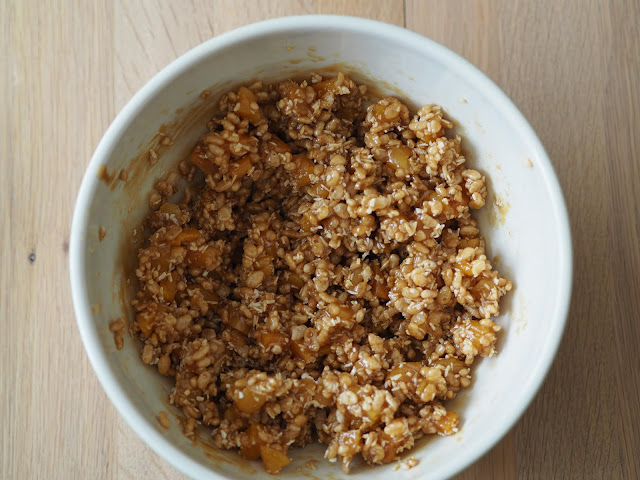 Then these sticky morsels are baked until they form round biscuity, chewy bites onto which you are supposed to drizzle a little icing when they have cooled. 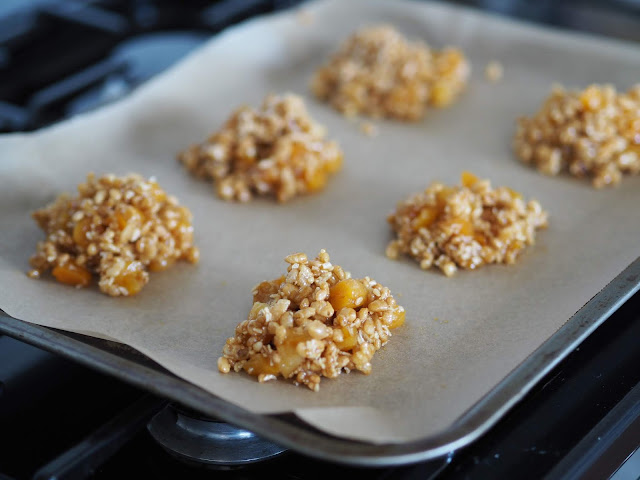 Except mine didn't work. They came out of the oven as crumbly and sticky as they went in, and could only be eaten with a spoon. I must not have let the syrup boil for long enough, so I baked them again, but still there was no way on earth I could call these lunchbox treats. 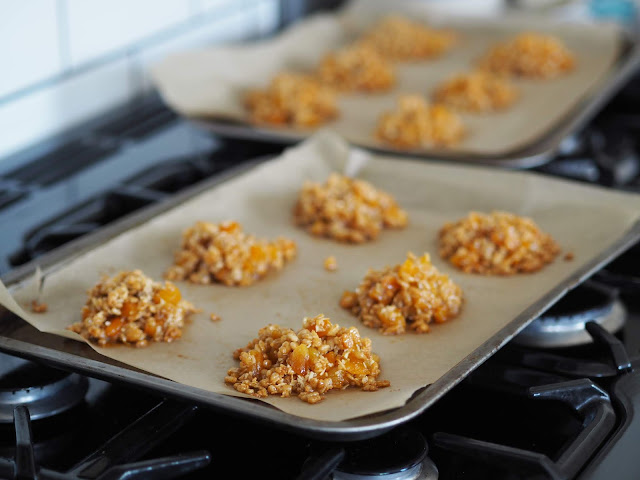 I scraped the lot into a tuppaware container where is was absolutely lovely scattered on top of Greek yogurt for dessert all week, sort of a DIY Muller Crunch Corner.

So, I am wondering now whether to hang on to this book or not. On balance I think it's earned its place on the shelf, certainly for a few stand-out recipes, although I would certainly substitute a lot of the meat for vegetarian options now. But our children, at almost-ten and twelve and a half, are no longer the small people wanting easily-identifiable food served on their yellow plastic Miffy plates. However, they are not quite old enough yet to embrace the kinds of food that John and I want to eat - they still remain suspicious of lentils, wary of chilli and flat-out refuse to eat aubergine. It's tricky, finding meals that everyone likes, that are easy to prepare, healthy and also budget friendly, isn't it? Thank goodness for pasta pesto.