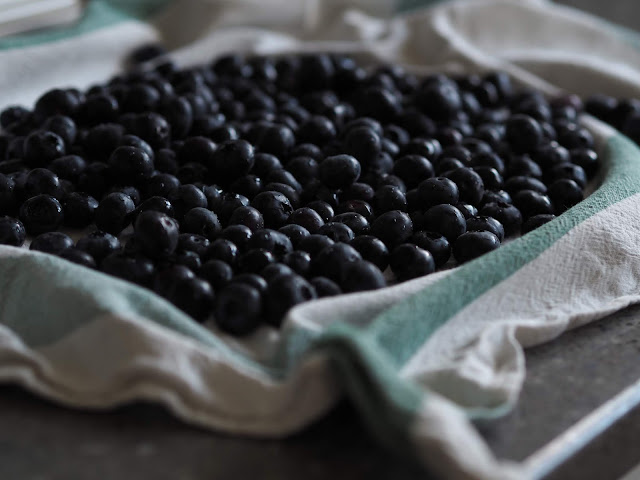 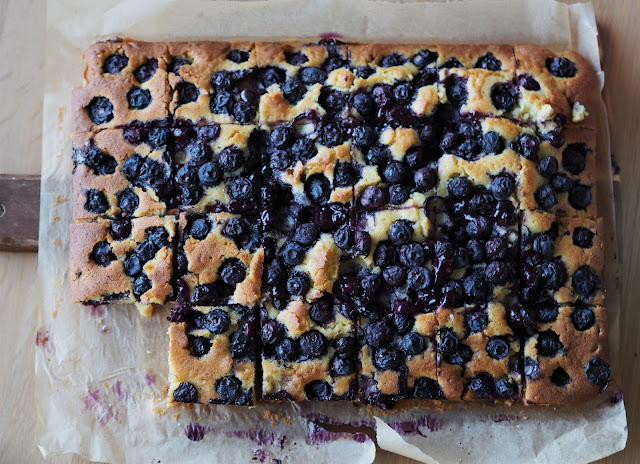 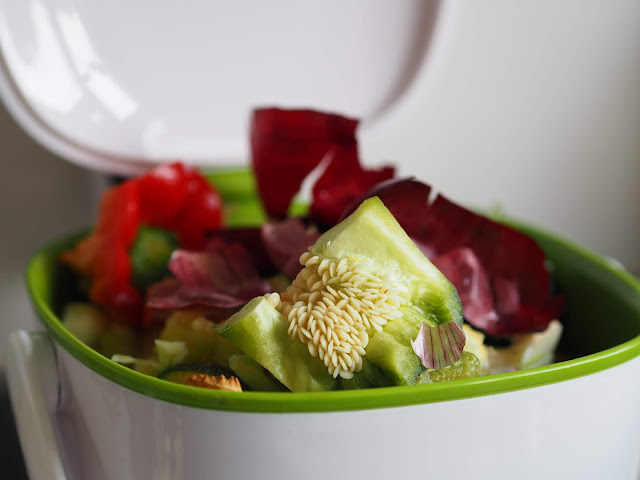 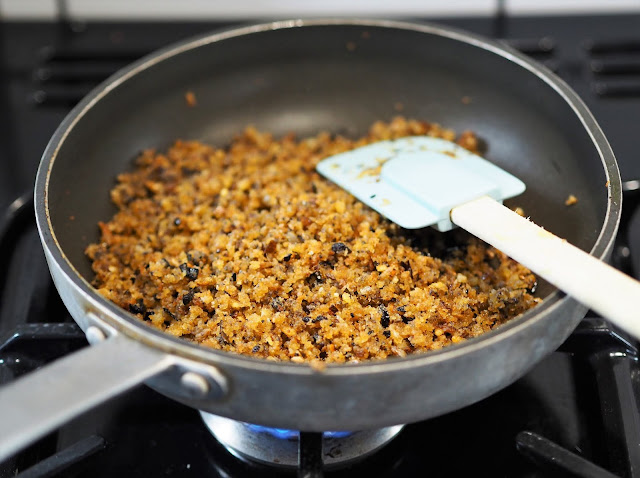 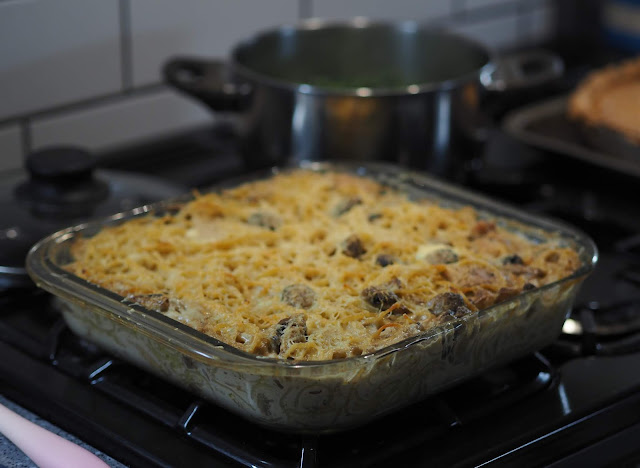 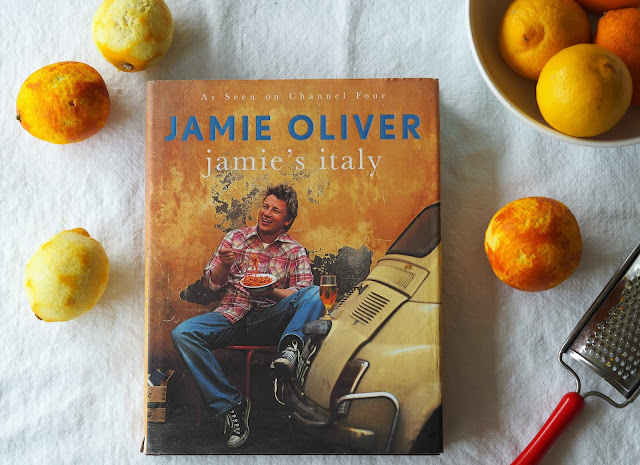 My chosen cookery book for March was Jamie's Italy, published in 2008, so most likely a freebie from when John worked in a bookshop many years ago.  It's an undervalued book that I've used a few times, but never really spent much time cooking from. It's clearly a lovingly researched book full of beautiful travel photography, and chapters are organised into Antipasti, Primi (soups, pasta, risotto), Salads, Secondi (fish, meat) and Desserts. I don't really understand the Italian way of having pasta then another second course after that - pasta is the one and only course in this house, unless someone wants to rummage for fruit or yogurt for dessert.

It was the pasta and risotto recipes which fitted most easily into the way I cook on a weeknight, both in terms of preparation time and cost of ingredients, and the first one I chose was a twist on a favourite here, spaghetti carbonara, but made with sausage meatballs rather than the usual pancetta. 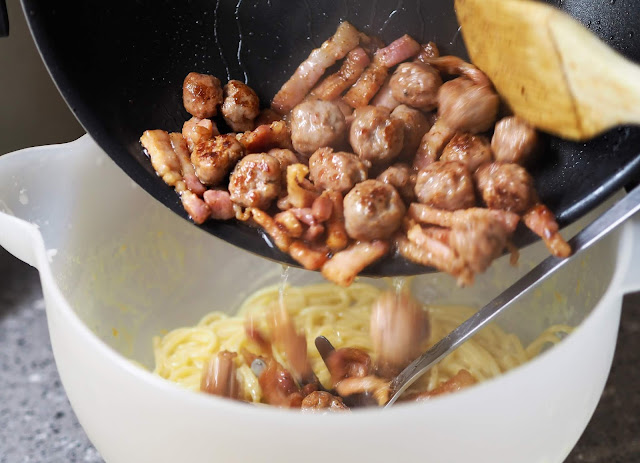 You skin sausages, form them into little bite-sized balls, then fry while the pasta cooks. The sauce is your standard carbonara except for the addition of the zest of a lemon. 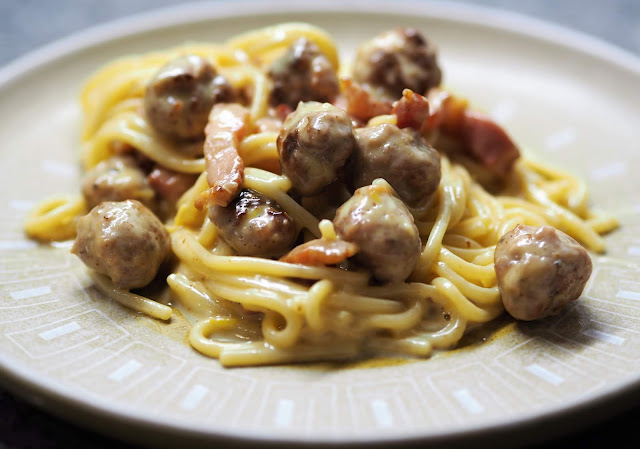 I was dubious, I'll be honest, but it was transformative, and easily the best carbonara I've ever eaten at home. John and I loved it. Bella and Angus however disliked the (tiny) addition of the lemon zest and said it was "too fruity". Kids, always wanting what is familiar... 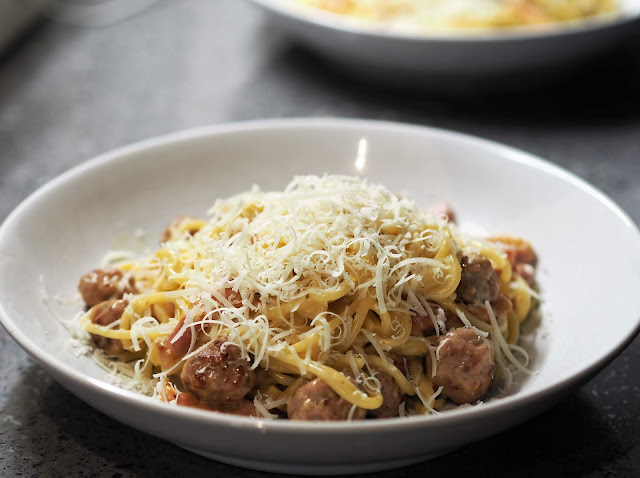 Next was a chicken and mushroom pasta bake, but made with spaghetti, and I was intrigued how this would work. Also, as the only one in this house who likes mushrooms, I was deviously hoping I could sneak the fungi past everyone else and create a new family favourite. 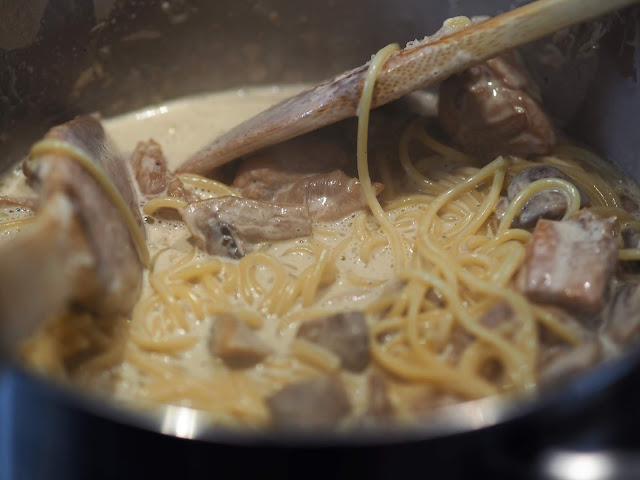 You fry the chicken and mushrooms before adding stock and cream and simmering while the spaghetti boils. The pasta and sauce are then baked with a topping of breadcrumbs and parmesan, very delicious. 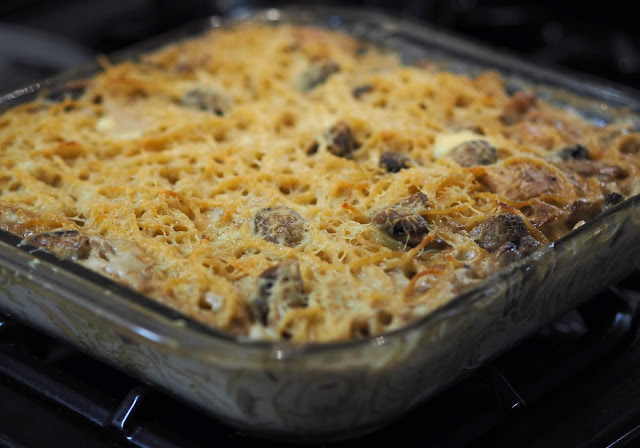 I loved it, but the other three members if this household were indifferent. Too mushroomy, apparently, but I did enjoy eating up the leftovers reheated for my lunch at work the following week.

Our next recipe, cauliflower risotto, was much more successful. 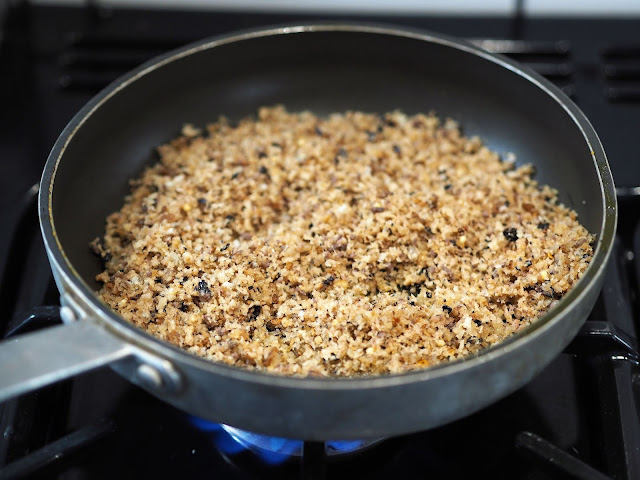 You begin by making a pangrattato, a mixture of breadcrumbs, anchovies and chilli which is fried until crispy and sprinkled over the finished risotto at the end. 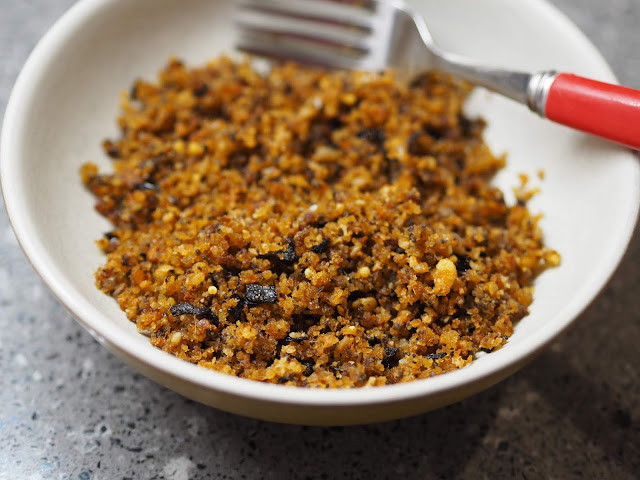 The rest of the risotto is fairly standard. The cauliflower stalk is finely chopped and added to the onion, celery and garlic at the start, while the florets simmer in the stock until soft before being gently crushed into the risotto. 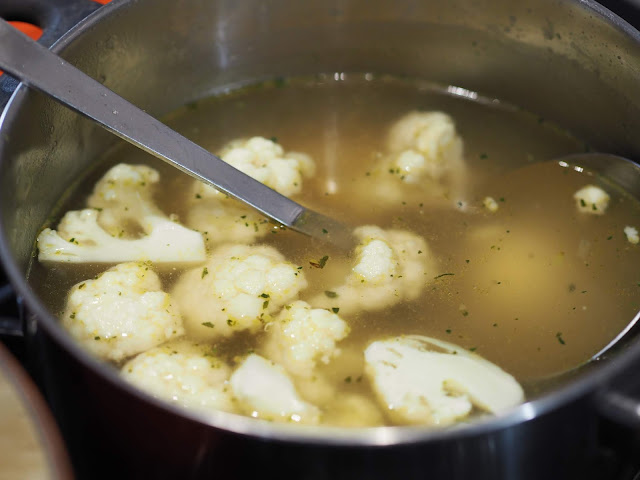 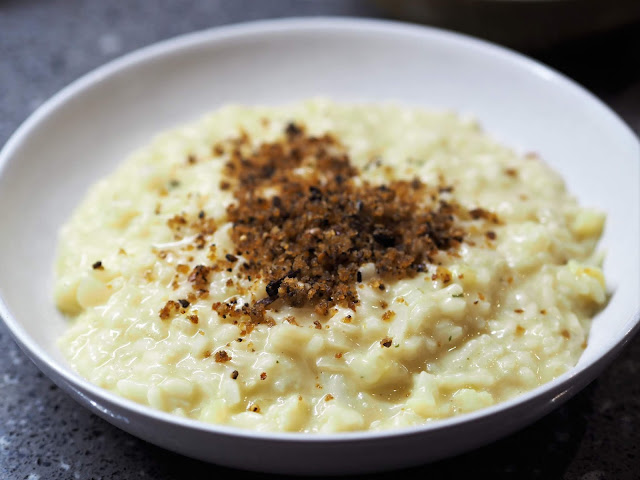 The result was a heavenly cross between a plain risotto and cauliflower cheese. It had flavour and texture and was creamy and delicious. I didn't think the pangrattato was necessary really, it would be lovely on it's own, and I am definitely going to make this one again.

Next, a lunch recipe from the salad chapter: farro salad with roasted veg, although I used bulgar wheat. 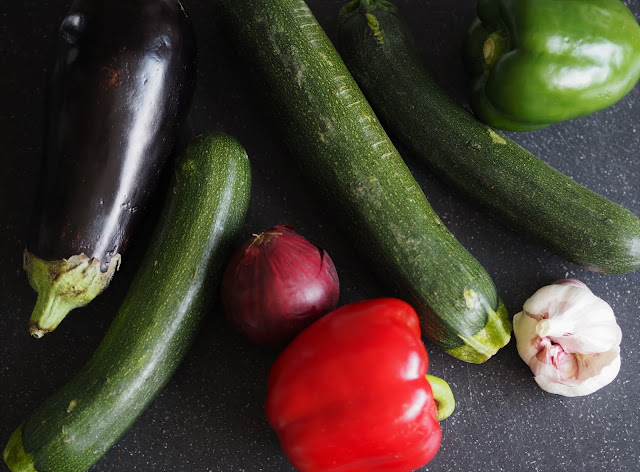 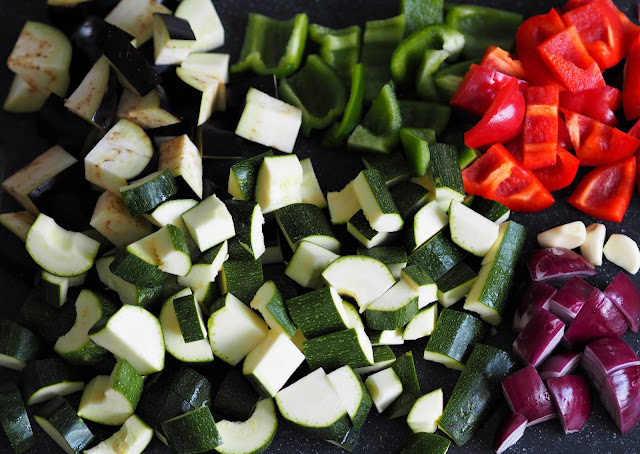 You roast some vegetables while the bulgar wheat is simmering, and then finely chop the cooked vegetables with lots of fresh herbs. I used basil and parsley from the supermarket with oregano and mint from the garden. 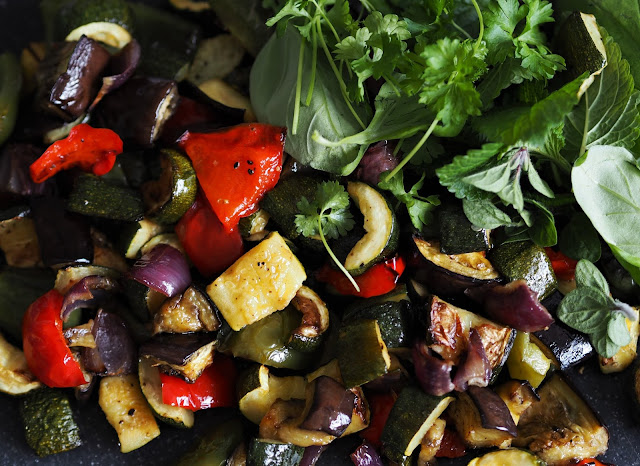 Then everything is mixed together and dressed with a little olive oil and lemon juice. 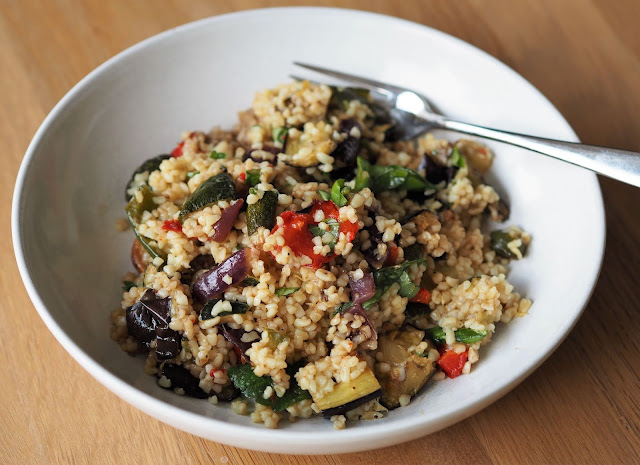 It's fantastic, you don't really need a recipe for a salad like this, and I will definitely make it again. I felt it could have done with a little more oomph though, perhaps a little feta sprinkled over the top, so I used the pangrattato leftover from the risotto to give it a bit more of a kick.

Finally, I tried something from the Desserts chapter. This was a bit of a struggle which surprised me; the desserts felt too summery for a cold, wet March, and I was trying to choose something which everyone would enjoy, not just me. 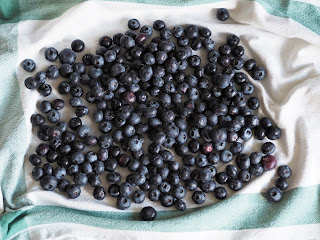 I chose Nada's cake, a plain sponge cake scented with orange and lemon zest and scattered with blueberries. 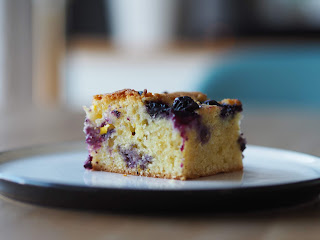 I love blueberries but find them a flavour lottery, being either very sweet or sharp. These were sharper and I felt the cake batter could have done with a little more sugar. Anyway it was ok - nice but not amazing. It makes a large tray bake though, so I froze half of the cooked cake as I thought it might be nice defrosted, warmed and served with a little creme fraiche.

So, overall I'd call this a success - three nice meals and two really good ones which will definitely make it into our repertoire of family dinners.