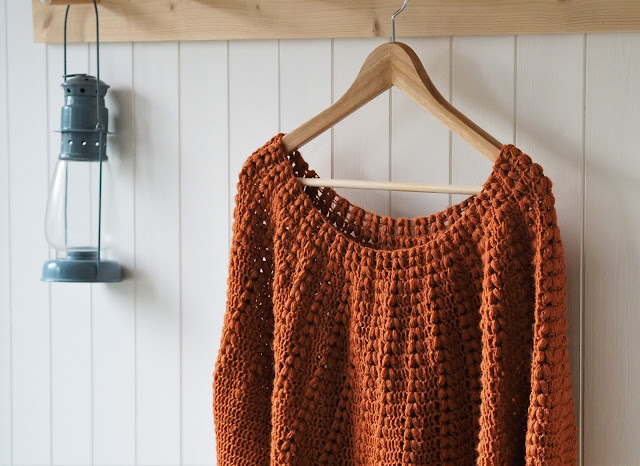 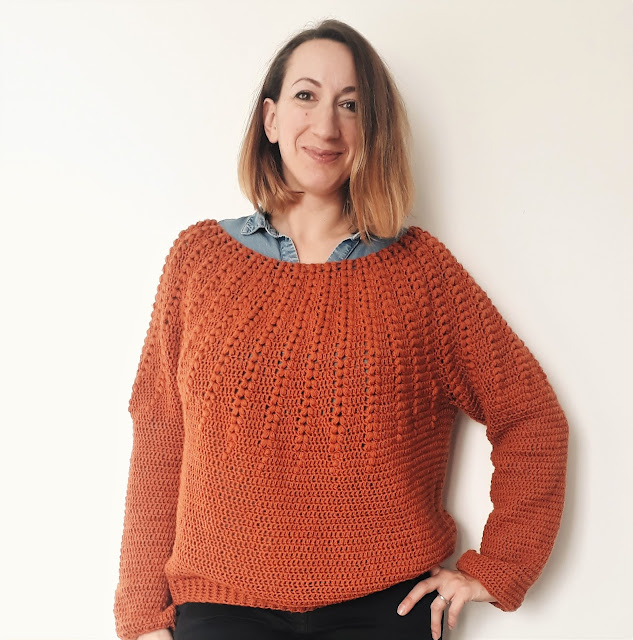 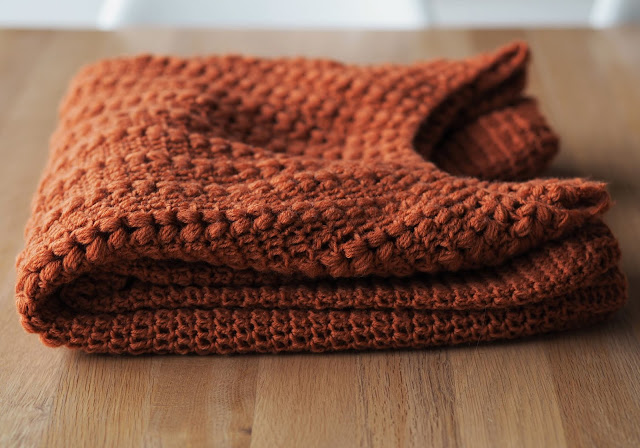 For a long time I held the opinion that, when it came to woollen clothes, knitting had the edge on crochet. I thought that crochet, that yarn-eater of a craft, was better suited to warm blankets and scarves, or open, lacy shawls, and it seemed that most of the crocheted jumpers, cardigans and tops I saw on Ravelry were not something I would ever want to make or wear. But thankfully that seems to be changing as more and more crochet designers are producing patterns for garments that don't look like they were made from scratchy yarn in 1987, and are actually photographed and styled in such a way that they are appealing.

Via Instagram, that goldmine of crafting inspiration and my favourite time-wasting activity, I stumbled upon Eleven Handmade and her Goldenrod sweater, and fell instantly in love.

I bought the pattern on holiday in Devon last year, while browsing Etsy on my phone in bed (funny how I remember that) and, impatient to be started, ordered the yarn at the same time so that it would be ready to start when I got home. However life got in the way and I didn't actually begin the project until October when I got as far as the shoulders, before putting it to one side as Christmas gifts took precedence. I picked it up again in early January and have been steadily working on it a little most nights since then, a few rows here, a few there. 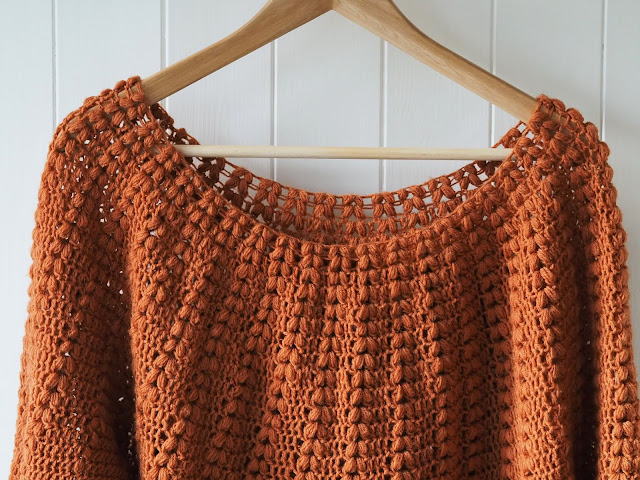 The pattern is made up of trebles and puff stitches, with a little front and back post stitch at the cuffs and hems. It starts at the neck and works its way downwards until you stop at the arms, leaving two holes to join the arms later, and continuing down the rest of the body. 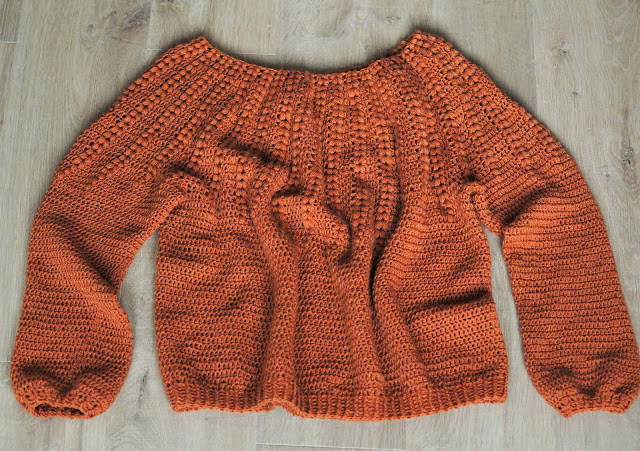 It's crocheted in the round, with a subtle seam marking the beginning and end of each row, just visible at the back. 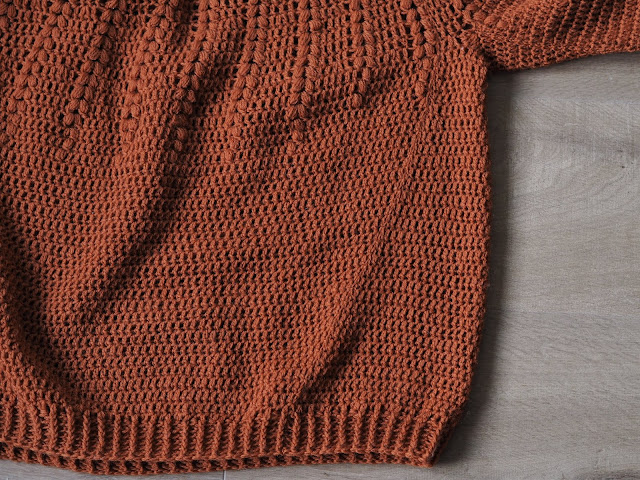 The front and back post stitches create a ribbed effect and give a neat, tight finish to the ends of the arms and body. 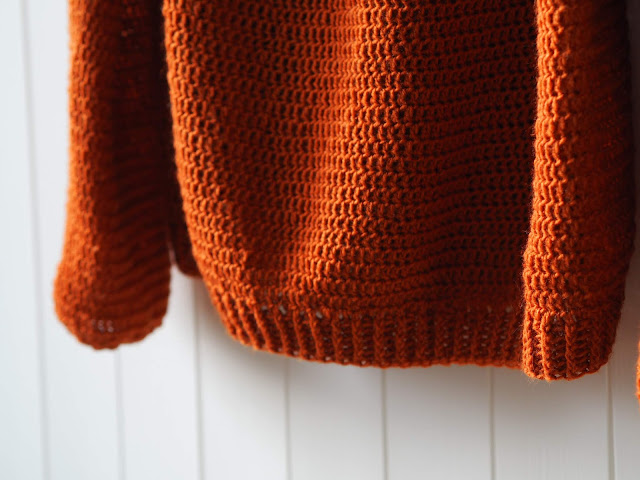 I really like it and know that it will definitely be something I wear a lot. I prefer to wear block colours over pattern, and favour blue, grey, black and mustard in my wardrobe (as well as a lot of striped tops) so this jumper will go well with my clothes, especially my black and grey jeans which I wear to work a lot. Here I'm wearing it with a denim shirt underneath in the left hand picture, but it works with a crisp white shirt, long sleeved t-shirt or just a vest too, as in the right hand picture. 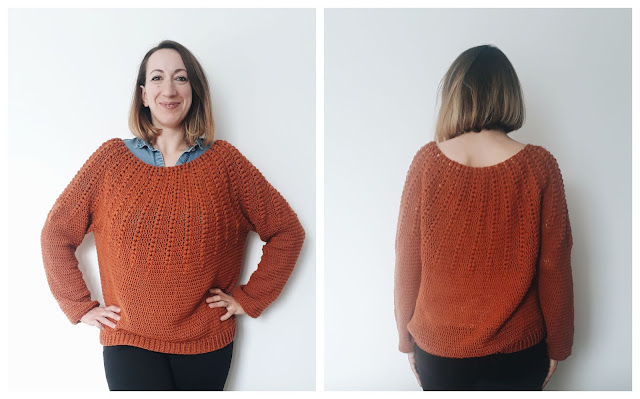 The pattern specified fingering/2 ply weight yarn, but all the ones I found seemed expensive, so I chose Drops Fabel which is a 4 ply/sport weight yarn that is well priced and machine washable. (I like Drops wool a lot and am using it more and more.) The pattern stated 600g of yarn, so I bought twelve 50g balls in Rust, but actually only used nine. I'm not worried about the three leftover balls, they will make a great shawl. So, with the cost of the pattern, the whole thing came in at under £28 which I think is fantastic, given that a good wool jumper costs upwards of £40 or £50. It came out a little baggier than I was expecting and, if I make another, I will go down a hook size from 4.5mm to 4mm for a slightly tighter stitch definition.

Thank you so much for all your suggestions for what to watch on TV. What did we ever do without Netflix? We've just finished The Ted Bundy Tapes and they were alternately fascinating and sickening, as you'd imagine. I feel like something a little more upbeat now. Life is busy here at the moment but good - it's half term next week so we are counting down the days until then.
Posted by Gillian Roe at Tuesday, February 12, 2019