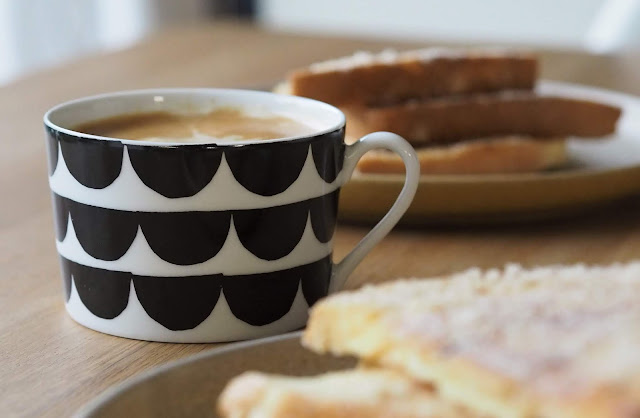 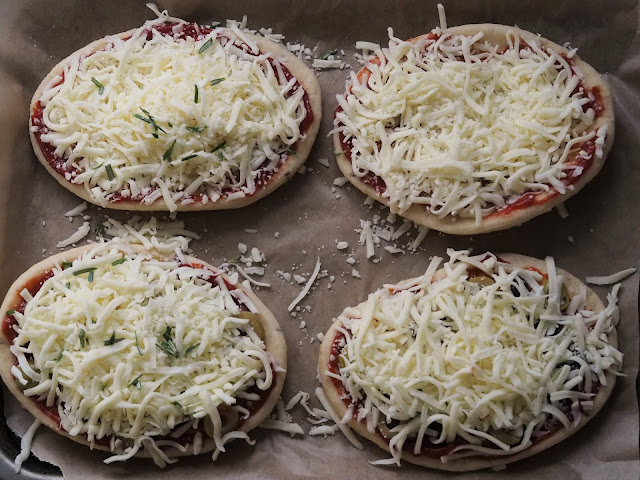 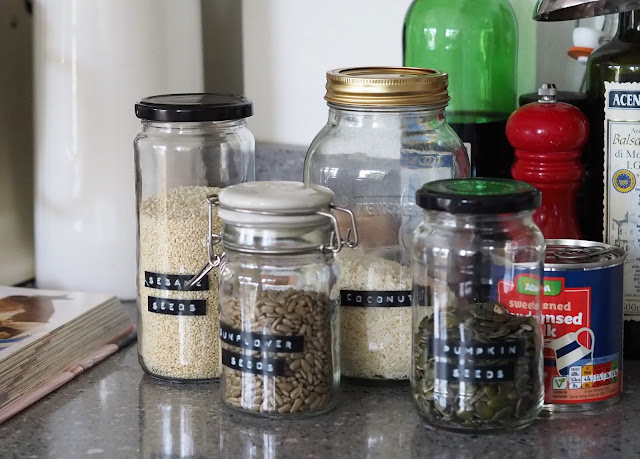 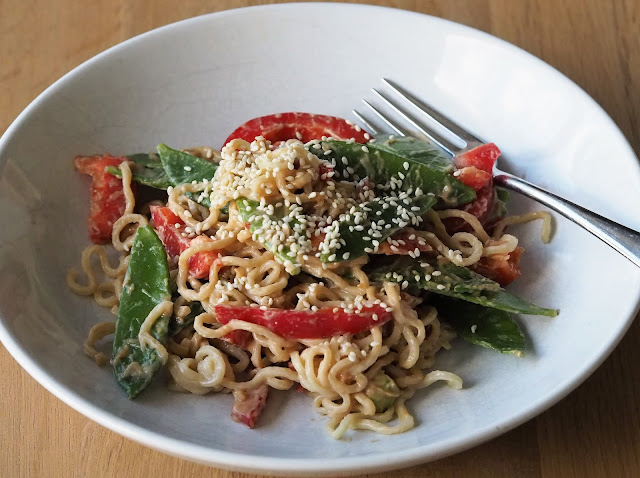 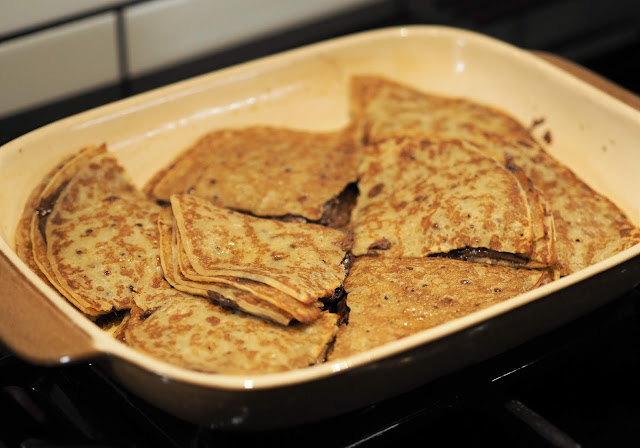 This month, like last, saw me reaching for a cookery book that I do actually use a lot, but only for the same two recipes and that's a bit of a waste, to put it mildly. My book for February is Nigella Express 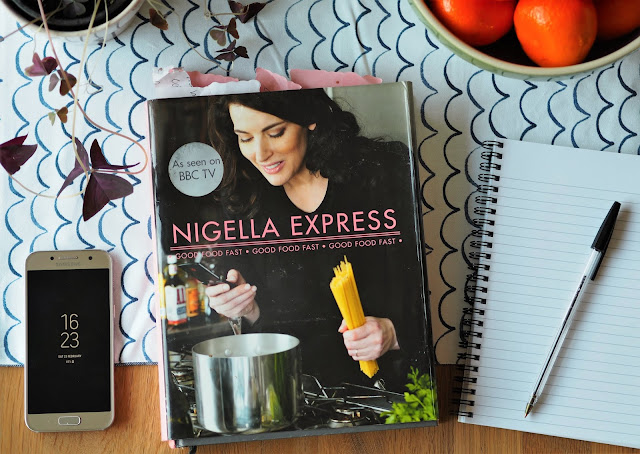 I always like Nigella's books because they are so well tested, and you know that the timings and quantities are going to work, even if some of the ingredients are a bit random or expensive. This is a book packed full of recipes and ideas - and there are some really good recipes in here - but the promotion of ready chopped, plastic-packaged vegetables, the idea of speed and convenience above all else, well these felt a little out of tune with the way we, or at least I, shop now. But that's about the worst thing I can say about this book - other than that, it's a lot of fun. Chapters are themed in an entertaining way (retro, party, Italian, Mexican, Christmas) with some particularly good suggestions for breakfasts and packed lunches. Every recipe has a photo (yay!) and the layout and type are clear and easy to read. Plus is has that wonderful thing, a fabric bookmark attached to the book.

We cooked from this book over half term and I decided to hand the book over to Bella and Angus and asked them to choose some things they would like to make. This could go one of two ways (pudding for dinner every night?) and I was intrigued to see what they would pick. 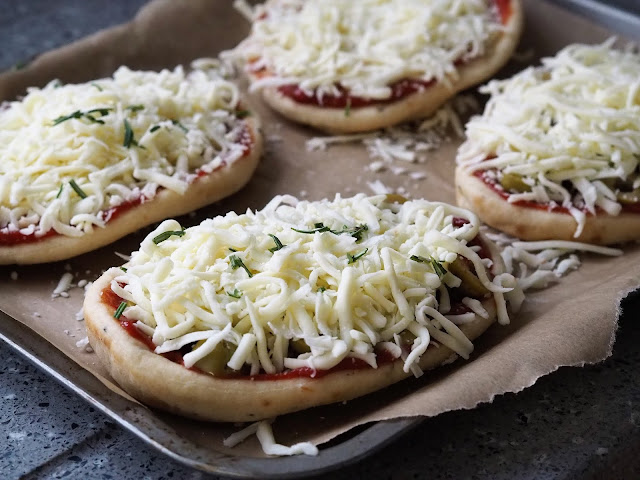 Bella's first choice was Naan Pizza. I make homemade pizza a lot, but always with a pizza dough base and I've never tried naan or tortilla with a topping like this. It was so quick and easy, the work of moments: tomato sauce and cheese for the kids, extra olives and anchovies for John and I. It was a good Saturday lunchtime option, and would work as a teatime meal for the kids with some extra vegetable and maybe homemade chips. The kids preferred normal pizza but gave it 7.5/10. 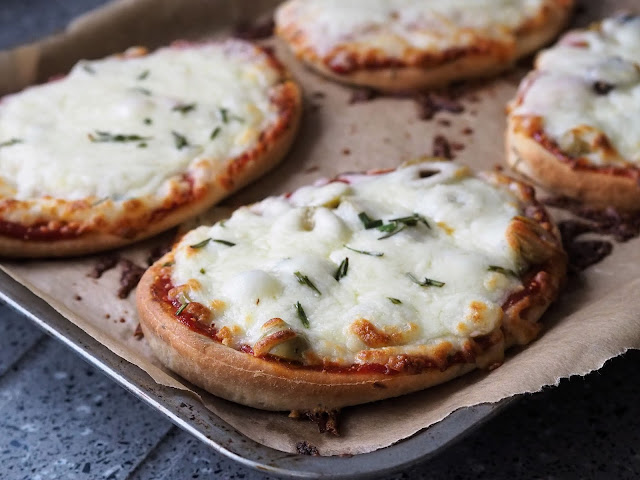 Bella surprised me next by choosing Chicken Schnitzel with Bacon and White Wine, or simply chicken breasts butterflied and pan fried quickly with bacon before de-glazing with a little white wine to create a sauce. It was a lot nicer than this photo suggests, and we ate it with buttery mashed potatoes and green beans. I thought the leftovers would be nice in a salad or sandwich but there weren't any. 8/10. 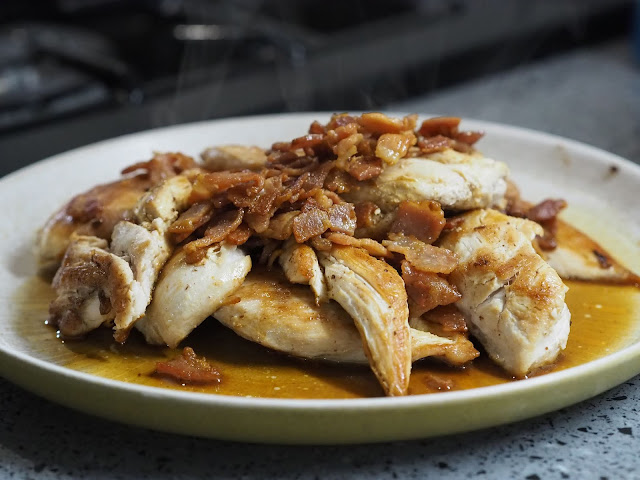 Her next choice was Macaroni Cheese, one of Bella's favourite and most requested meals. I usually make a cheese sauce with milk, flour and butter but this involved cooking the pasta, then putting it into an oven dish with two eggs, a tin of evaporated milk and a lot of grated cheddar cheese. 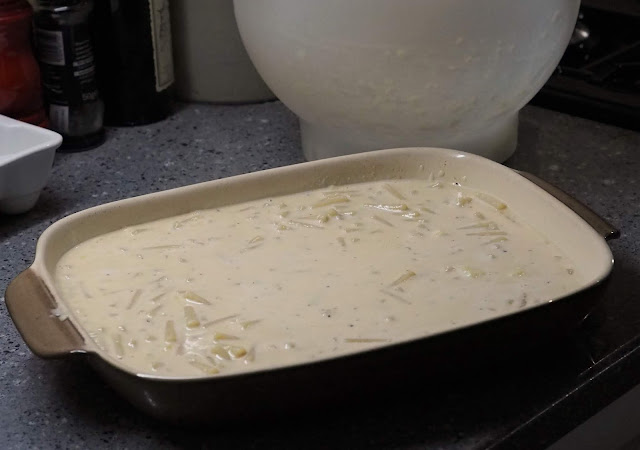 It looked revolting when I put it in the oven, with the macaroni swimming around in all that liquid, and I was worried it was going to be awful. 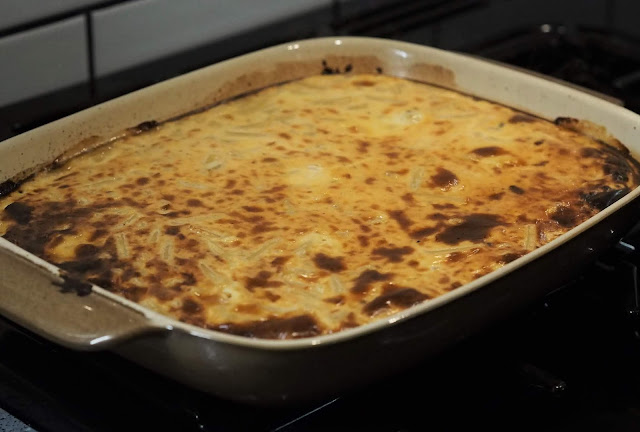 It was different to my usual macaroni cheese but just as good, with the bonus of less washing up. The children, however, always wanting what is familiar, gave it a mere 7/10, a bit harsh I thought because it was tasty.

Bella's last choice was Chocolate Peanut Butter Fudge Sundae. Three types of ice cream (vanilla, chocolate and caramel) topped with a sauce made from chocolate, cream, syrup and peanut butter melted together. Obviously it was amazing and unsurprisingly scored a kid rating of 10/10, but I think they were just excited that there were three different kinds of ice cream in the freezer, not the vanilla I usually buy. 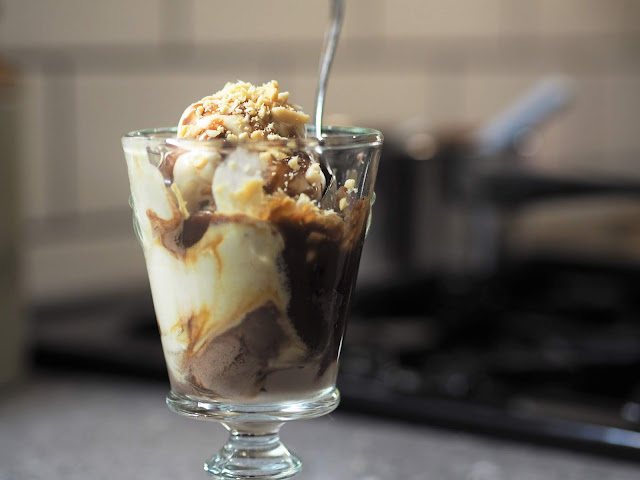 Angus didn't choose any meals. The most sensible option he could come up with was Breakfast Bars: nuts, seeds, oats and dried fruit coated in a tin of condensed milk then baked. A bit like a flapjack, but with just one liquid ingredient rather than the butter, sugar and syrup I would usually melt together. 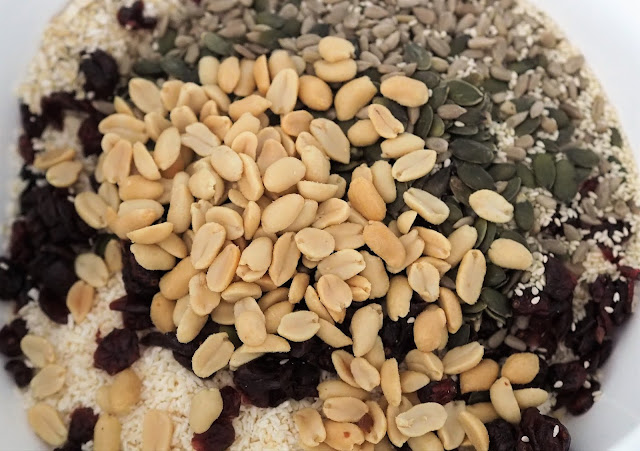 No-one wanted them for breakfast, but they were ideal for mid-morning or afternoon snacks. I forget how much the children want to endlessly eat when it's half term. Angus says 9/10. 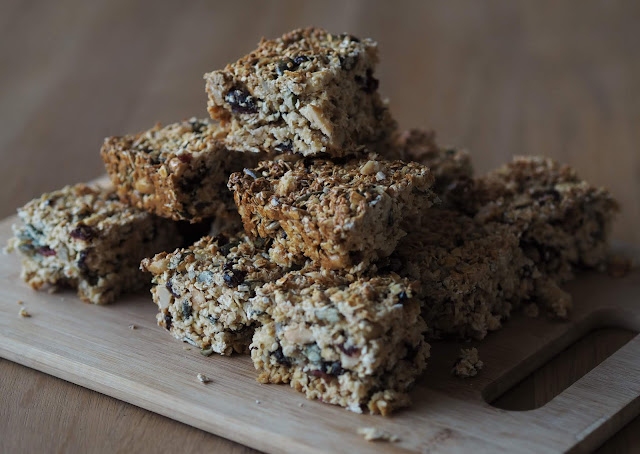 He also chose Doughnut French Toast, so-called because the sweet eggy bread is dredged in caster sugar before eating. I have made this before but happened to have a stale loaf of sliced white bread, so I agreed to make it again. 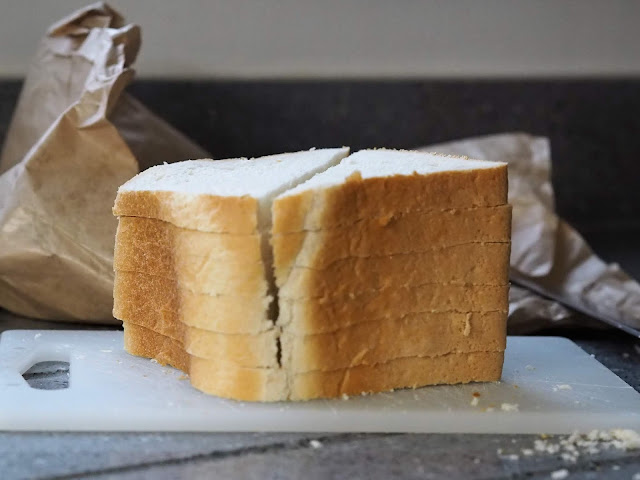 He was disappointed that I wouldn't allow maple syrup on top (!) but still gave it 8/10 saying that pancakes and waffles are better. I liked it but felt it needed something alongside it - not a syrup, but perhaps just some sharp fruit compote to cut through all that sweet stodginess. 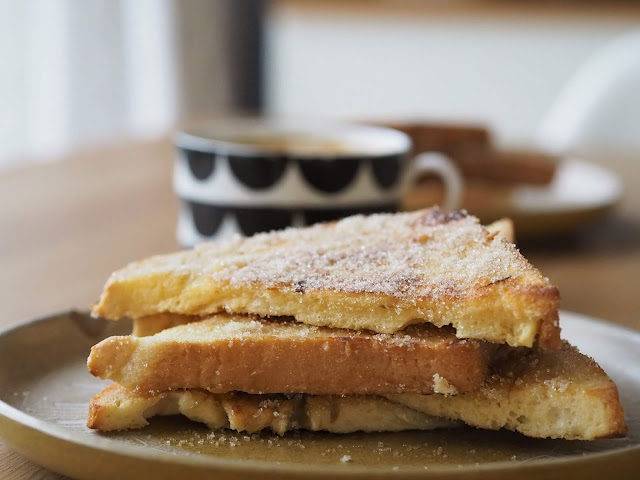 Angus's third choice was Nutella Pancakes, simply a packet of ready-made crepes, spread with hazelnut chocolate spread, folded, and coated with melted butter before being baked. 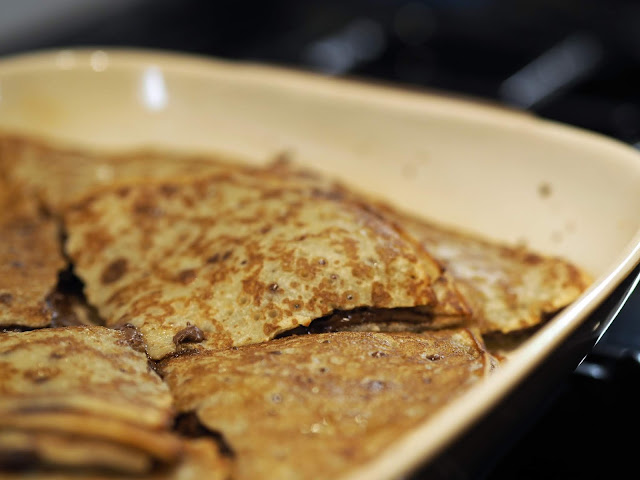 On reflection two pancakes each was a bit much but there were four clean bowls afterwards so that says quite a lot about what a successful dessert this was. Full marks for this one. 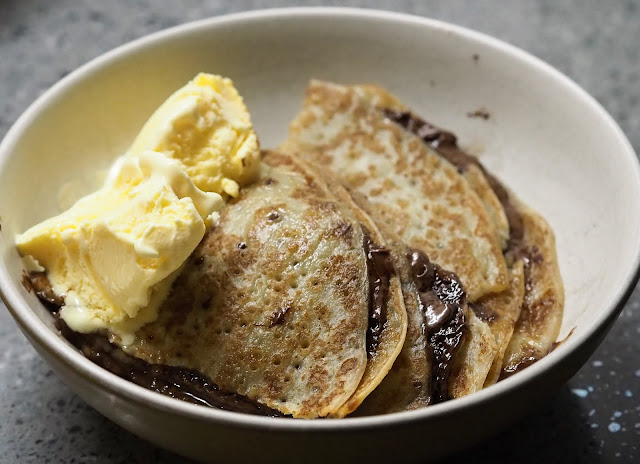 Finally I got to choose a couple of meals, and my first was Sesame Peanut Noodles, a cold lunchtime salad. I work in a nut free school so can't take this to work, but really enjoyed having this for lunch throughout the week at home. The combination of sticky sauce and crunchy vegetables was perfect, and the noodles gave just enough substance to the meal to stop me feeling hungry two hours later. 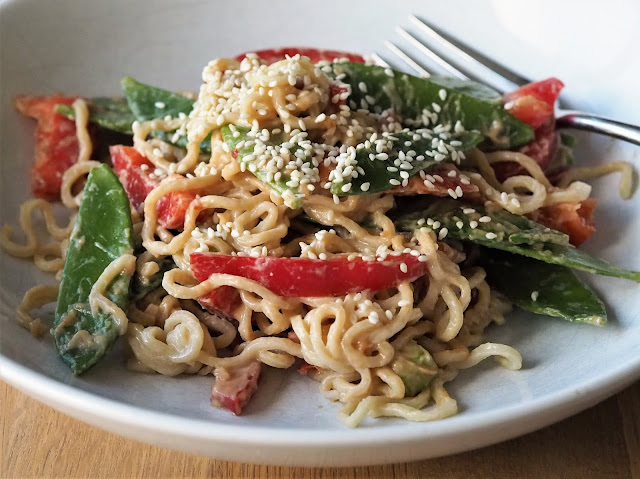 Finally, Sausages with Halloumi and Peppers. This was one of those assembly jobs or a meal: spicy sausages baked with a jar of roasted peppers and sliced halloumi. 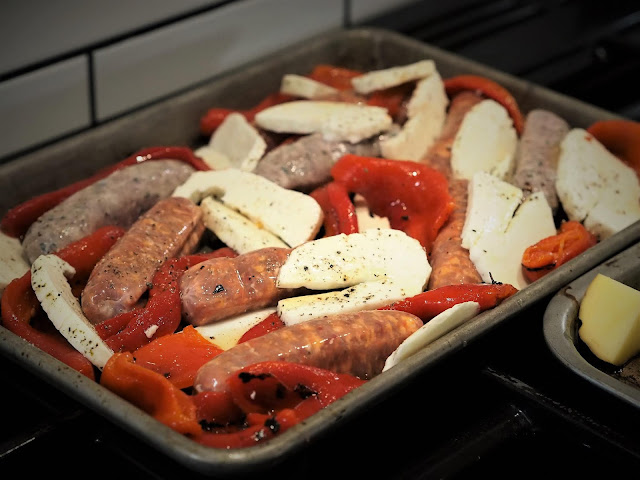 I served it with potato wedges and some greens and it was completely delicious. At least I thought so - it reminded me how much I love halloumi and why don't I buy it more? Well, the kids found the sausages too spicy, the peppers too salty and the halloumi too squeaky and were generally underwhelmed. Don't worry, I finished up what they left. It was fantastic. 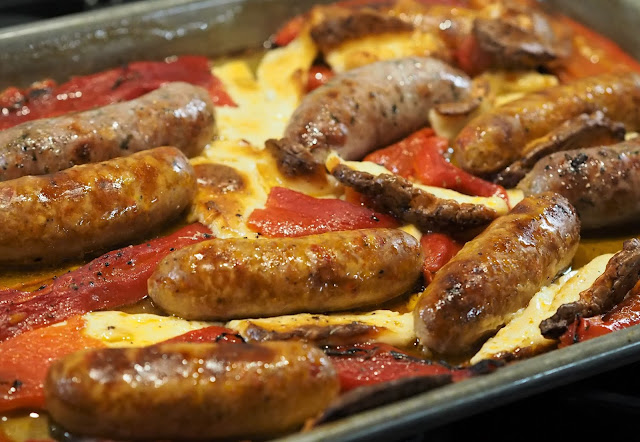 So, I'm not sure how many new family meals we discovered in this book, but we did have a lot of fun cooking together and eating much more exciting desserts than we normally would. I'm not sure I'll be handing over the reigns to Bella and Angus for a few months yet - my waistline needs to recover from all that chocolate.
Posted by Gillian Roe at Thursday, February 28, 2019