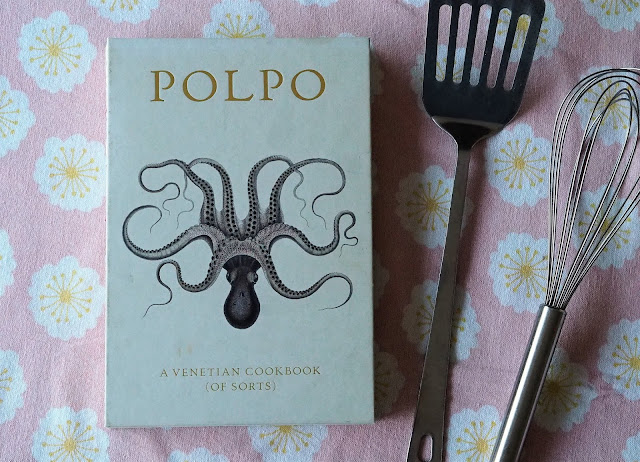 Yes, that's right, July's Cookery Calendar Challenge, which I did in August and am bringing you in September, on a chilly Thursday night which has more than a hint of autumn in the air.

I chose the book POLPO: A Venetian Cookbook (Of Sorts)

by Russell Norman, which isn't the sort of thing I would normally buy so I think it may have been one that John bought or was given. Visually it's gorgeous with a striking cover and as many photos of Venice as of the food. It doesn't have that essential, a bookmark, but does have a clever spine which is missing it's central cardboard panel so that the book, when opened, stays completely flat and never needs propping open, very useful when you're cooking from it. It could be really pretentious, this book, but is actually very down to earth and seasonal without being too aspirational or calling for too many expensive ingredients, although I do get annoyed when British authors insists on chucking Italian (or any other language for that matter) words into a recipe title because, unless I use google translate or read down a long list of ingredients, I don't have any idea what I'm actually cooking.

First was Risi e Bisi which means, simply Rice and Peas, or pea risotto. You need for this fresh peas, still in their pods, which I've never bothered with before, but was easily able to get in Waitrose. I wasn't really sure what the difference would be until I ate them and then I realised why you need them; they are sweeter, firmer in texture, fuller in flavour and the pods form the basis of your stock. 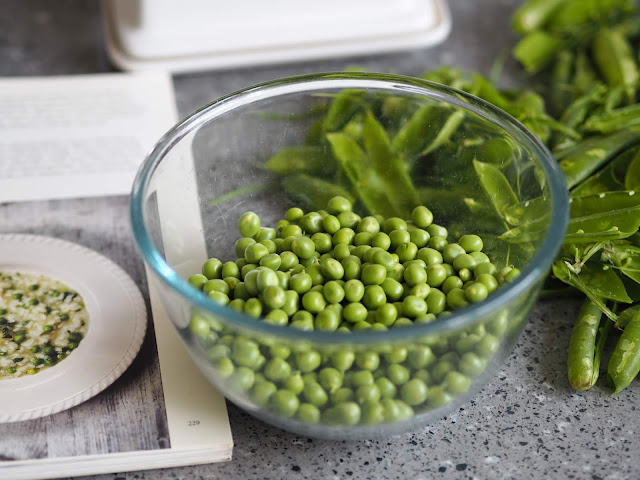 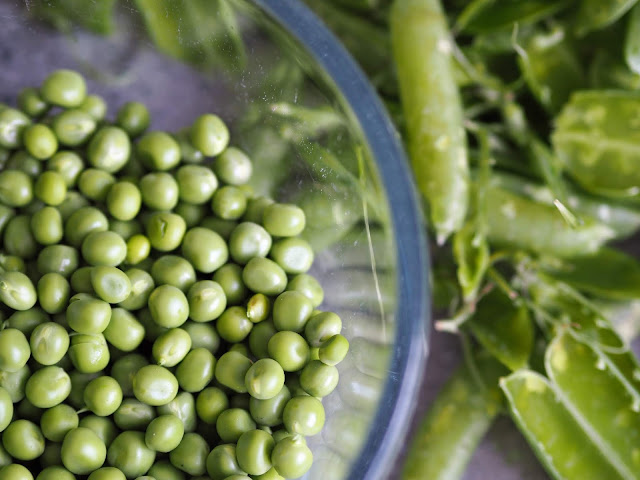 The recipe suggested adding pancetta, which we did for the flavour, but I think it would be lovely with simply the peas too. 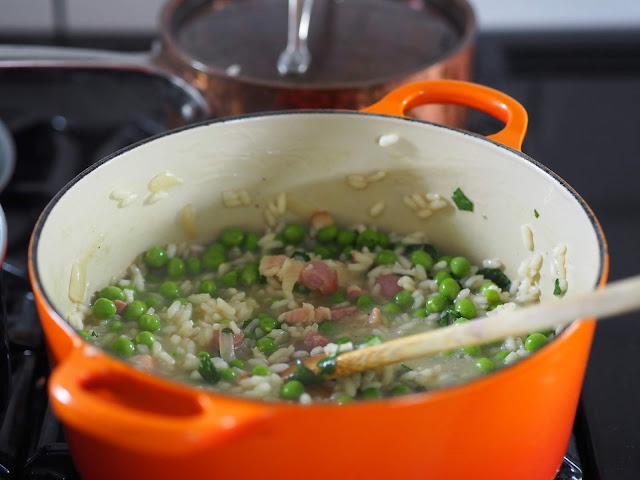 I don't tend to add fresh herbs to my risottos usually, but this used parsley and mint and was so good, with a light summery flavour. Top marks all round for this one.

Next, also from the vegetables chapter, was Cavolo Nero, Gnocchi and Pecorino Romano; gnocchi in a kind of pesto sauce made from cavolo nero. 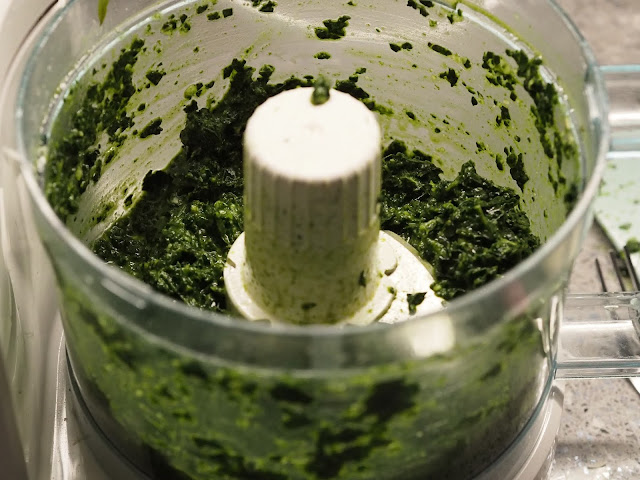 The sauce is easy; cook the greens briefly then blitz with olive oil, garlic and pecorino although I used parmesan because that's what was in the fridge.

The gnocchi, however...you'll notice that this is when the photos stop. I was trying to do this late one night before John got in from work (no chance my kids were eating this!) and the dog was underfoot and it was all a bit stressful. You have to boil the potatoes and then, when they're cool, grate them into a bowl and add egg and flour, which you then knead into a dough. I've never made gnocchi before so wasn't really sure how wet the dough should be so just used my instincts and made it up. Then you roll the dough into strips, chop into chunks and boil. My chunks were messy and missapen but they did cook, rising to the top of the water in a minute or two, before being tossed with the sauce. What a palava.

Luckily they were delicious and totally different to the shop bought gnocci, less gluey and sticky and much lighter. John found the sauce overpoweringly garlicky and didn't like it as much as I did. I think it was a gnocchi/sauce mismatch for him, and he would've preferred those potato dumplings in a different sauce, perhaps a simple tomato marinara sauce. However, the leftover pesto we ate with shredded chicken breast, more cavolo nero, and pasta and it was actually much better that way. I'll definitely make gnocchi again but not with this sauce.

I also baked the Flourless Orange and Almond Cake but totally forgot photos. It's not a pretty cake at all, almost more of a dessert, but so SO good and one of my favourite things to make. It's lovely served warm with a runny orange syrup and a dollop or marscapone or creme fraiche. This recipe is almost identical, just without the syrup, if you fancy making it.

I'll leave you with a picture of Millionaire's Shortbread, something I don't often make because it's quite time consuming but Angus, in a cafe one day on holiday while eating a slice, said wistfully "Mum, I really wish you knew how to make Millionaire's Shortbread." to which I replied "Err, I do" and he basically looked at me like I'd told him Christmas was coming early. Honestly, if I'd known that was all it would take to earn his respect and adoration, I'd have made it sooner. I like it although I find it a little too sweet, but it's a crowd pleaser and I took some into work to try to win over my new colleagues. Bella says's it's better than the one in Costa...such an accolade. 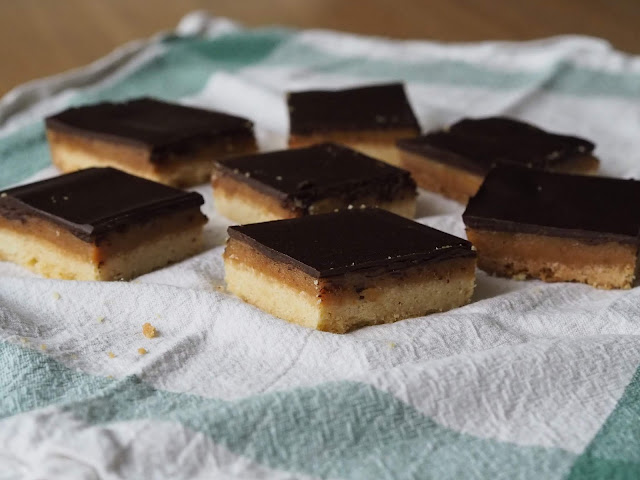 The new role is going well so far although I am tired. Being based in the classroom is so very different to being in the office, in more ways than one, and I'm missing those two hours alone in the house before I go to work. People who work all day Monday to Friday - when do you do your housework/washing/shopping etc? I need your tips! A little every day or all on a Saturday morning?

Last of all, my blog has been nominated again for an Amara Interior Blog Award in the Craft Category. Thank you, whoever that was - you have no idea how much that means to me. If you would like to vote for me the link is here.
Posted by Gillian Roe at Thursday, September 06, 2018