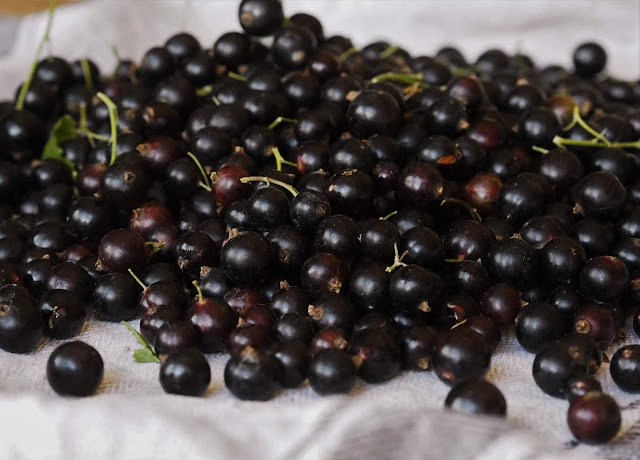 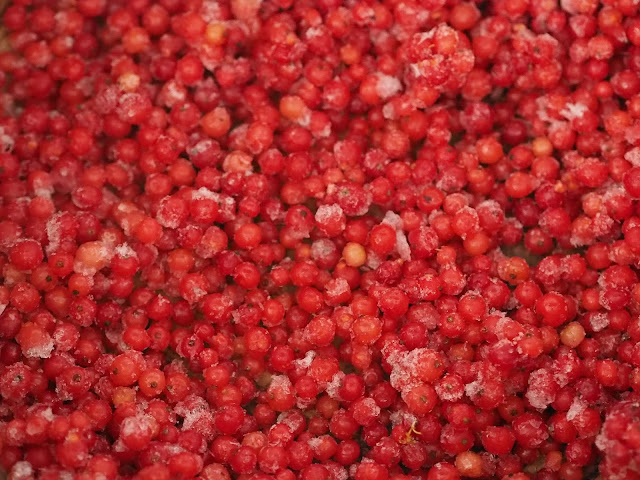 Welcome to July's Making the Seasons post, the summer fruits edition. As always with these posts, my intention is to make time for some kind of seasonal and creative activity, be that sewing, dyeing, crochet, gardening or in this case cooking. I'm doing this with my friend Lucy of Attic24 and our hope was that you might feel inspired to do something similar too. The heat has meant that I've felt no inclination to bake over the last few weeks, but I have still enjoyed pottering in the kitchen, always one of my favourite places to retreat to when life gets busy. 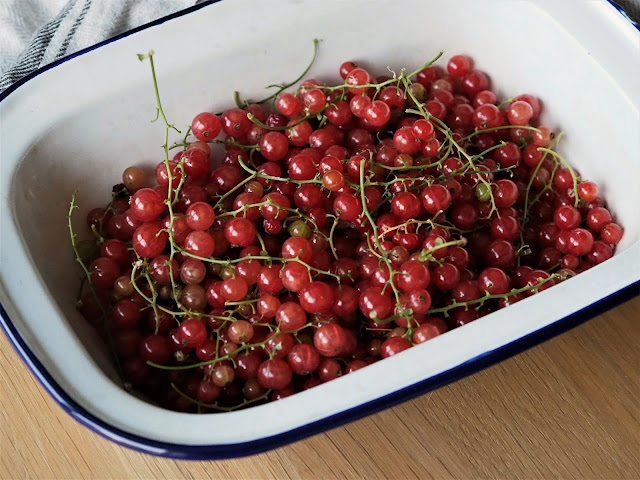 In our garden we have one redcurrant and two blackcurrant bushes. I know nothing about growing fruit but I do realise how totally low maintenance these plants are, to the point where I forget all about them and am surprised when I see their stalks hanging with fruit. The blackcurrants are a joy but I do have a bit of a love-hate relationship with the redcurrants. I always feel that I should appreciate and enjoy them more, do something with them other than pick them and put them in the freezer, because they're not my favourite fruit. It's not the tartness, but the texture and the seeds that get stuck in your teeth. With any other fruit that I had stashed in the freezer, I would quickly use it up by throwing it in with apples into a crumble, but I never want to do that with redcurrants. So this year I decided to really go to town with my soft fruit harvest and enjoy every currant that grew on those bushes. 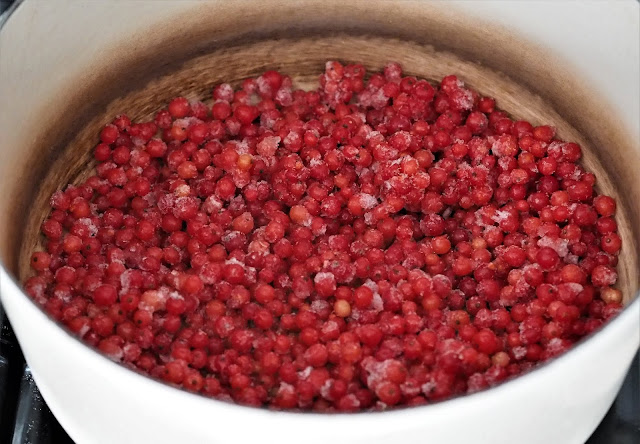 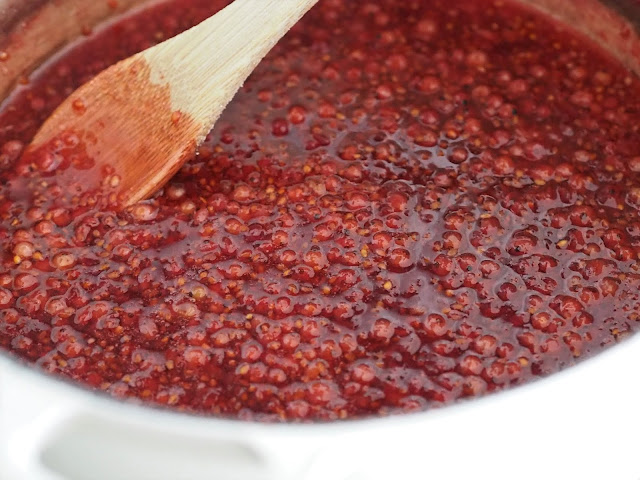 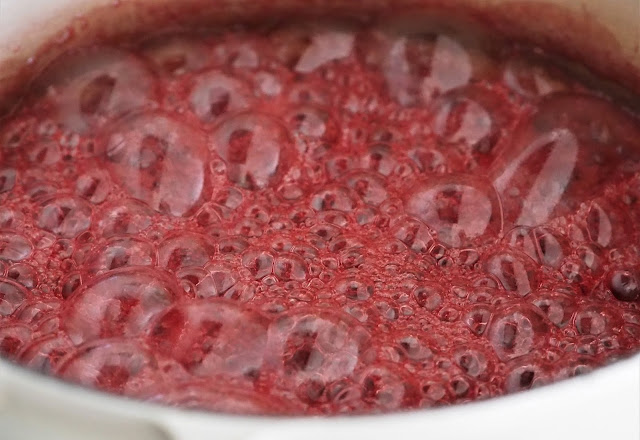 The first thing I did to use up last year's frozen harvest was make a few jars of redcurrant jelly using this recipe, which I would really recommend. And Delia's right, homemade redcurrant jelly is a world away from shop bought jars. Some I turned into a sweet chilli dipping sauce, the rest will get used up later, probably at Christmas. I also made the happy discovery that warmed redcurrant jelly is pretty amazing poured over vanilla ice cream, with the combination of creamy, sweet and tart flavours. 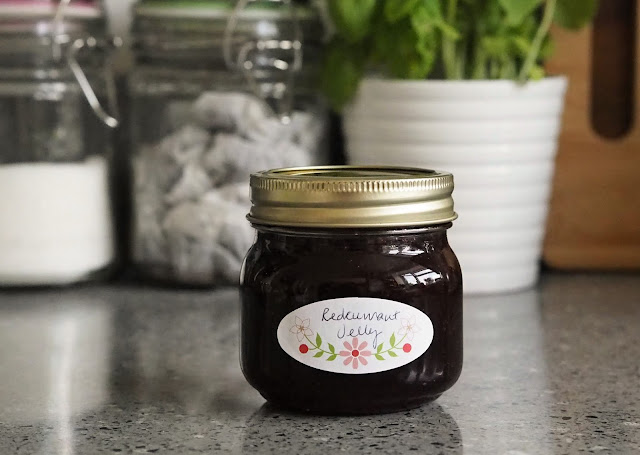 The fresh currants were used in Summer Pudding, a very traditional English seasonal dessert which I'd never made before, probably because I was put off by the redcurrants. You line a bowl with white bread, crust removed, then fill the bowl with stewed redcurrants, strawberries and raspberries, before placing a bread "lid" on top then covering the bowl with a weighted plate and refrigerating overnight. All the juice soaks into the bread so by the time you turn out the dessert and eat, you can slice it and the bread is soft and delicious. 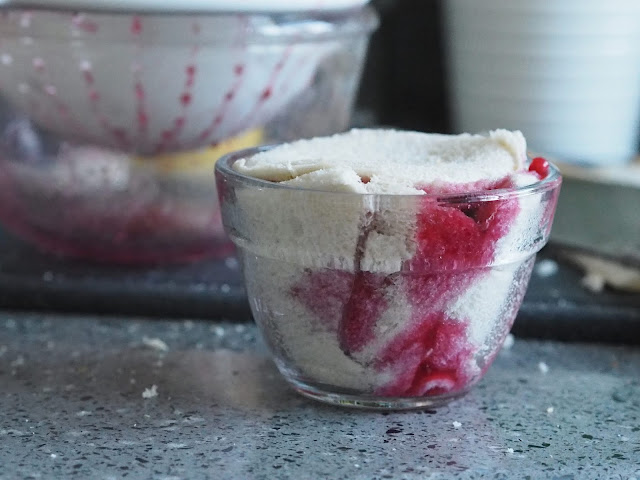 I wasn't sure how much of this we wanted to eat though, so made four individual ones, which were much bigger and more filling than they looked. 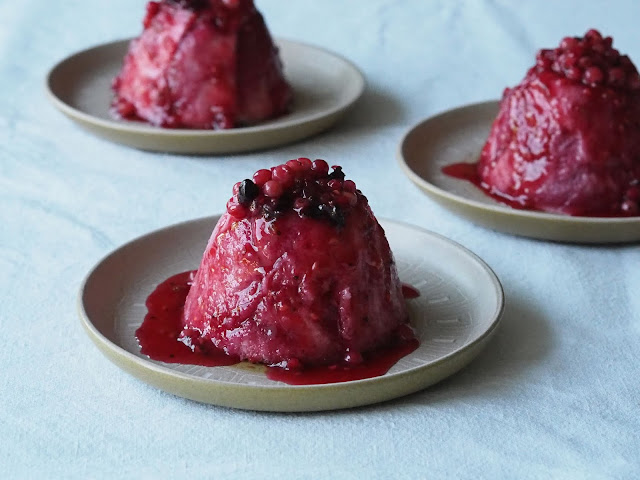 Served with whipped cream they were summer on a plate, although as predicted the children found the redcurrants too "bitty". 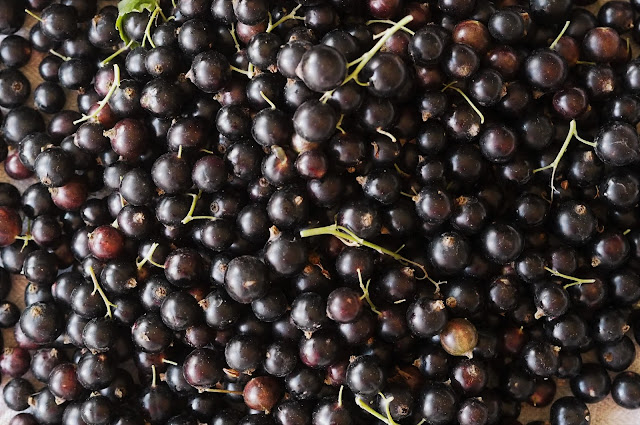 Next, blackcurrants, and what to do with the kilo of fruit I picked from my two bushes. I love these berries (providing they are sweetened!) and could have made everything; gin, crumbles, fools, cordial, jelly, sorbet...the possibilities are endless. Eventually I decided upon jam, compote and ice cream.

I've never made blackcurrant jam before and so I followed a recipe rather than just making it up using half fruit/half sugar as I usually do. This recipe suggested simmering the fruit before adding the sugar to soften the currant skins, which I thought was a good idea, and it worked. I love making jam. I love the way the fruit changes throughout the cooking process, the way the liquid becomes glassy when the sugar is added, then thick and sticky at the end, and I find it one of the most mindful and absorbing types of cooking. 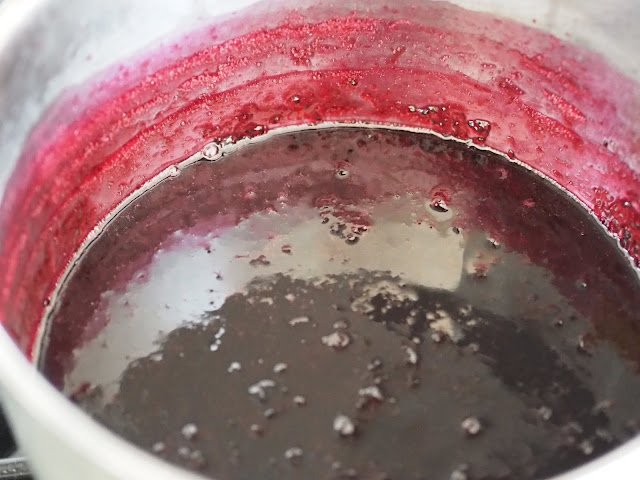 Doubling the recipe gave me three and a half jars of jam, and the half jar went straight into the fridge where I ate some on top of toasted sourdough for breakfast the next day.

Compote (you know I love a fruit compote) is the best way to use up a small amount of fruit, especially the kind which benefits from a little sugar, and I eat it over yogurt, porridge, overnight oats or pancakes. No recipe needed, just throw in a pan over a low heat, add sugar to taste and cook for a while. 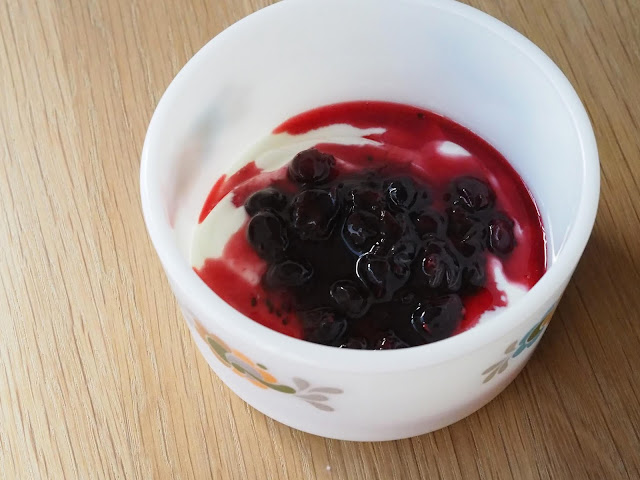 And finally - I saved the best for last here - blackcurrant and liquorice ice cream. I've wanted to make this for a while but never got around to it but now I know how easy it is, I will be making this every summer, forever. 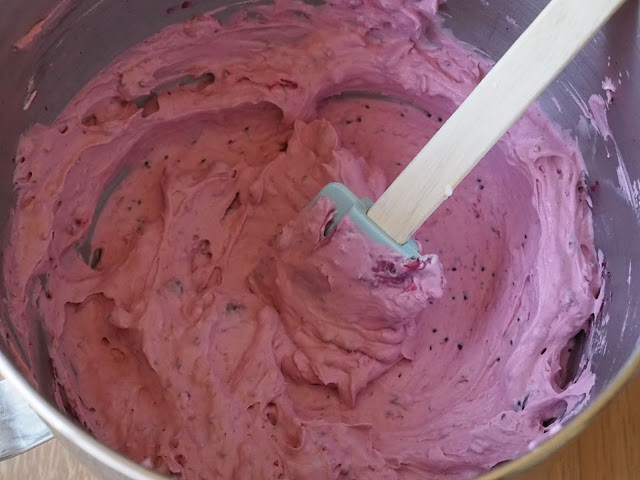 The recipe, from the book Simply Nigella

, is a no-churn ice cream so very easy, it's just a question of mixing ingredients and putting it in the freezer. I can't see the recipe online but this one is very similar, just without the addition of liquorice. 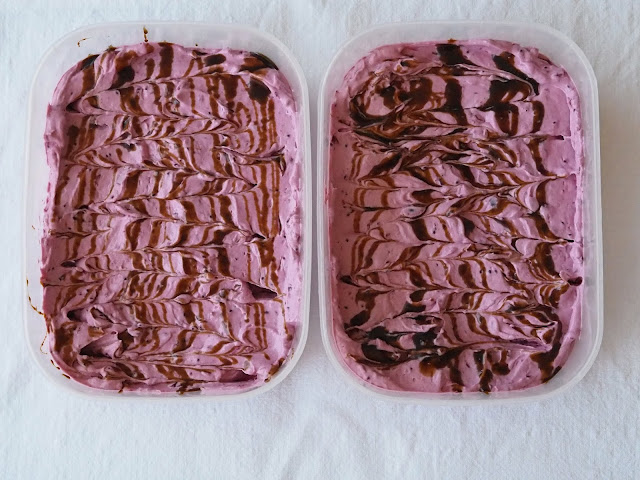 I bought my liquorice syrup from here and found that, for me, the ice cream needed a little more on serving, but I really do love liquorice. 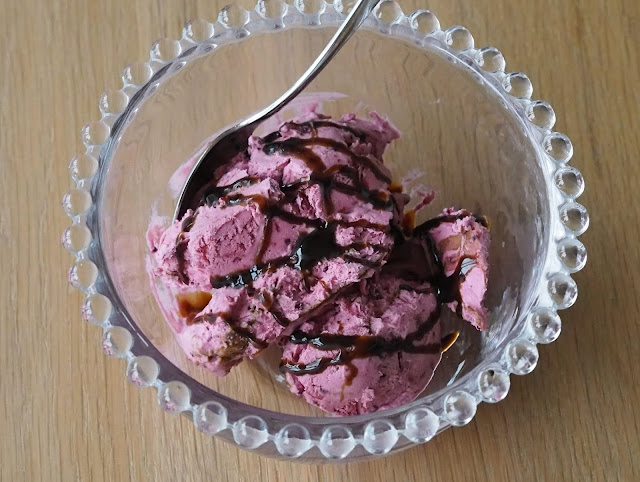 I feel like I've really made the most of the seasonal fruit this year, and now that the soft fruits are coming to an end I'm thinking about the blackberries I'm seeing in the hedgerows (bramble jelly! crumble and custard!) and the apples and pears ripening on the trees. Before we know it it'll be time for pumpkins and squashes and my favourite time of year. Summer is whizzing by and I want to make the most of every delicious moment.


Please do pop over to Lucy's blog and read her July Making the Seasons post which is just full of summery goodness.
Posted by Gillian Roe at Saturday, July 28, 2018

Email ThisBlogThis!Share to TwitterShare to FacebookShare to Pinterest
Labels: Making the Seasons