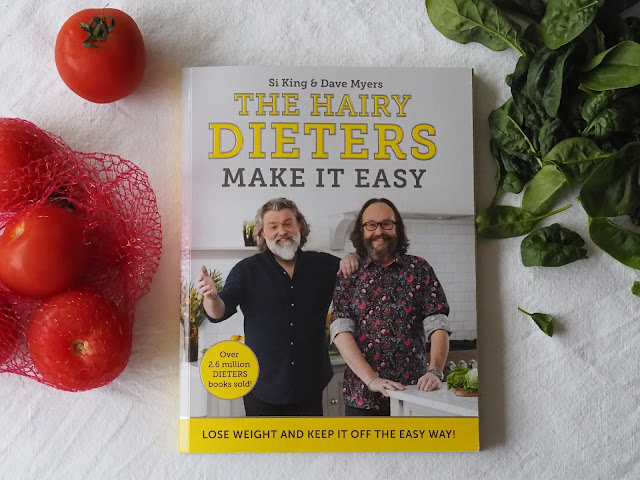 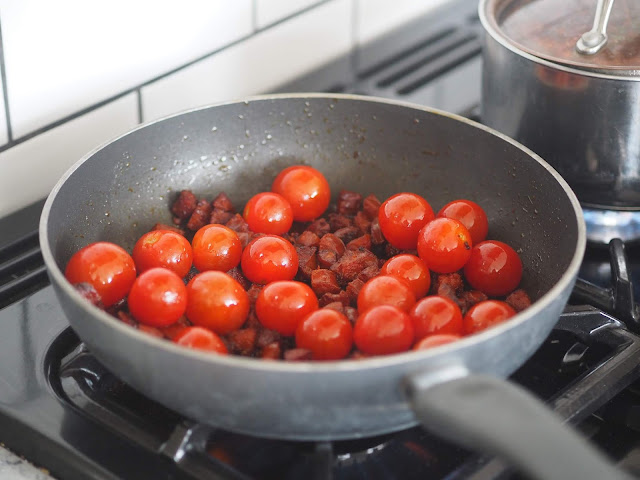 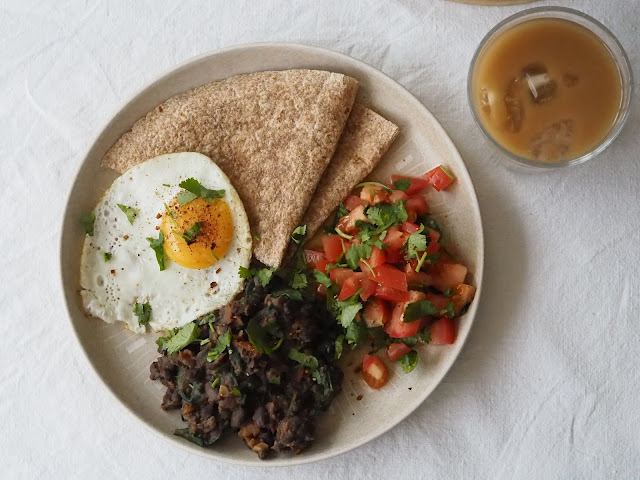 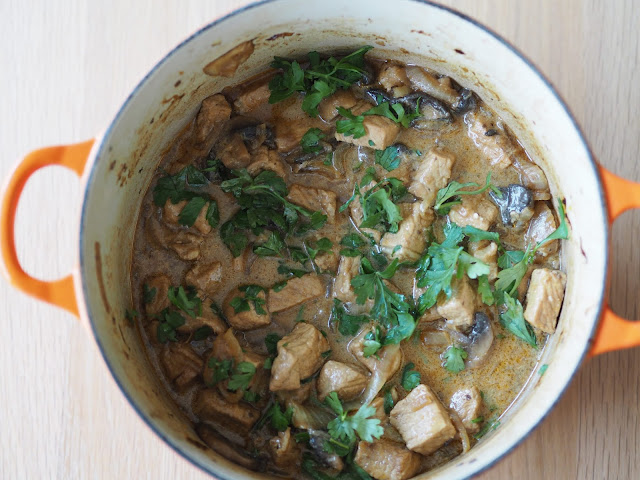 My choice for June's cookery calendar challenge was The Hairy Dieters Make It Easy, the most recent title in the successful Hairy Dieters collection of cookery books. I quite like watching these two on TV although I've never bought any of their books before, but John saw this for £4.99 on Amazon and bought it on a whim. A few Amazon reviewers complained that this was too similar to the previous books, with too many old recipes re-hashed or tweaked and presented as new ones, but being new to these books I have no complaints.

The "diet" part of the book is the calorie counting kind but I ignored that part and just looked at the recipes, which are really good. As soon as this arrived in the post I'd already found ten things I wanted to cook and so it was the obvious choice for June. While neither John or I are on strict diets we are both making an effort to eat less rubbish and more fresh fruit and vegetables, and I always want to cook and eat more lightly in the summer anyway. This isn't what I'd call a coffee table book; there's no beautiful jacket design or velvet ribbon bookmark, but the inside is well designed and simple with crisp photography, clear recipes and instructions in a font that's easy to read, and useful suggestions for alternatives or substitutions. 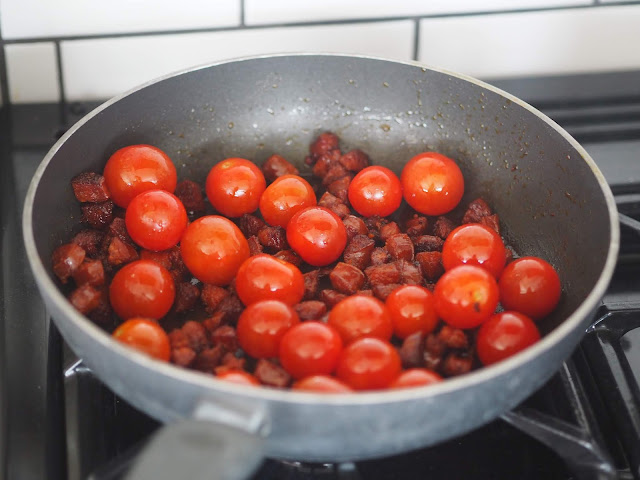 Our first recipe was Roast Cod with Lentils from the "half dozen winners" chapter of recipes with few ingredients. You season the cod and roast it in the oven, then while that's cooking fry diced chorizo in a pan, adding cherry tomatoes and a pack of pre-cooked puy lentils towards the end, stirring it until the lentils are hot and the tomatoes about to burst, before serving with vegetables. The only thing I changed was not using a packet of pre-cooked lentils because I think they're too expensive. We both love puy lentils so I buy them by the box and cook them myself in stock, which did make this recipe take a little longer but still the whole thing only took half an hour from start to finish. 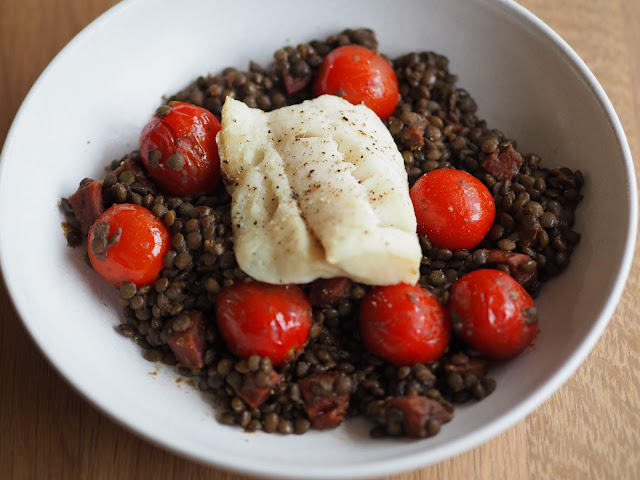 John and I liked it a lot, the kids liked most of it apart from the lentils, and Angus told me off for buying cod. Actually, we ate puy lentils again last night in a salad with feta and beetroot with a basil vinaigrette over the top. So delicious. I told you we like those lentils.

Next up was John's choice and a bold one: Pork Stroganoff from the "15-minute fillers" chapter (those guys love a snappy chapter title!). I say bold because John, much to my extreme disappointment, really dislikes mushrooms so the fact that he'd choose this recipe surprised me. 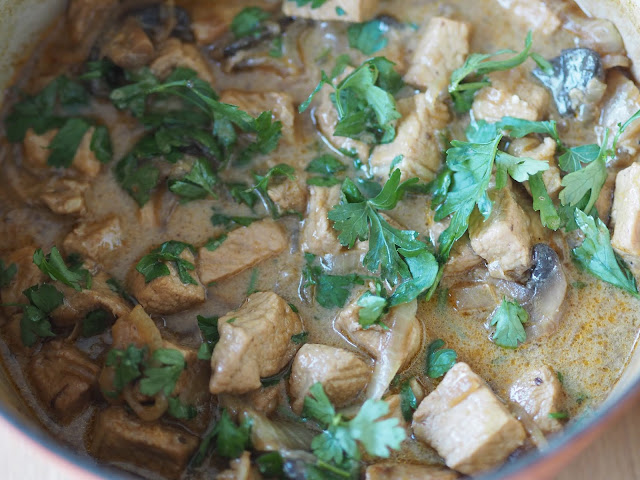 You fry mushrooms and onions, remove them from the pan before frying off the pork, then return the vegetables to the pan to simmer with paprika and a little stock, before stirring through creme fraiche and chopped parsley at the end. The recipe suggests just serving this with "a big pile of greens" (aha, so that's how it's 228 calories a serving!) but I cooked wild rice as well which was a hilarious crash and burn decision with the children. "What are these weird black bits in the rice?" "Are they seeds?" Cue much pushing of food around on the plate and sulking. The stroganoff was ok but not amazing but the wild rice meant that it's not exactly a family favourite. I will persevere.

From the same chapter, I cooked myself "Quick Mexican Eggs" last Sunday morning and ate it as a late breakfast/early lunch on a very hot day with a large iced coffee. John was at work and the kids were having something else so it felt very indulgent and lovely, just cooking this for me.

You cook tinned black beans (drained but not rinsed which adds a wonderful stickiness to them) with garlic, oregano, cumin and tomato puree and leave it to simmer while doing the rest which is an assembly job really; warm a tortilla, fry an egg and make the salsa, which should be avocado dressed with lime juice but I didn't have an avocado so chopped fresh tomatoes and added lime and coriander. 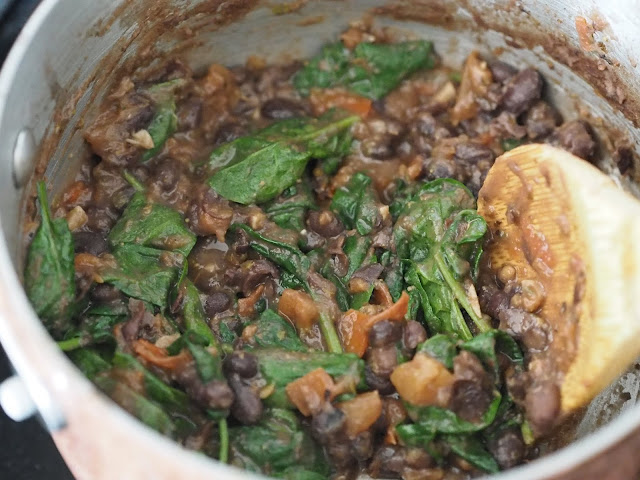 At the last minute, chuck a handful of spinach into the beans and let it wilt down slightly.

I cannot say enough good things about those beans; they were delicious, a perfect combination of spice and seasoning and full of flavour. I absolutely loved this meal. It felt like a substantial plate full of food but also light and healthy too. 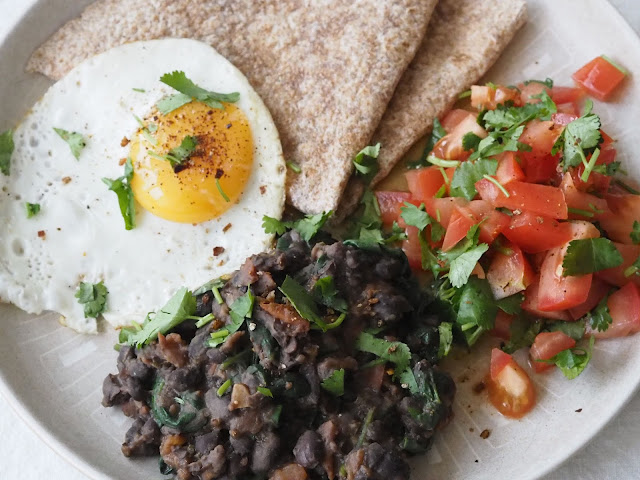 Finally I made Mango Fool from the "easy peasy puds" (I'm rolling my eyes a little here) chapter. Puree half a mango with lime and dice the other half then whip up double cream and greek yogurt before layering up in a dish. 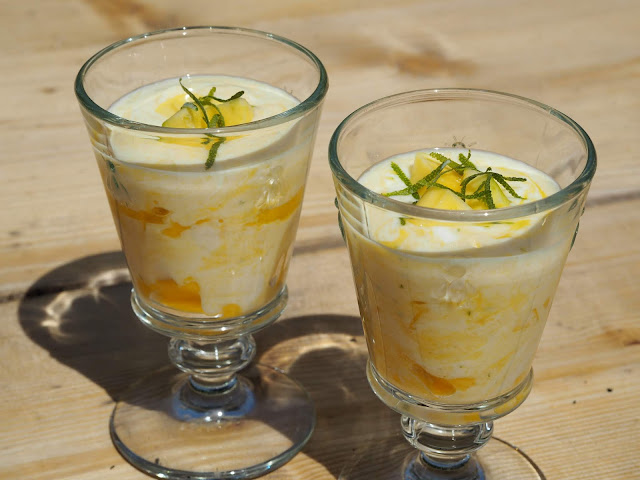 It was good, but would have been better if my mango had been riper, but that's my fault for being impatient. But a nice light dessert which, because it was in a pretty glass, felt more exciting to eat than a yogurt.

There is still so much I want to try in this book. There's a lot of inspiration and some really good recipes in here for the price, I just need to avoid wild rice for a while.

Thank you for your nice comments about the Mollie Makes feature. After a long break from that magazine I've recently started buying it occasionally, and have just had the most wonderful time making one of their projects: a miniature craft room in a suitcase. It captivated me in a way that no project has for a really long time, and I cannot wait to show you all in a blog post soon, a really long one with lots of photos.