Working on the Garden 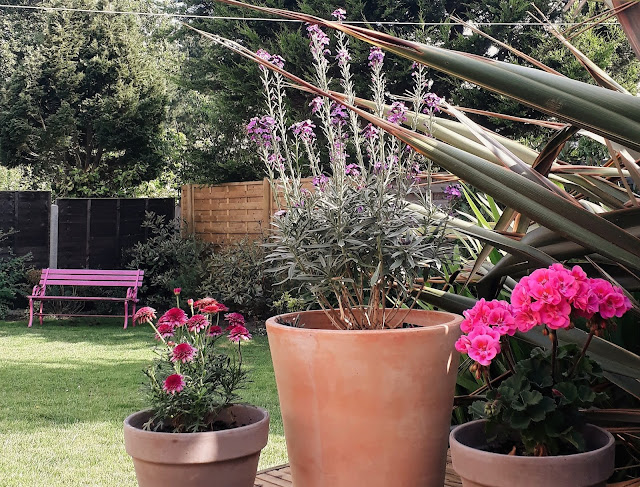 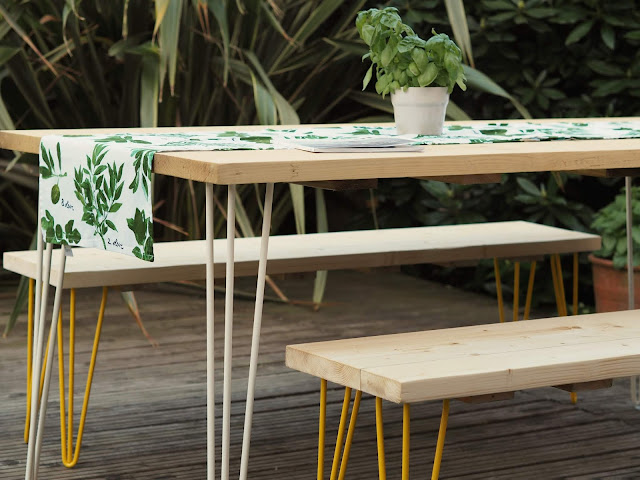 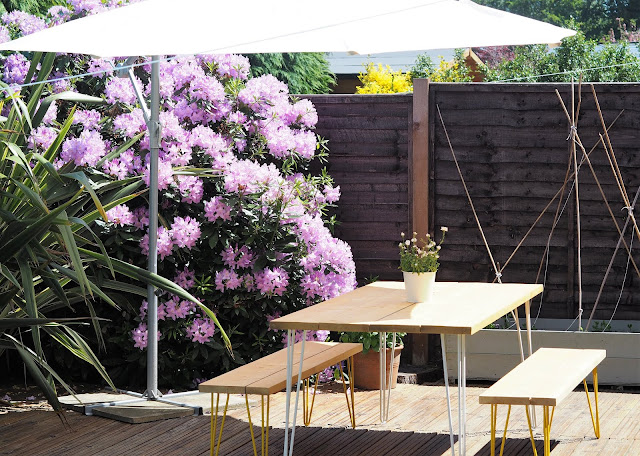 I've mentioned a few times lately how hard we've been working on the garden over this spring and early summer, and I thought it was time I finally got around to writing a post and showing you some of what we've been up to. You have to bear in mind that our budget is small and our free time is very limited. There isn't much money for new plants, never mind the kind of serious landscaping I would like to do and, given that we have two active children and a very active dog, we are never going to have a perfect lawn.

The first thing I wanted to do was rescue this sad corner of the garden, which is the most visible from the kitchen window (somewhere I spend a lot of time), and try to turn it into somewhere lovely to look out on. 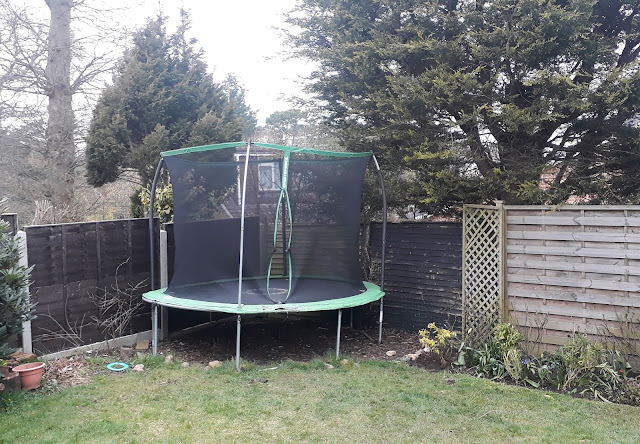 The trampoline is much used but very ugly, and I knew that we could move it to the opposite corner of the garden where is it screened by some large cordyline plants and palms. At nine and eleven, the children are no longer at an age where I need to be able see them in the garden, and so I was all for hiding the trampoline. 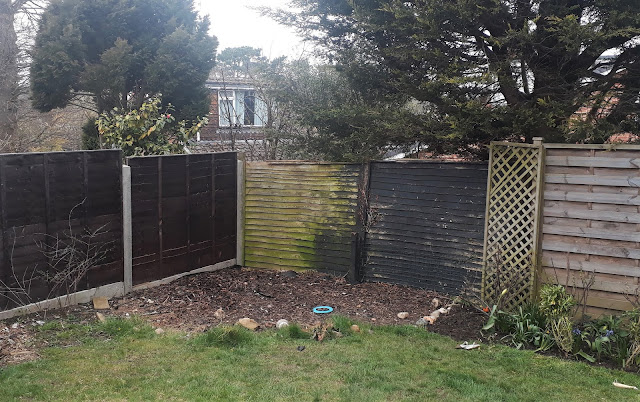 The other issue was the two rotten fence panels behind the trampoline which badly needed replacing, so that was the first job. 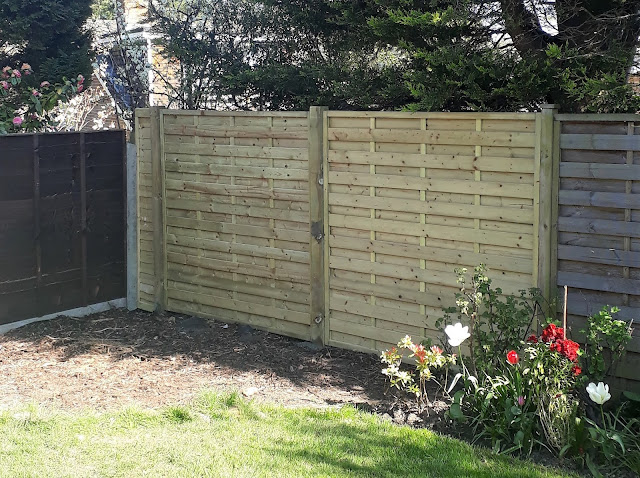 Although they don't perfectly match the colour of the existing ones, they are a huge improvement and will blend in over time as they weather. Next, my mum and I cleared away all the wood chip under the trampoline and dug out more flowerbeds, extending the border which runs along the bottom of the garden into the corner. 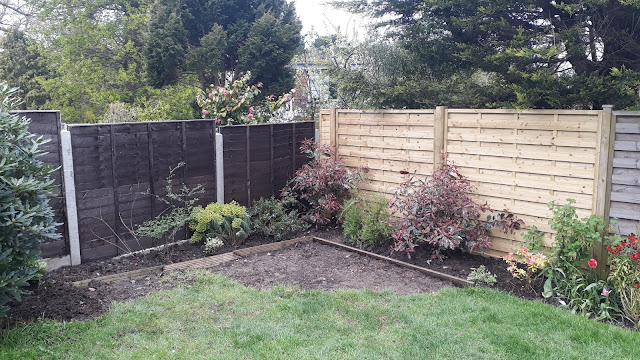 We were able to take some large shrubs  - two pink toned Red Robin bushes and a euphorbia - from my Grandpa's garden before his house was put on the market, and the others were moved from other parts of the garden. Large plants are so expensive, and I wanted to plant as much greenery as cheaply as possible.

Finally, John laid turf over the remaining patch of bare earth. This has all been happening slowly as you can tell from the plant growth; the fence was replaced at the start of April, the border created at the end of that month, and the turf was laid at the start of May. 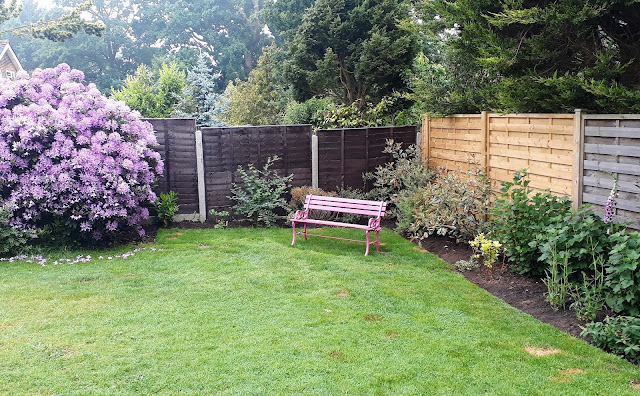 I took these photos at the end of May during half term, when the rain had made the grass greener and the beautiful rhododendron bushes were in bloom. As you can see, I have a hard time keeping that straight border straight and I might make it more deliberately curved over time. There is no scheme or idea behind the planting here, I just want to look out on as much green and as little brown as possible, so I'm hoping that the shrubs will grow to cover the earth and fence. I did buy a few Verbena Bonariensis plants as I think they add fantastic height and colour, and the flowers last for a long time. 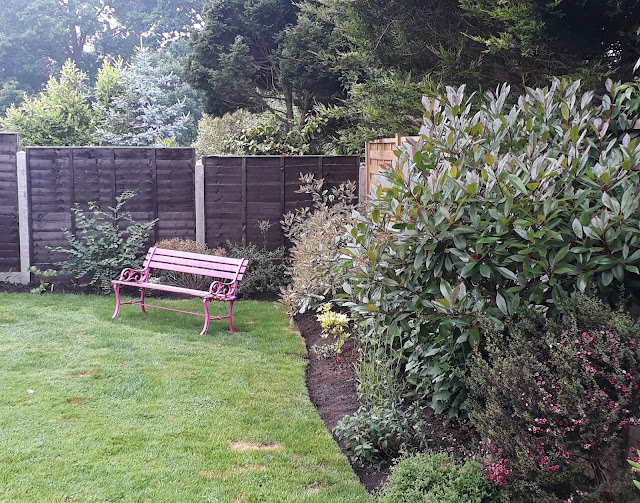 The other job we really wanted to tackle was the decked area directly outside the patio doors from our kitchen-diner. We use this space so much, when the weather is warm it really is like having another room. But it was in really bad shape; the decking was unfinished, wobbly in places, covered in mildew and slippery; the parasol cover had torn in high winds; the table and three chairs were so rickety that the chair arms actually fell off when you sat on them; and no-one ever sat on the pink bench as you get spiked by the cordyline and it's also really uncomfortable. 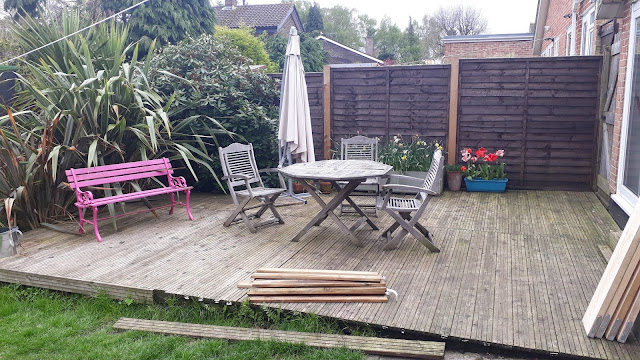 We began by jet washing and staining the decking with some wood stain that would protect the wood and make it less slippery. 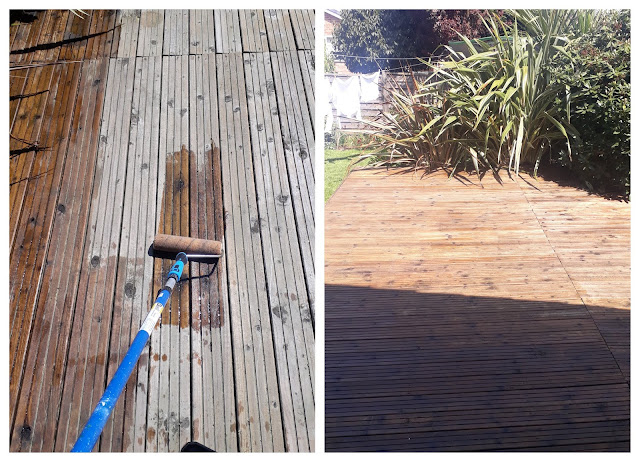 We also finished off the edges of the decking, something we'd been meaning to do since we moved in three years ago. 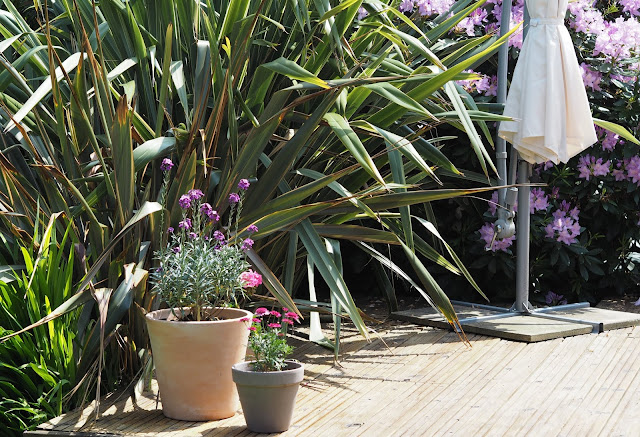 We were able to order a replacement shade for our parasol which I was really pleased about. I love that cantilevered parasol because it provides so much shade and also gives a nice enclosed feeling to the decked area, making it feel even more like a room outside. 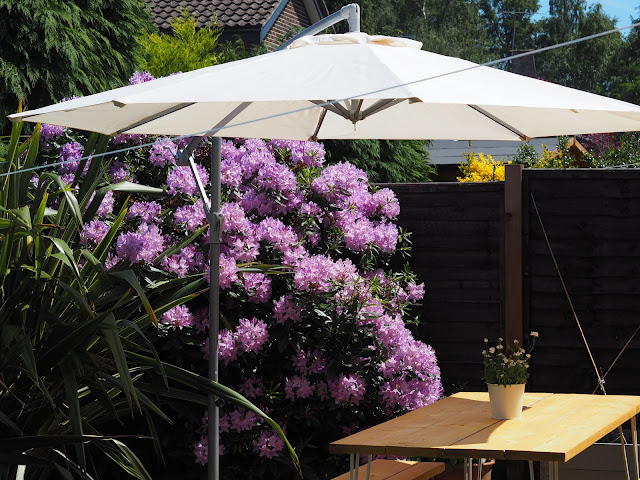 We also built a new table and benches. Now, good quality outdoor furniture is really expensive and we just didn't have the budget to go out and buy new everything. But this time last year I saw this amazing table and, the more I thought about it, the more it seemed like this would be an affordable solution. Plus, John was really up for making it. We didn't feel to bad about getting rid of the old garden furniture - it was given to us by some friends when they moved to Australia and was only ever meant to be temporary - so it will become firewood. 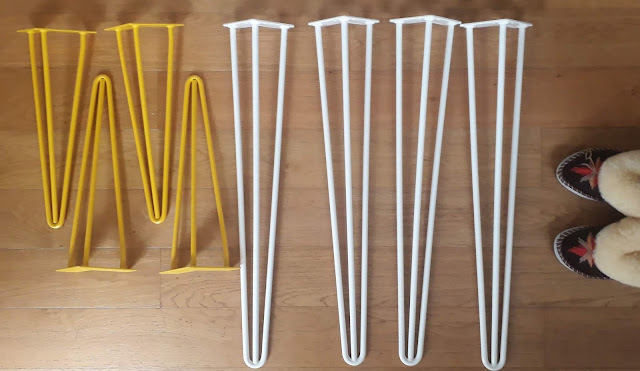 John cut the planks and glued them together, then fixed them on the underside of the table and benches with batons and screws. Then he sanded the top. 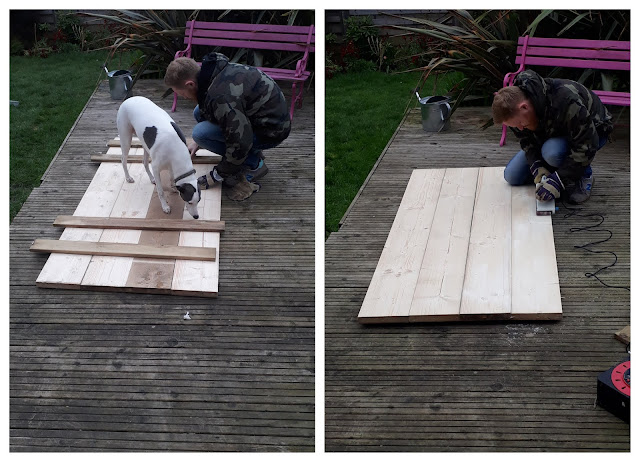 Next the legs were screwed on, then it was all sanded again and given three coats of wood oil to protect it from the elements a little, although I want it to look quite weathered and beaten up over time. 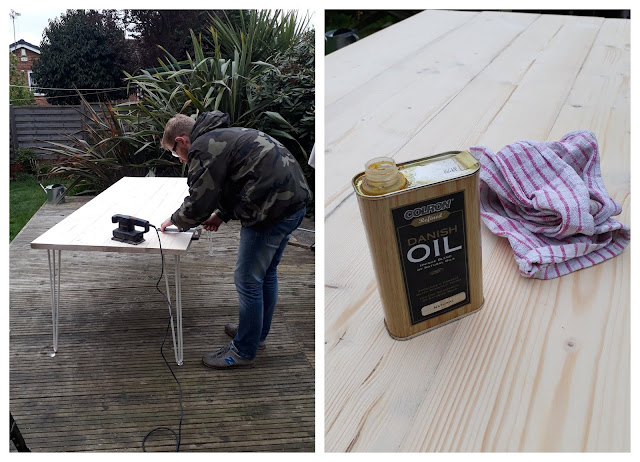 The finished result is so lovely. It is such a sturdy, solid table but the hairpin legs make it look lighter than it is, and the benches are brilliant for seating lots of people. 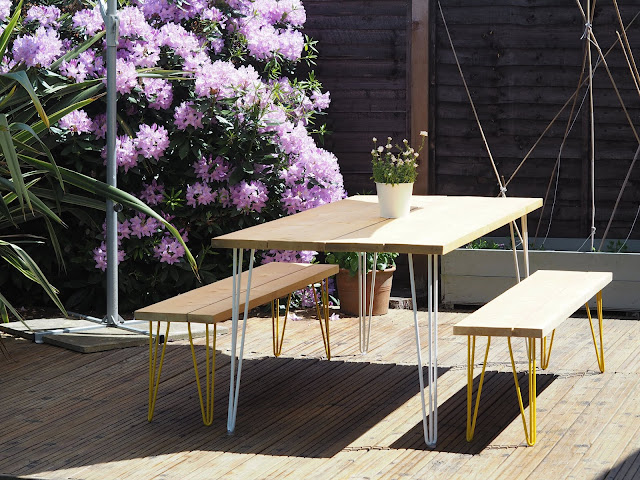 We eat outside so much more frequently now that we have somewhere roomy to sit and don't always have to carry outside a fourth chair, or wobble bottles precariously on the old sloping table top. It has genuinely made a difference to how we use the garden. 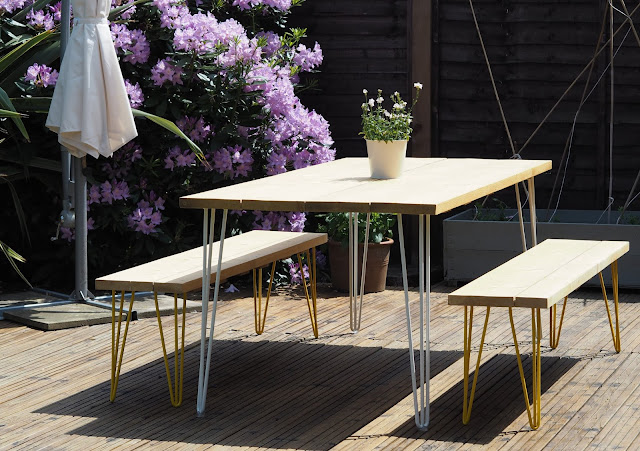 Now, you know I love a before and after photo. Even in the rain, even with a grainy photo taken on my phone, you can see the difference. 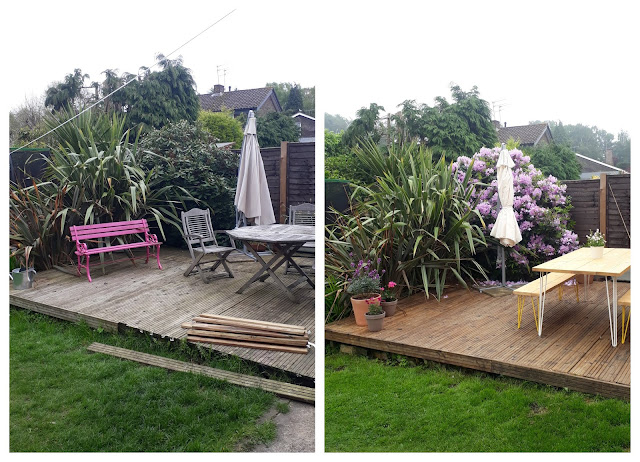 It's still evolving though, as the sweet peas I planted in the large grey planted start to grow up the canes. I'm so happy with what we've done and I really hope you enjoyed seeing it come together here.