Making the Seasons: May 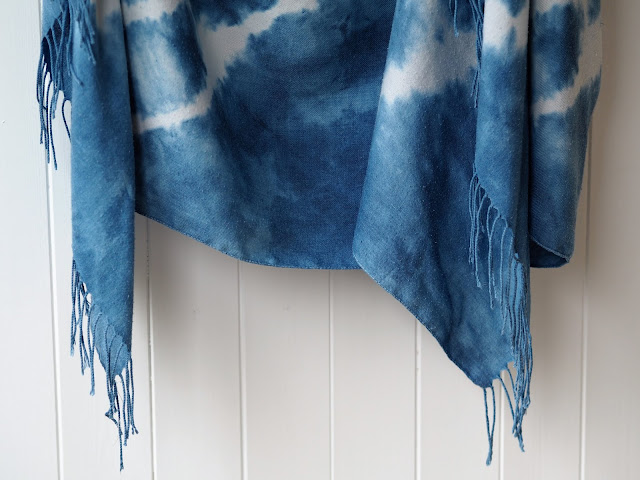 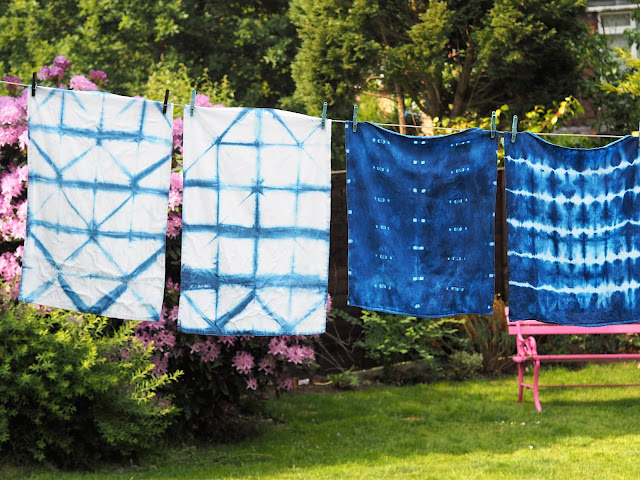 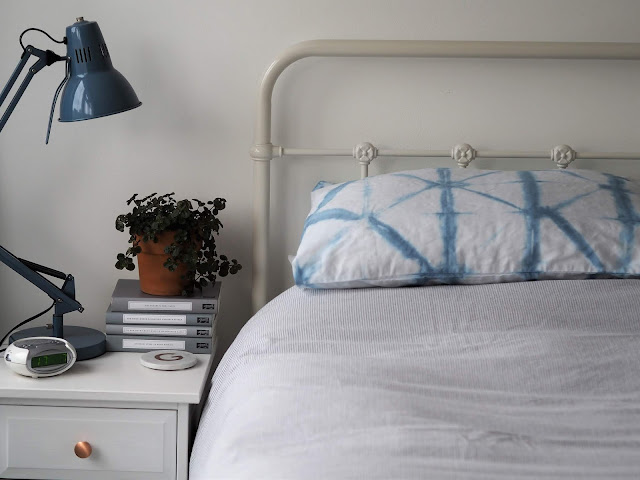 Welcome to May's Making the Seasons post, a monthly project between myself and my friend Lucy. I know that, throughout this series, I have been championing the delights of the small and seasonal project, something achievable and easy to do around the demands of everyday life, but not this month. This time, I found myself with a new book and a half term break coming up, and so I deliberately set aside some hours to myself to experiment with dyeing with indigo. I know that there is nothing particularly spring-like about dyeing fabric, but it is something best done outside and so the beautifully sunny and warm weather we had over the bank holiday weekend was perfect.

I have never dyed anything before. The tie-dye craze passed me by, and while I've seen lots of crafters dye with natural materials, or dye their own yarn, it never really appealed quite enough for me to want to learn a whole new skill. But then, on a whim really, I bought this book

, and I think I am hooked. I'd really recommend it as an introduction to Shibori dyeing as the stages are set out very clearly, and the sewing projects inside are an inspiring way to see how Shibori patterns could be used on various garments or household items.

I didn't use the sewing projects though in the book though. Having already bought the book and then spent £25 on an indigo dye kit, and wanting to keep things as simple as possible, I decided to dye things I already had in the house rather than buying metres of cotton and linen, tempting though that was. I rummaged around for some unused plain white tea towels I knew I had somewhere and an old cream pashmina/scarf. I also bought a plain white linen table runner and some new cotton pillowcases and took it from there. (Indigo does not adhere to synthetic fibres so I had to make sure everything I used was a natural material.) 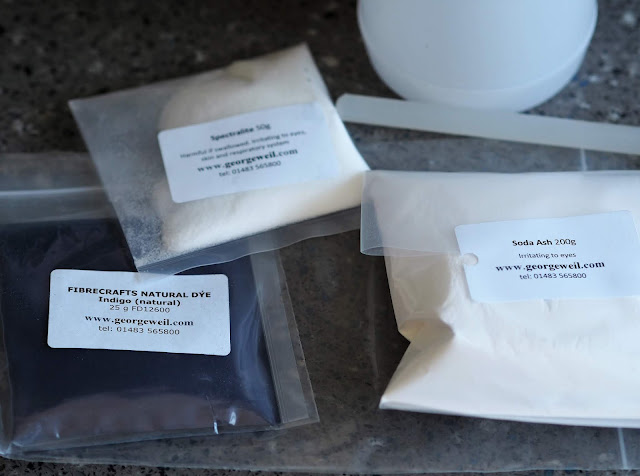 Making up the indigo dye is like following a recipe really; various things have to be weighed, combined and mixed to a paste, then something else is weighed and added before it's left somewhere warm for a little while. Then you get your water ready and add the dye concentrate to the water, then leave it again. I am not going to do a step by step tutorial here as I don't feel nearly expert enough, but there are loads online if you want to find out more. 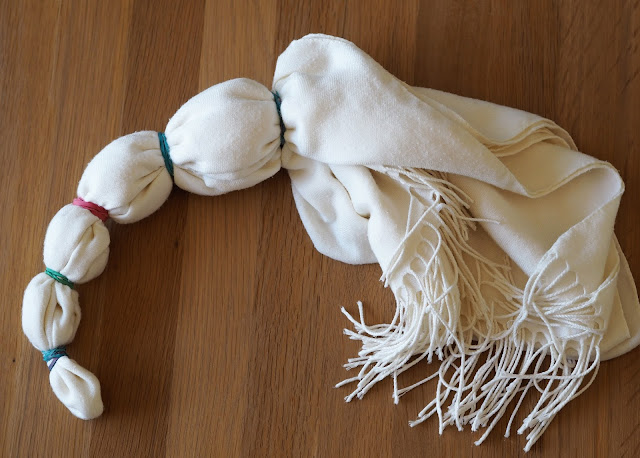 Earlier that day, I had prepared my fabric. First I tried Shibori Kanoko, which is very similar to the Western tie-dye style. Sections of cloth are bound with string (or elastic bands - so easy to snip off afterwards!) in different ways. You can create a lovely sunburst pattern by folding the fabric into a square and then tying sections from a central point going outwards towards the edge, as I did for the scarf above. Or wavy stripes can be made if you concertina the fabric and place the bands or string at regular intervals along the length as I did in the tea towel at the top of the picture below. 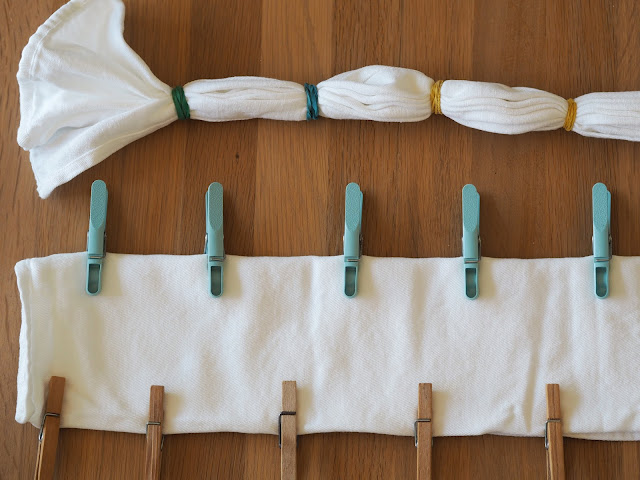 Next was Shibori Itajime, which uses wood to create pattern, like these pegs in the tea towel above. The two pillowcases, below, I folded into triangles then sandwiched between two pieces of wood, tying the elastic bands as tight as I could. 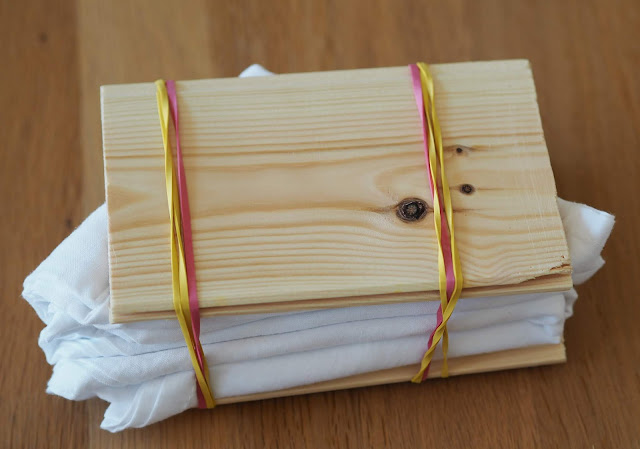 Finally I tried Shibori Kumo, which I think is my favourite. Found objects, most often pebbles, are placed and secured creating lots of rings of different shapes and sizes, and this is what I used for my table runner. 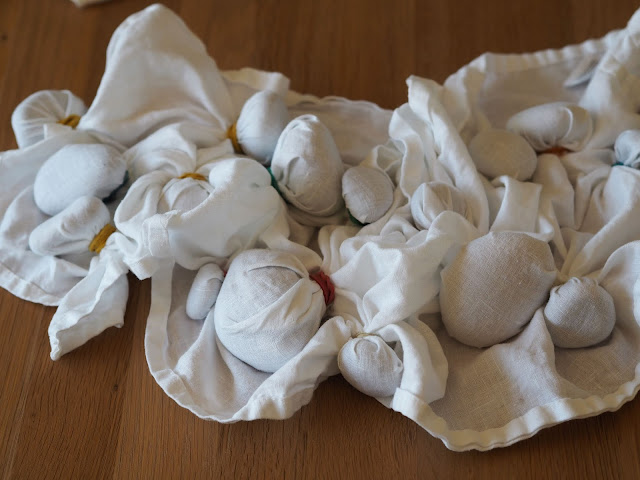 The folded fabric needs to soak in water for a couple of hours before you can dye it. 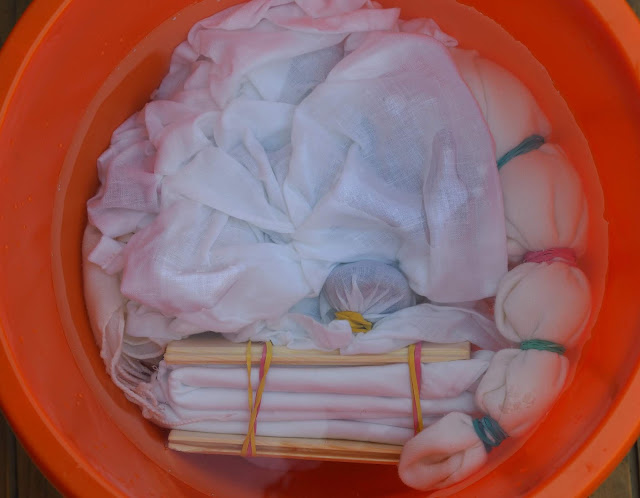 The actual dyeing process happened much more quickly than I thought it would. It seemed to take less than a minute for the colour the take and deepen really quickly. I am curious to see what would happen if I left fabric for much longer, or even just for ten seconds, but for all that I dyed, it was no more than thirty seconds to a minute. While the fabric is in there, try to wiggle it around a bit to get as much dye into every section as possible, but don't splash it around as indigo does not like too much oxygen in the water apparently. No idea why, but it said so in the book and everything else I read online. 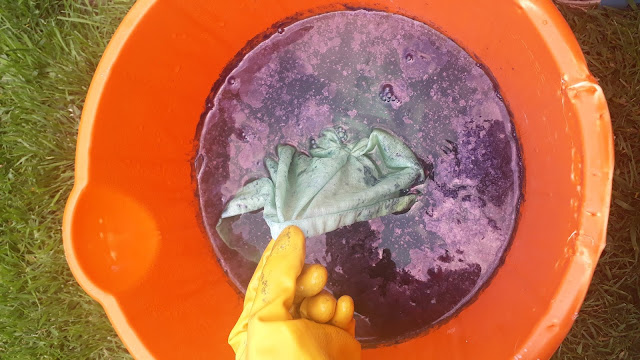 As soon as you remove the fabric from the dye vat, have a bucket of water ready. I removed my bindings at this stage, although you can also do it later if you like, but I just thought it would be easier to rinse. I had a few buckets and the hose lined up next to me in the garden to I could rinse and change the water quickly. When most of the colour seems to have gone, you do a final rinse with fresh water and some vinegar, then hang it on the line to dry. 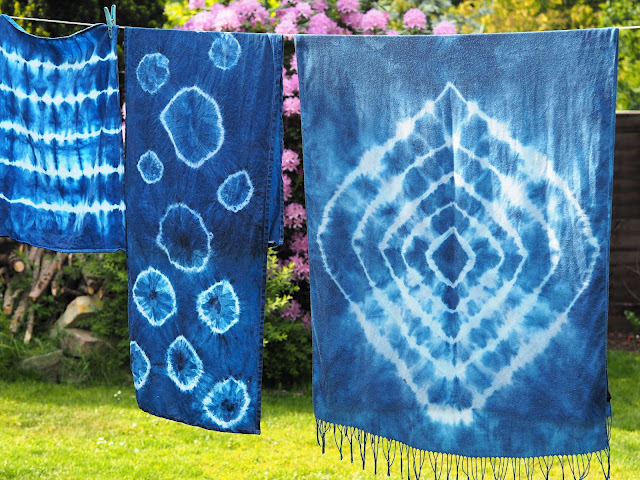 After they'd dripped on the line a bit, I put them in the washing machine on a normal wash with some detergent, and dried them. This instantly faded the colour a little from the deep purplish blue to a softer, more denim blue which I much prefer. 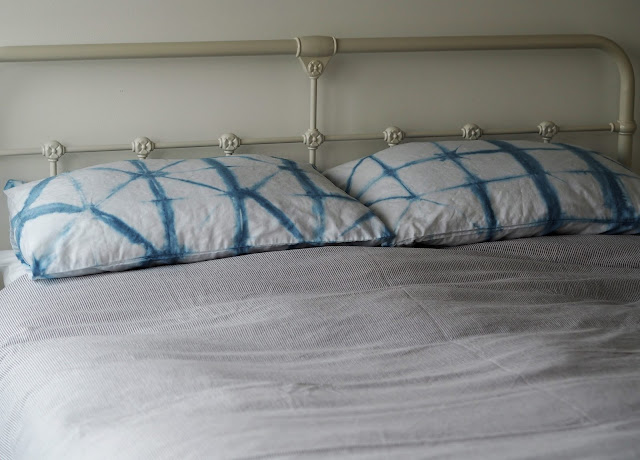 Shall we look at the results? Oh, go on then. So the Itajime technique, where the fabric is folded between wood, created the most beautiful triangular pattern with a small amount of blue over a large white area. I really like this, it's ideal for these pillowcases as it's not too much. 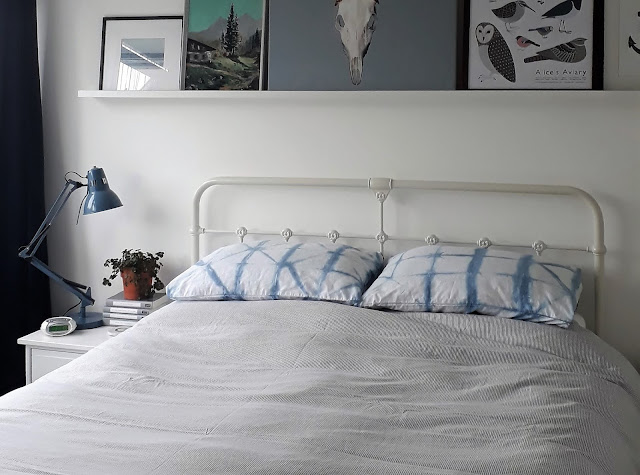 The pegs create small, uniform white rectangles on a predominantly blue background as you see in the tea towel on the left. 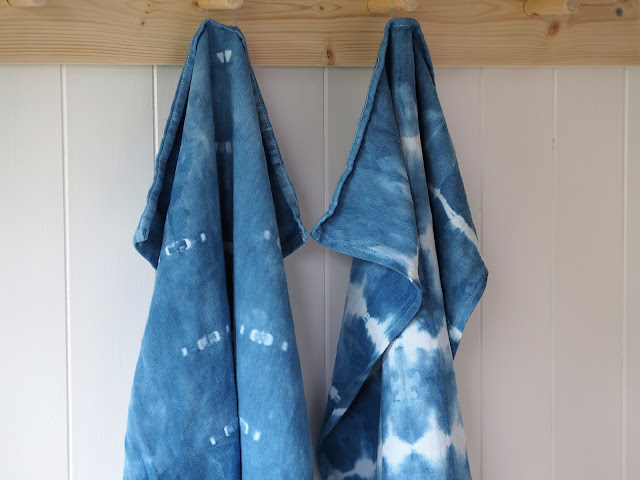 While the one of the right has the wiggly stripes from the concertinaing and tying of the Kanoke technique. 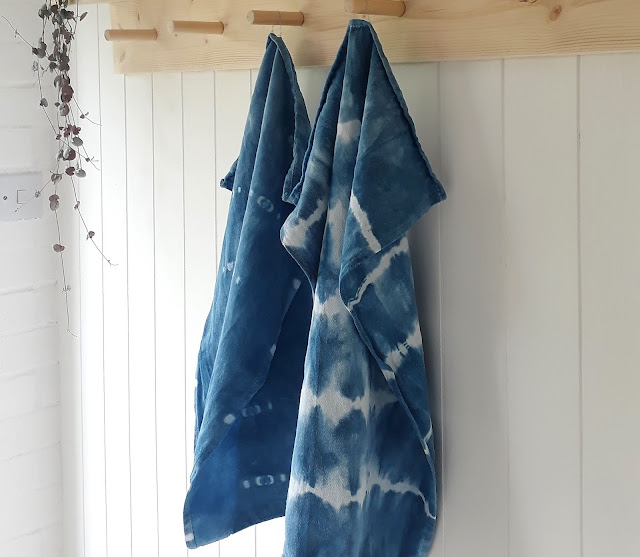 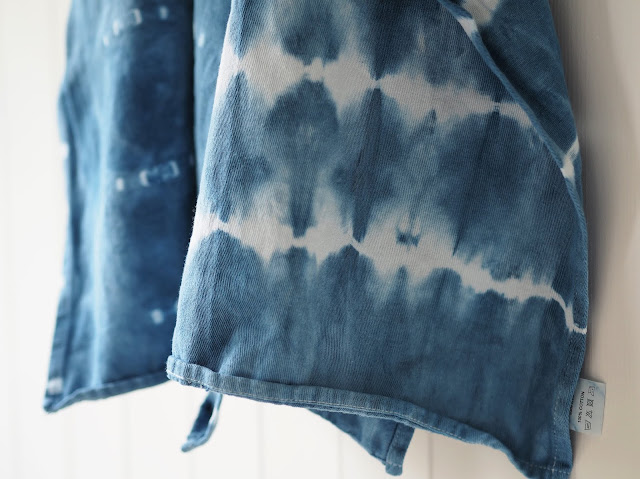 With my scarf, I folded it in half before then folding into two squares which created a beautiful double sunburst pattern which is stunning. 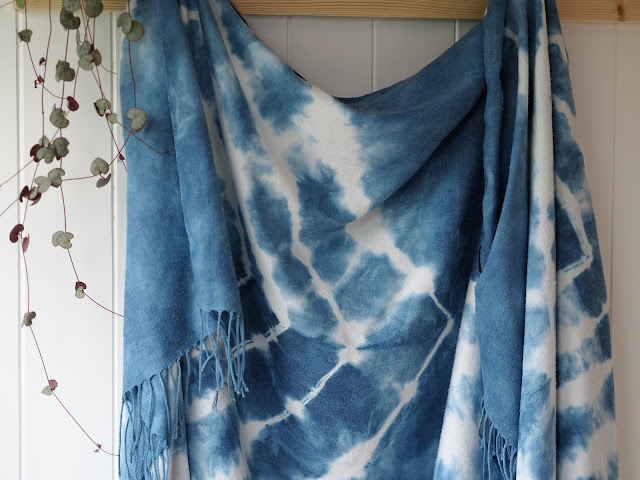 This scarf was sat in the attic until last weekend, not worn for two or three years, and since dyeing it I've worn it every cloudy day this week. I feel like I have a whole new item of clothing! 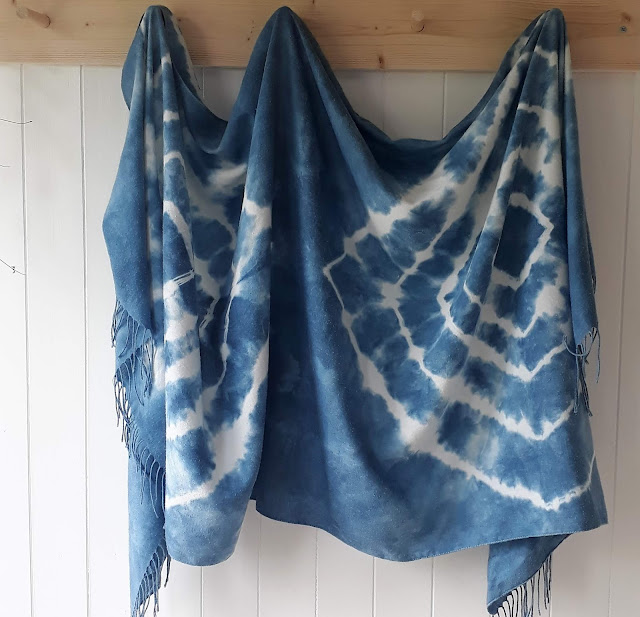 And finally the table runner with the Kumo, or pebble, technique. Those irregular circles create a beautiful effect and it looks lovely on our outdoor table. (John made it a few weeks ago - I still haven't had time to put together a proper garden post but I will soon, I promise.) 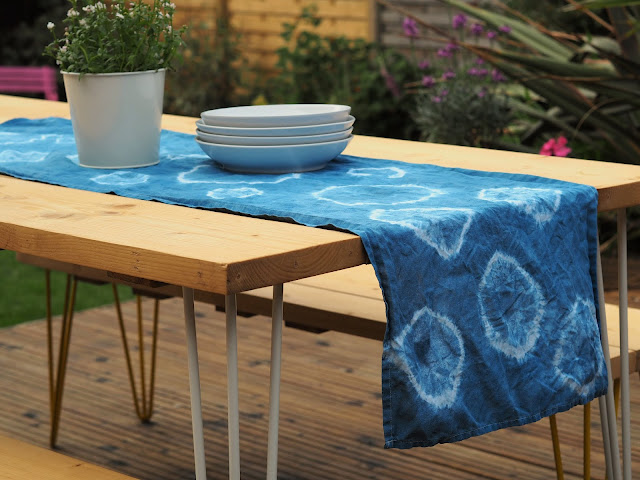 There end my adventures with indigo dye. I absolutely loved it, and really want to do it again. I am very tempted to try a white duvet cover, and a t-shirt, and maybe some fabric so I can make things like cushion covers. John is threatening to stage an intervention if it all gets too out of hand. But the moment when you take the item out of the vat, undo the ties and see that it worked is so exhilarating, I can see how it would become addictive. I was giddy with excitement and dragged everyone out to the garden to see what I'd made.

I hope you've enjoyed reading about my dyeing fun. Please pop over to Lucy's blog, Attic24, to see what seasonal and creative wonders she has been creating in this beautiful month in her post.