A Driftwood and Eucalyptus Advent Calendar 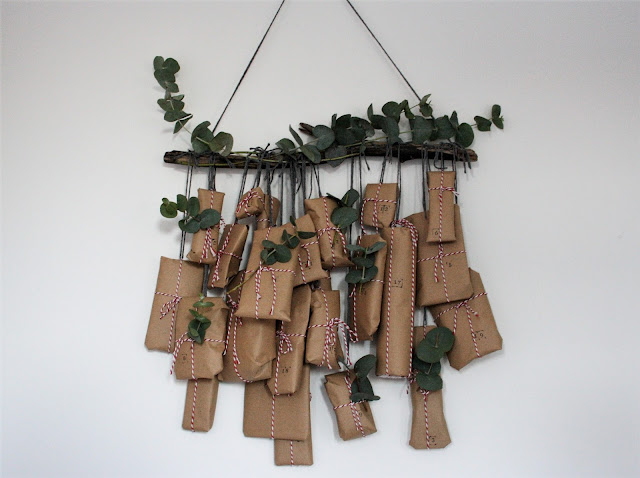 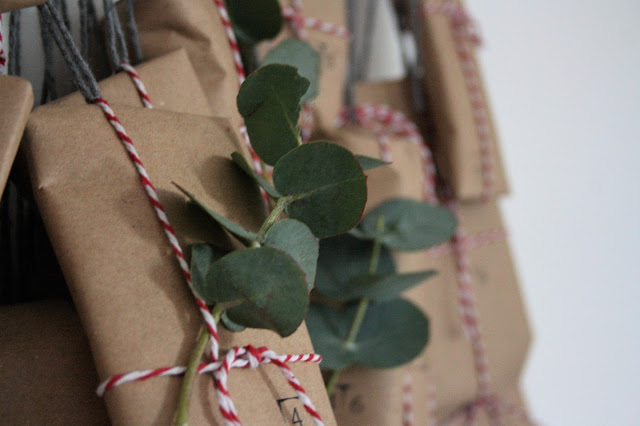 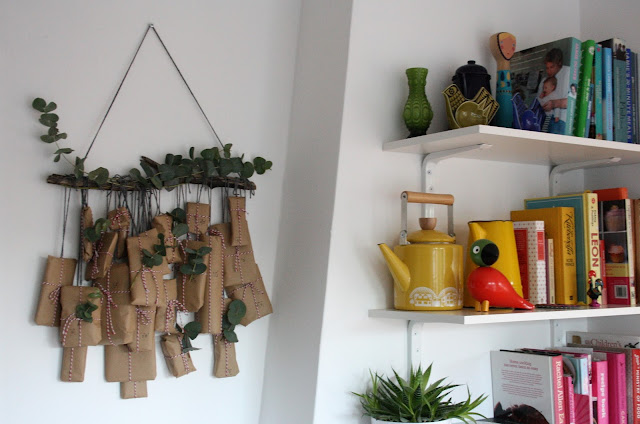 Last Sunday, I was up in the loft going through the Christmas things looking for the advent boxes I made last year. I had intended to get them out again, but when I found them all I just wasn't feeling it. Some of them were in quite a bit of disrepair, while others were empty since the contents had been eaten or played with. The thought of sorting them out five days before the start of Advent made me feel a little faint, frankly. They were a wonderful thing to make but they took a really long time.

So I decided to do something different this year, something quick and simple. I usually hang my advent garland down the banister and add chocolates and treats for the children, but I'm aware that that will be very tempting and chewable for Ziggy this year, so I'm not going to risk the garland being chewed to death, or Ziggy eating chocolate. Both would be disastrous. 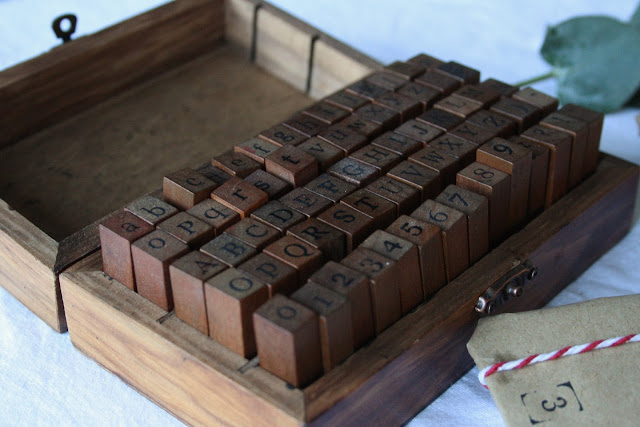 I wanted something I could hang on the wall: puppy proof but accessible and fun for Bella and Angus. Based on a few ideas I'd seen on Pinterest, I decided to hang 24 small parcels from a driftwood stick decorated with eucalyptus. Simple and plain, nothing complicated. Choosing the contents was fun. I aimed for two thirds food, one third gifts, and sticking to a tight budget so shops like Poundland, Home Bargains and supermarkets were where I did my shopping. For non-food based gifts I chose things that both children could enjoy, as each little parcel contains two gifts, like stickers, erasers, key rings, Christmas socks and lip balm. 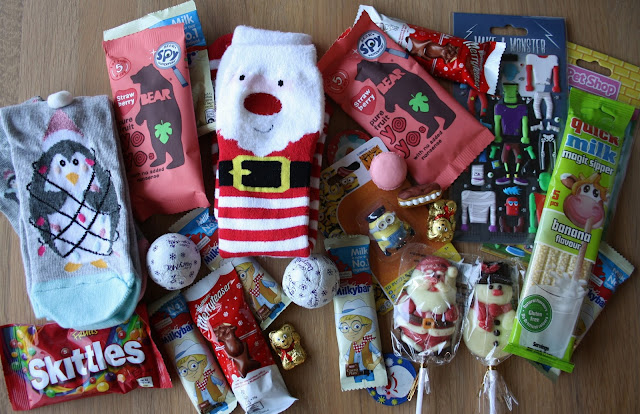 For the food, there are of course chocolate and sweets in those little parcels, but I added things like those individual flavoured hot chocolate sachets, and those funny little milkshake straws that you put in plain milk - in short, the kind of things the children wish I would buy in the supermarket but that I always say no to. 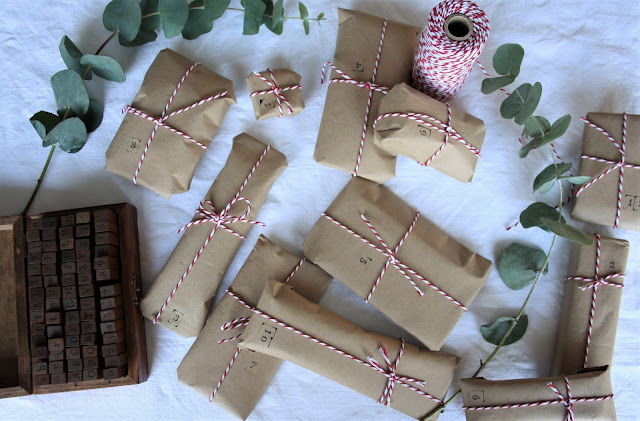 Wrapping was fairly quick, a couple of minutes per parcel. I don't think I will ever tire of the brown paper and string look for gifts. It's cheap, can be recycled unlike most foil based Christmas wrapping paper, and is suitable for any occasion. Plus it's just really pretty. And that ball of red and white baker's twine is about to go into it's third Christmas. I remember it was a huge ball when I bought it for something like £8 or £10 but when you think that you can pay a couple of quid in the supermarket for a metre or two of ribbon I think it's pretty good value to buy it this way. 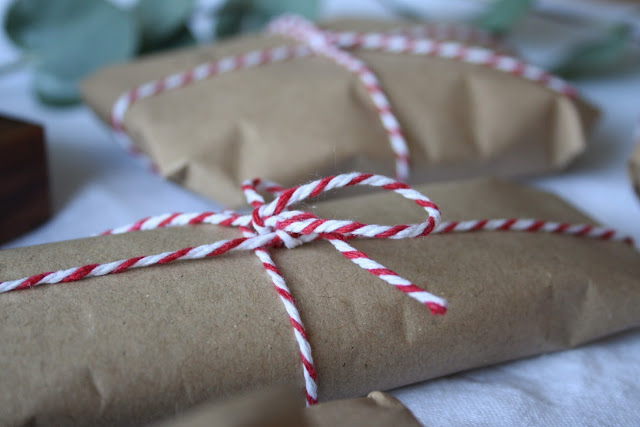 The fiddliest job by half was hanging them all onto the wooden stick. It's also quite heavy, what with 48 small things dangling from a piece of wood, and I wasn't sure that a little picture hook would take the weight. Bless John, who drilled a hole into the wall for me last night, with a proper wall plug and screw, just so I could hang the calendar in the dining room. He rolled his eyes and huffed a little (another one of Gill's crafty ideas....) but I'm sure he loves me really... 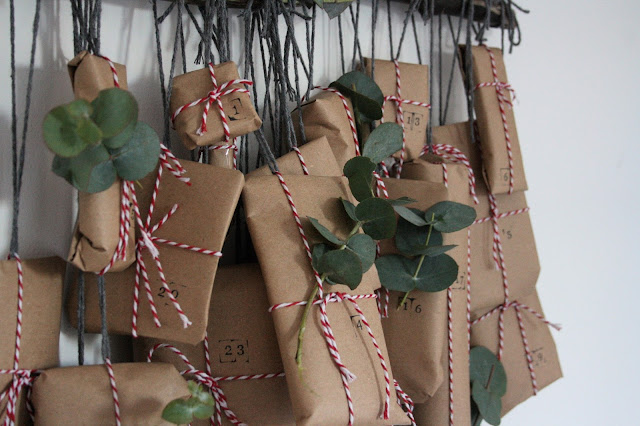 I really like it's position in the dining room, in a funny shaped wall space next to the asymmetrical chimney breast and shelves. 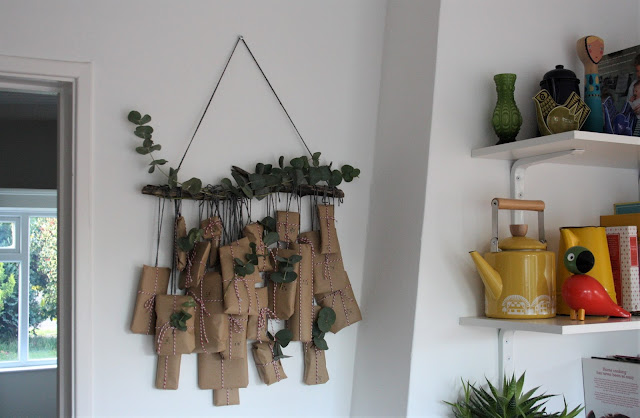 I hope the children like it. My two are almost eleven and eight but, with Bella off to secondary school next September, I realise that I may not have that many more years of wrapping small toys and chocolate snowmen (parents of teenagers - what on earth do you put in their stockings?!) at Christmas. This may be the last year she puts things like Sylvanian Families on her Christmas list. She's the only one in her class not to have a mobile phone. What I'm saying is I want to make the most of these sorts of traditions for the children before they lose interest. What I'll do then is make an advent calendar for John and I - twenty four little bottles of gin perhaps?
Posted by Gillian Roe at Wednesday, November 29, 2017