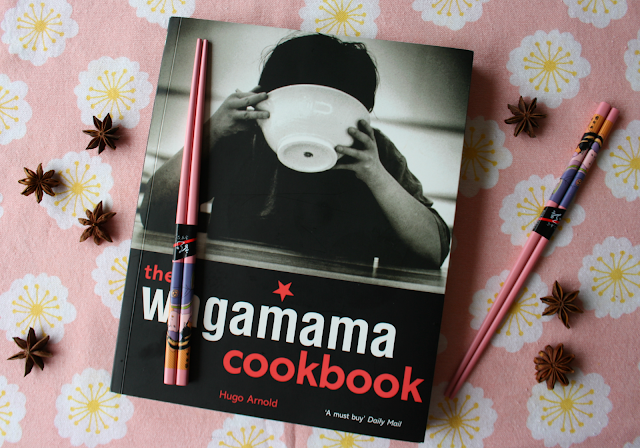 First of all, thank you so much for your comments on Angus's blanket. They were a delight to read and you were all so kind and complimentary - thank you.

This year, I am joining in with Penny at The Homemade Heart's Cookery Calendar Challenge, and my chosen book for March was The Wagamama Cookbook

by Hugo Arnold. I was delighted to receive a copy of this book as a surprise gift through the post from my friend Abigail and have spent many happy hours leafing through it. I am a big fan of the Wagamana restaurants and love their food, especially their ramen dishes. The book is well laid out, minimally styled and with clear - in instruction and font - recipes. No ribbon bookmark, but you can fold over the dust jacket to bookmark pages. (These things are important!)

I didn't introduce these recipes to Bella and Angus. We try to eat together as much as we can but sometimes it's just not possible, due to what time John gets in from work or what after school activities the kids are doing. I actually quite like the evenings when John and I eat together when the kids are in bed - it's rare time together to talk, and eat meals that they would not enjoy. 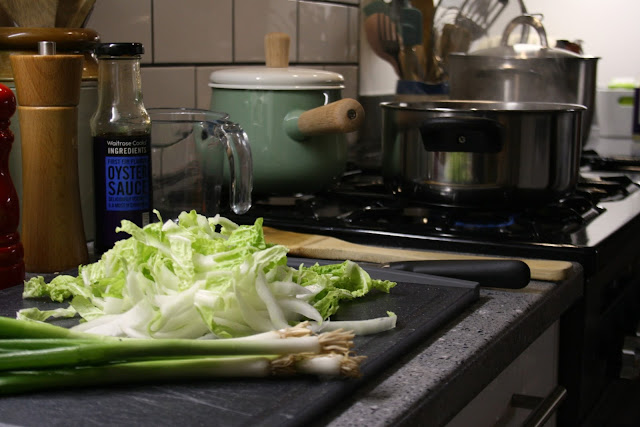 The first recipe we chose was Shichimi Spiced Duck Ramen. It wasn't very well planned, in that John just happened to see some duck (usually out of our price range) on offer in Waitrose, so he bought it, but we couldn't get shichimi seasoning so improvised with Chinese Five Spice and chilli. Probably very inauthentic and very inaccurate, but absolutely delicious.

The duck was rubbed in spices and pan fried before going into the oven. Ramen is all about the stock and I have to confess that I did not make my own here. I used shop bought chicken stock and gave it more depth of flavour with ginger, star anise and soy sauce. I just fiddled around with it until it tasted good, then threw in pak choi and spring onions right at the end. 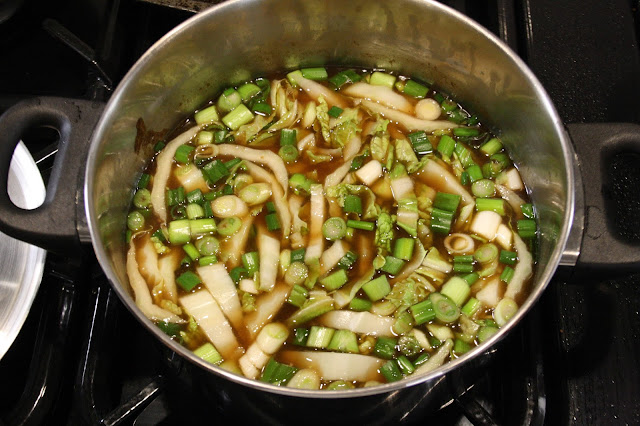 The stock was ladled over cooked noodles, then the duck arranged on top. 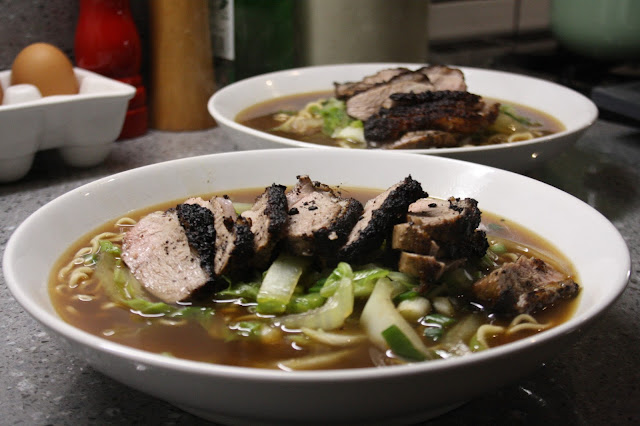 These pictures don't really do it justice, it all looks really brown. But take my word for it, it was sensational, and the duck was so meltingly tender and the broth was so aromatic. 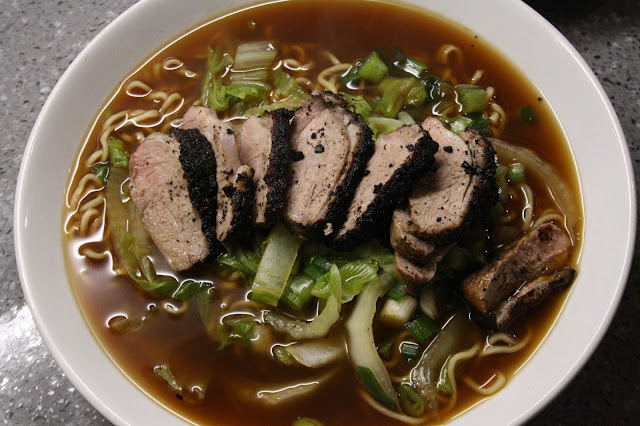 So, not a meal I would buy or cook for the four of us, but definitely something John and I would eat together again.

The second choice was Teriyaki Chicken Stir Fry. I think teriyaki chicken has unfairly become one of those cliched dishes, something that people choose when they want safe, Western, familiar versions of "foreign" food, like the chicken Tikka Masala of Japan. The thing is, like that famous curry, it's delicious and its lack of heat makes it very appealing to those who like milder food, like children.

It's so easy - the chicken is marinated in teriyaki sauce with chillies and garlic before being stir fried, then you add in peppers, pak choi and spring onions, and serve it with rice. 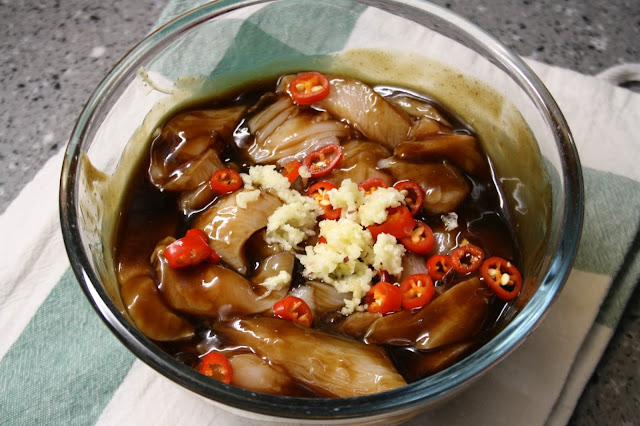 I found the shop-bought (what can I say, I'm lazy) teriyaki sauce I bought a little bland, but extra soy sauce soon perked it up. It was such an easy, tasty meal, and it occurred to me that the kids would definitely eat this, perhaps with less chilli and some broccoli on the side. 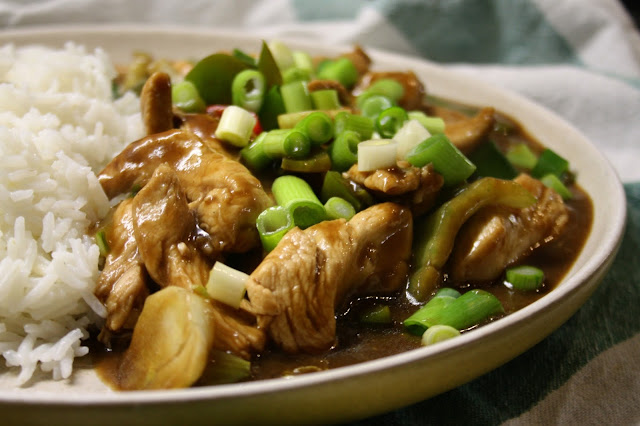 So, two very successful meals and I will report back on how teriyaki chicken goes down with my two critics, I mean children.

Stephane Reynaud. I'm already excited to try some of the recipes from there over the Easter holidays. You know, when I have a little spare time... 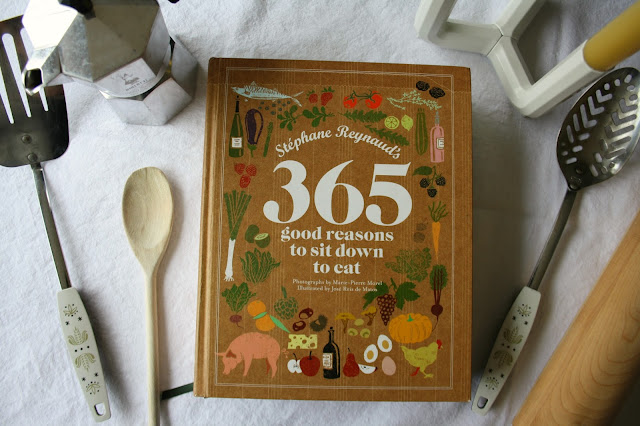