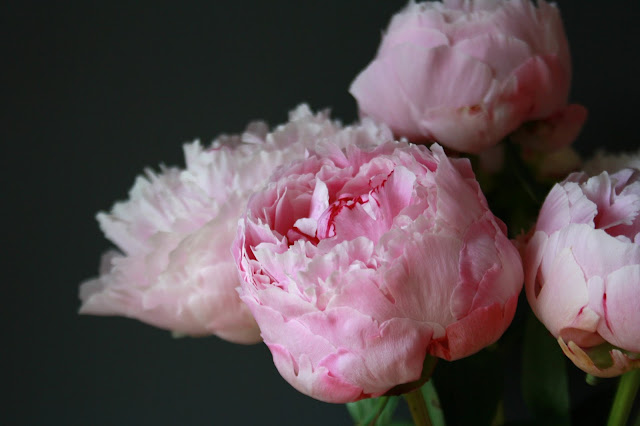 Thank you for your kind comments on my clutch bag. I am really glad you like it. You find me pretty shaken this morning by the the EU Referendum results here in Britain but as always life goes on. Today felt like a good time for a Make, Bake, Sew, Grow post, my little meander through all the things that are going on in my home and garden at the moment. My comfort blanket.

I have - until recently - never been able to master the French plait/braid.  This annoyed me greatly as I don't like not being able to do things. Many of my colleagues wear their hear in a variety of styles - full French plait, a little side plait going into a bun, a dutch plait/braid - and it always looks so pretty and I just kept thinking, it can't be that flipping hard. If I can crochet and sew, surely I can plait hair? 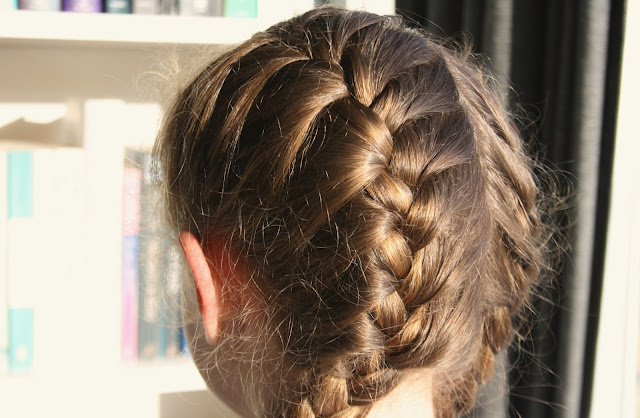 So, using my nine year old daughter and her waist length hair to practice, I have been working on Operation French Plait this week. These two pictured are a little wonky, but the two plaits she went to school with today (which took twenty five minutes and meant I didn't have time to make the beds or empty the dishwasher) looked pretty good. 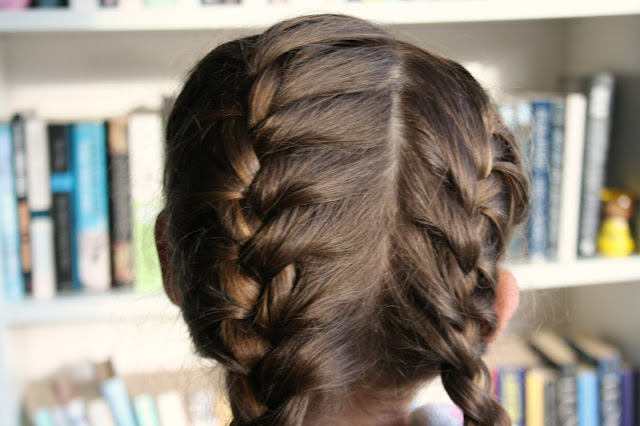 Next objective: learn how to do a Dutch plait and fish tail plait and - even better - do one of these creations in my own hair. If you need me I'll be in holding a hairbrush with aching arms. 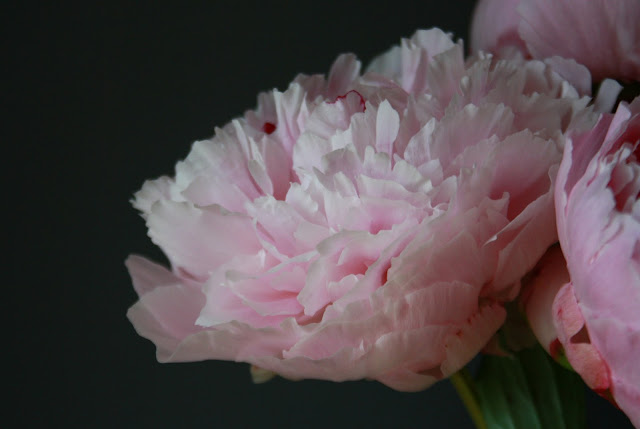 Peony season is short and sweet and they must be bought and appreciated. I also like them against the grey wall in the dining room, but I like anything against that colour if I'm honest. 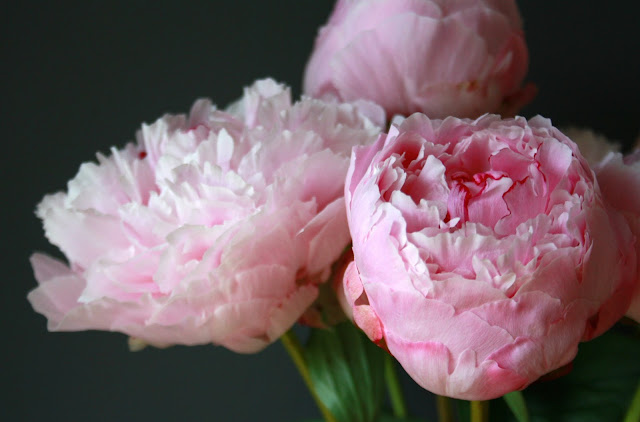 From the kitchen, rhubarb shortbread. Thank you for the idea CJ. 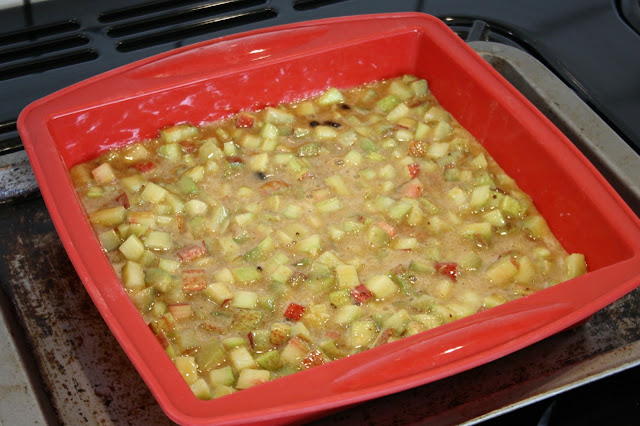 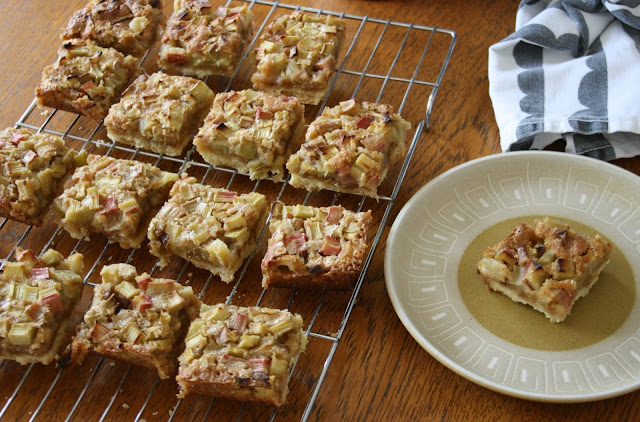 I made a batch on Saturday and it was so good that I made another on Sunday. 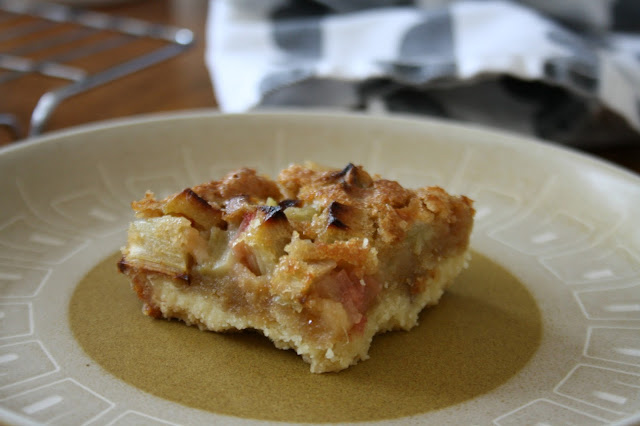 Fish pie for a meal with my parents on Father's Day. 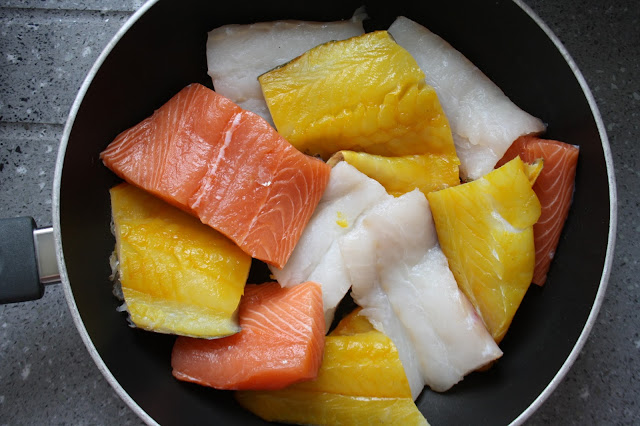 I poached cod, salmon and smoked haddock in milk then, when the fish was cooked, strained it and used it in the white sauce. 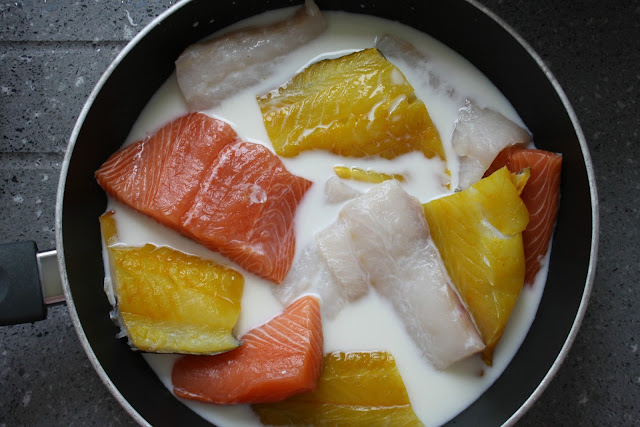 I flaked the fish into large chunks and then added some leeks I'd cooked for a while, plus lots of king prawns and sweetcorn. I like sweetcorn in fish pie, it is a good match -  it reminds me of chowder. I also chucked in loads of freshly chopped parsley, then topped it with mashed potato and baked it. I nearly forgot the prawns and had to push them in, one by one, under the mash, then cover it all over again. 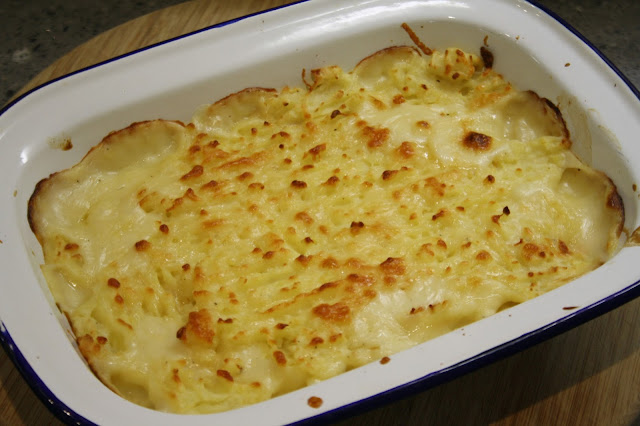 I made a separate one for the kids without the prawns, leeks or parsley and served theirs with just broccoli on the side. They both asked for seconds. Veg on the side of the plate is acceptable to them - even tasty - but veg mixed in with fish in a sauce is still regarded as Highly Suspicious. 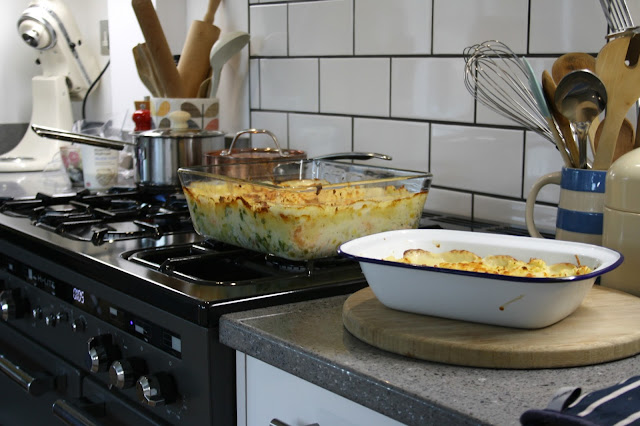 It's a bit of a faff, fish pie, the kind of dish that uses four saucepans, but it's so worth it.

I made a start on my sampler and now that I've started, it's all I want to sew. Those little motifs are just the right size - small enough to be quickly completed without getting bored, and big enough that you feel satisfied when you complete one. I'm going to enjoy this project. 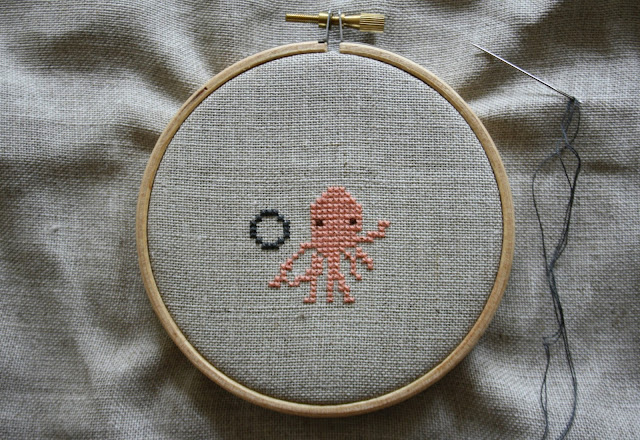 I continue to crochet the odd row here and there on Angus's blanket. 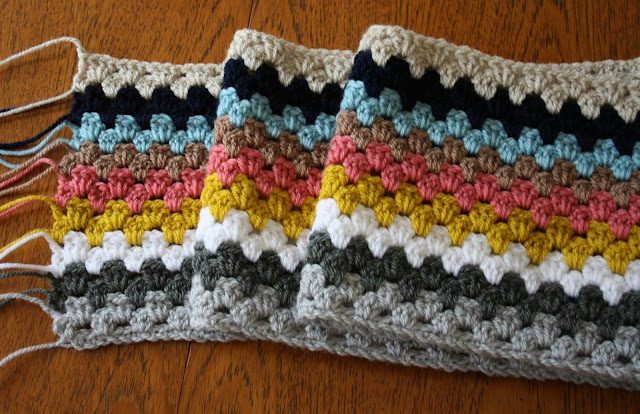 It's still at the stage where it looks like a scarf though. I've got a long way to go yet. 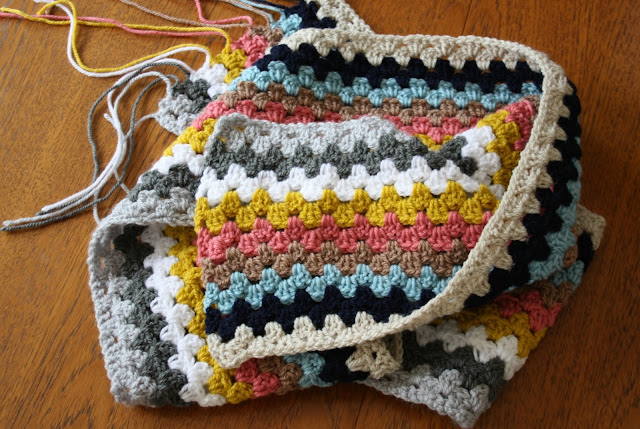 Everything is decidedly very green in the garden at the moment, but a little lacking in colour. The riot of pinks, reds and purples in May has gone over now, and I remember from last year how May was the best month in the garden. I need to figure out this colour-through-the-summer thing. Find plants that flower in June and July. 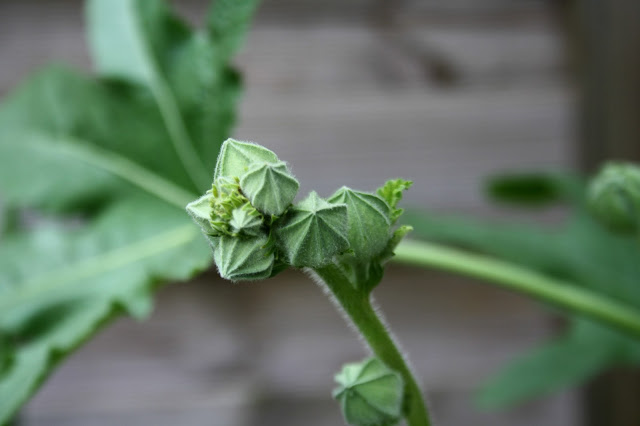 We remain on hollyhock watch and they grow taller and taller, well past the top of the six foot fence. 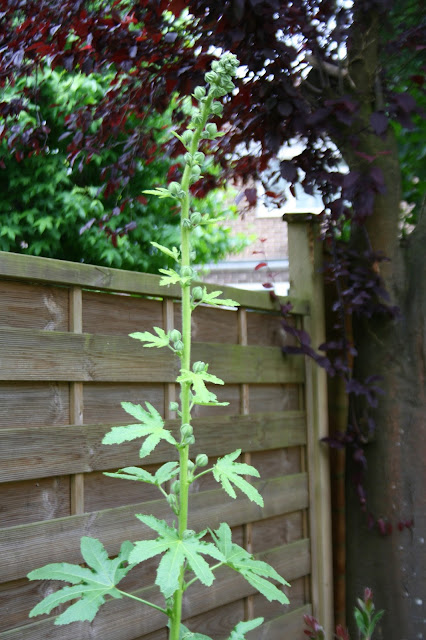 I very much hope these are buds, as they run up the stem in clusters with their odd, slightly geometric shape. 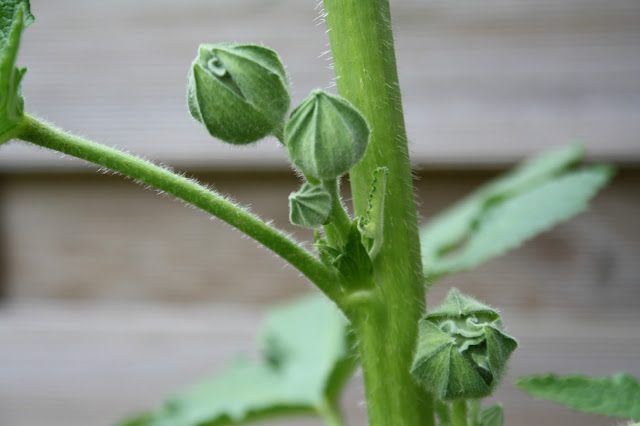 The redcurrants are reddening. 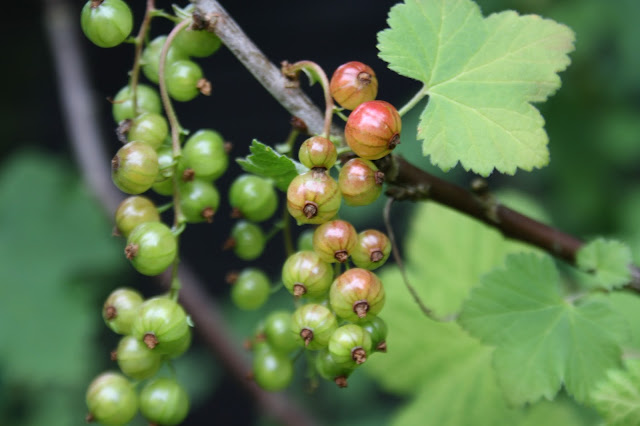 The blackcurrants have a way to go yet. 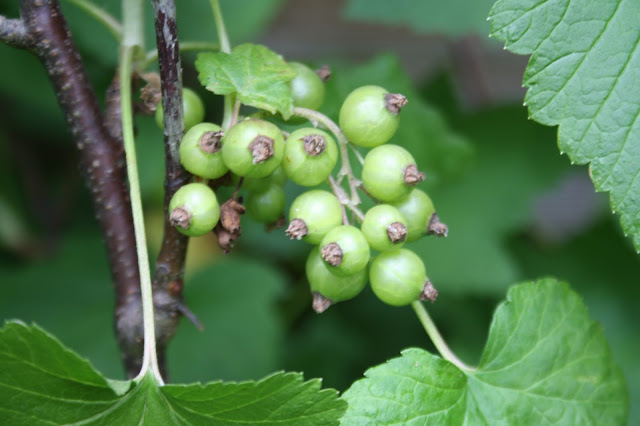 Funny how I am suddenly very interested in these, since ice cream became a possibility.

I wish you all a very happy weekend. We are going camping. It's probably going to rain but there will be much laughter and friendship, chatting around a campfire with wine and putting the world to rights - just what I need today.