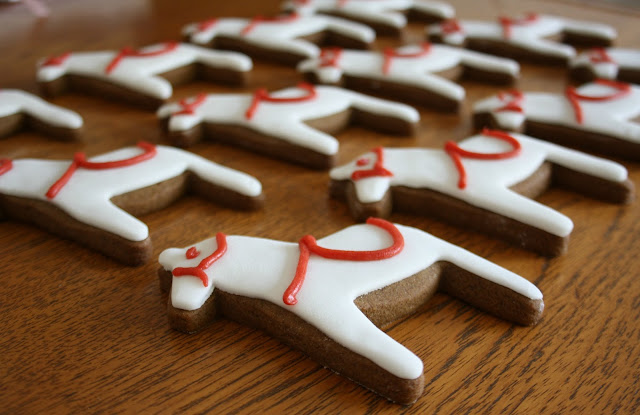 Last Christmas, I was given a dala horse cookie cutter by a good friend of mine. I like Dala horses, like their stocky shape and colourful patterns, their roots in Swedish history and folklore, and find them totally charming. 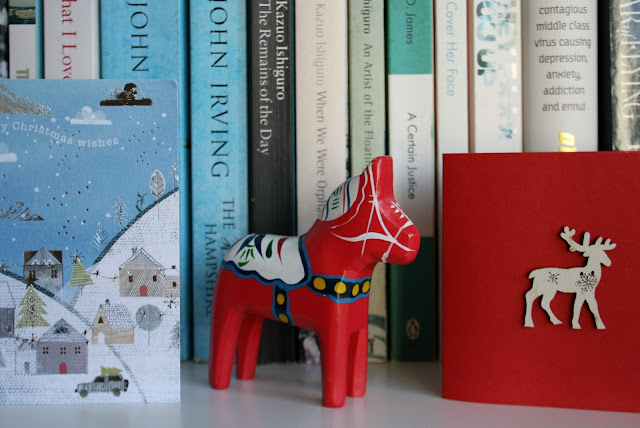 I have a couple I brought back from a holiday in Copenhagen a few years ago; a little bright red one bought at the airport in a tacky souviner shop, and a classier blue and white one purchased in the glorious Illums Bolighus department store in the city centre. 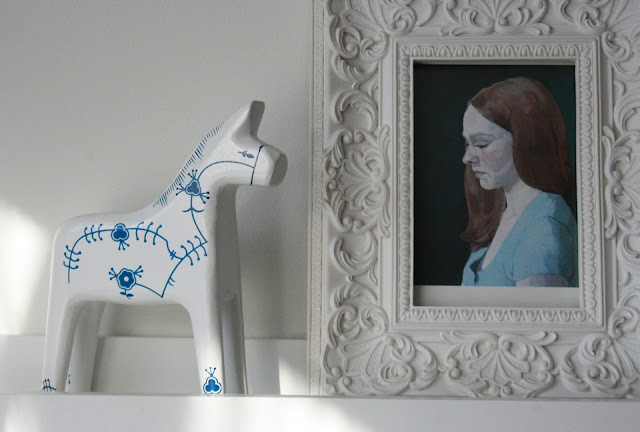 I wouldn't say I collect them, but if I were to see one in a charity shop I'd snap it up. I have for a long time wanted to make some iced dala horse gingerbread biscuits - partly to give as gifts, but mainly for my own amusement - and so today, while it the weather was vile outside, I baked. 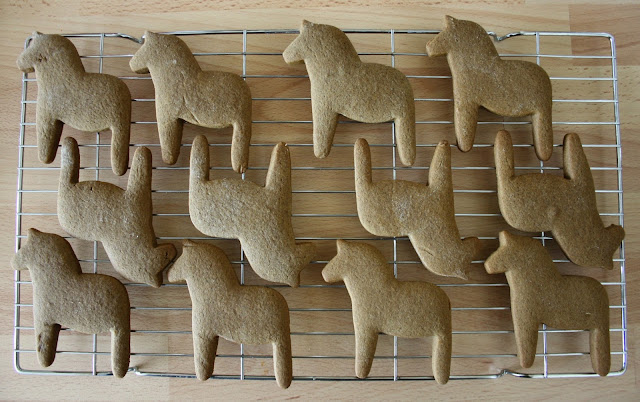 The plain gingerbread doesn't look particularly inspiring. First I tried white icing on brown but as you can see, it looks like a child did it and I actually tried really hard here. Those people who bang out 48 identical iced biscuits on the Great British Bake Off while under time pressure...well, hats off to them. 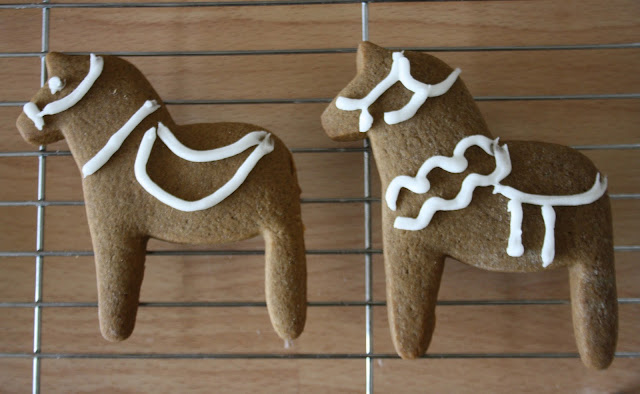 So I covered each biscuit in while fondant icing. Rolling and cutting these shapes out was sheer pleasure after the icing pen traumas and they instantly looked...less brown. 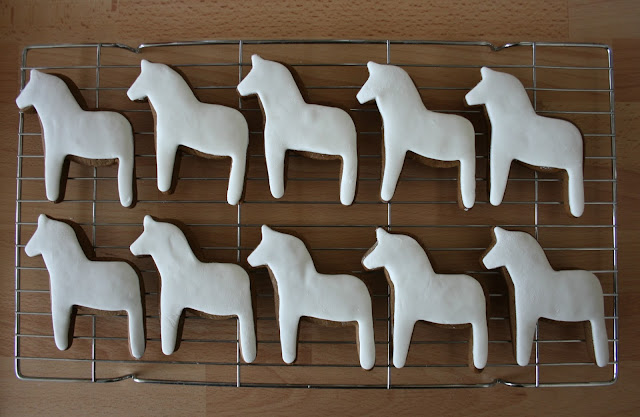 And then out came the red icing tube and while I attempted to draw on some horse related decoration. 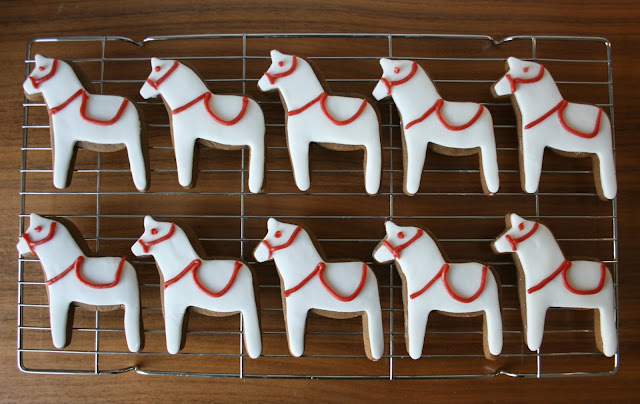 They don't look quite how I imagined they'd turn out, but I rather like them. The red and white is Christmassy and the simple shape and decoration is enough. But most importantly they were fun to make. Not everything has to be perfect (this is a revelation for me!) and sometimes it's just enough to spend an hour or two in the kitchen making something nice. 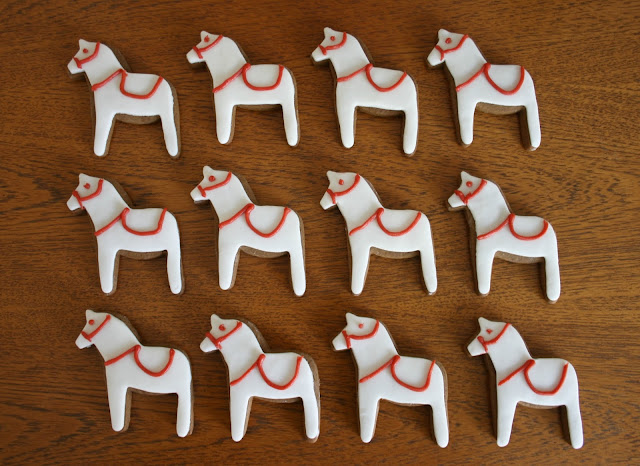 When the red icing has hardened, they can be piled up and put into cellophane bags or boxes to be given as gifts. Or you can just eat them - they keep really well in an airtight container. We'll be giving some away and eating the rest. 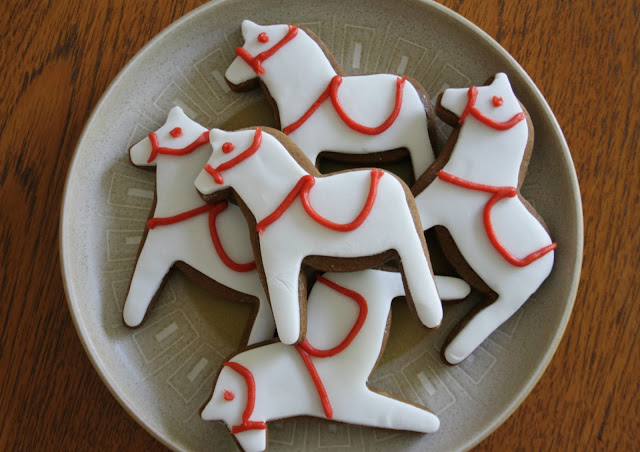 And while all this was going on, Bella and Angus were engrossed in their own biscuit decorating. After I'd showed them how to roll out the fondant icing, I just gave them total free reign to decorate their gingerbread hearts with whatever they could find in the cupboard. 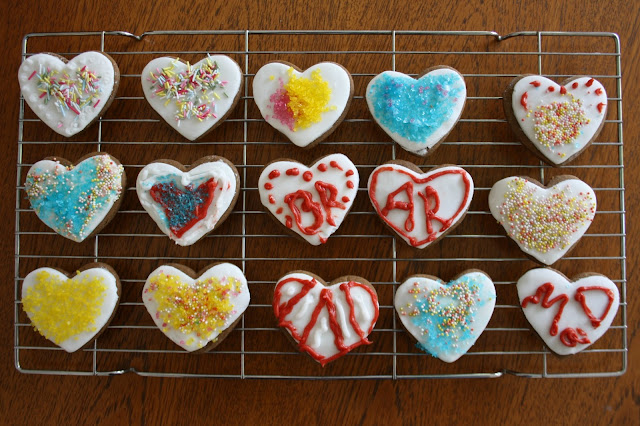 I think you'll agree that they outdid themselves here. A close up is necessary so you can appreciate just how fully loaded these biscuits are. 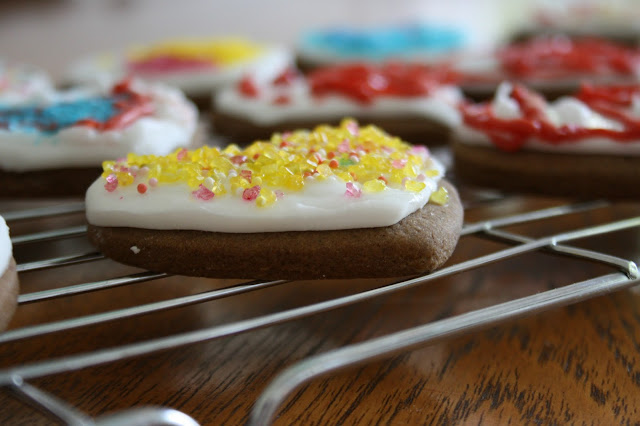 There are personalised ones too...M&D for mum and dad. Lucky us. 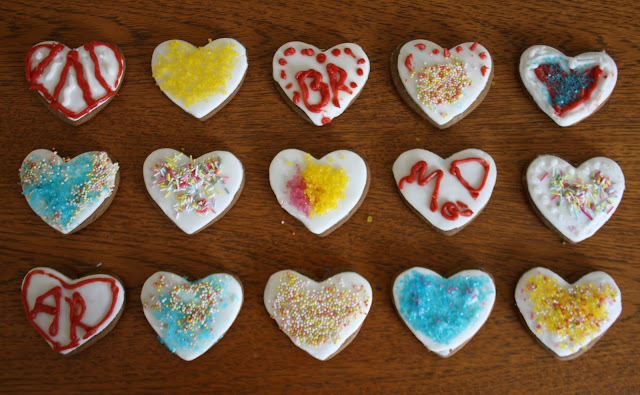 It was one of those rare harmonious kitchen moments; the children shared the rolling pin and did not bicker, I did not shout, the radio was on quietly in the background. The kitchen was a complete disaster by the end of it, with icing sugar over every surface and cake decorations crunching underfoot, but we had a lot of gingerbread to eat and that is always a good thing. 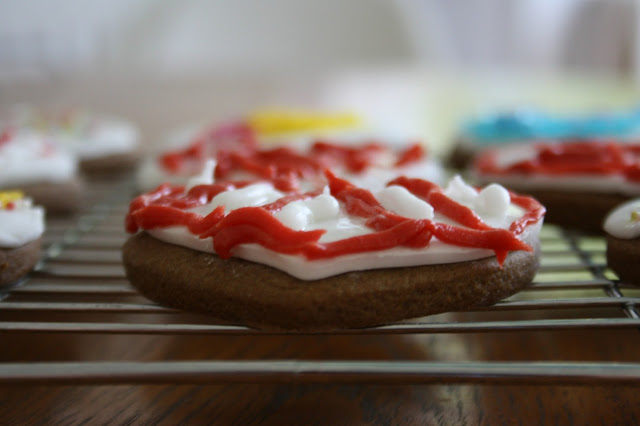