I Made A Poncho 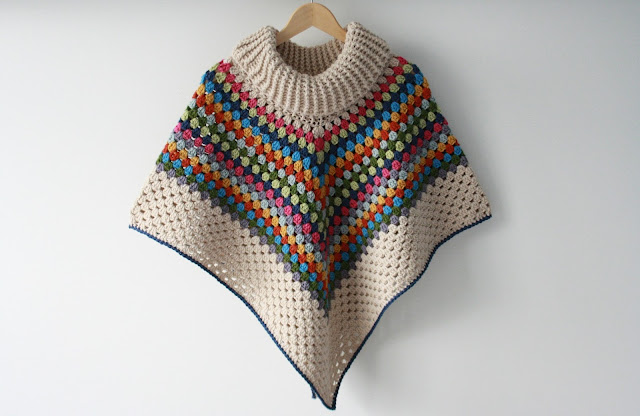 I know, I'm supposed to be making blankets, but they all fell by the wayside as I became obsessed with making myself a poncho. I've essentially made myself a wearable blanket, I do realise that. 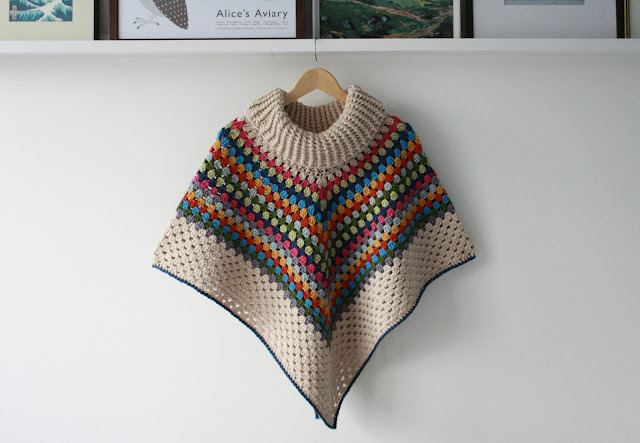 The pattern was originally published in Simply Crochet Magazine some time ago and I bought the pattern from Ravelry. I had seen the pattern here and there on blogs for some time and I don't know why I suddenly had to make it. The onset of autumn maybe?

While the main body on this pattern is granny treble clusters, the cowl neck was a bit of a challenge for me. It's made up of front and back post stitches which create the ribbed effect. 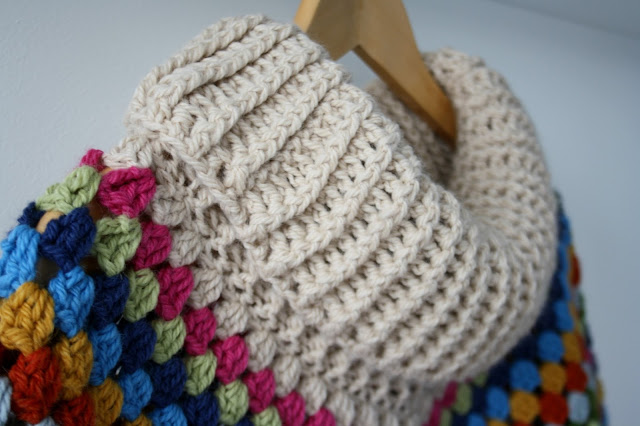 Lucy's post and some Youtube videos were very helpful and, as is so often the case, it's actually very easy once you get going. The effect it creates is wonderful to crochet, so structural and chunky. It's like the crocheters version of knit one, purl one. 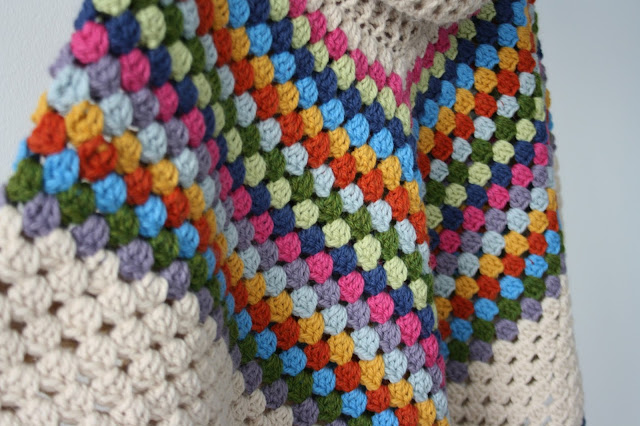 After the cowl neck is complete, the fun part starts. I bought the yarn (Drops Nepal) and colours the pattern suggested, mainly because I thought they were all beautiful and just the kind of things I would've chosen anyway, but I did tinker around with the suggested order. 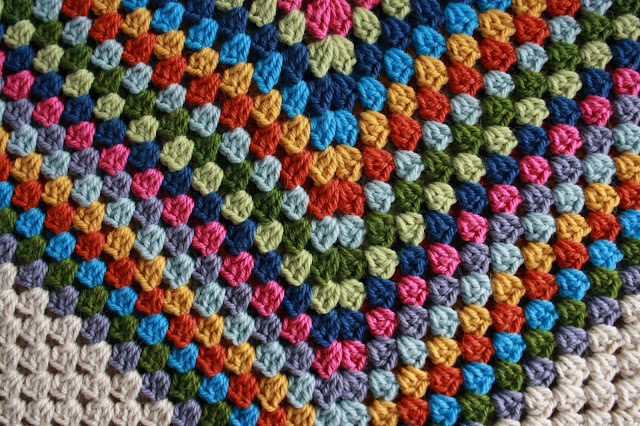 After the block of colour work, the pattern calls for a few more rows of the ribbed stitch, followed by some tassels. 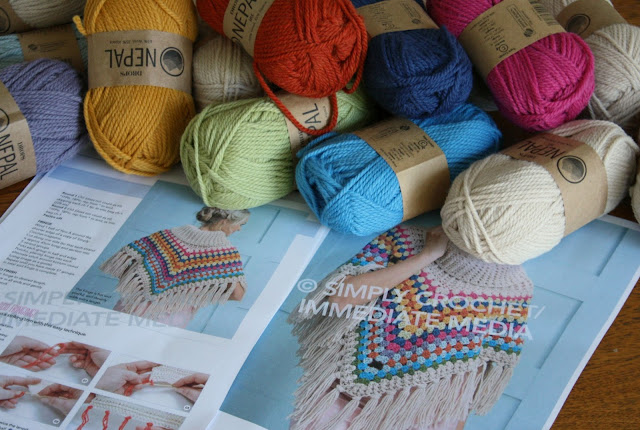 I think the tassels are a bit love them or hate them. I wont say I hate them but they just weren't doing it for me, so I worked ten rows of treble clusters in the same colour as the neck instead, making  it long enough to reach my elbows. 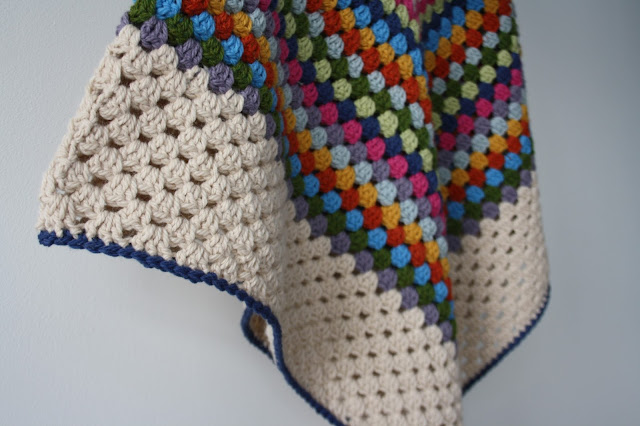 It needed a border, but nothing too big. It's a loud and busy pattern with a lot of colour, so I thought the border needed to be neat and unfussy. A row of double crochet in navy blue pulls it all together really nicely. 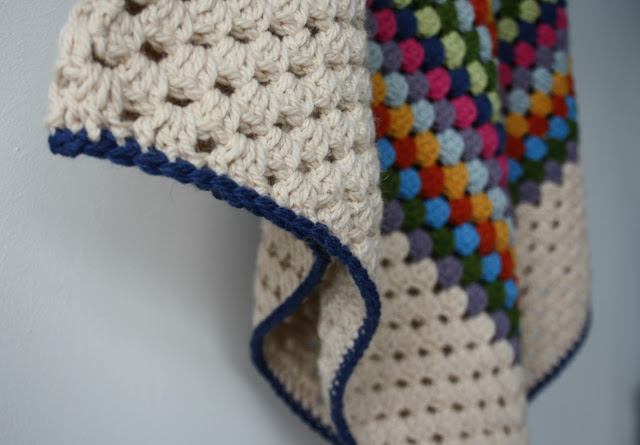 After a quick block, it was ready to go. I love seeing it hanging here in our bedroom, all that colour against the white wall. 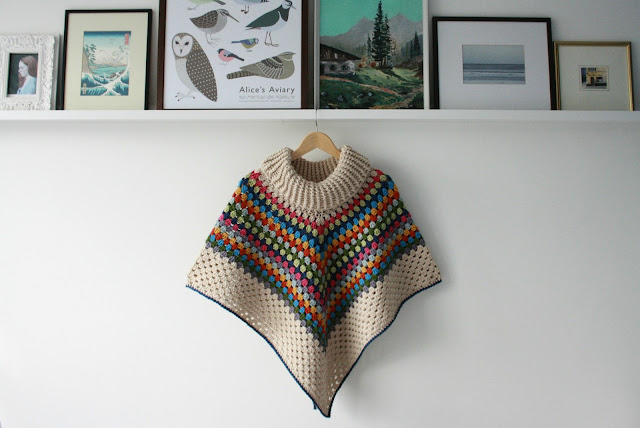 All together, it took three weeks to make. I am thinking about making a monochrome version in pale grey, with black, white and shades of grey where the colour would be, and maybe just a little deep red thrown in to stop it being too cold. What do you think? What colours would you choose? My colleague has made one in different blues and it's quite stunning, and my mum would like a very neutral version in shades of brown and cream. I think that's the beauty of the pattern, it's versatility.

I wish I had a photo of me wearing it. Sorry. I'll get John to take some soon, hopefully while walking through the woods or collecting conkers or something equally autumnal. But I have worn it a lot this week and have received many compliments and no funny stares or jokes about panpipes, so that's good.
Posted by Gillian Roe at Wednesday, October 21, 2015