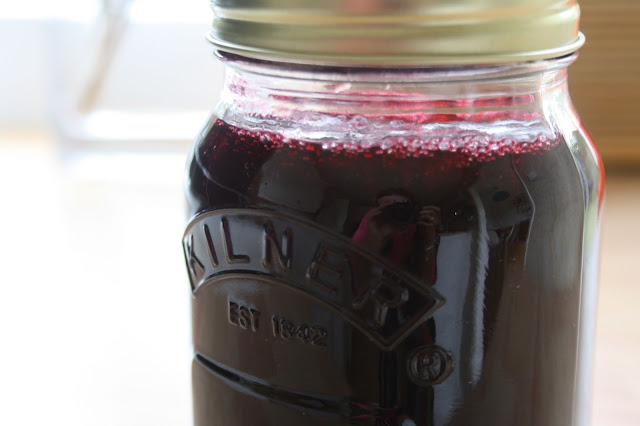 I always think of blackberries as a September thing and every year I'm a bit surprised to see them in the hedgerows in August. They perfectly sum up this seasonal crossover from late summer to early autumn and I was glad to spend most of the bank holiday weekend surrounded by them, both indoors and outside. Last Saturday morning I went blackberry picking with the children and my parents while John worked, and between us we picked 13 lbs, or almost 6 kgs, of fruit, plus some elderberries too. 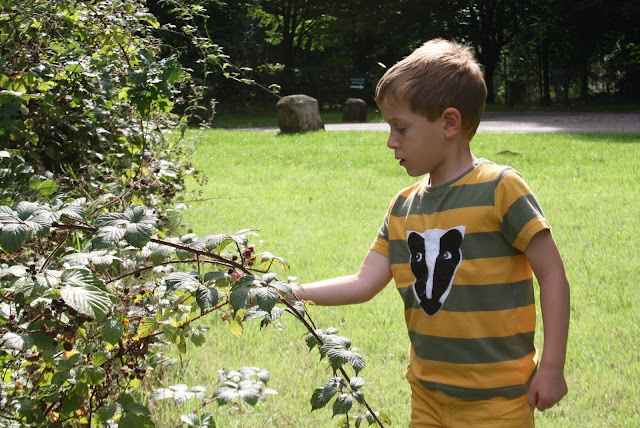 The rest of the weekend was spent - happily - in the kitchen. My last weekend pottering before going back to work and I wanted to savour it. Just me and my bubbling pans, with the radio on in the background. Faffing with pretty labels. Lovely. 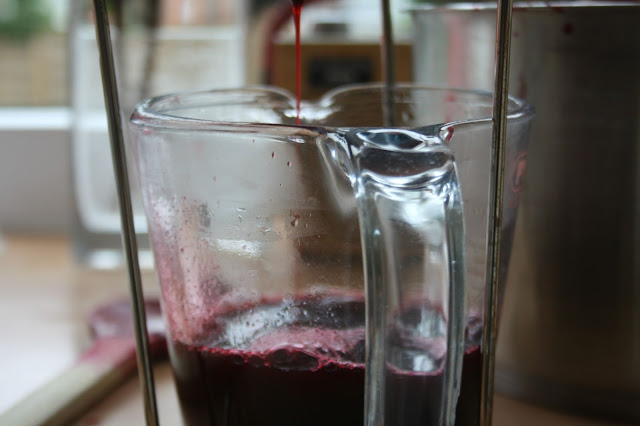 I made Hedgerow Jelly first. I persist in making this mainly because I really like the evocative name and it reminds me of the Brambly Hedge books. The idea is that you use blackberries and all kinds of other seasonal hedgerow fruit - like sloes, elderberries and rosehips - plus a few windfall apples too. I used mostly blackberries (about 2 pounds or 1 kg) with two chopped cooking apples and a few big handfuls of elderberries. These completely changed the taste of the traditional bramble jelly, darkening and enriching it and adding a herby, almost slightly smoky flavour which is unbelievably good. It didn't seem so sweet either, which I liked. Then I made a batch of plain bramble jelly, which I think it one of my favourite jams/spreads ever. I like it stirred into yogurt, spooned on top of rice pudding, on toast or crumpets. 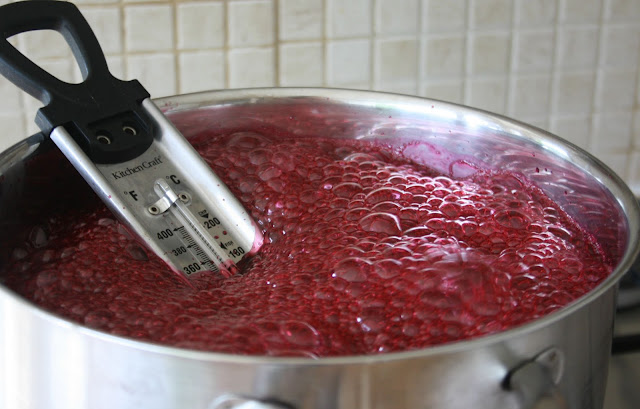 This is how I make my bramble jelly: 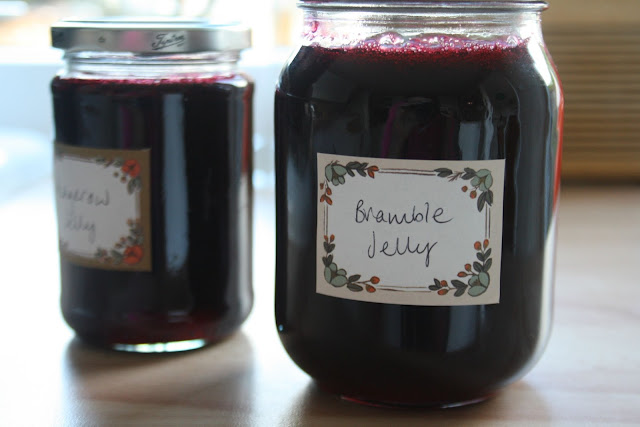 Some jam making tips, while I think of it: 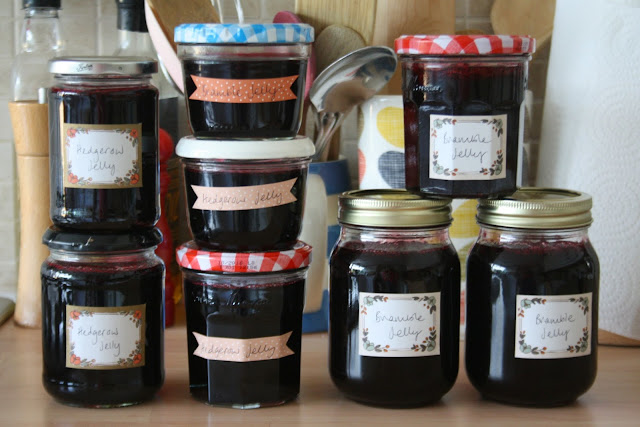 If all this sounds like too much hassle, then I have an amazing discovery which I feel duty bound to share with you: blackberry gin. I had no idea how easy it is! How have I never done this before? I thought there was some other kind of dark art involved, but no, it involves three ingredients and takes about five minutes.

You need:
That's it. Fruit, sugar and booze. 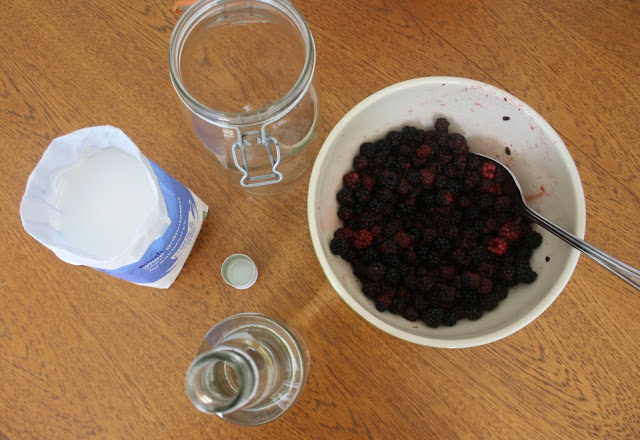 Put it all in the jar, shake well and put in a dark place. 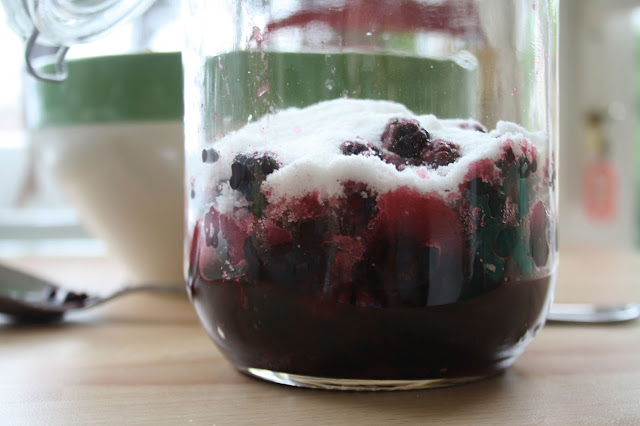 Shake every day for the first two weeks, then once a week. Leave for up to three months then strain into a clean bottle. This is my version of a recipe based on about several slightly varying ones that I found on the internet and in cookery books. I think if you keep these ratios of alcohol, fruit and sugar roughly the same you can't go that far wrong. 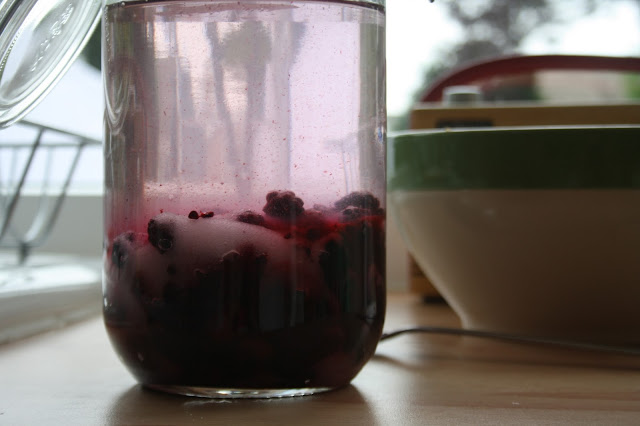 And it'll be ready just in time for Christmas. I'm a really dutiful blogger so I'll be sure to taste it well and report back on the flavour.

I kept back some blackberries for the freezer, frozen in small amounts ready for crumbles. Blackberry and apple crumble is one of my favourite childhood puddings, and I make crumble a lot as I find pastry/pie crust a bit overrated, both to make and to eat. 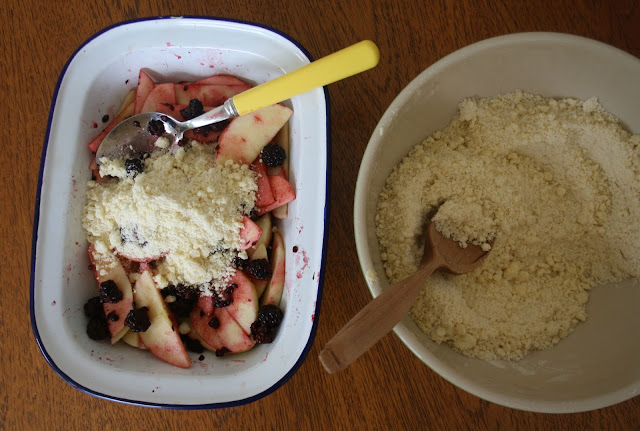 I wanted to eat this with custard but forgot to buy some, so we had it with vanilla ice cream instead. Another nice summer to autumn cross-over.