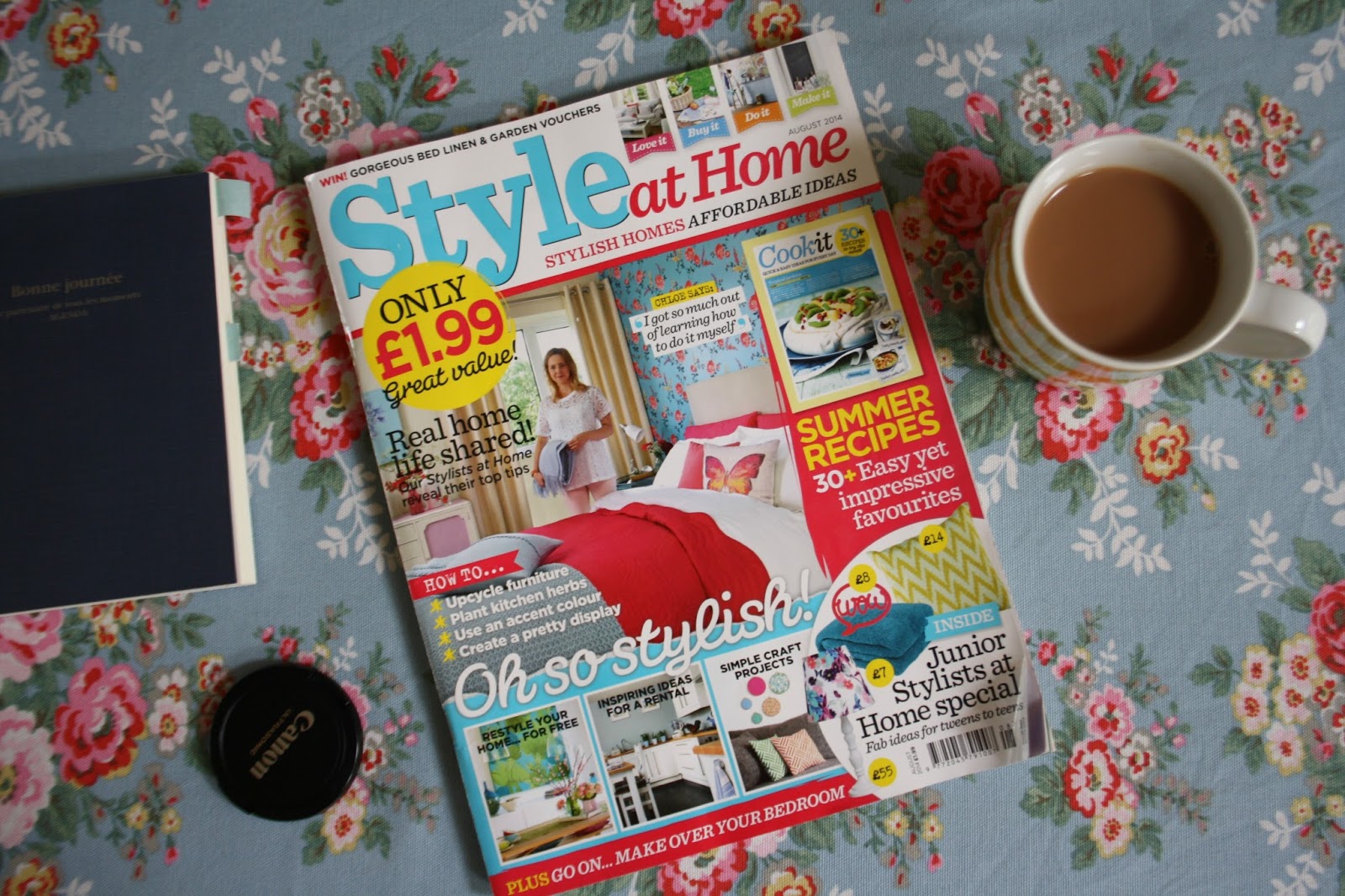 A rather exciting thing happened today. August's issue of Style At Home went on sale. Not something I might ordinarily have written in my diary, if I'm honest, but this one was special because our home has been featured! Yes, it's true! I honestly didn't know how to title this post. That Time Our House Was In A Magazine? I Feel Awkward? Fame at Last? I don't know, so I just went with the magazine title. What is the right etiquette in these situations I wonder? Squeal or feign indifference, tell no-one or tell everyone?  I feel funny about this. Mainly VERY excited, thrilled, happy and giddy, but also a little embarrassed, a little shy. Silly I know.

I was wondering how to broach it with friends on Facebook but there was no need, my Mum did it for me. She's been possibly more excited than me and as soon as she'd gotten her hands on a copy, she photographed it, uploaded it and tagged me. (My Mum loves social media. It's only a matter of time before she's on Instagram too, so she can embarrass me there as well.)


I always wondered how people got their homes in magazines. Do they email in their photos or are they friends with someone who works on the magazine? Or are they just well connected media types? I thought I'd tell you what happened to me as I am always curious about this sort of thing. Back in February I was contacted by Photoword who look for homes to feature in magazines. They are an independent photographer/writer team, not attached to any one publication. They asked if I was interested and if I could send them some snaps of our house. I was, and I did, and then a few weeks later Colin, the photographer, came and took some "reccy" photos - very quick ones but on a much better camera than mine - to show to a selection magazines. A couple of weeks after that Annabelle, the writer, rang to say that Style at Home were interested and it went from there. Colin came to the house for the day in March (on a gloriously sunny day) and spent all day taking photos. On that morning, there existed a strange state of utter calm, tidiness and cleanliness in our home. It has never been that tidy before and never will again. There's nothing like a photographer coming to motivate me to get those niggley jobs done, sort the piles of clutter, wash the cushion covers.

Colin is such a lovely man - I grilled him on everything he knew about photographing houses, the poor man. and he was very patient with me. I was fascinated by all the details - the magazine requested that I didn't wear heavy woollens in the photos, as it would be a summer edition. Also, no daffodils in any photos, as they are too seasonal. Apparently there is a four month delay between writing or shooting for a magazine, and it's release. I've always been curious about Christmas magazine editions - do all those people deck out their house for Christmas in August?! Well, yes they do, although sometimes a house might be photographed in December and then featured the following autumn. Sorry, I am going on a bit here. It's just that, as someone who's been buying "house-porn", as John calls it, since I was 20, I am fascinated by how all this works. Colin came with a boot full of props, just in case I had no vases. Luckily I have plenty. There were lights and tripods and big lenses and I'm kicking myself for not taking some photos while it was all happening. I spent an hour on the phone to Annabelle who asked me all about our house, then she wrote the article as though I'd written it. About a week later the copy and photos were emailed to me so I could check I was happy with it all, and then it went off to the magazine. I didn't get paid. I didn't ask about money and I didn't do it for money. I agreed as I thought is would be a lot of fun, which is was, and an experience that I wasn't likely to ever have again. 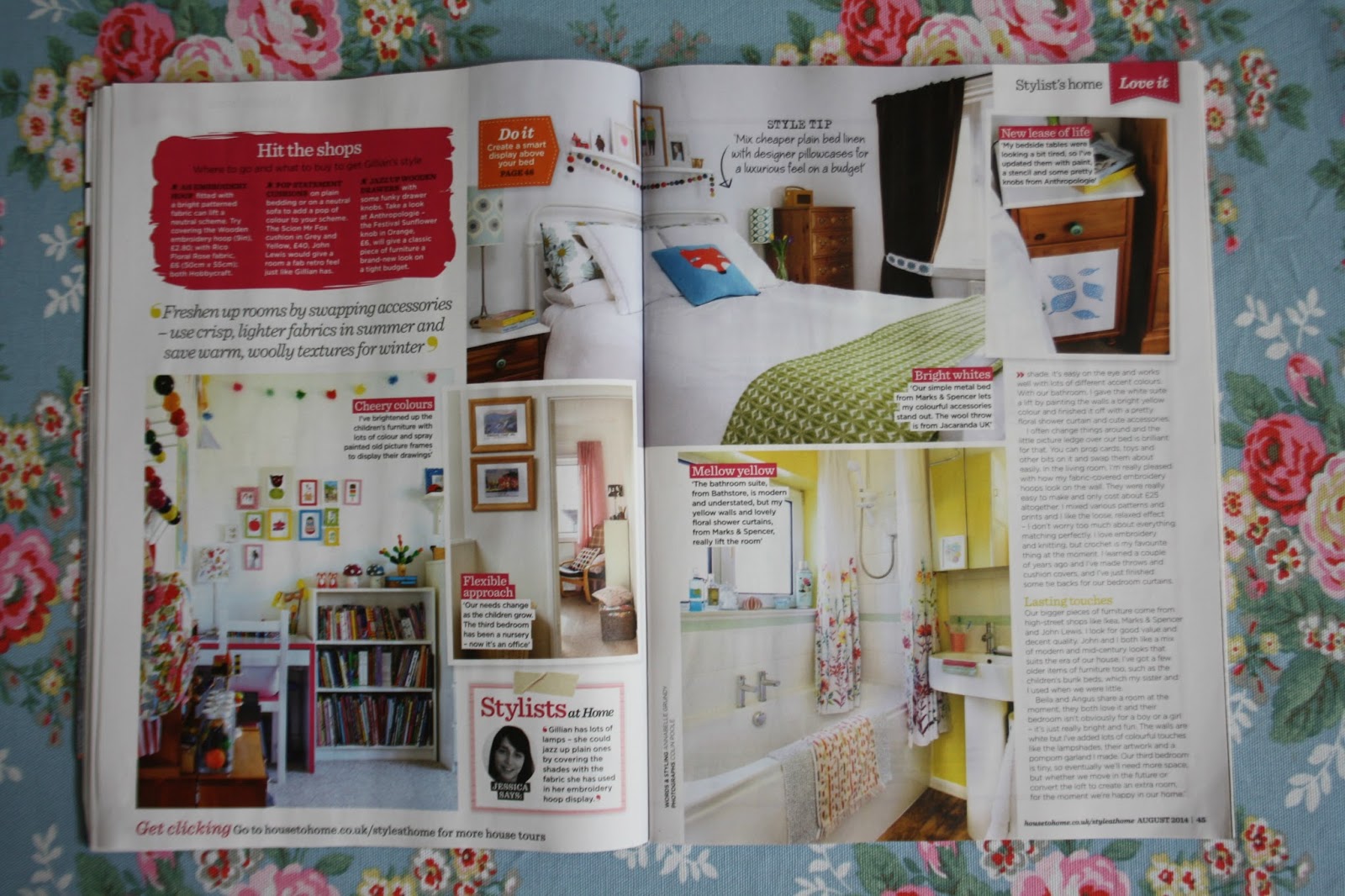 I always thought houses that appeared in magazines had to have something that we didn't have, like huge budgets, fabulous locations, and owners who were always architects, bankers or interior designers. I went off a lot of interiors magazines a while ago as they felt too aspirational to me, just too many industrial apartments, vast London townhouses, and ancient farmhouses with acres of land. Where are all the houses that normal people live in, I wondered. Apparently 32% of Brits live in a semi-detached house. How do all these people decorate their homes, that's what I always wanted to know. Well, I think Style At Home is very good at reflecting a more...achievable style of interior design. The emphasis is on high street buys and make it yourself, and I like that very much.

I feel I should point out now that we've had a broken toilet sitting in our drive for the past ten days. The plumber is supposed to have taken it away after replacing the one in the downstairs loo, but he keeps forgetting. If it stays there much longer I'll have to plant a geranium in it.
Posted by Gillian Roe at Wednesday, July 02, 2014