On The Creative Front

Hello! I promised you an update on recent creative activities, and here we are. First, I wanted to show you two Christmas gifts I made back in December which I couldn't post about before. My mum has recently discovered crochet and I think it's safe to say she's found it as addictive, rewarding and enjoyable as I have. She asked me to make her a tool roll in which to store her crochet hooks and we chose the fabric together when she came to stay back in the autumn. I followed a very good pattern written by Jooles of Sew Sweet Violet, published in Mollie Makes issue 28. The pattern is really for a brush roll, but can easily be used for other implements. Anyway, it's really a very good pattern, and my mum was very happy with her gift, and I was even happier to be able to give it to her. Apologies for the electric light photos - I didn't remember to photograph it until we were about to leave and return to Leeds.

The other item was my Christmas present to John, a scarf. I finished this at about ten pm on Christmas Eve while sat next to him on the sofa, so it was not exactly a surprise for him. But I wrapped it and put it under the tree all the same and he looked happy when he unwrapped it and tried it on. The colours are his choice and he was VERY specific about them. Oh my goodness. No deviation was allowed as, you see, John is a Leeds United fan and wanted the colours to be club colours - they had to be just so. He hasn't been to a live match in about ten years, he isn't a season ticket holder, but that man loves his football, and his local football club in particular. He insisted on nice yarn (I used Debbie Bliss Cashmerino) and he didn't want it too wide...on and on he went. But he loves it and wears it every day, and the blue and white suit his colouring so I suppose it could be worse. 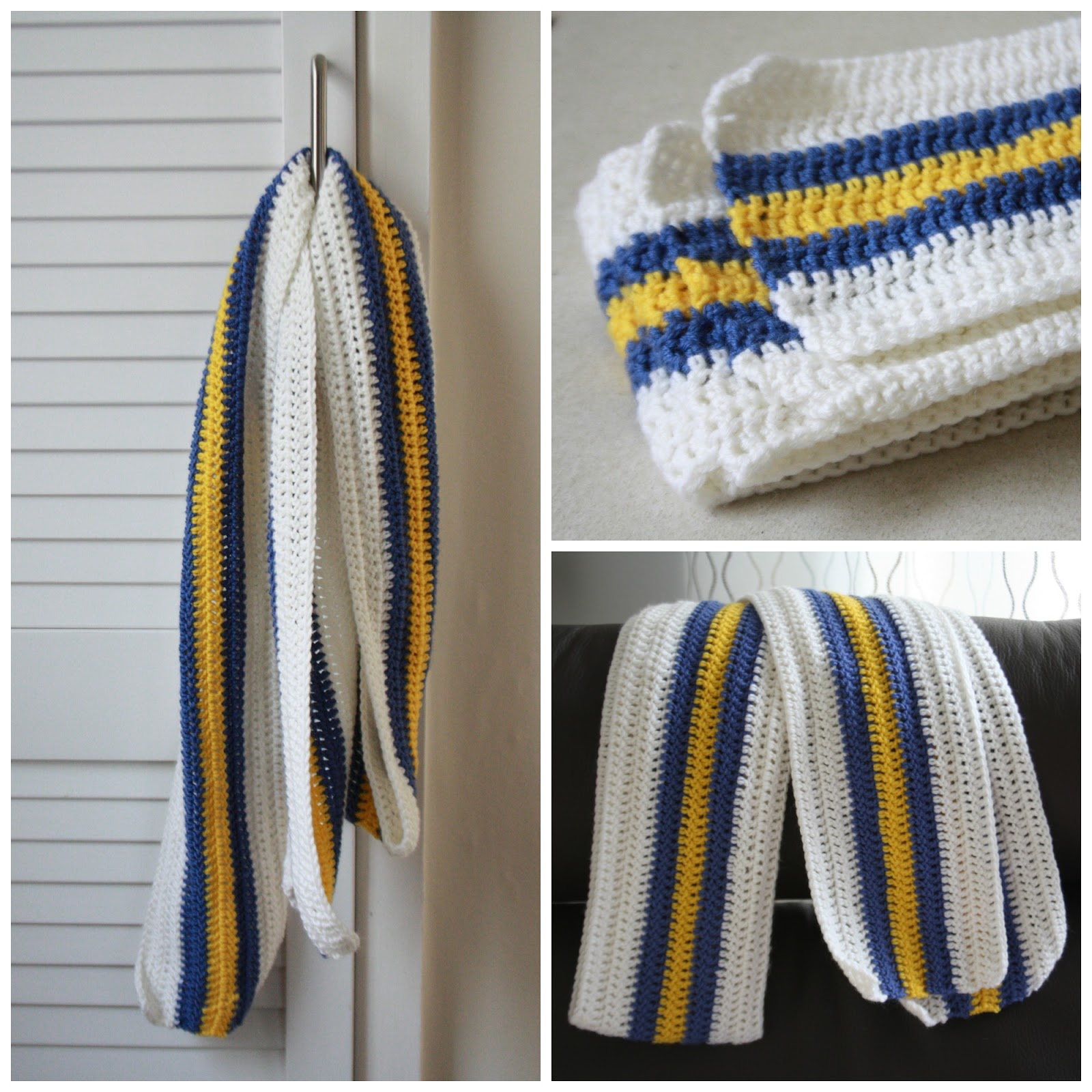 Angus noticed John's scarf and John, not one to miss an opportunity to encourage a passion for Leeds United in his otherwise football-indifferent son, suggested I make one for Angus too, which I've started but not got very far with. And then of course the dog had to have one and it's all getting a bit out of hand and I am sick to death of the sight of that bright yellow and blue. Have you had to create any particular woolen items for sports mad family members? 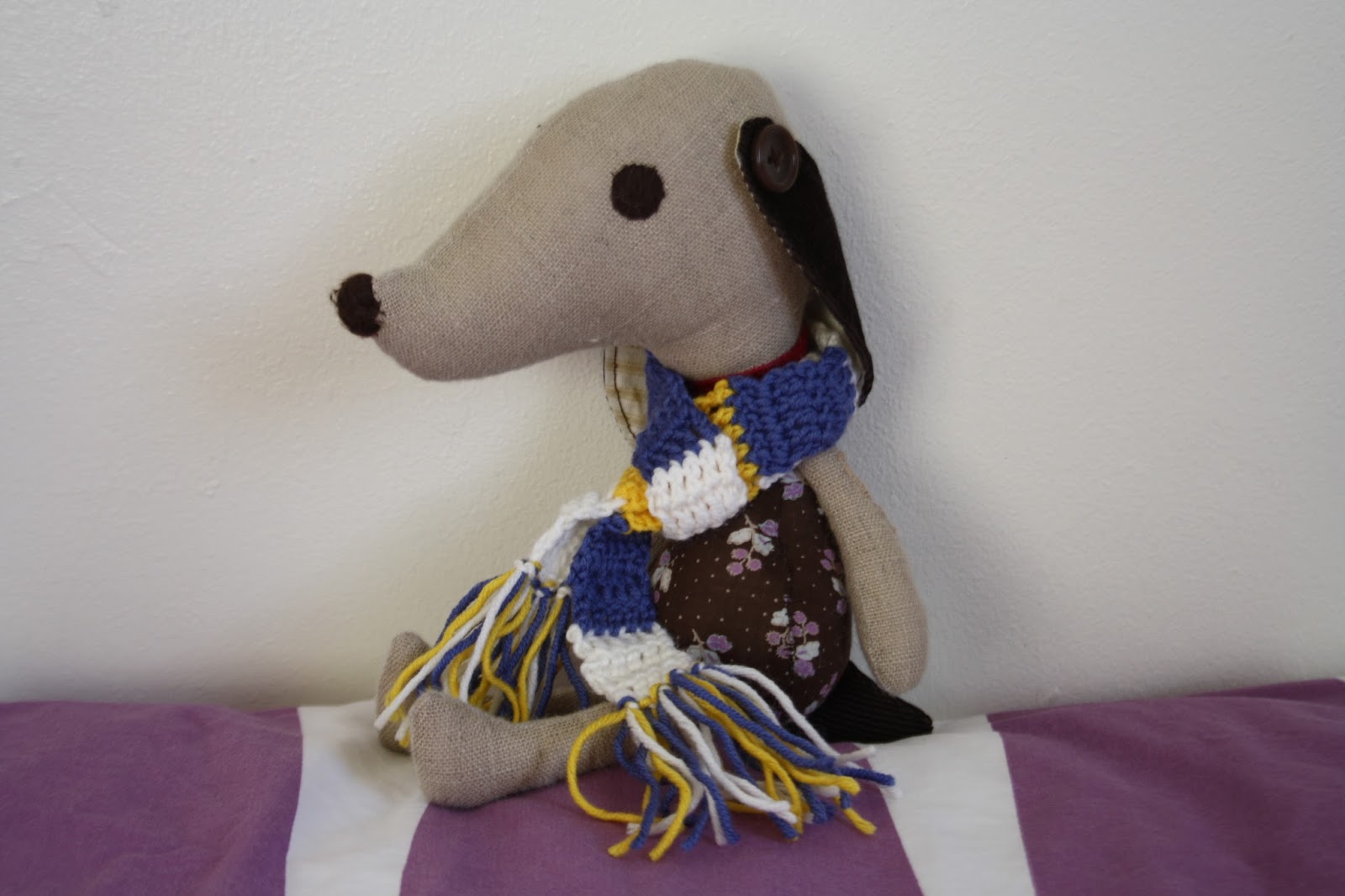 Here are some much prettier photos.

I spent a happy Sunday afternoon on the sewing machine a few weeks ago making some more clothes for Bella's rabbit. 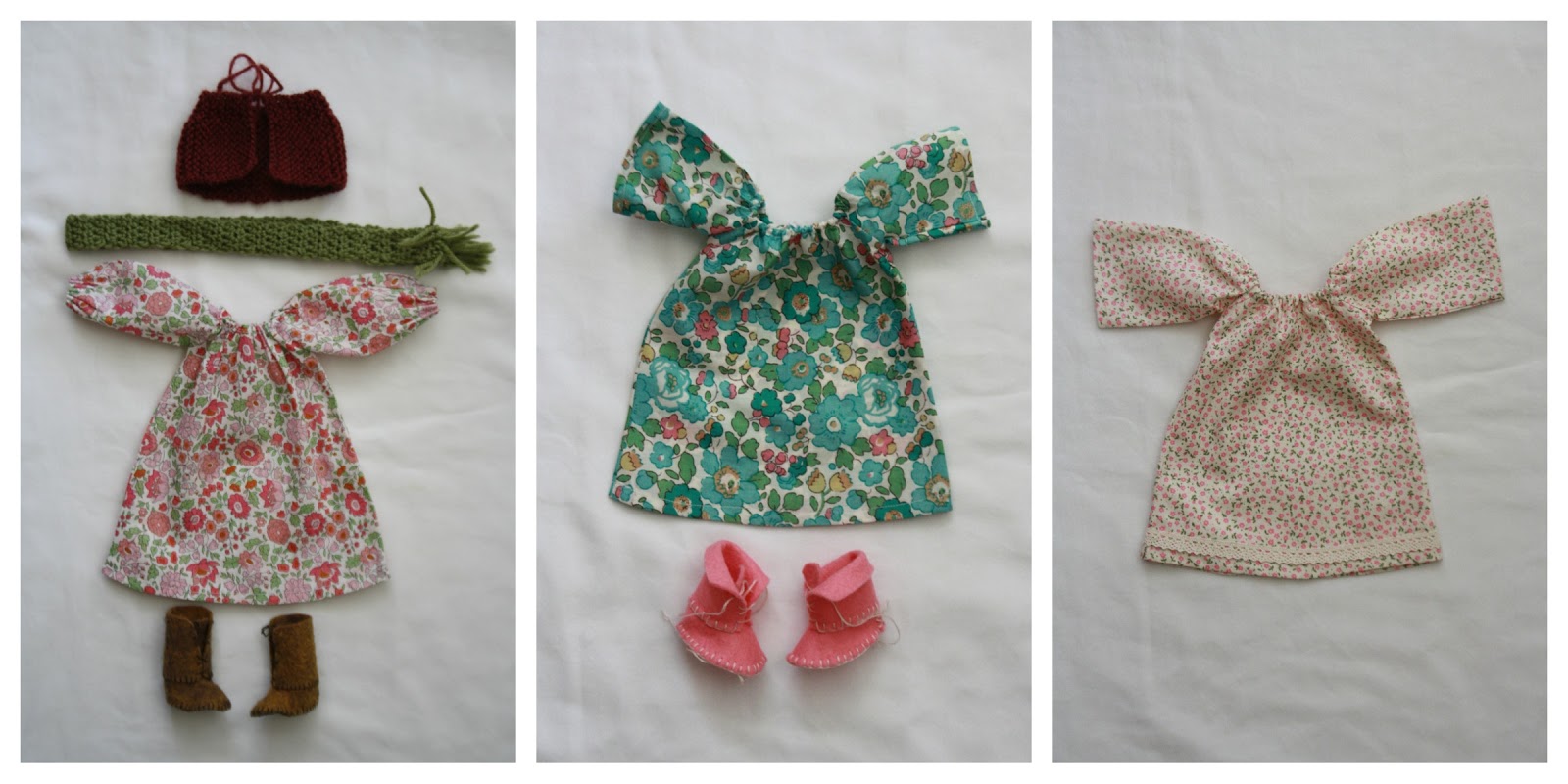 She already had the dress, boots and cape she came with and we added a green scarf to her winter outfit. 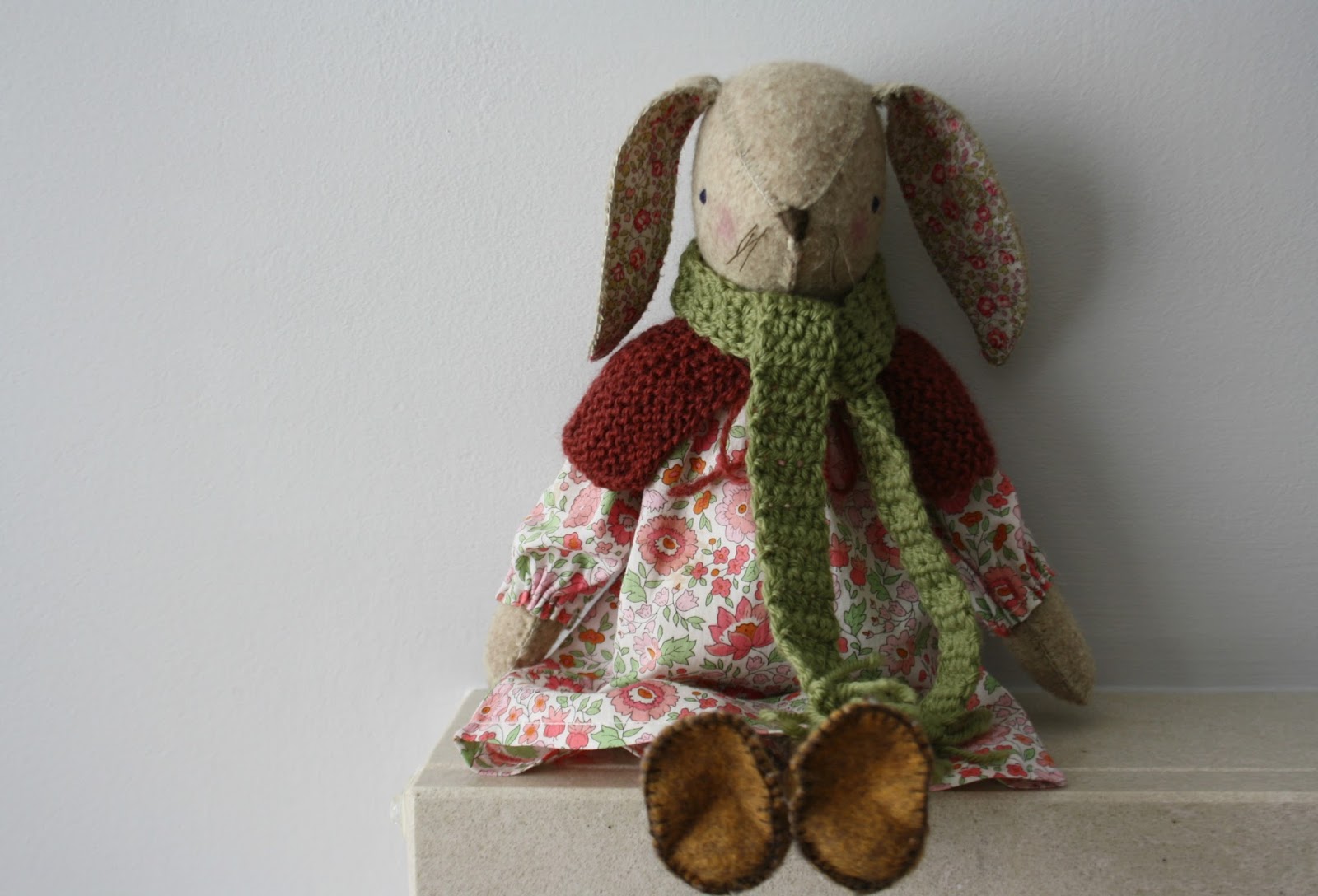 In addition, she now has a short sleeved dress for spring with matching pink boots... 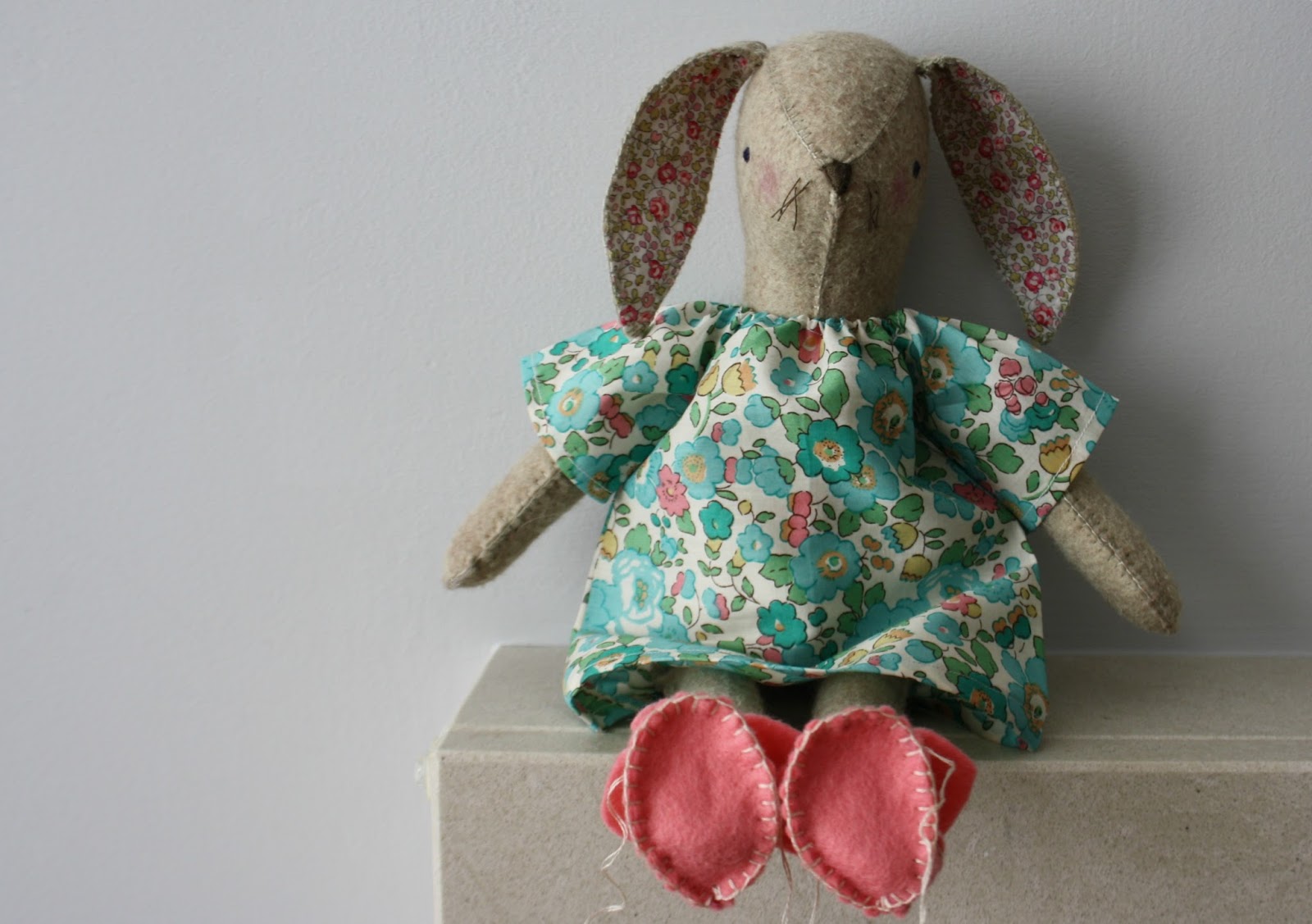 ...and a nightdress in some floral print fabric with a lace trim. I used the patterns that came with the dress and adapted them slightly. I noticed that Rosie Rabbit is starting to look a tiny bit bobbly, slightly less smooth than she was before. But since this is the result of much playing, changing of outfits and cuddling, I am not complaining.
. 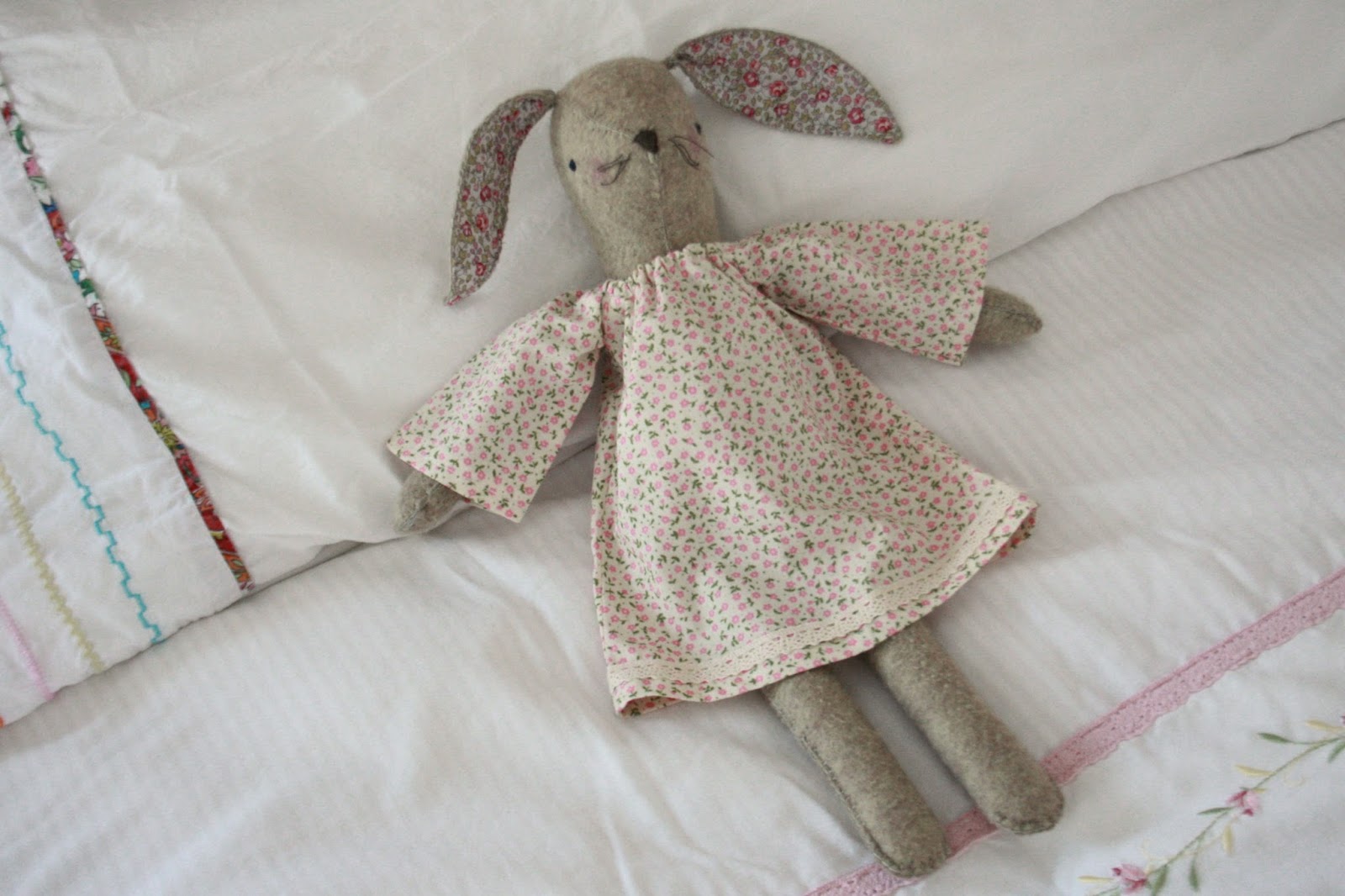 Now on to something for me: my lovely knitted cowl, made from a pattern and some gorgeous alpaca yarn which were purchased at Yarndale back in September last year. Oh my goodness, this cowl. I was on the last row and realised (duh) that I'd knitted the final third of the cowl completely back to front. I kept thinking to myself "It looks different" but put it down to changing the ball of yarn (maybe it was fluffier!) but no, it was my extreme incompetence. You can see the change clear as day where the arrow is. It was already full of dropped stitiches and you can see where my tension changed when I swapped needles (brands, not sizes) and also it's all bunched in the middle from spending two months squashed in the bottom of my craft basket. But still. All those hours. I will have to unravel it because I'll never cast it off, let alone wear it, in it's current state. 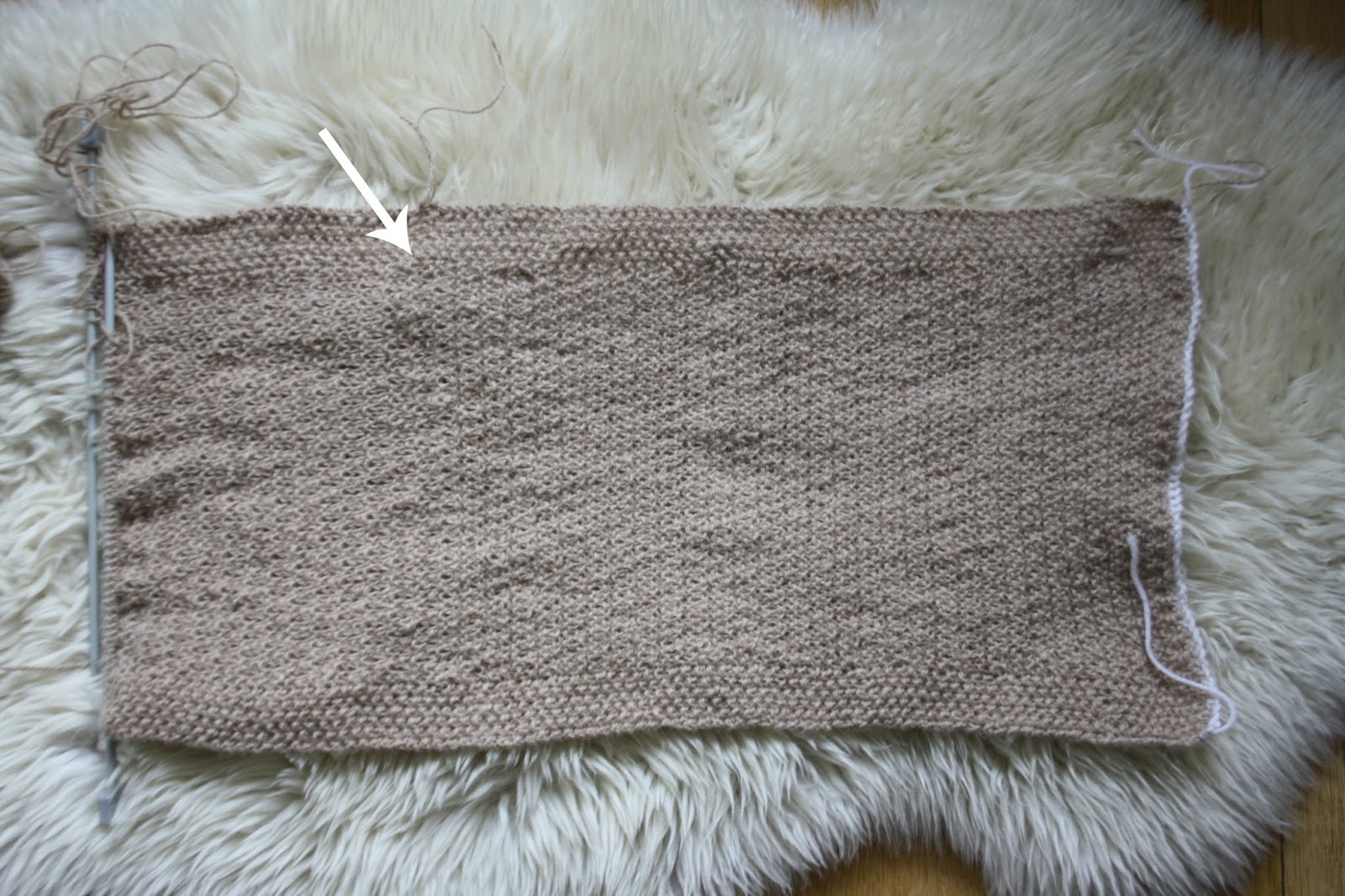 What I'll do with the yarn remains to be seen. I'm not sure whether I can face re-knitting the same pattern again, I might look for something else.

And finally, some crochet. I've shown you the colours already but these circles will become squares, and will end up in a cushion. It's working up quite quickly and I hope to finish it this week. 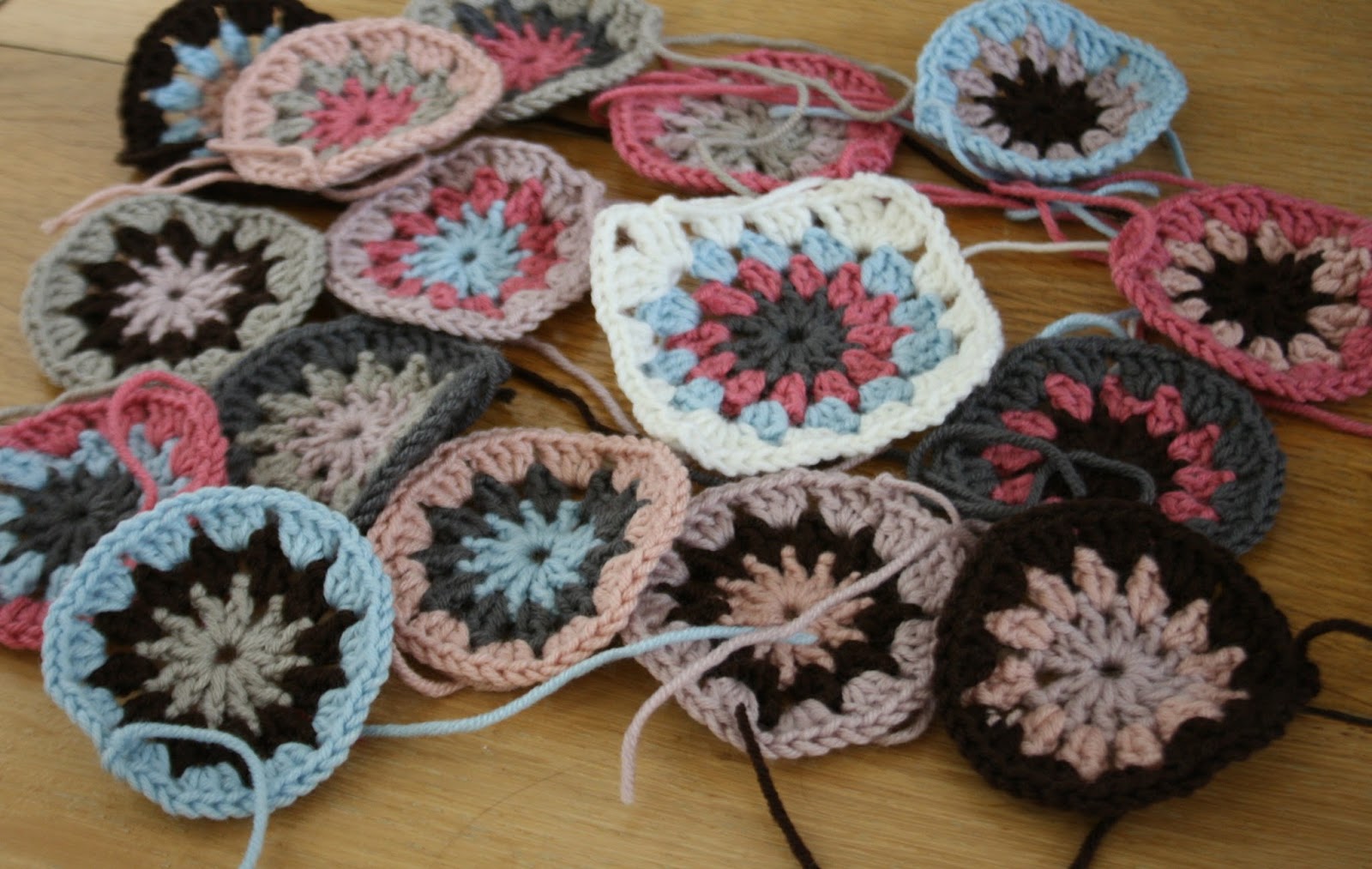 So there we have it, this is what I do during the dark January evenings while watching television. Unless it's The Bridge or Borgen, where I need to read the subtitles, of course.
Posted by Gillian Roe at Tuesday, January 21, 2014