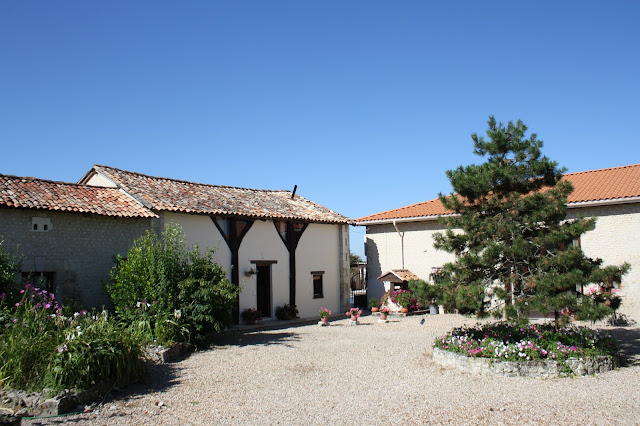 Hello! We are home, surrounded by washing, piles of post, overflowing in-boxes and general untidiness. It's cold, grey and windy here and quite autumnal. It feels as though these photos were taken much longer than a few days ago. I hope you don't mind me sharing a few pictures of our break. It helps me continue that holiday feeling for just a few more days... 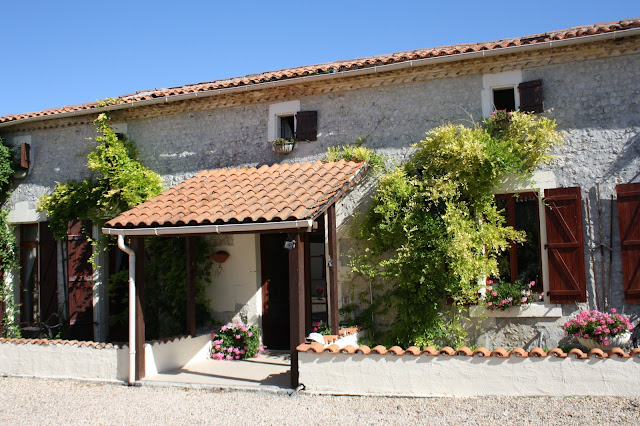 We stayed in the Charente region of France, near a town called Barbezieux-Saint-Hilaire. It's wine country, with fields filled with vines, sunflowers or maize. Our home was a charming old farm house with two converted barns. The owners live in one building and have their own pool and the other two buildings and second pool are for guests. Think low doorways, creaking floorboards and huge inglenook fireplaces. It was more space than we possibly needed - we had reception rooms that were never used - but the kids had a huge amount of fun riding their scooters up and down the metres of tiled floor. 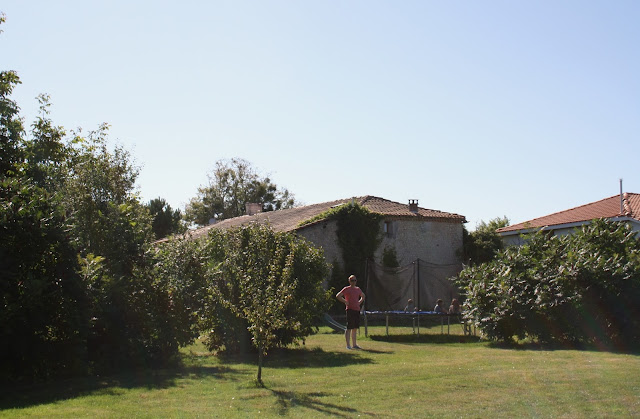 We settled into a routine of going out first thing after breakfast and spending the morning browsing local markets or going for walks or paddling in the lake, then coming home for lunch and an afternoon by the pool. Lunches were long and indulgent - as they should be on holiday - and often went on until three pm. 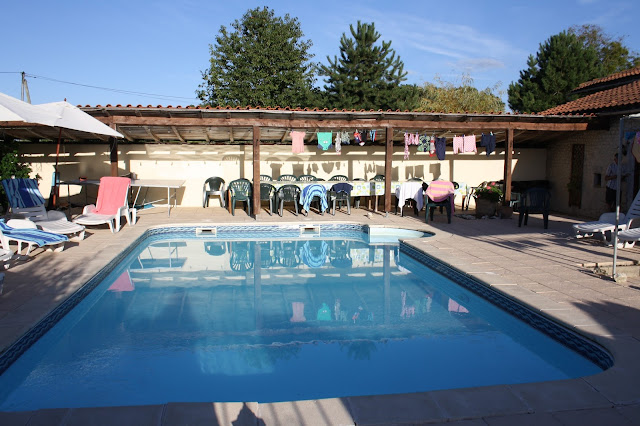 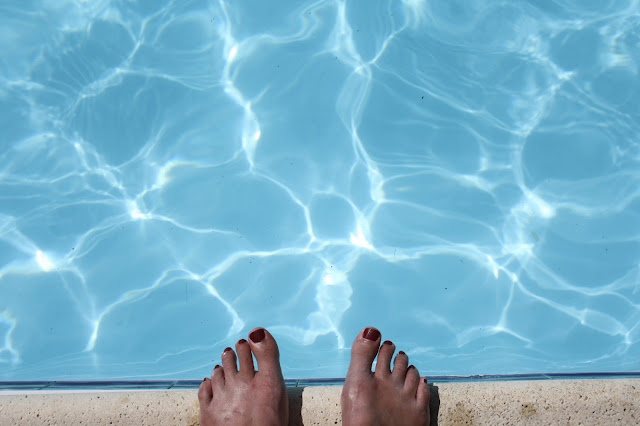 The children - Bella and Angus, and their cousins Alicia (5), Jennifer (5), Jeremy (4) and Eleanor (3) - were in and out of the pool constantly. It was exhausting for the first few days but once they realised the pool would still be there the next day they relaxed more, and so did we. We bought these brilliant floats (the kids call them "noodles") which they tuck under each arm while they swim. 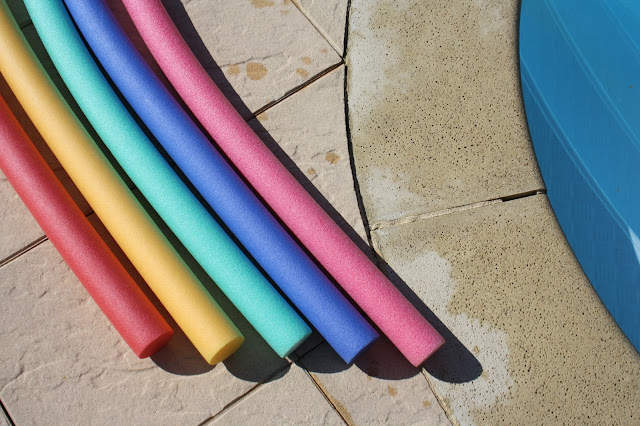 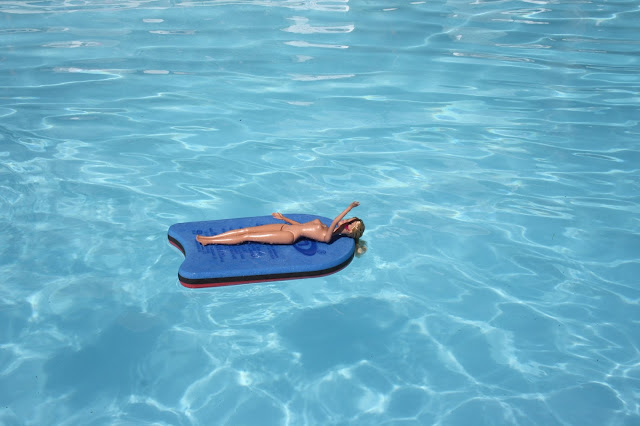 When the pool was too much for the little ones there was the trampoline... 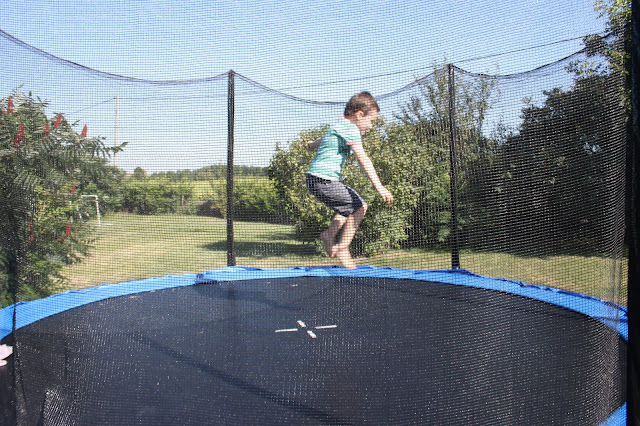 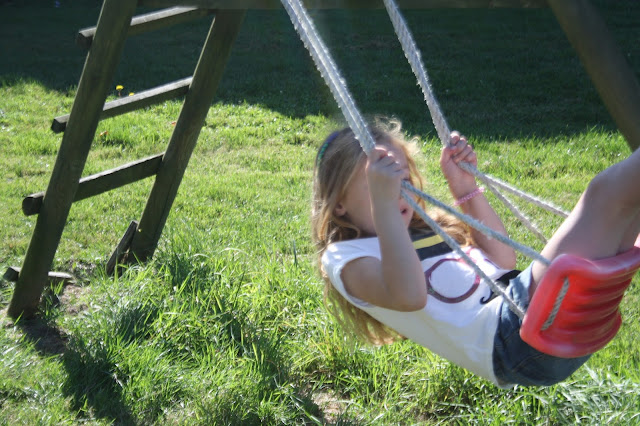 Skies were fabulously blue. I never tire of a sky like this, it lifts my spirits every time. 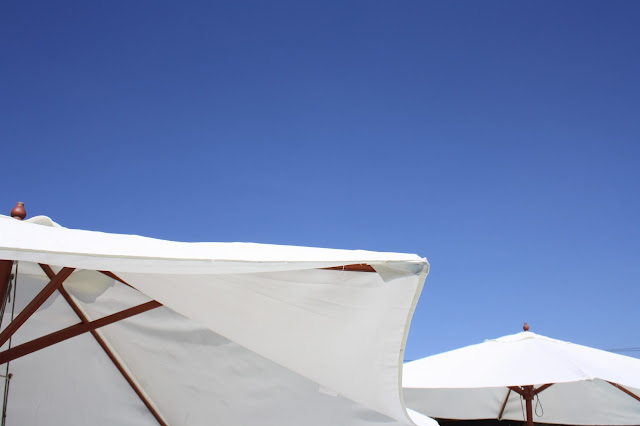 There were plenty of sun loungers, even if there wasn't as much time to laze on one as you would like. 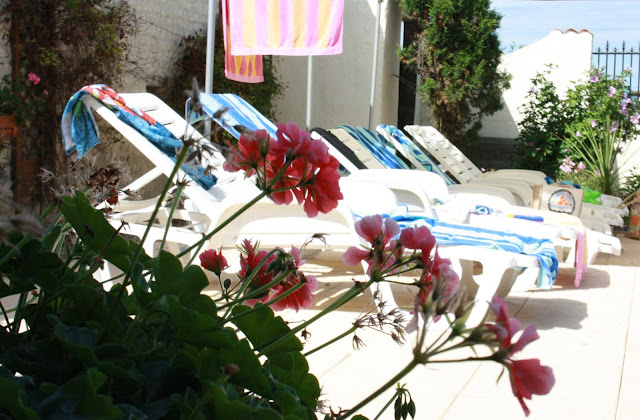 I bought this basket in a market on the first day we arrived and it became my pool bag, containing essentials like sweets, magazines and crochet. 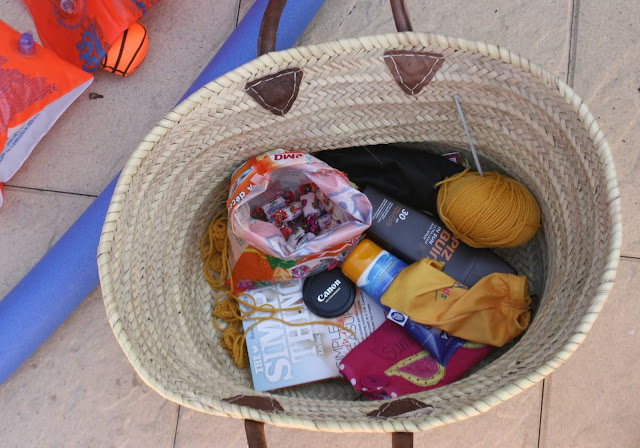 Sometimes there was Pimms. 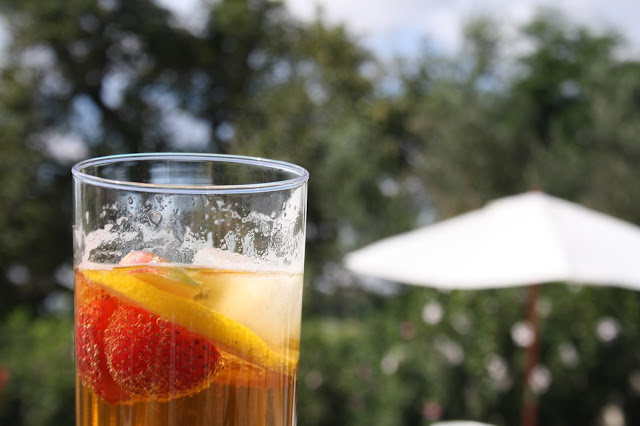 The evening was always my favourite time of day. I loved being out by the pool when it was still and quiet. 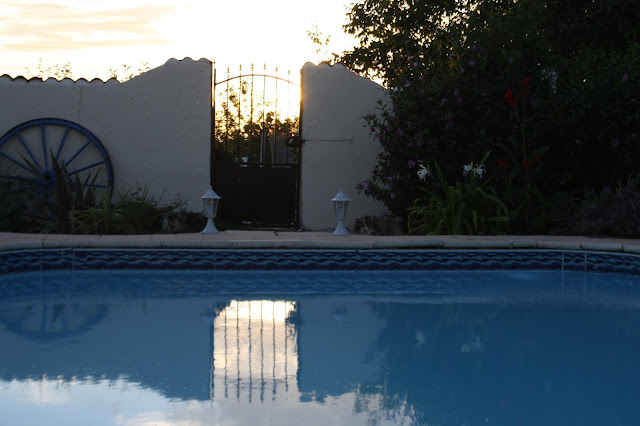 The sun was still very hot but the light was softer and so pretty. 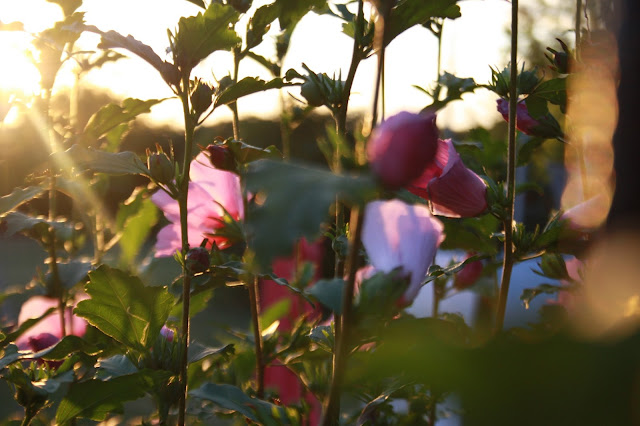 All the swim suits would be hung up, dripping in the late sun. 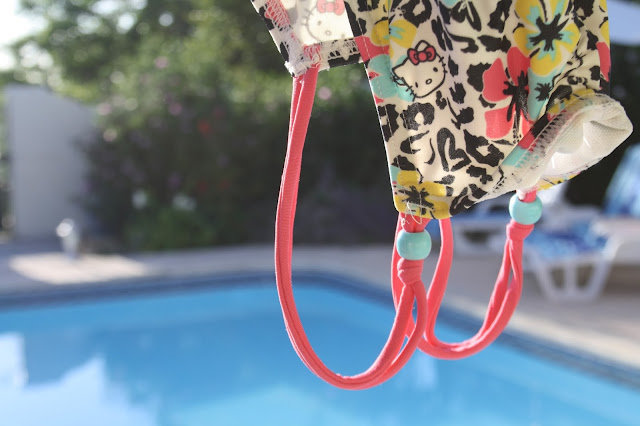 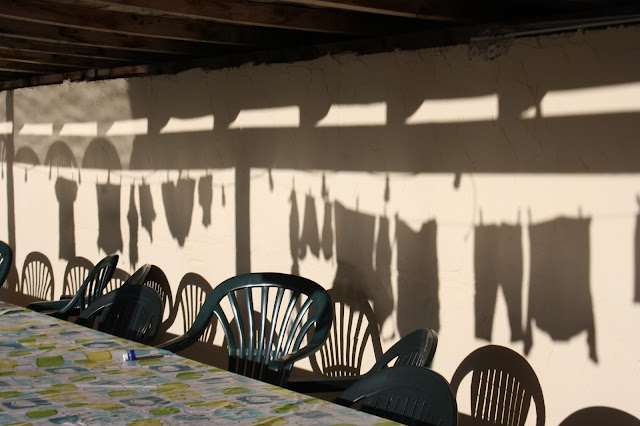 We'd give the kids their tea earlier, around five or six, then bath them and put them to bed (although they were usually wide awake for another hour at least, thanks to the sunny evenings and lack of blackout blinds or curtains in their rooms) then us grown ups would congregate in the kitchen, open bottles of wine and start preparing some food. We took it in turns to cook and ate late, staying at the table until long into the evening. We ate well. 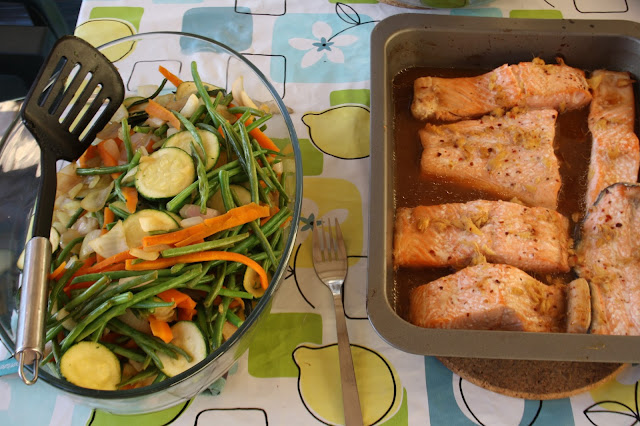 I love this photo. 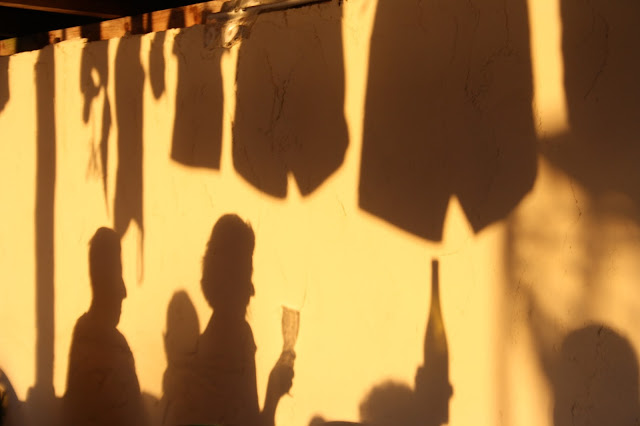 We'd stay outside for as long we we could, braving the mosquitos. 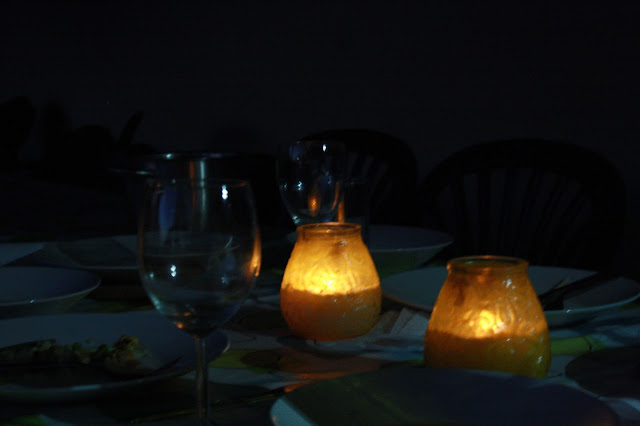 And admiring the truly spectacular sunsets. 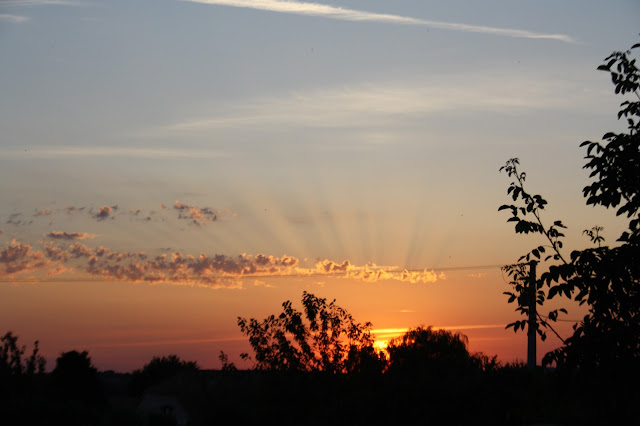 I have a thing about sunsets. When I see one I feel like I really need to take a photo of it. Does anyone else do that? I'm just captivated by them. Where we live in Leeds is very built up and hilly and you can never really see the sun setting from our house or garden. By the time the sun is low enough to be really colourful, it's long since sunk from view. But here, in France, the open landscape of fields made for the most incredible free open air cinema. 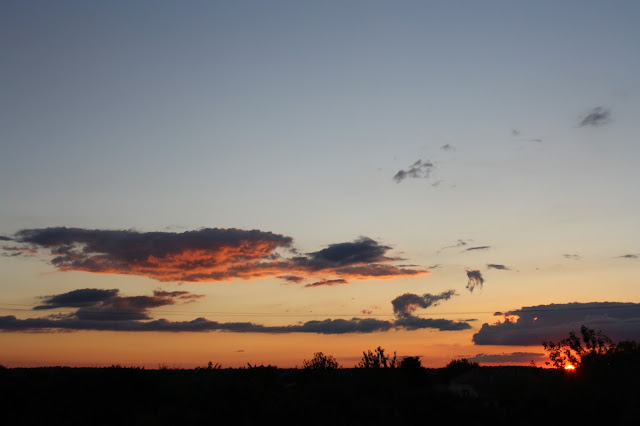 Thank you for indulging me. Tomorrow's post - out and about.
Posted by Gillian Roe at Sunday, September 01, 2013