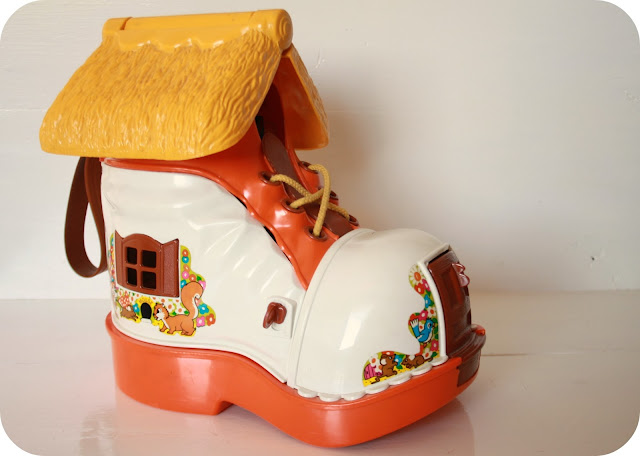 We don't have a great many vintage items in our home. A nice Meakin coffee set, my grandma's old Robert's radio and a few jugs and other bits - things that I've bought or have been given to me over the years - but not as much as you'll find in other homes. I love vintage things, furniture especially, but don't have the patience to scour charity shops, car boot sales, ebay and antiques fairs for that perfect piece, that amazing bargain. I know, it's a major failing of mine. I'm seeking help. 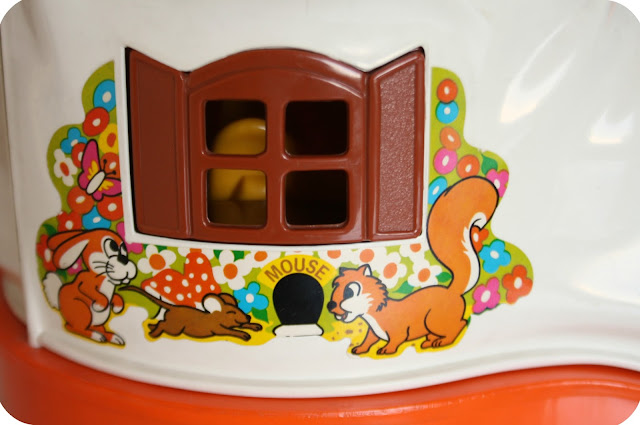 So this month's theme was a puzzle for me until, while staying at John's parents' house in Durham recently, I looked anew at this toy. Now, I don't know for sure when it was made but I'd guess it was in the seventies. I can't think when else brown, orange and yellow were used together so much and with such good effect. 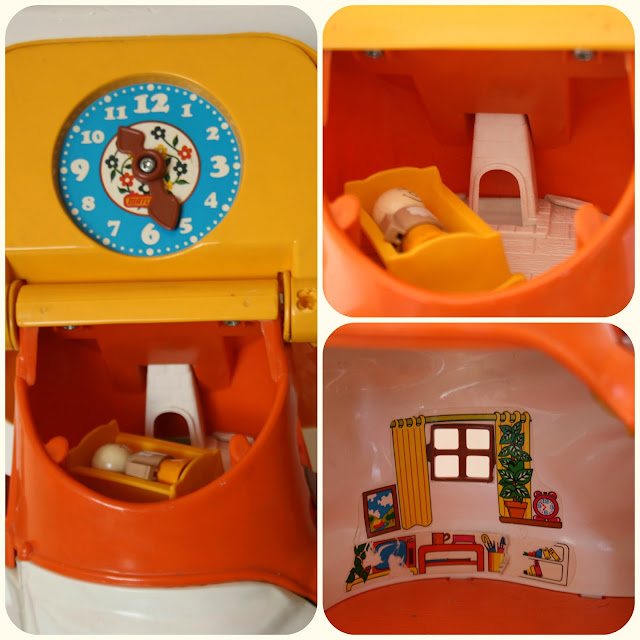 This boot-shaped dolls house was bought by my mother-in-law for a couple of pounds in a charity shop a few years ago, and is part of the collection of toys that live under the bunk beds in the spare room, ready to be played with by visiting grandchildren. It's seen better days and is missing a few pieces I think, but Bella and Angus love it and play with it every time we stay at their house. When I first saw it I had such a strong feeling of nostaliga. I don't think I ever owned this toy but I certainly remember playing with it, perhaps at friends' houses. 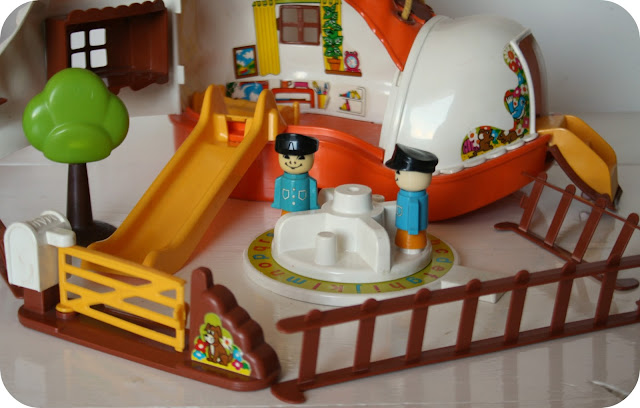 But what surprised me was when John's mum told me that he had one as a child. And when I looked for photos of the original box online, it showed a boy (in a blue polo neck jumper) playing with it on the packaging. That made me even more nostalgic because I think that if a play boot like this was on the market today (and I'm sure there are a few) it would be pink, purple and glittery. It would involve fairies and princesses and would certainly be marketed firmly at girls. That doesn't mean boys can't and wont play with toys aimed at girls, but I wish toys could just be toys, not "girls" toys and "boys" toys. It's everywhere once you start looking, this division between what each gender are told they should play with. 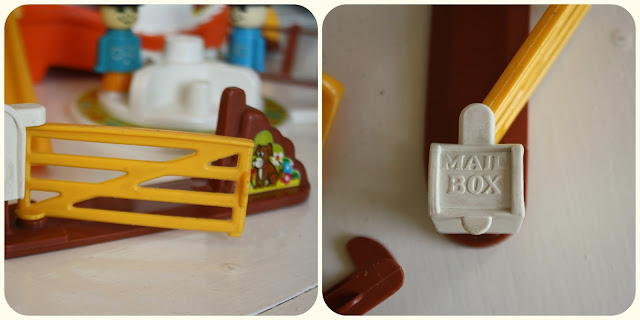 And it's hard to fight. You can avoid it when you have babies and toddlers; you can buy all the beautifully made, tasteful, gender-neutral, ethical wooden toys you like and your children will love them. But wait until they start nursery and school. I found that within a few months of joining nursery Bella was certain that pink was her favourite colour and suddenly knew the names of all the Disney princesses. She'd turn her nose up at certain toys or colours saying they were "for boys". At four, Angus happily plays with the doll's house, kitchen and shop and I hope he continues to do this for many years because, well, why shouldn't he?

I love the strength and boldness of these colours. They are vivid and assertive and fun, and just say "play" to me and nothing else. There is nothing insipid here, no pastel pink or blue. So there's another reason to buy vintage rather than new, if you needed one -  instead of toys marketed "for girls" or "for boys", we had toys that were aimed at children.

What is The Colour Collaborative? All creative bloggers make stuff, gather stuff, shape stuff, and share stuff. Mostly they work on their own, but what happens when they work together? Is a creative collaboration greater than the sum of its parts? We think so and we hope you will too. We'll each be offering our own monthly take on a colour related theme, and hoping that in combination our ideas will encourage us, and perhaps you, to think about colour in new ways. We're excited by where this might take us, click on the logos below to find out!