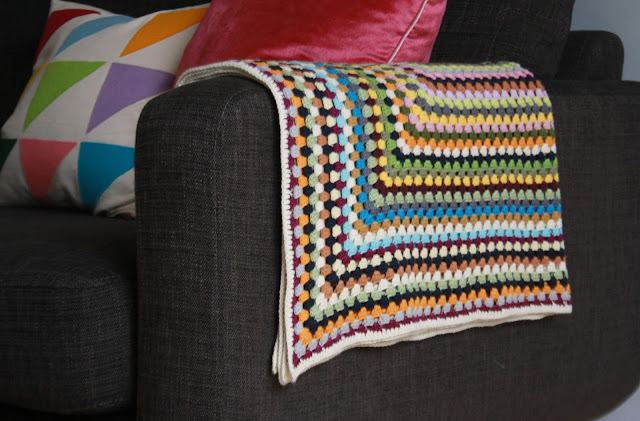 This throw has been many things; a stash buster, a lesson in colour and randomness, a lesson in planning seasonal projects and something to keep my knees warm throughout this cold spring. I enjoyed it, then I became bored of it, then I enjoyed it again. I liked the colours, I hated the colours. Now it's finished you'll be glad to know I like them again. Very much in fact.

The pattern is from issue 21 of Mollie Makes, an edition which has "Seasons Greetings!" on the cover, which gives you an idea of how long it's been sitting on my coffee table. I started it in February and, apart from a baby blanket and a snake, I've worked continuously on this project throughout these last four months. Is that a really long time or a not? I don't know. I tend to be a project finisher. WIPs annoy me, I like to start something and complete it. If things drag on I lose interest. But while crocheting this blanket it occurred to me that there is a reason why blankets take a year or more to make - you need other, smaller projects in between to maintain interest. And I mustn't always be in such a rush to finish - I need to slow down and enjoy the process more. For sometimes, when you are tired and there is something on tv to enjoy and you have a cup of tea next to you, there is so much pleasure in those rows of steady treble stitches. No pattern, no counting, just soothing trebles that go on and on for miles. 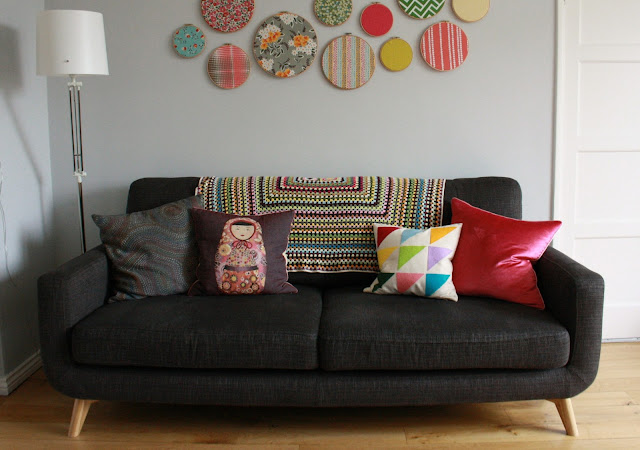 The colours were from a big bag of cotton yarn left over from two scarves and two baby blankets, a big mixture of different colours and lengths. I became obsessed with using every last scrap. I worked out how much yarn was in one treble cluster (about 30cm) and how many clusters were in a round, then calculated how much yarn I needed for a certain round, and measured how much I had left in each ball. (I'm not crazy, I just had to make sure I didn't run out of yarn three quarters of the way round!) And so the colour choices were genuinely random, for the most part. 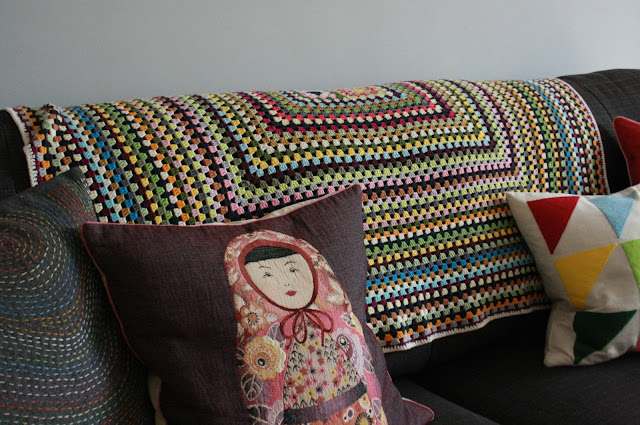 There are areas which are bright with pinks and purples, then areas which are predominantly green, then blue. It was in danger of looking quite sludgy at one point - I started calling it my swamp blanket - but I found some more purple and pulled in back from the brink. Getting the colours right is hard. One colour will impact not only on the colours either side of it, but on those two or three ahead as well. It's tricky to make that randomness pleasing to the eye.

The colours - those deeper, slightly retro, muted tones I seem to favour - work in our house. 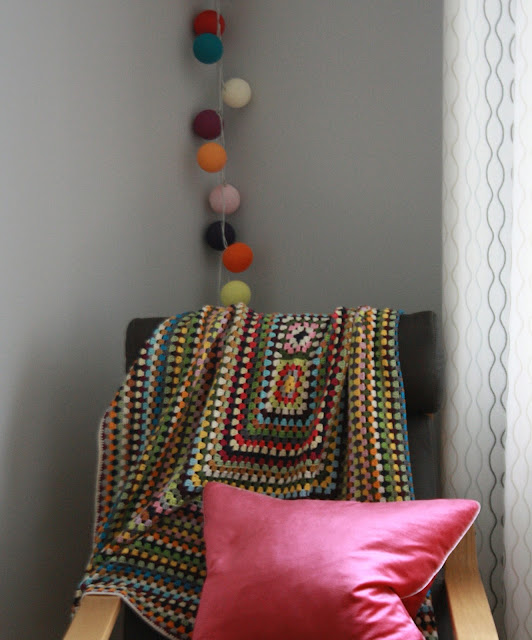 The border was a pleasure because when you're working on a border you know the end is in sight. It's just treble stitches crocheted into the top of each individual stitch and chain space. I like the crisp definition it gives the edge of the throw. 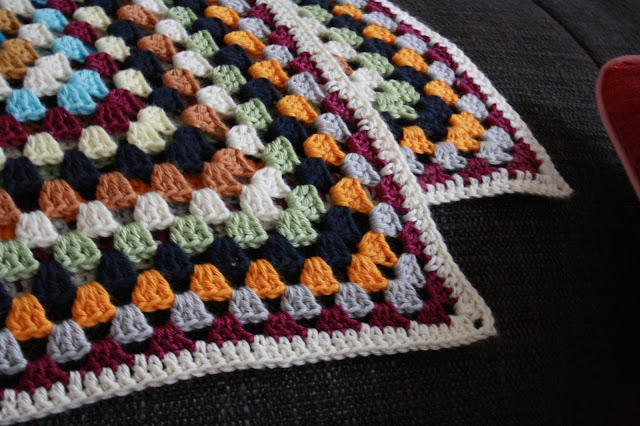 It looks great in our living room and it's home will be here, thrown over the back or arm of the sofa, or folded like this. It is not huge - it measures 105cm by 120cm, so definitely a throw rather than a blanket. The wonderful thing about cotton is how it is soft and lightweight but also very warm. Perfect for keeping the chill off one's knees during the British summer. 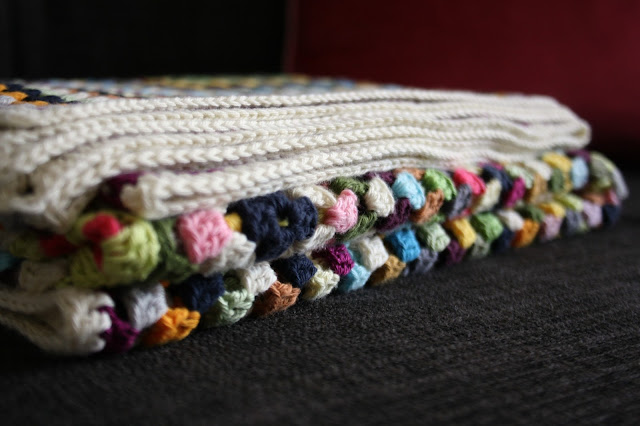 Also - blocking! It makes such a difference!  This image below is of the blanket unblocked. See how the middle purple-edged rectangle is wonky and tilts in a clockwise direction? And how my corners are annoyingly pointed and twisty? (I have no idea why that happens) 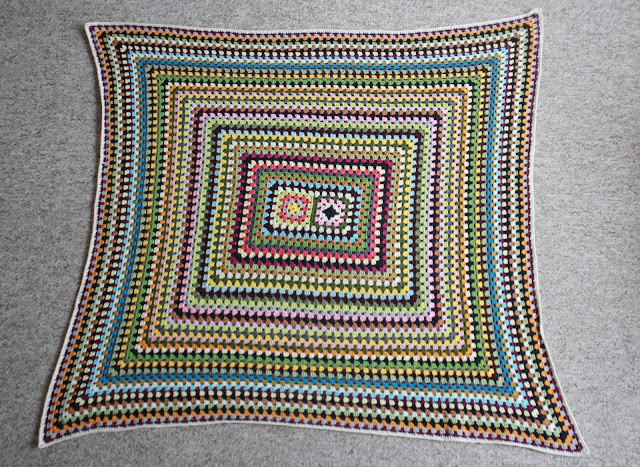 This is the throw while being blocked - it is damp and pulled into submission with pins. 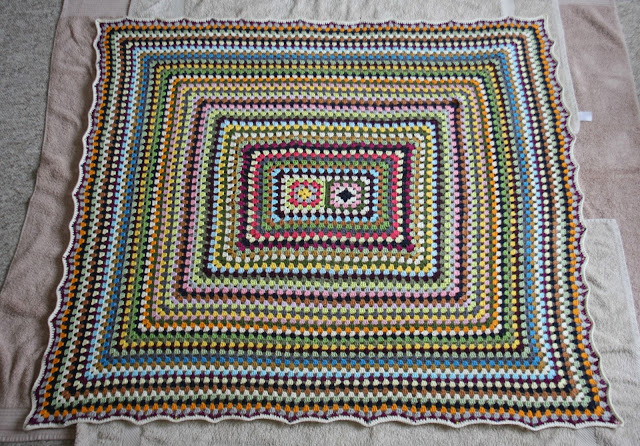 And after blocking. It's not totally perfect but see how the inner rectangle sits straight and the edges are more straight and even? 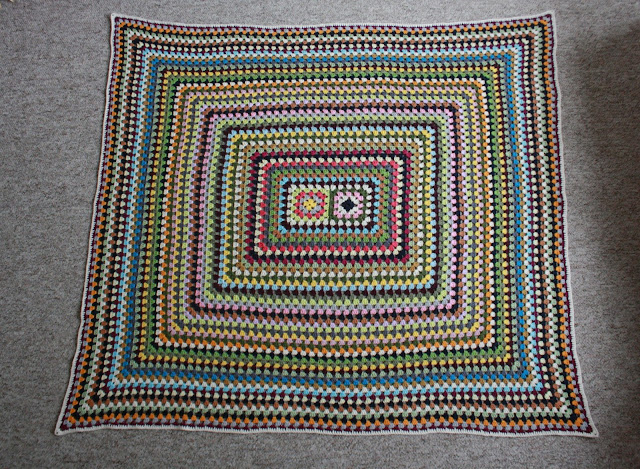 And something magical happens to the weight and drape of a blanket after blocking. It just feels lighter and softer somehow.

I've gone on long enough. I hope you like the throw as much as I do.