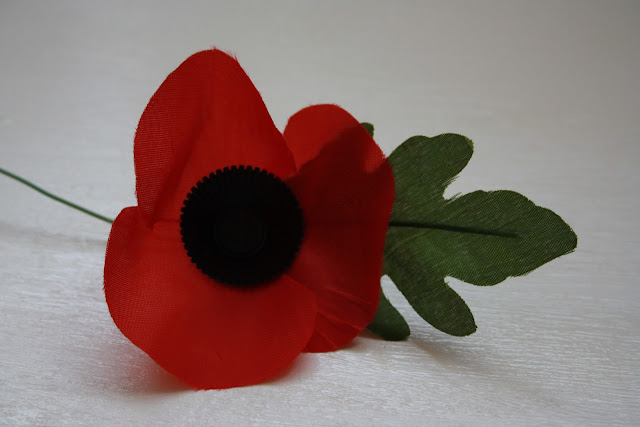 I wear my poppy* for lots of reasons but mostly because it makes me think of my Grandpa**. He died almost five years ago, when Bella was one. Of course I don't need a poppy to think of him - I think of him very often. We have photographs of him around the house and he is always alive in family conversations and memories. But I deliberately buy and wear a poppy every November; it is my way of honouring him. Like many men his age he fought in World War 2. A navigator in the Royal Air Force, his plane was shot down into the sea of the French coast. He and his pilot were rescued by French fisherman then handed over to the Germans. He was then marched, with others, across Europe to Poland where he spent the remainder of the war in a prisoner of war camp. He endured things I can only begin to imagine and his war experienced shaped him in numerous ways. Some he talked about, some he didn't.

I don't talk about politics much here - it's a very personal and divisive issue. But I am thankful every day that I live in a democracy and have the right to vote and my Grandpa helped defend that right.

Bella is very interested in why we wear poppies and children at her school have been encouraged to bring in a small donation in exchange for a poppy. We've talked (gently) about the armed forces and war and why we believe it's important to remember those who have died for our country and to think about those who are fighting right now.

* It is customary to wear a poppy in the UK at this time of year to commemorate Remembrance Day, which falls on 11th November every year. A small donation of any value buys you a little paper poppy which you can pin to your coat and all proceeds go towards The Royal British Legion.

** He was the best Grandpa ever. He had a beard and smoked a pipe and loved gardening, cricket, and his family. He doted on my sisters and I and some of my happiest childhood memories are of time spent at their house.
Posted by Gillian Roe at Sunday, November 11, 2012