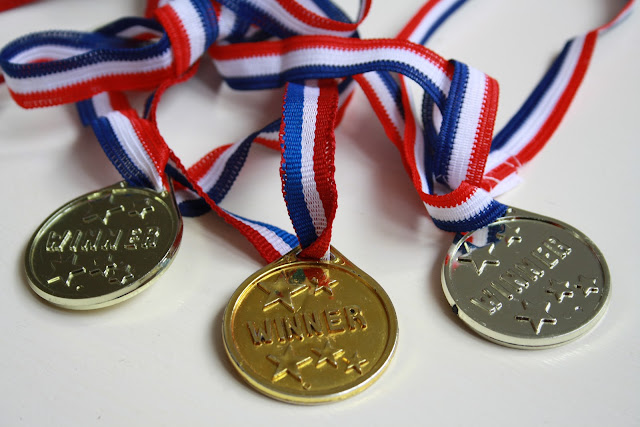 A month ago, if you'd asked me if I was going to watch any of the Olympics, I would've shrugged and said maybe some, we're not that bothered to be honest. Fast forward two weeks and Olympic fever has well and truly gripped our household. John, who admittedly loves watching sport, especially football, cricket (and American football, baseball and ice hockey for some reason) claimed he hated watching athletics and wasn't going to watch any. Ever. Well, all week he has been watching the (excellent) Olympic coverage on the BBC and has been jumping on the sofa and shouting and cheering at the TV with the best of them.

I am loving the Olympics. It helps that London is hosting and some of our friends have tickets so there has been lots of talk about it. The opening ceremony was fantastic, celebrating  British people and storytelling and history, all with a sense of humour. Bella told John this morning that when she grows up she is going to win gold in a "running race". Angus is fascinated by any events involving boats, bikes or horses and stands right in front of the TV, captivated by them.

So, go team GB! Fourth in the table so far, that's pretty good for such a small (although admittedly densely populated) island. Are you watching the Olympics Games? Are you enjoying it? Its taken over most TV and radio here in the UK - what is the coverage like around the world?