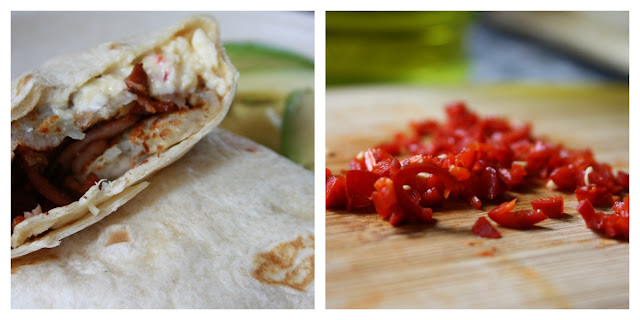 I've resurrected my weekend breakfast posts, partly to continue the holiday feeling (after all, John doesn't go back to work until tomorrow) and partly because I'm fed up with toast and jam. Again. I intended to publish this post this morning but the pesky internet connection has not been cooperative so I am doing it now. A bit late for breakfast I know, but technically it's still the weekend.


This breakfast was John's idea, and without wanting to stereotype too much, I think this is quite a "male" breakfast. Meat? Check. Eggs? Checks. Potatoes and tortilla? Check. Total absence of fresh vegetables? Check. According to my research, it is New Mexico dish, intended to be portable so that hungry ranchers, truckers, ski bums and snowboarders could grab one and eat it, wrapped in foil, on the go. And it is apparently the chillies that set it apart and make it a true breakfast burrito rather than just a lot of bacon and eggs wrapped in some bread.


You need (for two people): 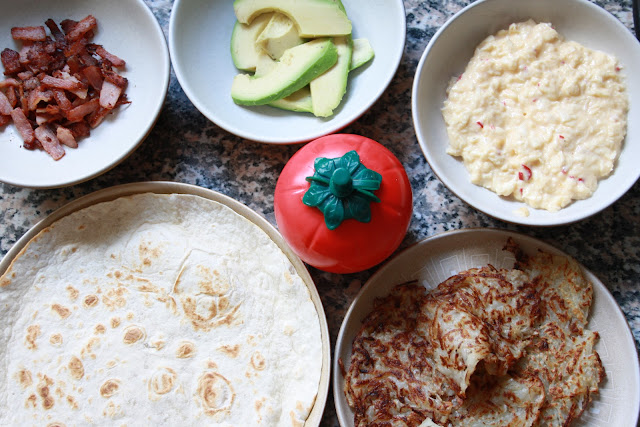 I ate mine with avocado on the side as I thought the whole concoction needed something resembling a fresh vegetable. John ate his with ketchup.

The verdict? It is filling. Boy is it filling. Definitely a brunch not a breakfast. I was still stuffed about six hours after eating it. I skipped lunch. I don't think it's for me, this one. This may be the perfect teenage breakfast, full of delicious, salty protein and carbohydrates but it was too much for me, weakling that I am. 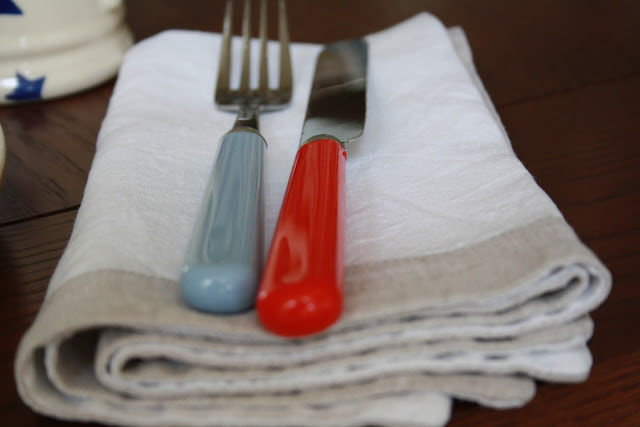 It's just occurred to me that this would make an excellent breakfast if you have a hangover. I always want huge portions of salty, greasy, starchy food when I am feeling worse for wear (which is never, Mum) with a bottomless cup of tea.


One last holiday photo...Bella's hair when I tied it up for her bath last night. Look at those sun-kissed blonde streaks in her light brown hair. I wish my hair looked like that. I used to pay a fortune for those kind of natural-looking highlights. 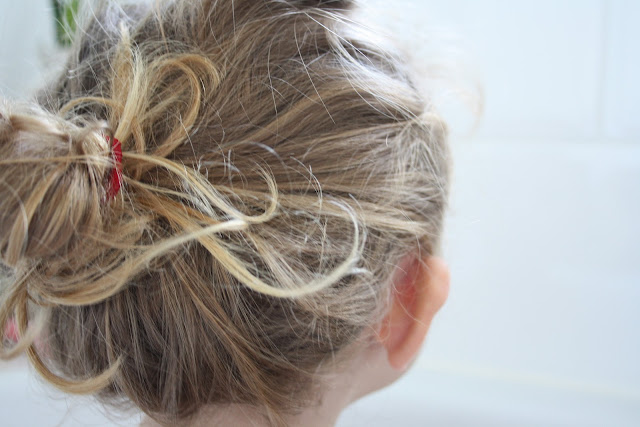 I hope you've all had a lovely weekend. We are settling into life at home, cooking, doing chores, inspecting the garden in between rain showers, and the children are happy to be back amongst their toys. Have a great week and thanks for reading. x
Posted by Gillian Roe at Sunday, July 29, 2012