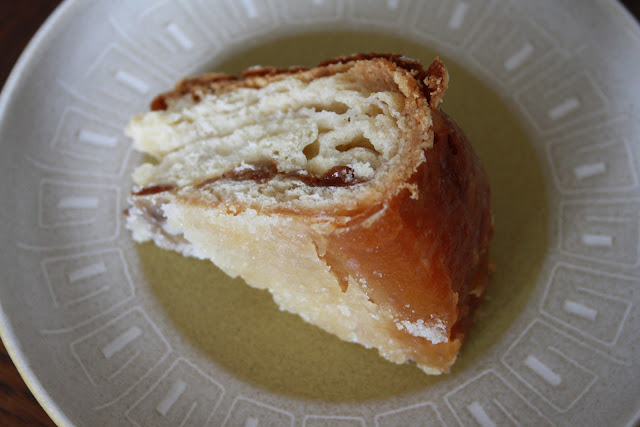 A recent visit to Emma Bradshaw's gorgeous blog prompted a trip down memory lane for me. Lardy Cake. Isn't that the best name ever for a cake? No messing, no fancy title, just a cake made with lard. When I was a child we would buy it from the local bakery as a treat at the weekend. I most associate it with going sailing, as my parents would often pack one to eat on the boat. I once asked my Dad why we so often did that and he said it was so full of fat, sugar and carbohydrate that it kept the cold wind out. Sort of like a nautical equivalent of Kendal Mint Cake, that high calorie snack people take on walking or climbing expeditions.

I thought everyone had heard of it, but I later realised that it is a regional thing. It's really a type of white bread from the South West of England, baked with lard, sugar and raisins, so that it becomes a doughy cake with a wonderful sugary crust. It was readily available where I grew up in Hampshire. I think it's fallen out of fashion a bit lately. Maybe that's because of the demise of the local bakery, as much as people not wanting to eat a lard and sugar laden bread!

So I thought I'd have a go at making some. The best recipe I could find was from The Fabulous Baker Brothers book. The recipe is on the Channel 4 website with a very handy video as well. I altered the quantities as the recipe on the website makes three cakes, which I thought was a bit much so I divided it by three then doubled it to give me enough to make two. It's pretty easy to make, you just need to allow time for the dough to rise at the beginning and the end.


and for the lard and sugar mix:
330g lard
330g caster sugar
plus extra sugar for sprinkling
Method:

1. Line 2 x 15cm cake tins or enamel pie dishes with greaseproof paper.
2. Knead the dough for 20 minutes (or 10 minutes in an electric mixer). Once you have a smooth and elastic dough nestle it back into the bowl and cover in cling film with no air gaps. 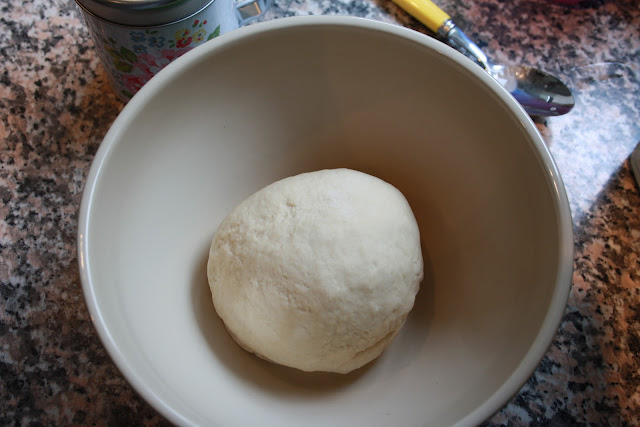 Leave it in a warm place to grow to twice its size or for 1 hour, whichever is first. 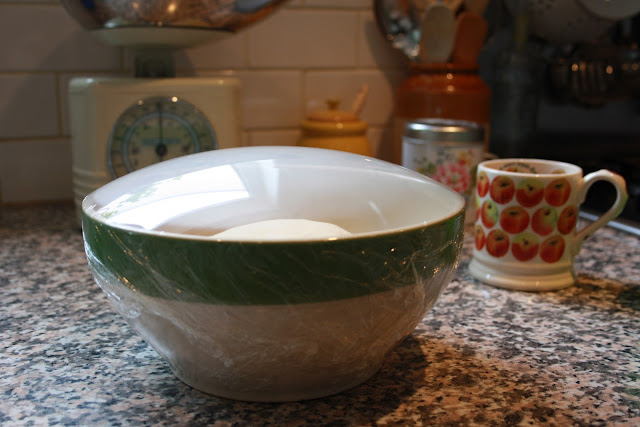 4.  Meanwhile make the lard and sugar mix by mixing them together until they’re combined in a mixer or with a wooden spoon.
5.  Divide the dough in half. Mould the dough into round shapes and then on a well-floured table, roll the balls out into discs.
6.  Using a pallet knife, spread a layer of sweet lard mix onto each disc. 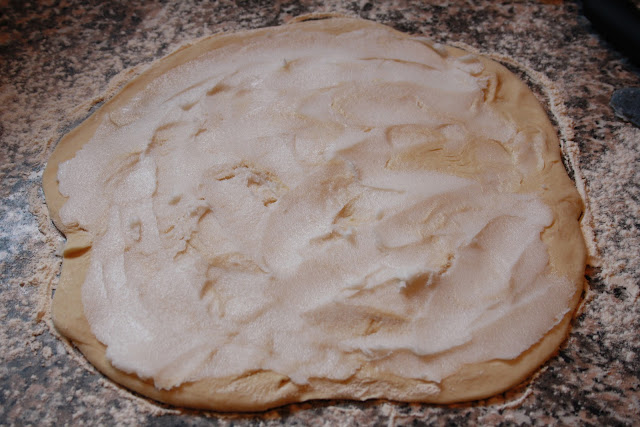 Then fold the dough; this requires you to take and outside edge and pull into the middle, your circle now has a straight edge with a corner at each end. Looking at it clockwise, take the bottom corner and pull the corner into the middle and push the dough down with your palm. 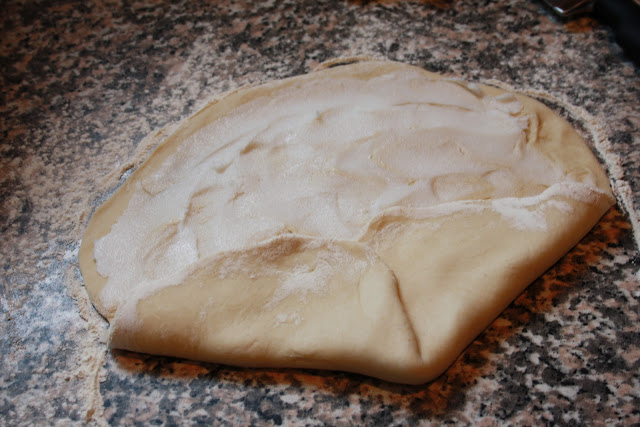 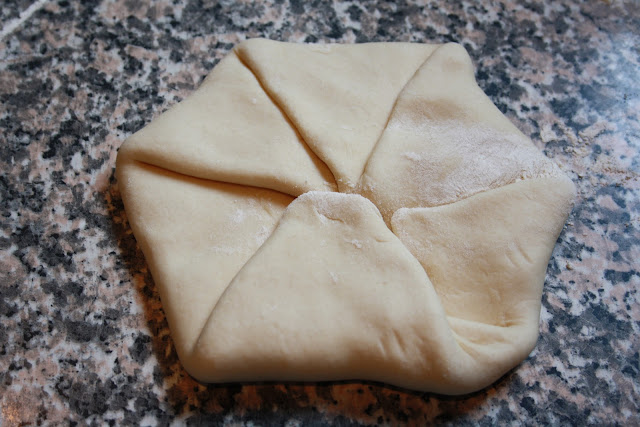 7.  Roll the disc out again and then spread more sweet lard mix on top. Sprinkle with some raisins and currants. (I used sultanas as I much prefer their flavour) 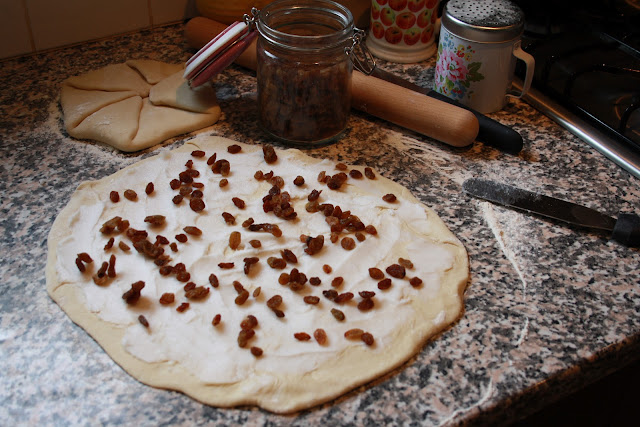 Fold as before, then roll out to fit your round cake tins.
8.   Put a big knob of the sweet lard mix in the bottom of each tin and spread it around to cover the bottom. Then sprinkle a generous tablespoon of sugar over the lard mix. 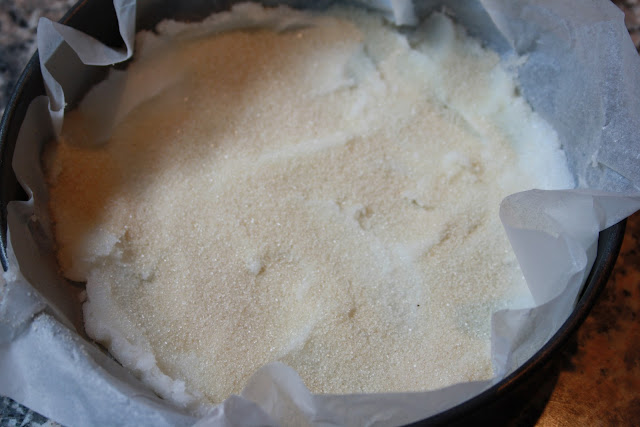 Place the dough on top, with the flat side on the bottom and the layered, knotted side on top. 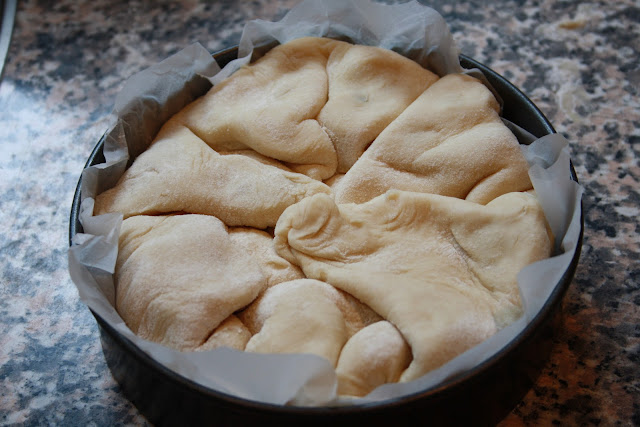 Cover and leave in a warm place to rise for 2 hours. 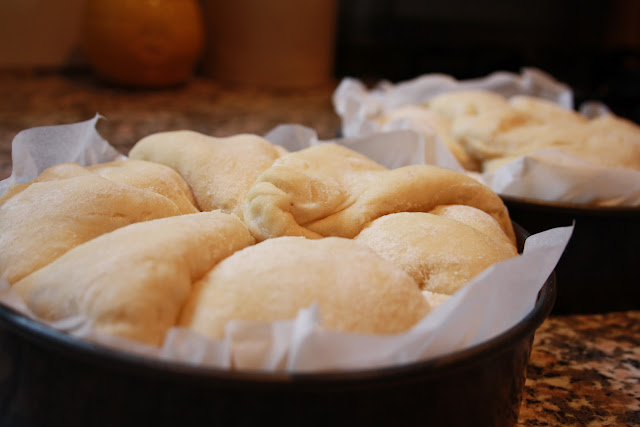 9.  After 2 hours, preheat the oven to 210°C/fan 190°C/gas mark 6½. Bake the lardy cake for 45 minutes until you can just lift the cake from the tin using the small pallet knife and the cake is golden all over. (If you bake yours in a sandwich tin, like I did, put a baking sheet underneath to catch any fat that drips through during cooking). 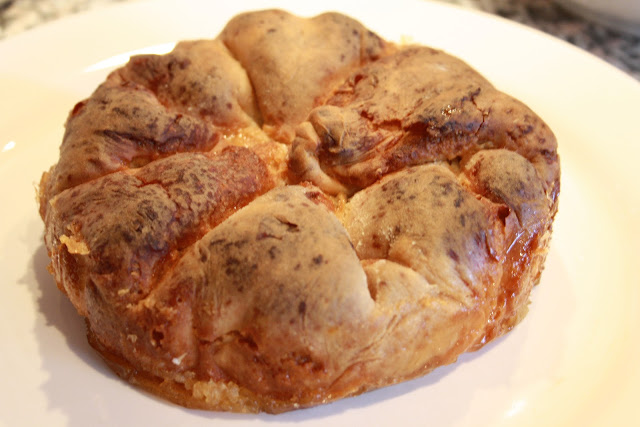 10. Leave the cake to cool in the tin for half an hour until the caramelised lard toffee has set a bit. Then tip out onto grease proof paper and serve sunny side up. It's not a photogenic cake. As you can see mine is rather lopsided. 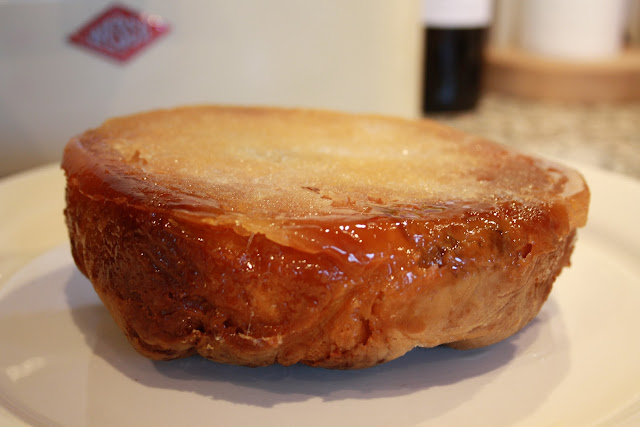 But oh, that caramel crust tasted just how I remembered. However, I do have one complaint...the smell of lard when it is cooking. I never use lard in baking (always butter)  and lard smells a bit well...meaty. It still tastes unbelievably good, but I think when I make it again (and I will definitely make it again!) I may try butter, and sprinkle some cinnamon over the sultanas before baking. 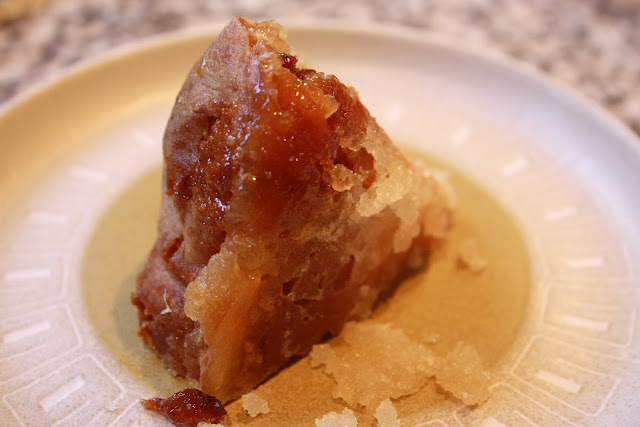